You wanna see something wild? 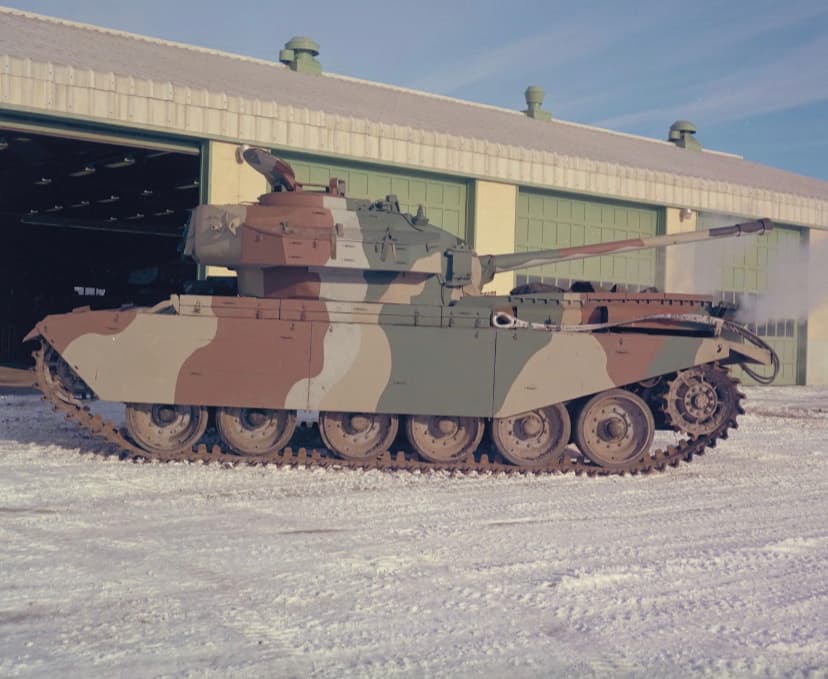 This is (hopefully) what I’m gonna end up with at the end of this build.

This is my holy grail shot. I’m glad I sprung for the reference stuff I did because now I can paint this beast with confidence… you know, after I finish getting my fingerprints all over it.

Yes ! That’s the one I’m talking about. And these Centurions were in West Germany at the time ? Great pic!

Yes and no. Based on the building and the snow that shot is probably taken in Canada. I don’t have a caption for it other than it being taken in ‘67. The basic Mk 5 that I’m building were used in Canada as training tanks. The Mk 5/1 and later Mks were used in Germany.

Interesting project! Here’s a nice build on Scalemates for some inspiration

25 kits is a not a stash, it’s a major shopping spree when the favourite plastic pusher has a discount deal …

LOL it sure feels like a stash trying to get into boxes for moving!

But once I get access to sprue bros $8 shipping when I’m stateside my stash will grow fast. Many a kits I wanted but couldn’t justify shipping costs

Yeah just rub that in why don’t you…

Don’t go there. The stash will just keep on growing giving you a bad conscience.
Ask me how I know (or maybe don’t ask, just trust me …)

And this ladies and gentlemen is why I’d never make it as a cosmetic surgeon. 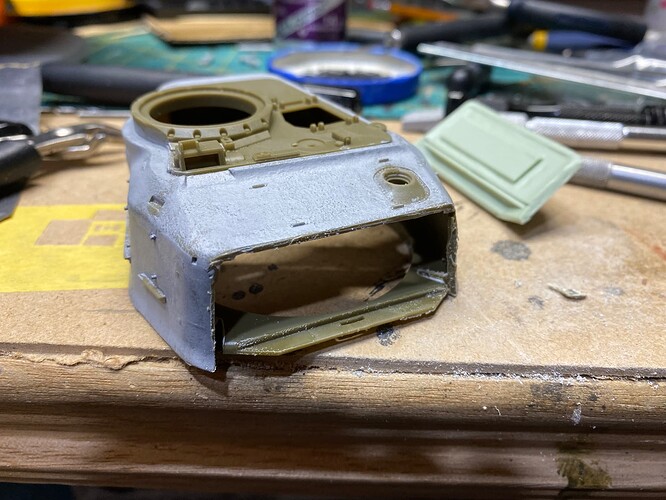 Actually, all things considered I don’t think I did too badly. 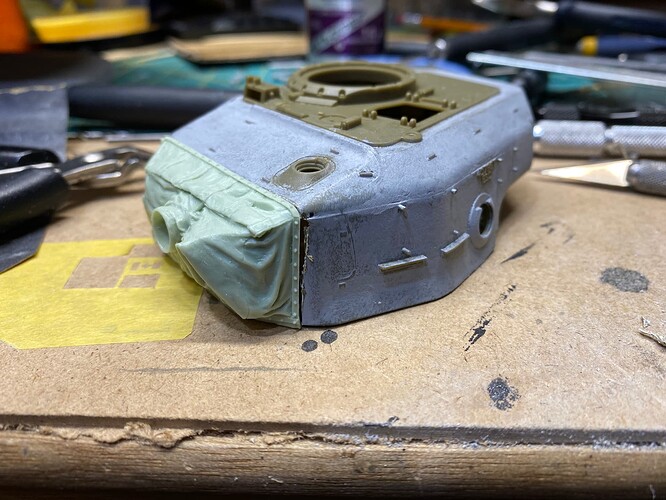 Gap is even less on the other side. Pretty sure I can build that up with some two part putty and you’ll never (really) notice the difference. Nice thing about the cast turret is it can be a little rough on the surface.

On the plus side, this DEF mantlet cover is gorgeous. Shame I can’t find a solid Canadian distributor because I’d buy more of their stuff in a heart beat.

Looking really nice. As soon as I am in the states I’ll be starting my centurion!

Any idea if that mantlet cover is good for a sho’t Kal? I imagine it is

Without having done any research, it should be.

What you’ll need to establish is what Mk your build is based on. If it’s 5/2 or later you’ll need the mantlet that accommodates the ranging .50 as well as the .30 coax. I’m pretty sure DEF make 3 different versions to cover various eventualities. This was completely worth the money though. The AFV Club vinyl one pales in comparison.

Installing it from the get go will also be substantially easier than having to butcher things with a Dremel.

Perfect! I’ll take a look, mine doesn’t have the ranging 50, just the coax!

Just for what it’s worth (which may not be very much at all!) making one’s own mantlet cover from Milliput isn’t as difficult as one might believe. Roll out as flat as you can, apply in small pieces - you can always blend it together with water later - and just work your way into it. Obviously you’ll have to note apertures for MGs and sights so good references are essential. I haven’t tackled it on a Cent but did manage it on an M41, which is probabaly equally complex.

On the comments about stash size, just after New Years, I hit kit number 600 in the stash. Now to keep my reply relevant to the post, I do have one Centurian in the stash. An Airfix 1/76 kit. I do want to someday get a Aussie Cent in my stash.

Got the turret taking shape.

Putty corrected the worst of my ham fisted surgery to get the mantlet cover on. Man was that thing worth it.

Also kills me that they give you half a dozen snap link tracks for spares but rubber bands for the tank. No matter because I bought some metal ones, but I’d have paid the extra money for them if a full set were included.

I have plans to build a Mk 11 in the future and I’m defiantly going to invest in one of the Voyager PE sets. It’s a shame they only make them for the IDF variants, but I think I can salvage a fair bit, especially for the stowage bins which are lacking in detail compared to what that set will give you. 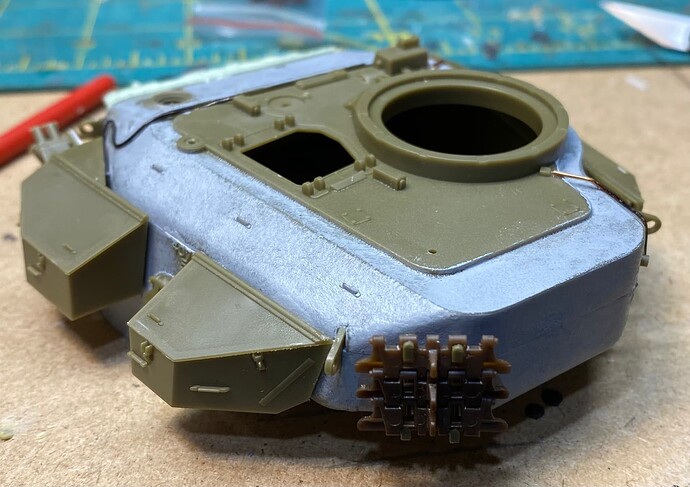 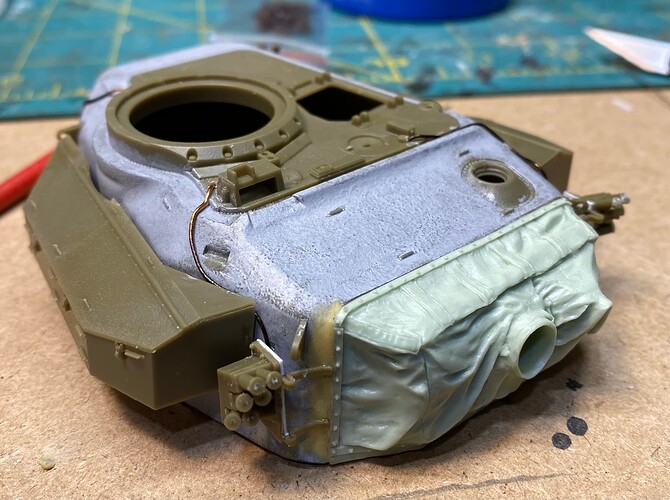 What sadist came up with this nightmare of masking… 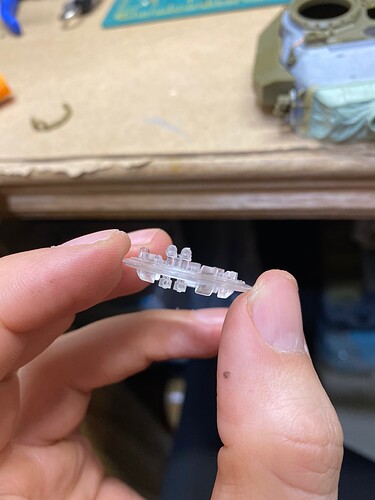