I agree with you there, red wrath seems to be an odd duck. It was a D model at manufacture but was possibly updated to have some features of a J for convoy hunting capabilities

Hmm I’m wondering if red wrath is actually a J and has been misrepresented. The description of a J is a hybrid mix of H and D models which is exactly what red wrath looks like

Definitely going with a Wildcat (unless I change my mind

), now the choice is between a Hobby Boss easy build Golden Wings F4F-3 or a new tool Airfix F4F-4.

Don’t want this to become a discussion on B-25s, but I can say that the 345th Bomb Group did a lot of work modifying their C/D Mitchells into strafers. The mods to the glass nose to mount several guns actually became an inspiration for the later factory made strafer Js. Red Wraith is indeed a B-25D with guns mounted in the glass nose and then the glass painted over with the parrot face.

Why not both?
The Hobbyboss can be done and painted inside of a week and then spend the time on turning the Airfix into a real show stopper! I picked one up a couple of weeks ago and it’s a fantastic little kit. They did a great job with that one, especially the folding wing option.

Perfect that’s all I needed to know! I agree, I’ll stop hijacking the thread! I’ll likely build the Corsair. Thanks for taking the time to reply to my inquiry

If we get the green light, I’ve decided to do Airfix’s A-4B with a centreline D704 Buddy pod, just to do something completely different. I think the pod was from Freightdog Models. 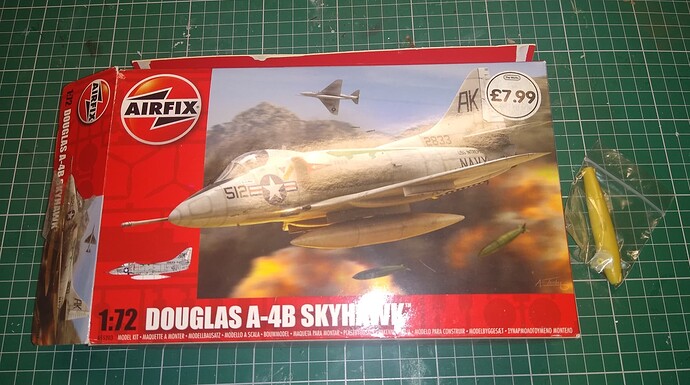 I’ve got enough Wildcats to try it, but the Hobby Boss won’t be that quick. It’s boxed as a -3, but the plastic is a -4. Removing the extra guns and wing folds should be easy, it’s re-sculpting the cowling that could take some time.

I’d be in with a choice to make of a Grumman J2F-2 Duck, an Avenger, or Blackburn Shark, and a CDN Sea Fury.

Industrially lazy. Pack the F4F-4 parts into the box, add the F4F-3 decals and call it an F4F-3. Don’t have to fork out for the extra tooling to do a 4 MG wing, 1 flap cowl, and add the intercooler inlets inside the cowling. I suspect that they do the same sort of stuff on their FM-1 & FM-2s.

Wouldn’t put it past them.
I think it might have been one of their first releases when they were just churning out those cheap quick builds. Is it the yellow wing version? I did it when it when it first came out and didn’t give any thought to accuracy.
Hope you can do something with it, if you decide to go that route.

Ultracast has a wildcat cowl for $9 Canadian and it’s listed as a fix for the hobbyboss kit, no idea if it’s for the kit you are using though, I just saw it in passing while browsing their site

Thanks, but it looks like the kit decals are for an early -3, one of the first 10 planes. So neither one will be exactly ‘right’. Per Squadron’s “F4F Walk Around”, the first batch had the P&W R-1830-76 engine with a cowl mounted carb intake, in the cowl mounted intercooler intakes and a single cowl flap on each side.
It’s a ‘fast build’ kit so the engine is molded into the cowling. I can leave the cowl air intake in place, sand off the 8 open cowl flaps, and scribe in the single flap on each side. I just have to finesse the the internal intakes.

I have an Airfix Blackburn Buccaneer that I would enter with.

F-14 Tomcat is waiting in my stash

I am in! Got both Hornets, Hellcats, and tomcats in the stash.

Any thoughts on making this official with start dates and all?