Wasn’t able to find this anywhere in here so I started a thread. Brand new tooling 1/16 scale E8 from Takom via AHHQ. Please delete this thread if this was already addressed. 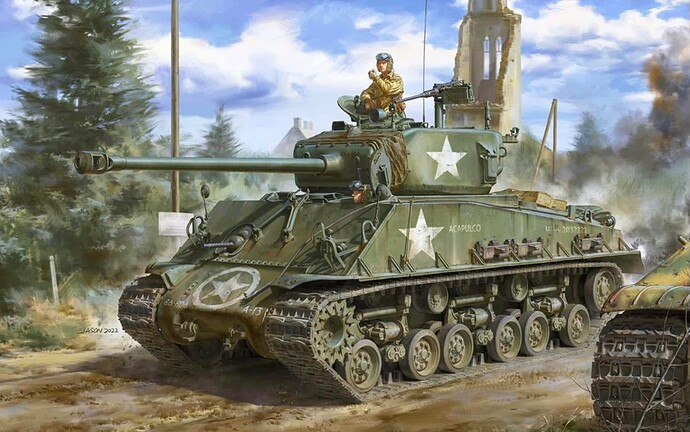 image1920×1203 206 KB
I think it’s supposed to come out in the next couple of months. Andy says in the video that the price will be under $150 and it includes a full figure, metal barrel, and workable tracks and suspension. Here’s the video: 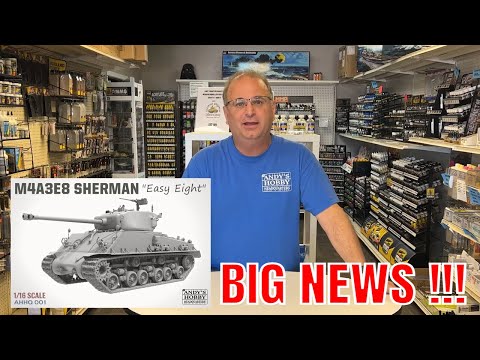 Interesting.
I’d like to see them (or Tamiya) do a 1/16th scale Sherman Firefly Mk Ic (Hybrid).
Whine, snivel, beg?

Very much into this. I thoroughly enjoyed the DW StuG III in big scale so will be adding this one.

After watching the video again I realized it also comes with the interior gun details.

For the longest time I never understood why Trumpeter never made the Sherman in 1/16 scale. I always told myself that if they ever introduced one I’d buy it. So now it seems two 1/16 scale Shermans will be released in 2022. This AHHQ/Takom and one from I Love Kit and both are M4A3E8s.

I’ve been away from forums and modeling news for a few years basically just focused on reducing my stash by building and selling/donating. So I’ve heard the I Love Kit version is a previously unreleased Trumpeter model?

It’s not a previously unreleased Trumpeter model. I Love Kit IS Trumpeter, just another branding like Hobby Boss.

Hoped for a firefly too but apparently it was considered too niche to be a profitable option. Seems theres 2 or more easy 8’s in the pipeline but nothing with the earlier suspension yet.

I find this so odd. Dragon kind of did this with cyber-hobby and then after the Tsunami Tasca became Asuka. I don’t understand how it benefits the companies to switch names like that.

Where’s it going to be available from ?
I know I want at least one , maby two.
Is there a interior ?

I’ll get one, and maybe two (anybody want to buy a kidney?). Lets hope they follow on with an M4a3!
gary

Andy says in the video that it’ll be a worldwide release and readily available from all the online shops that carry models. I think it’s toward the end of the video.

I’d imagine that with two M4A3E8 kits coming out simultaneously someone out there will make a resin interior. Heck Takom themselves might make an interior version later if this one sells well. The Trumpeter version (now called “I love Kit”) has a much higher price (~$290) so maybe theirs already comes with a full interior?

There are aftermarket resin hulls, suspensions (both types), and turrets for 1/16 scale Radio Controlled Sherman tanks including all metal workable tracks and such. So with some AM stuff you could potentially convert this into a M4A3 76mm or even 75mm.

It does look cool, but I don’t have the shelf space. Unless I move a car out of the garage…

I guess these kits were announced months ago and I’m a bit late to the party with this thread. I did find something interesting that I missed when all this was first announced. The modelling news posted sprue images of the “I Love Kit” version, it doesn’t have interior gun detail, the crew figure looks bad compared to the AHHQ version, both come with metal barrels but the ILK version also comes with a metal machine gun barrel. Here’s the link to the modelling news announcement:

The box art for the ILK version looks like something from the 1970s, maybe that’s what they were going for a retro box art look. I don’t like it, the tank looks disproportionate in the box art. 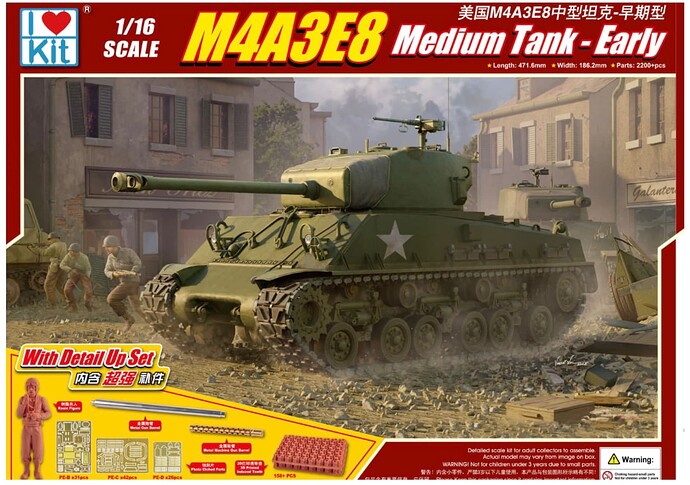 BTW, the Takom version will also include the dust cover. The tracks for the ILK version are more appropriate for a Korean War Sherman.

Almost certainly probably won’t be buying either of these, but I think if reason does fail me, I’d go the AHHQ version. Much simpler tracks being the real incentive.

Kettenkraftrad or a Schwimmwagen i reckon.

There’s already a Kettenkraftrad out there (even comes with a goliath…). So I hope we don’t see a duplicate. Tamiya has their kubel, but a schwimmwagen wouldn’t be too surprising. I’d put up a wishlist, but as it wouldn’t contain anything WW2 German, it really would be just a wish.

Pz II would at least offer some variety for the chassis use.

I agree the AHHQ version will be my choice.

A. It includes interior gun details.

B. The figure looks to be superior and plastic not resin.

C. Each track pad of T-66 workable track is made from two pieces.

Things I didn’t like from looking at the ILK sprues.

A. Split hatch early turret with T-80 track would be unusually rare. Those early HVSS M4A3s had the T-66 track, split hatch turret, and no muzzle brake. This model also doesn’t include the thread protector to model the gun without a MB. So it has the early turret with MB which is doable but then includes the final version of track.

B. The rubber dust cover. Perhaps it’ll work at 1/16 scale but at 1/35 scale dragon tried it like 20 years ago and they looked awful. Also it comes with rubber tires for the wheels and I’m not crazy about that.

C. Metal springs for the suspension might be feasible at 1/35 where the plastic weighs less but at 1/16 it could be an issue after a couple years on the shelf.

E. Probably because of the tracks this ILK version has 2,200 pieces to complete the kit and it lacks any interior detail. That’s a lot of parts for a vehicle without interior.

Yamato is my guess! Then we can all sail the globe together