ICM is showing in-progress pics of their upcoming 1/32 US Helicopter Pilots Vietnam set that is designed to go along with their new 1/32 AH-1G Cobras. They look pretty nice. 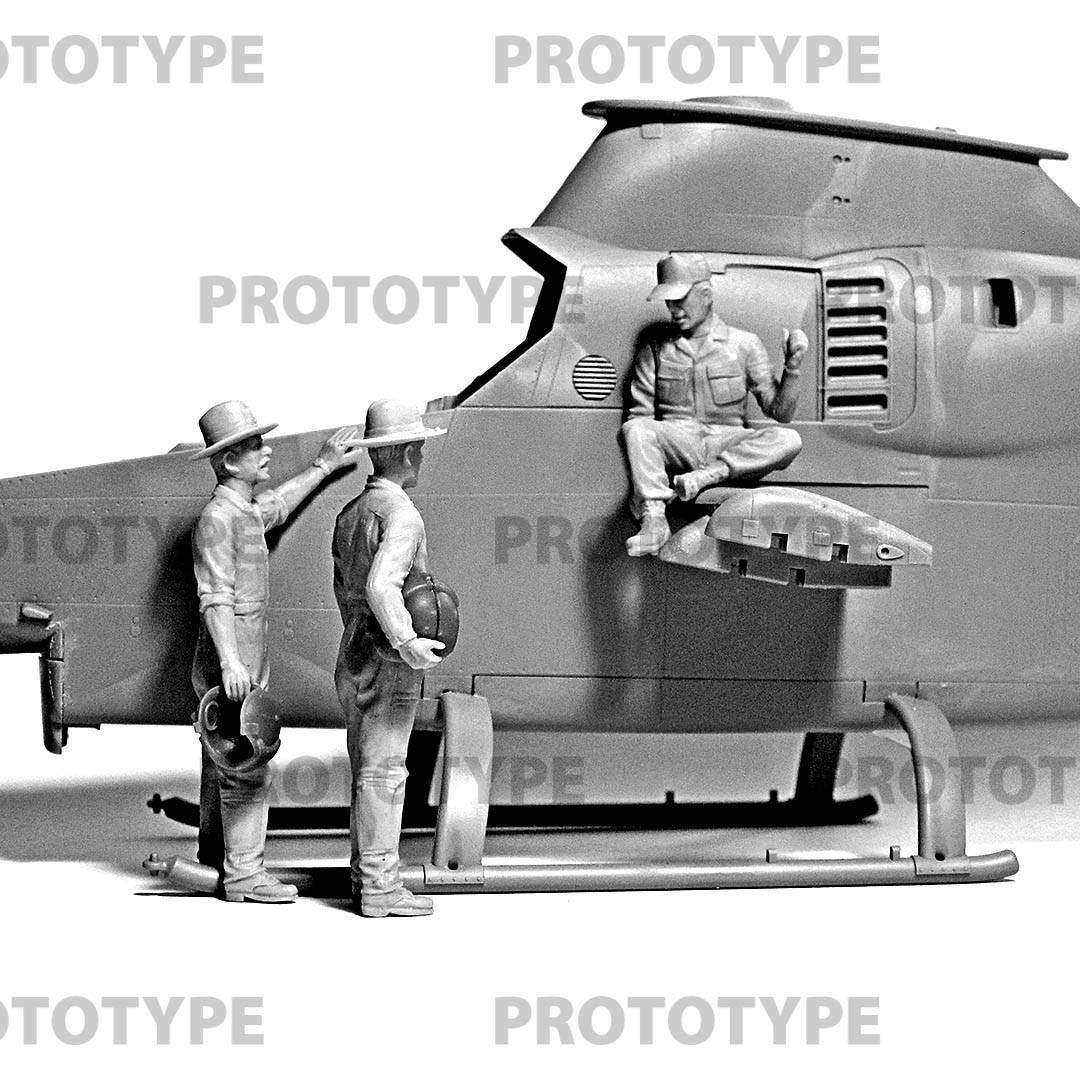 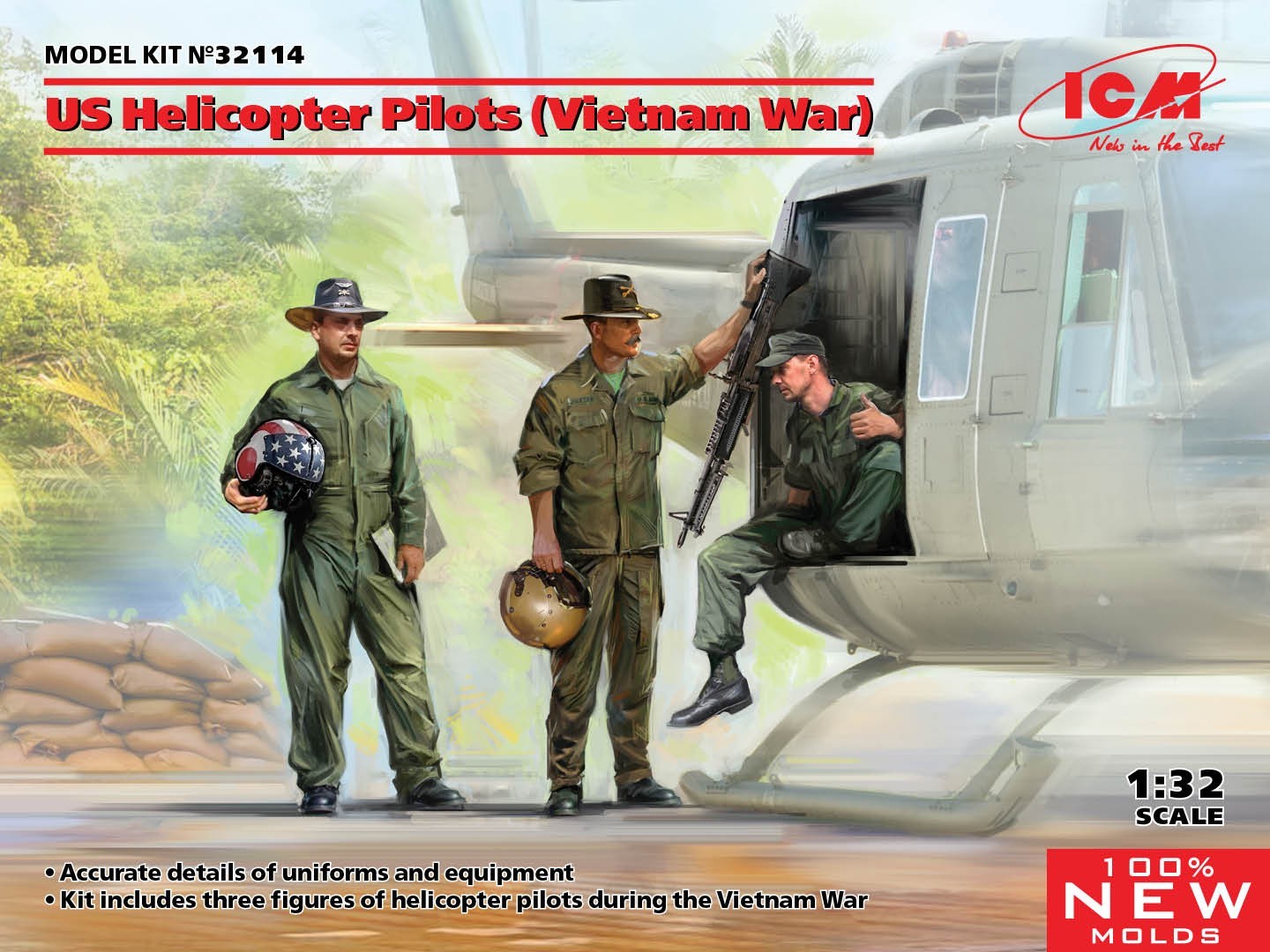 Available now from ICM are the 1:32 US Helicopter Pilots from the Vietnam war

The Stetson hats will limit you to an Air CAV outfit, and even then they were an uncommon sight. Generally speaking they wore standard base ball caps and sometimes boonie hats. Those black hats would be a miserable thing to wear in 120 degree heat. What’s wrong with the pilots is they don’t have any gear on them. At least a pistol (many used 38 S&W revolvers) or a Colt 1911a1. They also usually wore a pistol belt with survival gear attached.
gary

Right that’s totally true. They are also missing chicken plates (flak vest) Though I understand not many pilots liked to wear them.

Was in an Air/Armored Cav unit in the 80’s - 90’s and we had the Stetsons, but only wore them with Class A’s (along with spurs once earned). The real problem here is that you didnt wear cover on the flight line. We didnt even wear them in the hanger.

Just saying…just another way to get us to spend our money on Vietnam era figures, I know (and probably myself included) there are modelers who, once they see the" Box Art", will go crazy for these guys, regardless of the accuracy of the uniforms.

Don’t know if ICM do spare parts on their figure sets, but fingers crossed for a bbcap or similar. If not then a rummage in the spare box should see them right.

The Stetsons are not really out of place. Air Cav guys did wear their Stetsons often in Vietnam around their base camps. Also, Chicken plate was usually left off until they were actually flying as it was hot to wear. Some examples. 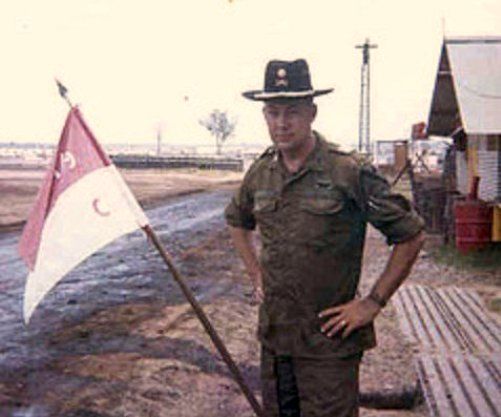 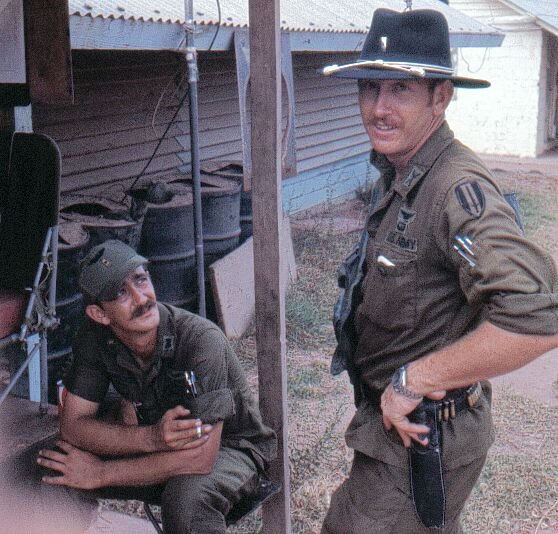 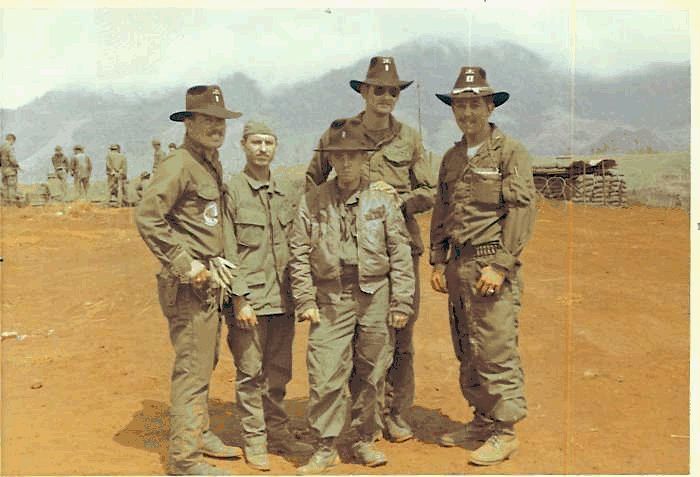 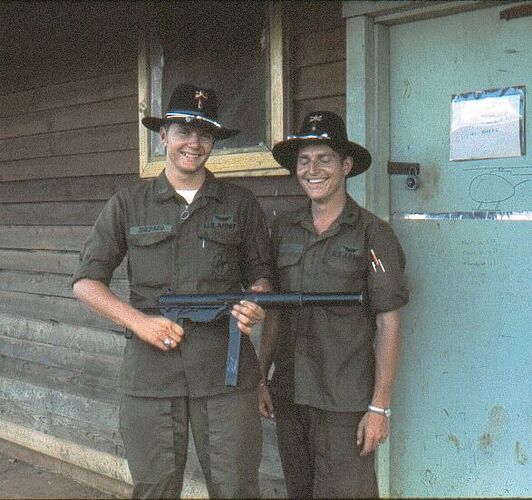 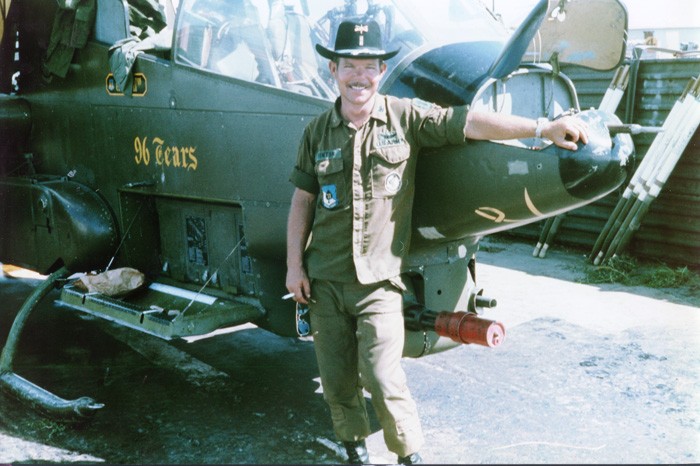 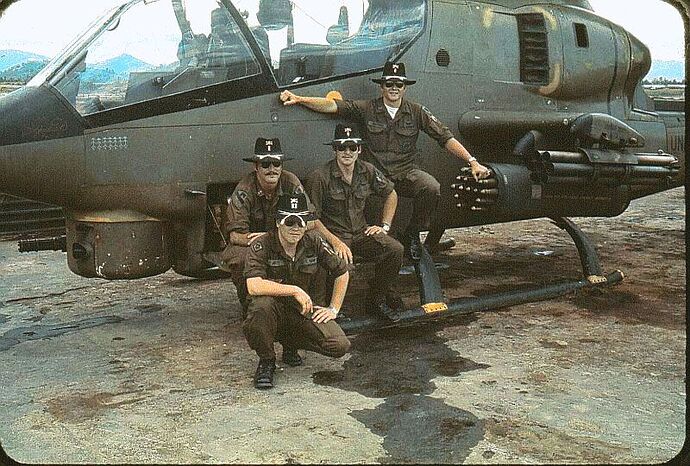 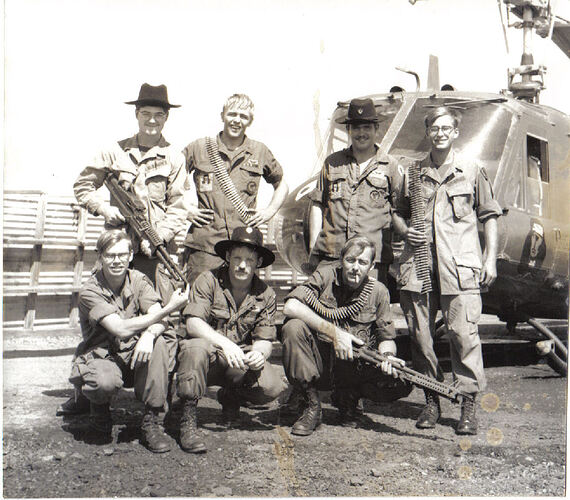 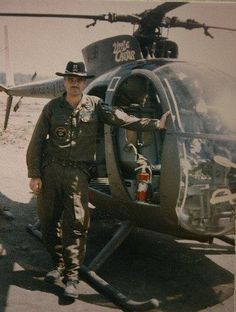 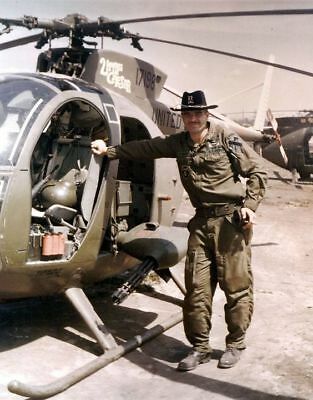 Although I’d imagine that they didn’t wear survival vests and body armour 24/7 - I can see that they would be desirable on ops but maybe not when off duty. Fixed wing aircrew certainly only put on that stuff when necessary.

The helmets look handy though, as I need one for a Falklands project…

As for the hats; looking good for a photo OP. Not much more. A Stetson hat or the yellow scarf was worth a serious reward to the NVA. Some units went so far as to forbid wearing the scarf or hat outside the wire. Same reason as nobody wore rank outside the wire (If you had common sense).
gary

Right, that is why I said they were worn in base camps. The set clearly represents a couple pilots and a ground crewman in a base camp lounging and gathered around a chopper, not outside the wire.

Hells yeah! Robert Duvall sported the Stetson; he wasn’t wearing no shirt, neither! And I ain’t gotta tell you what movie I’m talkin’ 'bout — no YouTube hotlink necessary. Haha!

Did you ever run across a pilot by the name of Hugh Mills? He was in the Squadron in Action book. He use to frequent the LHS I grew up working in back in the 80’s back in the Mid-west, great guy, very humble. Think he went down around the same number of times you did. Loach and Cobra pilot for 3 tours I believe.

Thanks for sharing your memories. I know those communities are small but its easy to forget the AO’s kept guys in particular areas for the duration. If you come across that old Squadron in Action book “Gunslingers” if I remember correctly give it a glance, has some stuff that Mr Mills contributed that you will probably find pretty interesting (given the nature of the discussion on the pilots and sidearms etc). Thanks for your reply and your service.

Looking at the fantastic reference photos, I can’t help but ask if there was a “correct” way to wear a Stetson? - because there are so many variations evident - i.e. brims and peak up, down or straight. Was it down to individual choice or did it vary between units? I was left in no doubt as a cadet about how to wear my RAF beret correctly - and, actually, my ex-Royal Dragoons brother helped make darned sure I got it right!

(I can’t believe it’s almost 10 years since he died, bless him.)

We used the two finger rule for our dixie cups in the Navy when wearing our cracker jacks (dress whites and blue’s for those that dont know the reference and the white cover). Think that “two fingers” is a military universal rule of thumb. Of course using that rule with a dixie cup you got a stylish rake to it that didnt make it feel quite so dated but tradition takes precedence.

How fortuitous! I just posted a request yesterday for help finding a holstered revolver as I plan to do a build for a friend,
Indeed, these figures would be far more useful with a choice of heads (without Stetson) and some gear.

This is Jim, who flew H model Slicks as in the seventh photo shown above. 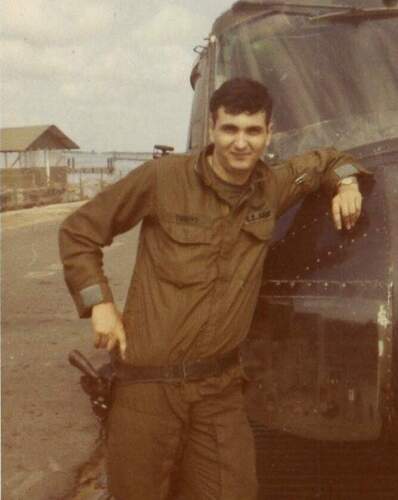 image669×839 34.8 KB
I’ll be using the old Revell kit, simply because I already have one in the stash, so I need a 1/32 scale figure. Along with that I needed a revolver.
These figures, although far from perfect, will be a better starting point than the Aries Resin Figure I planned on using.
Here’s Jim again, who lives in Fort Worth, flew a bird built in Fort Worth, and did his pilot training less than an hour west of Fort Worth. 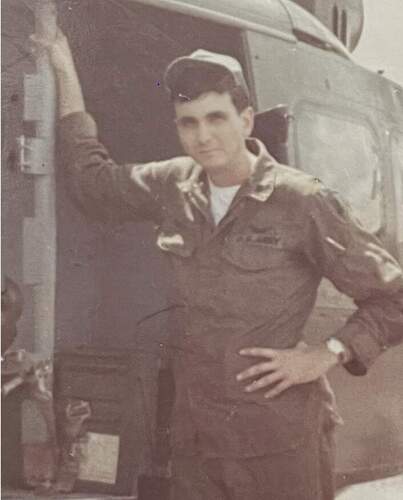 Good deal. These figures should work great for your project. Give my regards to Jim as well. It sounds like he is an honorable old warrior.

The 1/32 US Helicopter Pilots (Vietnam War) figures are available now. I know I am looking forward to them. 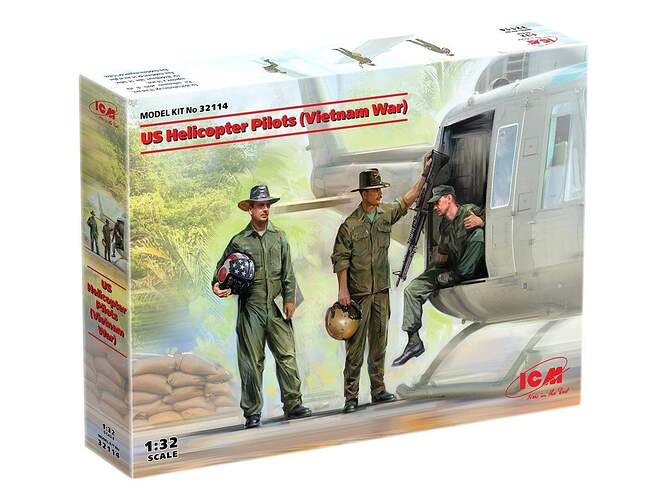 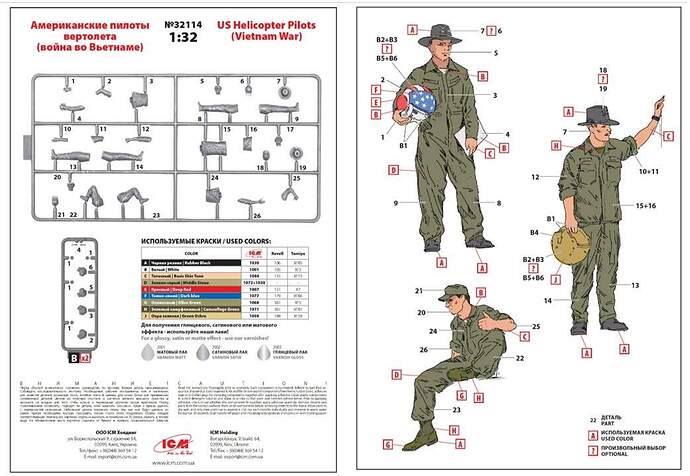 Of note, both pilot figures also include ball caps for them, as well as the Stetsons and SPH-4 helmets. 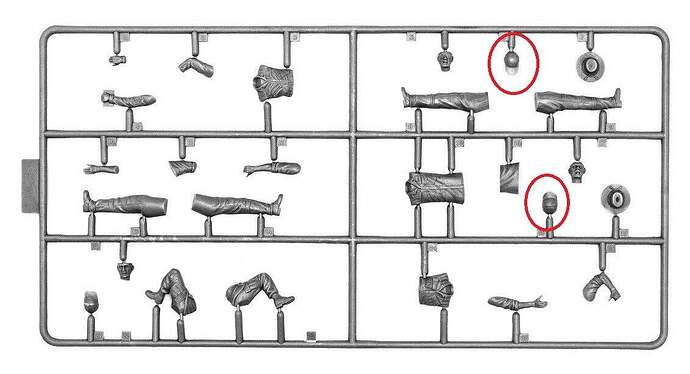 I would certainly never try to take credit, but a few months ago when this was announced I emailed ICM saying they would sell better if they had separate headgear, and could be used for other 1/32 helos as well. That email probably had nothing to do with the box art showing a Huey instead of their Cobra, and nothing to do with the added caps. I’m just glad they did it. Doing the “Jim” figure just became even easier.

Still have my Cav hat. The Smithsonian wants to display it in an upcoming exhibit. I have agreed to that.
Hugh Mills