Next gen vehicle for those who don't do figures 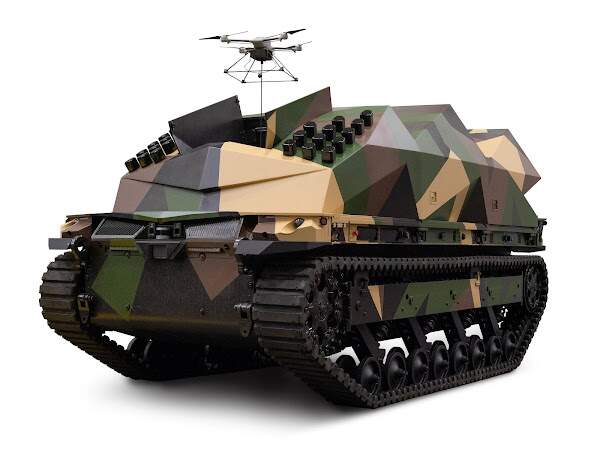 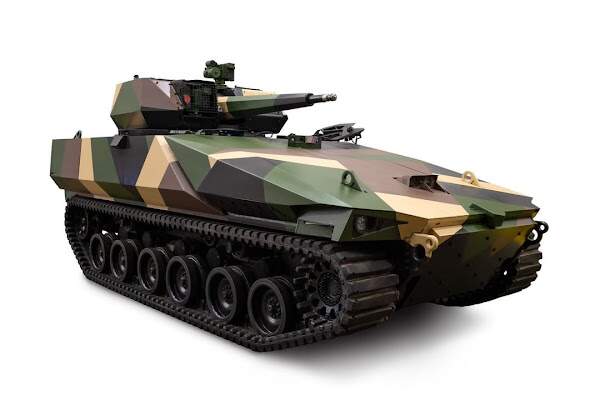 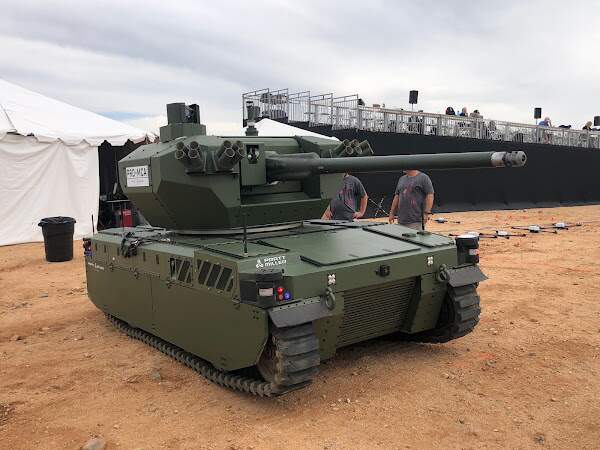 I can see the employment advertisement now:

“Help Wanted:
Do you own a high end gaming PC?
Are you an experienced and High ranking WoT player?
Is your manual dexterity in your hand uncompromised?
Do you want to travel the world (Virtually), meet interesting people (online) and kill them (for real!)?
Join the Army…”

I like the retro look of the Ripsaw M5 : 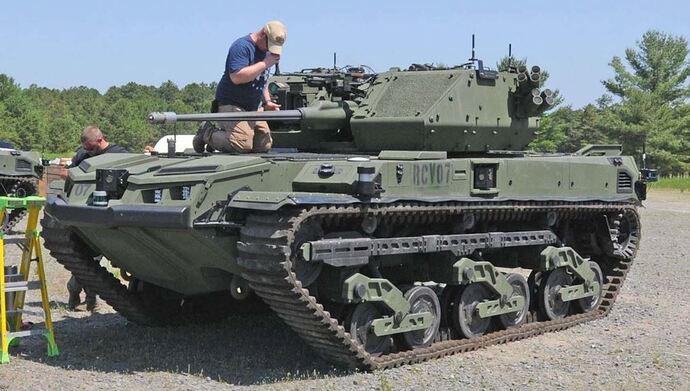 Why use old fashioned suspensions? Bogies similar to a VVSS Sherman?!?
What’s next? Suspension borrowed from a bulldozer or tracked excavator?
Baffled mind wants to know …

Hi Robin
Why use old fashioned suspensions? Bogies similar to a VVSS Sherman?!?

Possibly bcause it’s easier to repair after it hits a mine?

But they can almost be submarines apparently… 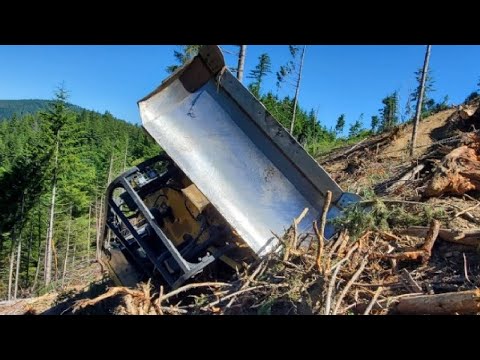 Is that what they call a water cooled engine??

This reminds me of a Matilda II.

Is it just me, or is the camo on those first two TRX pictures evocative of World War One? Ironic, that.

The M5 RIPSAW was first designed by Howe and Howe Tech who had a TV show on the Discovery Channel. These twin brothers had a small metal shop that was a startup, but if you look up H&H’s RIPSAW on the Internet, the black prototype did not have the suspension boogies and had roadwheels similar to the M1 Abrams.

Textron bought over Howe and Howe’s RIPSAW and changed the suspension to boogies. The M5 RIPSAW has a much smaller UGV drone that dropped from the bow glacis plate via a ramp, but I’m not sure if the 30mm RIPSAW one has that smaller UGV per US Army RCV-Medium requirements.

The General Dynamics and Oshkosh UGVs look nice and work too (there was a test-firing of the Oshkosh one), but it all depends on if the US Army wants the 30mm or 40mm cannon.

The best part is that the RCV-Medium will give US Airborne and Light Infantry a tracked armored vehicle with a 30mm cannon, heavy firepower for those soldiers who often have none.

The USMC so far has expressed no interest in any of the vehicles, but that doesn’t mean that they won’t buy any, although 30mm cannons are going on the Marines’ JLTVs via Kongsberg RWS turrets. 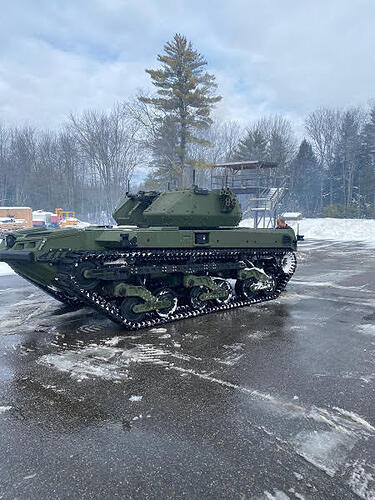 @Trisaw It looks like they found a old Grant turret, and said “Let’s see what we can do with this!”

Some great subject material for kits! And there is the Russian entry, 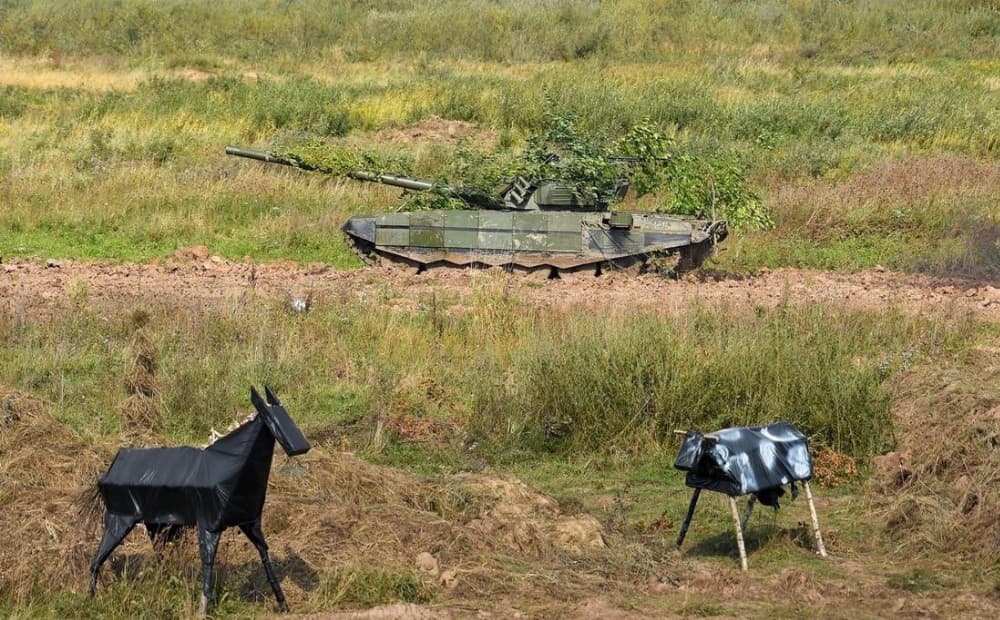 Because, you know, Russia 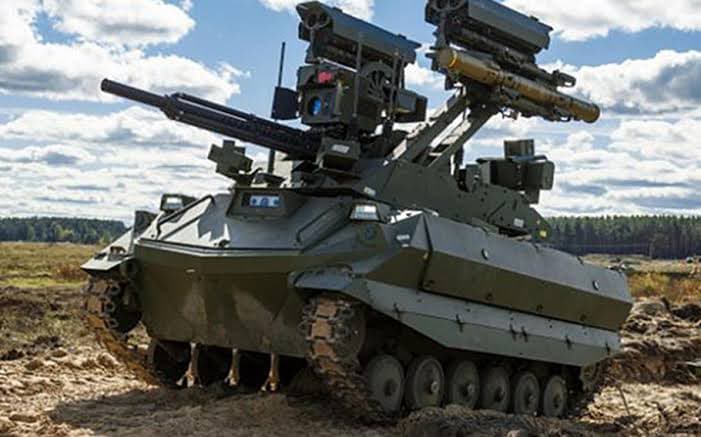 Russia and China has always been “one-up” in firepower for almost all vehicles, having larger caliber guns and even ATGMs unlike the Americans. One flaw is that their armor may be a lot thinner than the Americans, able to shrug off 7.62mm AP and that is it. US Army often tries for at least 14.5mm (AP) armor protection as standard now. So the trade off is firepower vs. armor compared to armor protection vs. lower firepower.

That Russian UGV with the ATGMs wasn’t a resounding success in Syria because it couldn’t go more than a distance remotely due to the lack of command and control, meaning that the Russian manned controlling vehicle was so close to the UGV that it too was vulnerable to enemy fire.

There is supposed to be a RCV-Heavy that has a 105mm or 120mm cannon similar to a tank and is separate from the 105mm Mobile Protected Firepower Light Tank. So far, some digital renderings exist as concepts, but no one has submitted anything definitive in design for that. If so, RCV-H should help the US Army’s Airborne and Light Infantry. Again, the USMC expressed no interest in RCV-Heavy or MPF replacing their M1A1 Abrams tanks (then again, the US Marines rarely disclose much of what they plan on doing anyway).

Here is a digital rendering of the RCV family from Light to Heavy.

And the bronze medal goes to Estonia, 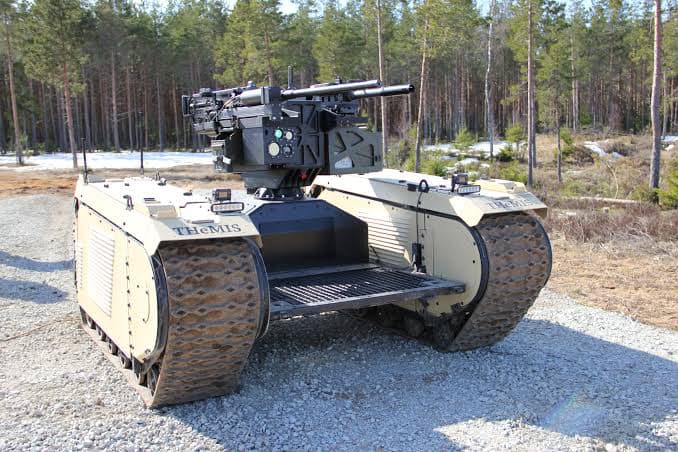 Further to what Peter said, there has always been the struggle between weight (armour) and firepower, particularly when cost is king.

Yes, that Estonian UGV is pretty impressive and can sport a nice Remote Weapons Turret, but so far, no buyers that I know of. As you can see, former Eastern Block and peer nations often add more firepower to their vehicles than the Western powers.

Essentially, the truth is that with Authoritarian governments, they can copy what the West is doing and get their “copycat vehicles” out much faster due to lack of Red Tape and answering to the taxpayers. Therefore, they have some UGV combat experience that is vital intelligence to the West because their UGVs saw combat first whereas Western UGVs are still in testing and at the drawing boards. Note that even remote, soldiers still have to reload the UGVs manually so soldiers won’t be that far behind these remote unmanned combat vehicles.

Are you an experienced and High ranking WoT player?

Talking about Estonia, the logistics (unarmed) version of their UGV has been operationnally tested in Mali :

Is that a T-60 under there? Looks like it from the road wheels…