Hey guys - I just purchased the Takom Panther G (Early) with zimmerit. Would an Ambush camouflage scheme be appropriate?
Thanks!!
John S.

I’ve never seen a picture of one.

I suppose it is possible in the one month between August 1944 when the Early G entered service and September 1944 when zimmeritt stopped being used.

If (and assuming) factories took a couple of weeks before implementing painting orders, there possibly could have been 1 - 1 1/2 weeks of Panther production, still with Zimmerit, which could have had ambush camo. With an average production rate of some 75+ Panthers per week, there’s the potential for 100 - 130 Panthers with Zimmerit and ambush camo during this overlap period - purely conjecture, but based on data. *

Thank you gentlemen. I agree it is very unlikely. Now I need a Panther G mid-late war!

It may activate the German WW2 AFV paradox:

Ummm…this looks a lot like a Panther G with Zimmerit (it’s plainly visible at the ends of the mantlet) and with disk ambush camo: 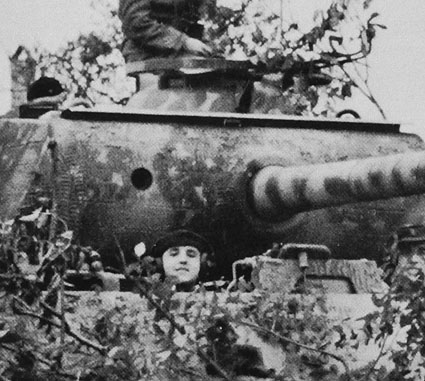 Well. Obviously it ts a Parisian driving around post war. Just look at the jaunty expression and the beret. See no controversy here at all…

Go ahead, say it if it is constructive, or humorous!

@TopSmith; I also find his cap/beret puzzling; it doesn’t resemble any kind of German headgear. But if it’s a Parisian joy-rider (or was that humour?), what is the purpose of the foliage camo? And the liberation of Paris was well before any Hinterhalt-Tarnung was being used. I just wish the photographer had backed up several more feet to take the pic and provide some context. The only background appears to be a house chimney with a rain deflector (or stork-nest discourager) behind the L. turret.
Here is a link for painting ambush camo. The purpose is for painting war-gaming vehicles (1/56?) and may look a little amateurish for scale-modeling, but the techniques can certainly be modified or refined for 1/35, or even 1/72. Hobby

So what would the alternative be to Ambush Camo?

Hi friends, here you can see a MNH early G with “Ambush”. Please see also the early tubular hatch handle and no wooden support for it. This vehicle is more likely to have all other “early G” characteristics

@joepanzer; If you want to be boring and lazy, yes

Here’s another case for this tank having been captured: note the aperture for the co-axial MG; normally you should be able to see the muzzle of the gun, but it seems to have been removed!

I also have a possible explanation for the co-driver’s headgear; apparently some Free French tank crews retained their original French service berets (bachi caps) like these dudes: 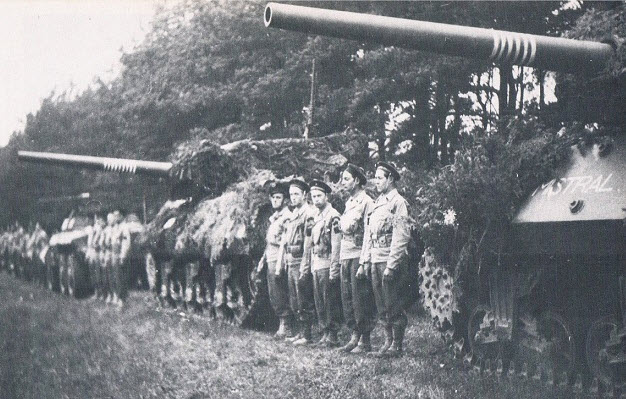