I’m building trumpeters 1/35 PT-76, the early variant that would have been in the Hungarian revolution. What would be the proper green for this build. I use ammo Mig paints and have the modern Russian camo set with there light green 0051 and i have the post war Russian paint set that has four different greens in it. What would be my best choice?

I’d go with the Post War set, since the 1956 Hungarian Uprising was before the “modern colors” era.

Postwar Soviet Green was generally matched to FS-34095 in the FS-595B guide. You night want to add some yellow ochre for scale effect.

Your source for that?

Thanks guys, i used an ammo Mig Russian base which came out quite nice. I chose this over the post war green for the pt-76. I have an T-62 that I’ll use the postwar green on next.

My suggestion would be that do take in account how much that particular vehicle could not be overweathered by October 1956 as first series production started in 1953. Also as I read in the Tank Encyclopedia, the second variant appeared in 1957 only, after the uprising in Hungary. So do look after the history, timeline and variants possible to build from the kit, to avoid something irreal model.

@Agriamodeling so far i haven’t had a ton of weathering, i just did some griming streaks and some brown wash. So far it’s going to be a stand alone model, not sure if I’ll add some weathering to the tracks but then again they really wouldn’t have seen a lot of wear and tear

I am.sorry, the real word I wanted to use is “fading” and not “weathering” and fading would reflect to the main questionyou asked: the green colour,
What I mean is that during the service lifetime the original green would fade a lot. I have some photos about Hungarian T-55 variants stored under direct sunlight about in the ‘90s and all,of them are closer to the faded praire grass yellowish-green than to the original russian color (whichever it used to be in the factory paint room).
Such heavy fading would be incorrect in October 1956, also those days were really “dark by season and weather” so a bright, faded green shall be not a good option. I recommend no fading effect to the model panels’ center areas, but use (almost entirely) original shade of the paint choosen.
Of course some normal, not excessive weathering (rainstreaks, dust or mud etc…) is very likely and would be lively in October 1956 (which was a cold, wet time as I know).
For a base, I would likely use cobblestone street dio set from Miniart, (optinally perhaps with a big city house front, some civilians perhaps googling from the sidewalk) as cobblestone was normal that time in Budapest.
You can surely find reference photos using such words like “1956 forradalom utcakép szovjet harckocsi” . EvenT-54 or IS-xx tanks would happen on the photo, the background could be inspirative.

@Agriamodeling thank you, i didn’t get a good shade on it, the paint came out darker then anticipated but i love how it looks. I’ll upload some photos of the build on Imgur tomorrow. I was looking at some cobblestone sections today, i have a cobblestone section but it’s a country road not sure if it’ll work or not but i may use it as a base for a few kits. I didn’t really plan to build a dio for this kit but maybe I will. I’ve been on an Russian/Soviet armor kick lately.

So was doing more research after i finished my build and i realized that the white stripe that i painted was only used in the invasion of Czechoslovakia during operation Danube.

Rookie mistake on my part.

Since Czechoslovakia was a Warsaw Pact member state, it practically used the same military hardware as the invading countries. In order to avoid friendly fire, white identification stripes were applied to AFVs participating in the invasion.

If the white stripe is there and this is an irrevocable marking, simply name the kit as a participant in the Operation Danube. It is your freedom, maybe you wanna build another tank or whatever kit in Hungarian colours. Myself has already a Shilka in the stash from MENG because it looks great and I could get Hungarian decals for that vehicle. This is kit nr 35 in the stash, a pile enough for 70 more pandemic waves or 2-3 Zombi wars… none of them is expected, though

@Agriamodeling i think that’s what I’ll do, I’ve been eyeing an Asu-57 which i believe we’re used in the Hungarian revolution or even maybe an early Btr. I have some interest in the subject but just need to read more on it.

Gregory, as I understand it the white stripe marking was also used as an exercise marking to differentiate opposing sides, so the use of the stripes does not limit your models to Op DANUBE.

Correct. Even today, the white stripe markings are used in the fighting in Ukraine.
If the Cold War had ever gone hot in Central Europe, I suspect that the Soviets and Warsaw Pact Forces would have adopted some sort of white stripe recognition mark for CAS ID purposes as in 1945.

I think the main point is to make a realistic vehicle and as per my knowledge about war the history, this particular type and white stripes did appear in the Op Danube but not elsewhere.
If so, I would keep the idea to title it Op Danube subject. But it is about the builder’s decision, of course.

I am sure that the model looks impressive and caused lot of fun during building and at the end this is the reason we have this hobby, am I right?

Hopefully this link works. I just uploaded the pictures of it on imgur 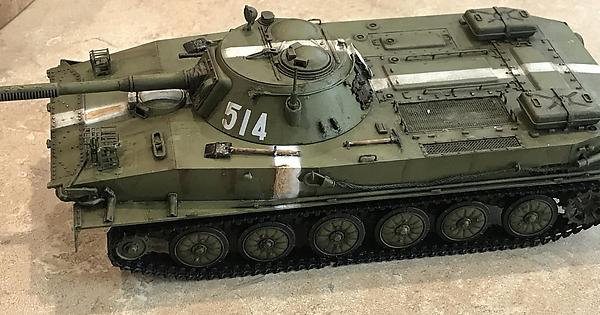 I’m going to keep the stripe and maybe do a different build for the Hungarian revolution, not positive yet if i want to add figures to this kit or keep it as a stand alone piece yet. It was a very fun build for four days during the holiday block leave.

It looks great, indeed! To give you some more help, I link here a Hungarian site of the former (and partly current) field vehicles of the Hungarian Defence Forces where you can easily find good walkaround photos.

I should have somewhere around some books about the HDF tanks in 1956, but that would be in Hungarian language, so less help. Anyhow, there were limited eqp in service that time, for tanks you might want to choose T-34/85.

@Agriamodeling thank you, I’ll give it a look. You’ve been a great help for this!