Hi Guys, thanks for all the feedback. Are we talking about all ten wheels, or just those skinny front ones? I see DEF does sets for both. If I can get away with just the fronts I’ll be able to fix the other 2 Italeri M925 kits in the stash too.

Id really like to build one of these to Bigfoot standard like Heartless Wonder, it looks great on those big singles.

Also, any good links for fading the canvas?

I would replace them all so they match. I prefer the Def Model wheels as they look to have the proper rounded profile. Make sure to get the newer, corrected version for the rear wheels though, DW35116. 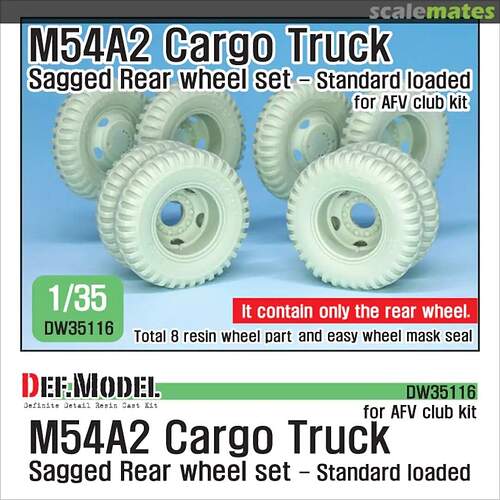 The first version was molded incorrectly and they stuck out too far past the bed sides. Some of the first version boxes say “Released August 2018” on them, while others don’t, but they are DW35110. 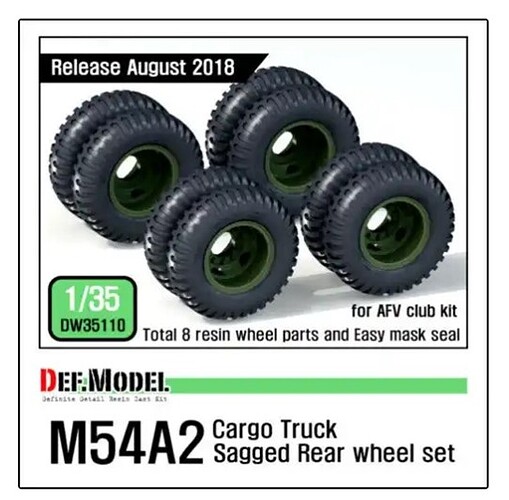 For the canvas, you can either drybrush with a lighter green and a sandy color, or do a wash of the sandy color to weather and bring out the details. I would do both, drybrush first, then wash.

I’ll get some research done on dry brushing. Jeeze but the correct DEF rear tires are in the same price range as an AFV M54 kit 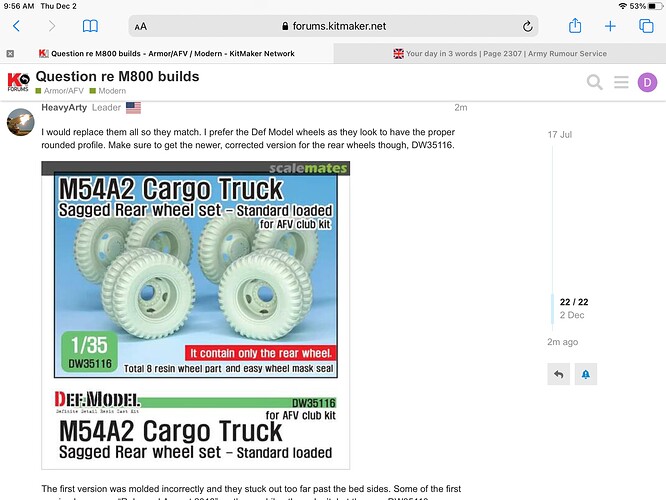 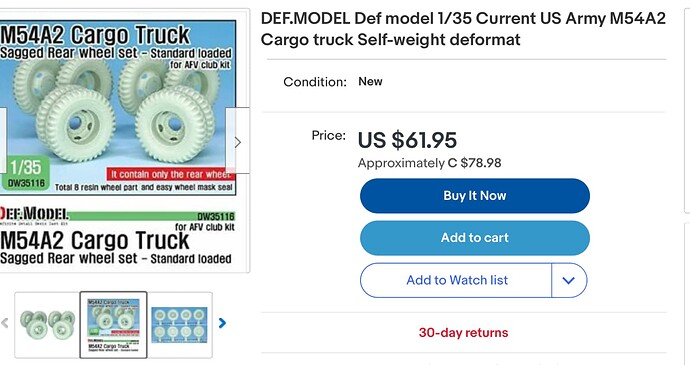 You need to look around a bit. I have seen them going for about $30 USD.

Id really like to build one of these to Bigfoot standard like Heartless Wonder, it looks great on those big singles.

Do you have a pic of it? I am not familiar with that truck. 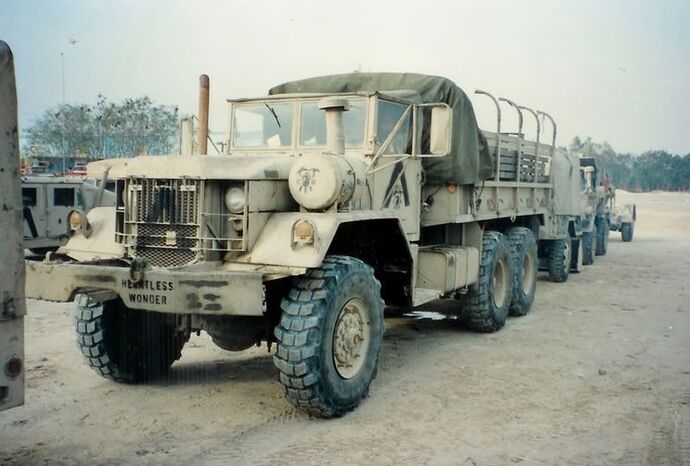 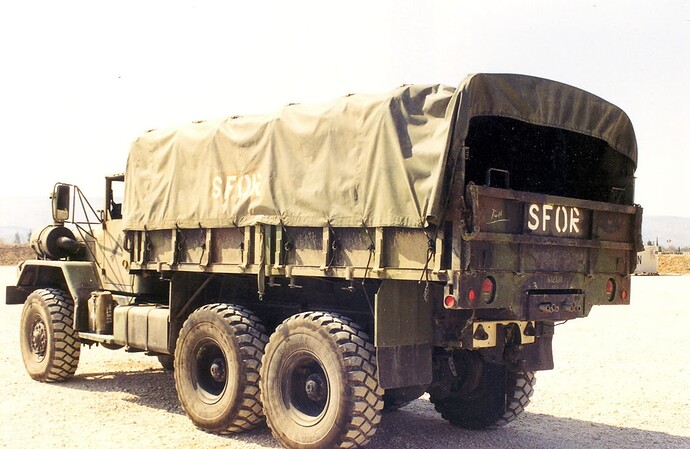 There you go. I shopped around and found 2 DEF 35116 sets on Sprue Bros and got 2 front wheel sets from Aussie.

After some more research, it appears that some of the last M813s used were rebuilt w/the big single wheels/tires. It appears that these were mostly USMC vehicles that they rebuilt to save money as opposed to buying new M900 series 5 tons.

This one was even seen in use as late as the early 2000s in Afghanistan. 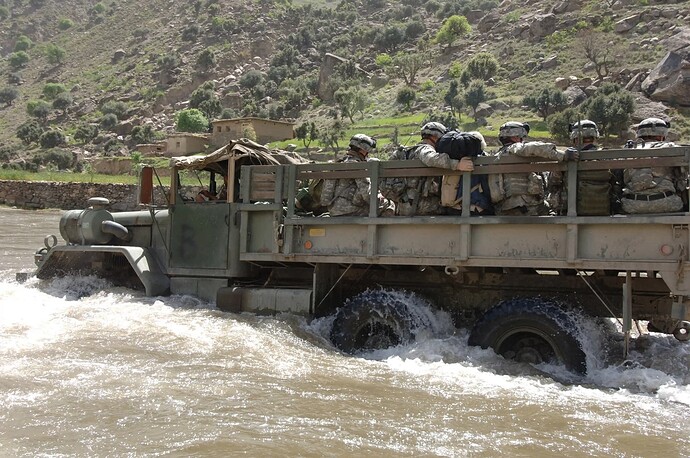 I wonder if the truck above belongs to the U.S. Army. In the hi-res version of this picture, you can notice that the driver appears to be an Afghan soldier…

If youre talking about Heartless Wonder, im guessing it was US-owned at one point.

I was talking about the one in Gino’s last post.

I see. The DEF wheels are on order and im searching for how to’s on weathering the canvas.

As I said earlier id love to build a later M813 with bigfoot-style wheels, but not sure if I want to repeat my first resin experience.

Has anyone else built an 813 ? Hard to believe mine’s the only one.

Question relating to the modifications noted on this build; any advice on removing the old wheels without wrecking the axle-ends?

They were cemented in the usual way and I’ll probably use a spare shelter box to support the kit.

BTW I read somewhere of an M54 kit being converted to an M800, so mine’s definitely not alone.

…any advice on removing the old wheels without wrecking the axle-ends?

Apply more liquid cement and see if it softens them enough to pop them off. If not, cut the wheels off as close to the backside as possible and use some styrene rod to make new ends for the resin wheels to slip onto. I would also use some heavy metal wire to attach them as well for extra support.

Thanks Gino, I’ve noticed the Tamiya thin quick drying cement causes quite a reaction (separating) when added to a recently glued part. Despite its quick drying nature, could this be the right glue for the removal process?

Other cement is available

That should work. Pretty much any liquid cement should soften them enough to remove them.

Thanks again. Will finish building the AAAV-R and then get to finishing this old clunker.

My M813 is finished. DEF wheels, 3d hubs by Dennis and James at Shapeways. Mission Model OD Faded 1,2 and 3 for the tarp and cab roof. Tarp is newer than roof, hence color change. 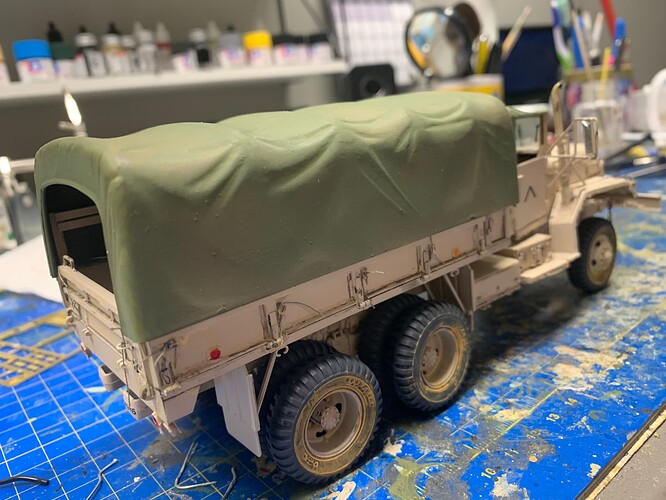 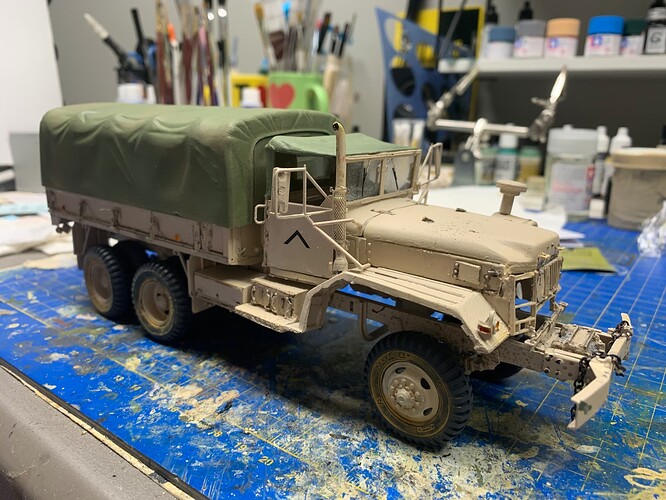 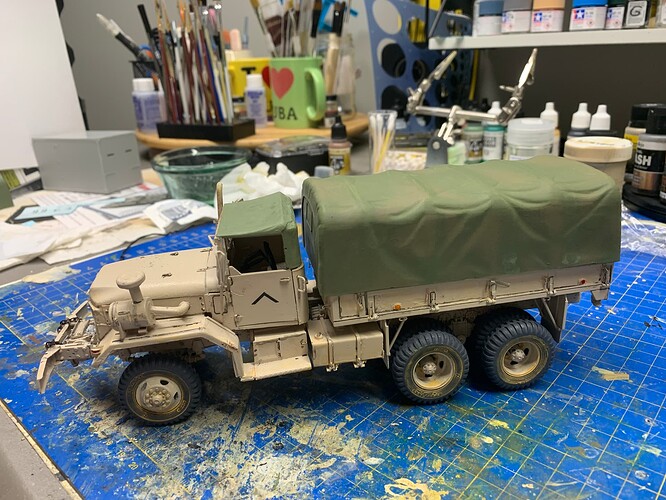 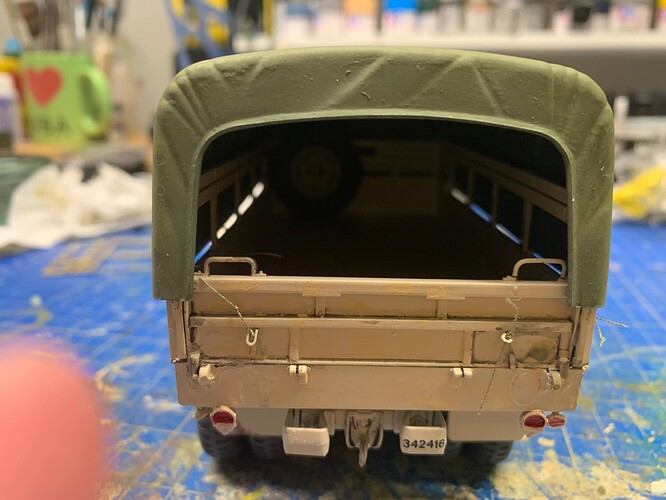 All mods are based on feedback from the original.

Looks nice. Good job on it.

Thanks Gino. Far from perfect, but OK from a distance