Questions for the spitfire experts

I am building a spitfire mkviii from squadron 417 of the RCAF in italy 1944. The specific plane I am building is the one shown here

The question I have is in regard to the load out. The icm kit has optional 250 and 500 pound bombs but doesn’t say anything about which variants should have bombs versus not. From the picture it looks like this one has the air intake (?) on the fuselage so the 500 pound bomb is out. But the wings are too dark to tell if it has pylons. How common were the 250 pound bombs, especially in 1944 Italy? I like adding bombs to plane builds as it adds some life in my opinion but also want to be somewhat accurate.

My second question is looking for feedback on my build to this point. I have recently gotten back into aircraft and this is my first ever crack at making seatbelts. This one didn’t come with any, and I don’t want to buy aftermarket for this specific build. I made them out of tape and wire. Do you think they look okay or not? 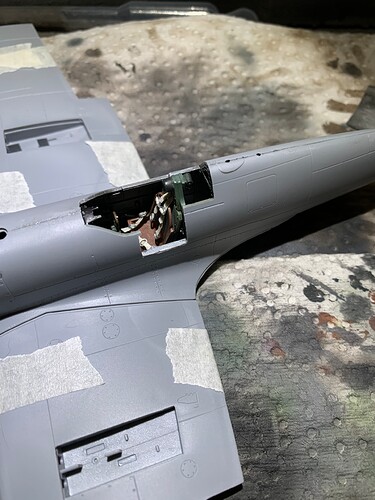 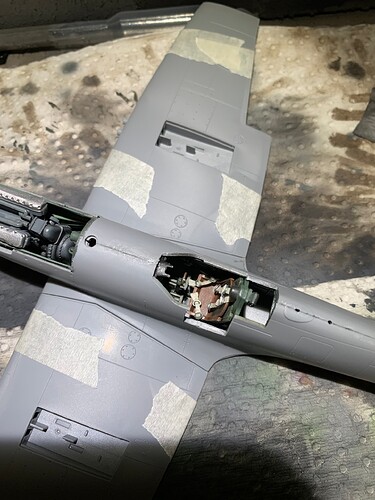 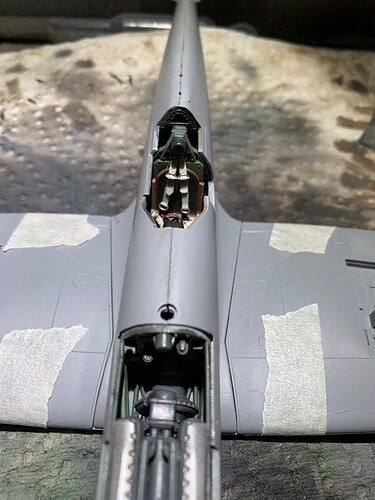 I would say your seatbelts look just about right.
I routinely make mine from the protective paper they put on decal sheets and paint the buckles. But I mostly work at 1/72 and you can get away with quite a lot at small scales! Your homemade buckles look really nice, much more realistic than 2 dimensional etch.

As for your question about ordnance, I’ve seen lots of photos of Vc’s in Italy lugging bombs under their bellys, but can’t seem to recall a MkVIII. That’s not to say they didn’t. My advice would be to research that squadrons operations over Italy. Osprey might do a reference book or two on Spitfires in the Med which would be a good starting point.
When you talk about the fuselage intake, do you mean the longer carburetor under the nose or part D13? D13 is a long range fuel tank and would only be carried on long range ferry flights. For example flying from one location to another outside of the aircraft’s usual range.

Thanks for the feedback on the buckles, I was a little worried they were too bulky.

Yes I was talking about part D13, good to know what it actually is (excuse the noobiness lol). I think I will leave it off as I prefer to show one that has already been in theater for a while. I do notice shadow under the centerline of the spitfire, but not sure if it is just a shadow or perhaps is part D13

Ill do some research on the combat operations. I have found lots of pictures of 417 squadron but most are from earlier in Africa with the Vc tropical versions

According to the RCAF Association website, 417 Sqn provided CAS for the British 8th Army in Italy and dropped over a 1000 ton of bombs!
Even has a list of targets destroyed!
I’d say you could put either the 250 or 500 pounder under her belly.

Hope it helps and best of luck with the project.
I’m currently on holiday in Malta. Visited the Malta Aviation Museum yesterday and I’m getting plastic withdrawal symptoms and can’t wait to get back to my bench!

Thanks man, appreciate the help!!

Sounds like an awesome trip. Ive hear the island is quite interesting to visit!

You can get squadron records online from the National Archives at Kew.

They’re a little clunky and the scans aren’t great quality sometimes, but if you know the rough date range you want you’ll be able to find the ops logs for that day. 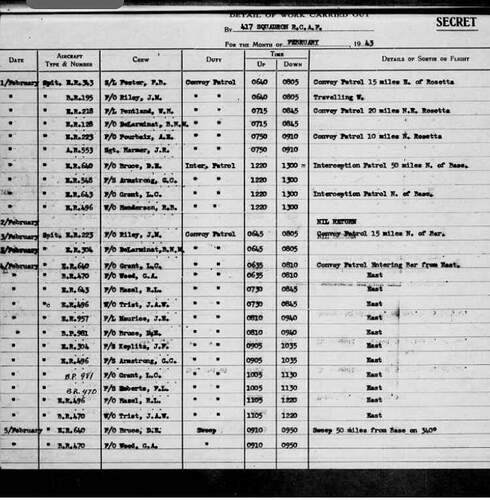 I just pulled a random log page here to show you. This is back from when they were still based in Tripoli.

It is, there’s quite a lot of history here. Everything from ancient, medieval, Napoleonic and of course WW2. Lovely food, nice local beer and everyone’s very friendly.
Well worth visiting, but it does get VERY hot!

Fantastic, Ill take a look at this, I have the aircraft serial!

Do you have a link to the website? I seem to be having trouble locating it. Thank!

Of course I do!

This is the top of the search tree. You can try refining things more with their check boxes or just adding words to the search.

These reports are very fun to read. the humor at points and detail is interesting.

“Still no contact with the Hun. The softball-game was more lively than our time in the air”

Assuming you can read them they really do provide some great insight. The monotony is what really strikes me.

When I was looking for details on the Mustang I made, there was just day after day of “Flew over France, saw a truck in the distance, came home”

Yeah that struck me too. You can also see going from month to month as air superiority was secured that the flights get less and less interesting. Early in italy they have lots of bomber escort missions and intercepts of enemy fighters, and then later it switches to routine patrols

At least the flyboys got to keep their jobs.

My wife’s grandfather enlisted the the RCA and ended up as a light AA gunner in Italy.

They ran out of things to shoot at around the same time that D-Day was kicking off. As a result Italy got put even further on the back burner (if not taken right off the stove) and we started running out of bodies to shoot at Germans with because everyone else was bound for France.

The consequence of this is a bunch of “surplus” divisional assists from 5 Canadian Armoured Division got rerolled into legs. Westminster Rgt and the PLDG got turned into Infantry and overnight, the two Light AA units became The Lanark and Renfrew Scottish, which up until now had been a depot unit back home.

Mel got handed a rifle and ended up a POW with a bunch of mortar fragments in his back.

Those reports were immensely helpful. For one, I find no mention of JF 880, the plane in the picture that inscribed 417 squadron Verano Italy April 1944. Its possible 880 came into theater later, but with no mention of it ill have to do a different aircraft. No problem I have a generic numbers sheet of decals I can do!

Ok so I had the same issue with my Mustang and I’ve been pondering it… I went through every aircraft serial I could find online for 430 Sqn and couldn’t match a single serial in the records I was looking at.

I chose to use a serial out of the log because I was basing my build around a specific pilot on a specific day but I had zero pictures to go on. I figured that the records I saw elsewhere online (like the RCAF association) may have been from earlier/later in the war or replacement airframes etc…

You also can’t argue with the authenticity of squadron logs vs “the internet”.

There’s also a possibility that aircraft have multiple serials, like a VIN number for the airframe vs however the air ministry tracks stuff.

Your bird is doubly special though because it was ex USAAF no? Maybe there’s a disconnect with the numbers there too

Edit: though when it comes to things you can’t argue with, it doesn’t get much better than that picture

Yeah from my reading, the spitfire MKVIII used in Italy by 417 were ex USAAF Spitfires from North Africa. Possible the airframe, and the serial on record dont match. I agree with you though. Ill side with the log over the internet. There were multiple JF planes one being JF882 in the logs.

I agree the picture is convincing. But I have no idea if it is actually from Italy, or in April.

Sounds like you’ve got your self sorted then! Glad those records helped.

Thanks a bunch for providing the location of them

Another question, were ejection ports ever taped over like the machine guns were? The icm kit has squares over them, but also has them outlined on the inside to drill them out. Debating if I should drill them out or not 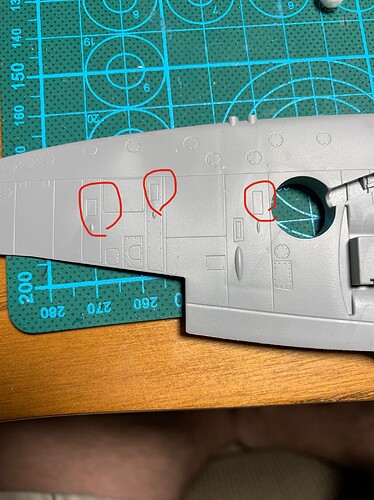 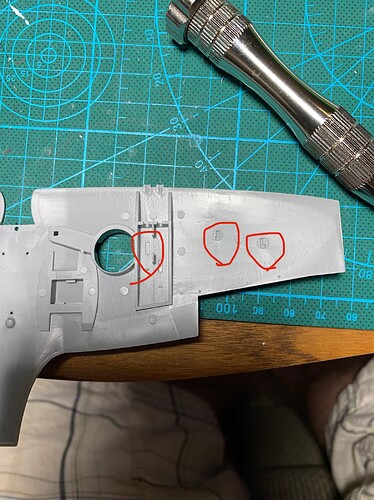 A later step seems to show them drilled out despite them never telling you to drill. I think I’ll drill them, the tape wouldn’t make sense as there would be anything to break it