Hello All,
I have some questions concerning the Tamiya Panther steel wheel version. Is it the same kit as their Panther early G? The early calls for zimmerit but there is no indication of zimmerit on the steel wheel version. Would it have had zimmerit? If so, would it use the same pattern as the early model?
Thanks & God Bless You,
Joe

The steel wheel kit has more options as it actually includes both steel wheels & rubber rimed wheels. I can probably pull a steel wheel kit out if you have specific questions. The mold quality is very good but its ~1995 technology. Today’s new kits are nicer detail wise.

Based on current documentation and pictures that I’m familiar with odds of a Zimmerit covered steel wheel G seem pretty low to non-existent.

If i recall correctly ~100 or so steel wheel Panther G’s were believed to have be built total but only between ~24 to 28 have been confirmed. I think the production date was ~ September 1944 basically when Zimmerit was discontinued as factory application. I’m not aware of a picture of an all steel wheel G with Zimmerit but pictures may exist somewhere

That’s my understanding. Definitely open to new information as with WW2 German AFV’s there are very few absolutes.

Hey Armor_Buff,
Thanks for your response. I thought it odd that both kits are essentially early G’s and the one kit calls for zimmerit but the steel wheel version doesn’t have it. I was thinking that all early G’s had zimmerit due to their production time. I appreiate your time and help.
God Bless You,
Joe

Happy to comment. By the way Panther G production ran March 1944 to April 1945 plus a few assembled after the war for evaluation purposes.

So while the Tamiya early G and steel wheel G kits are very similar there are a some mimor changes between March 44 to September 44. Tamiya also tosses three night vision devices in the steel wheel G as a little bonus. The steel wheel kit allows a little flexibility since one can basically build it as an early or as a steel wheel. The extra set of wheels can help take a little of the tremendous suck out of the terrible Italeri Panther A kit if one wants to visit the dog pound.

This is sort of a cool Kit in my opinion one steel wheel, raised engine deck heater & chin. 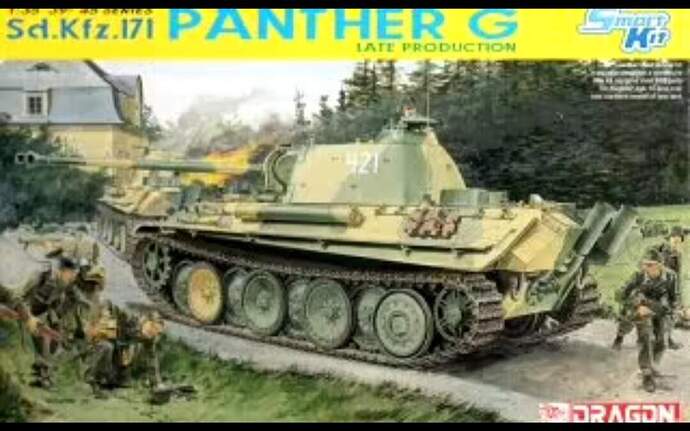 Hi Armor_Buff,
Thank you again for your time in helping me. I was asking specifically about the Tamiya kits since those are the ones that I have. When it comes to German armor there seems to be so many variations and exceptions to those variations.
God Bless You,
Joe

Joe, just to add on to what Wade said, the 3rd Tamiya kit with the chin mantlet, which I built last year, I am pretty sure it is only the rubber tyre version but I think it did have the one rear steel wheel option included …

The Dragon smart kit he put the image up off is brilliant, I built it a few months ago for the Bulgarian equipment campaign Bulgarian WWII Campaign and its so good I am getting another. Only has the 1 rear steel wheel option, but its a great kit.

Hi Johnntch01,
Thanks for your input. I have all three versions of the Tamiya G Panther and they will probably be the only ones that I acquire.
God Bless You,
Joe