Equiment- tanks, assault guns, cars, trucks, guns, wingy things- the choice is yours.
No scale restrictions- build in the scale you feel most comfortable in.
Feel free to add figures, dio bases and whatever enhancement you feel like.
Build as much as you like(I’ll build at least 3 tanks).
Have fun

Im in Angel - will doing the Panther G

Thanks for your swift confirmation John!
What a Panther will that be!!!

Have decals in hand & I’m in with a Bulgarian T4.

Either a Pz IV G or H. Without the bogus green crosses! 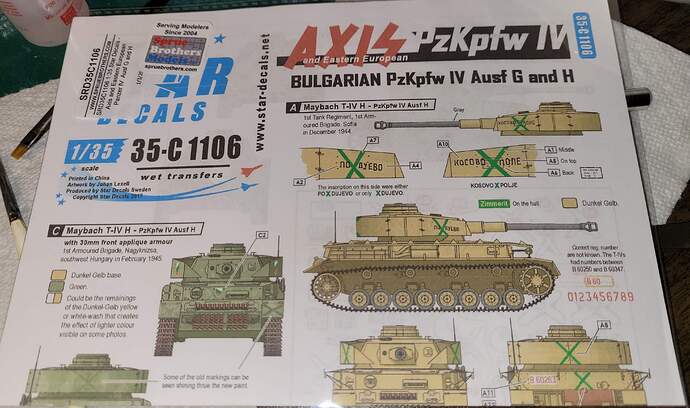 @Tank_1812 Ryan, I’m looking forward to see your Bulgarian RSO/01 tractor. I have an Italeri one in my stash that I’ll build some day too.

@Armor_Buff Good choice, Wade and yes, stay away from the Green crosses! Faded gray will be a better choice for the weathered crosses and you can always create a stencil or simply paintbrush them- they were drawn freehand AMOF.
I also Intend to build some Maybachs from various deliveries and producers.

I’m thinking Tamiya Simca as a quick build (ha ha) then also do a Dragon SdKfz 7 (early) and Trumpeter Schwere Kanone 18. A big task ahead on that combo.

About your second planned build:
The 10.cm sK.18 in Bulgarian Royal Army was towed:

The Sd.Kfz.7’s(or KM11’s as their Army designation was) were used as tractors for the 8.8 cm Flak 18/36/37(incl.6 vehicles in the Armored Brigade’s AAG Detachment’s Heavy Battery) or for the 122 mm Corps Gun A-19(ex-Soviet Guns, German trophies from the Eastern Front, transferred to Bulgaria). I can provide pictures here too.

Okay, bubble popped. I have neither of the other matching components in the stash! I was probably biting off a bit too much there anyway…

However, I have just come across this! 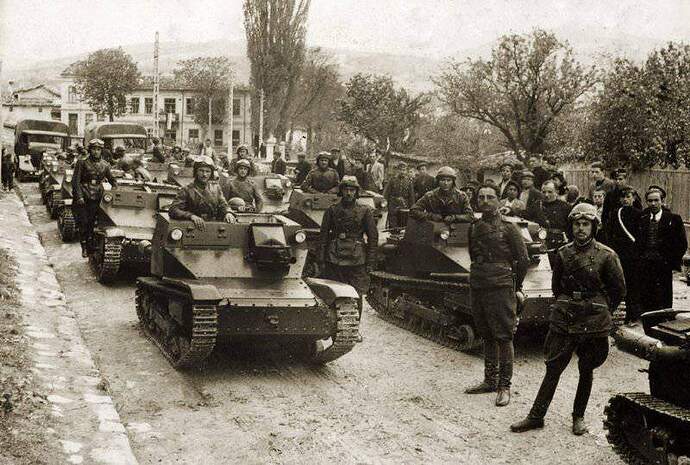 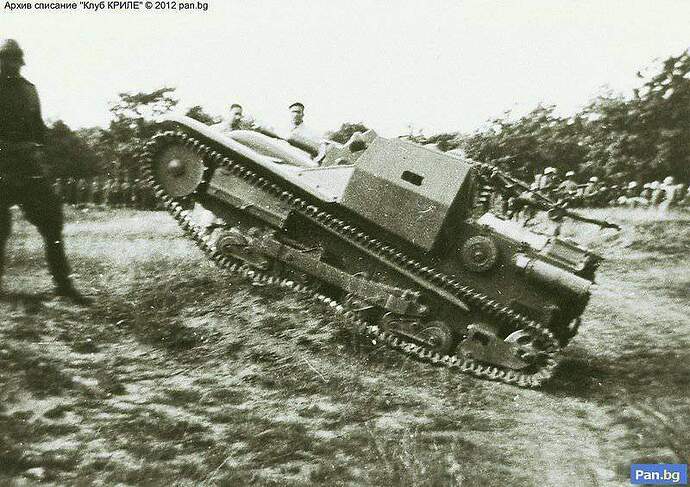 I have the Bronco Cv3/33 early, which I think matches the 1935 time frame these were acquired by Bulgaria. From a elephant sized build plan down to mouse sized…

I will have to scratch build replacement Schwarzlose MG but there does not seem to be much difference, at least in these pics. I am presuming they would be ‘Bulgarian’ green? Also, there doesn’t appear to be any markings?

You have the interior kit from Bronco(CB35125), right?It represents exactly the model Bulgaria purchased.

The pictures you found show the freshly delivered CV’s. They had factory paint-an Italian Green and some tankettes had blotches of Dark Green applied too.The CV’s were given the designation “FIAT-Ansaldo” and reg. numbers from В 60001 to В 60014.The number plate was placed at left rear.

In the late 1930’s the FIAT-Ansaldo’s were repainted in 3 collor camo(green, yellow and brown), later on the camo was abandoned and they were painted Bulgarian Green(a dark Green collor). At that time the last digit/s of the reg. number were painted in white on the sides of the superstructure, yet that practice was short lived. Eventually all Ansaldo’s wore plain Bulgarian Green.

I’ll send you what I have- collor schemes, markings, incl. a Schwarzlose MG manual for scratchbuilding the barrel and the tripod(which was often carried above the engine deck-like in the second picture).

Thanks Angel much appreciated. I think all Bronco’s CV3/33’s have the interior. This is the one I have: 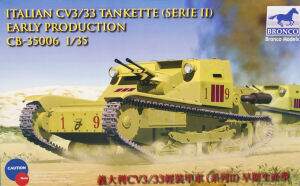 I bought this second hand, and now I have opened the box, I can see the parts and instruction sheet are from the 35006 kit, but the box is 35125…I have a bad feeling, I actually need this one: 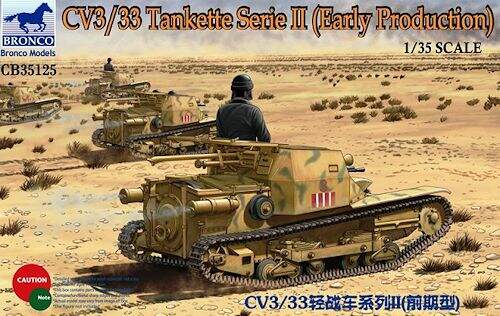 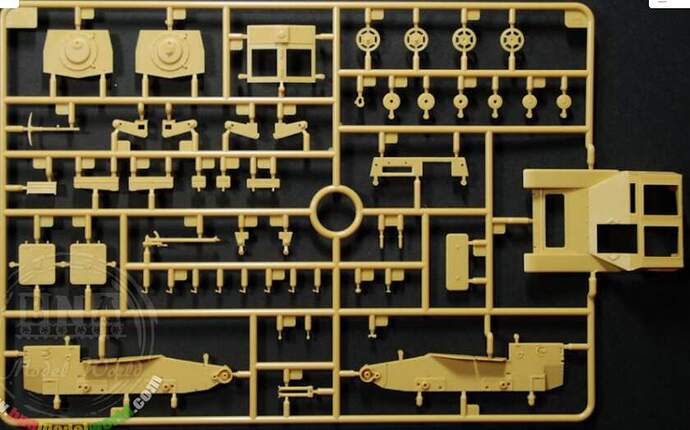 It looks like I need the long pole like thing in the middle left of the screen, so it is likely I will need these other hull components, etc…

A bit of a mess, Peter

Anyway, you can build the Bulgarian version from 35006 too. 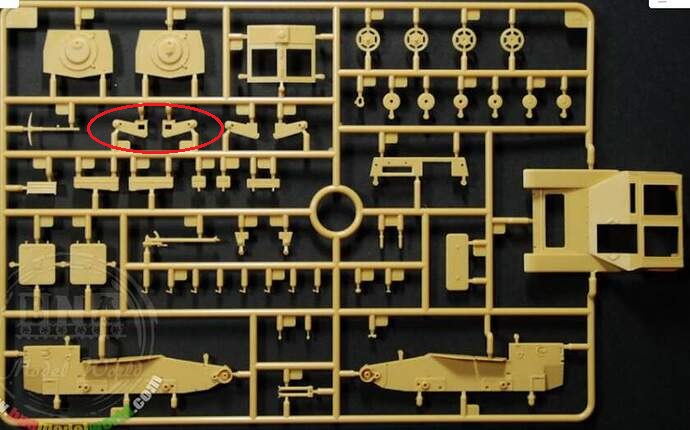 Not a difficult task- I did it in my first Ansaldo build.

There are some other small modifications too, but I’ll send you a pic where each of them is marked.

AFAIR, with the 35125 sprue Bronco corrected a mistake they made in 35006- the visor on the driver side is located closer to the front(see 35125 boxart), not centrally like the visor on the commander side.

If I recognize the long pole like thing correctly, you won’t need it- it is the tripod of the Breda MG(stored above the engine deck on 35125 boxart).
Bulgarian Ansaldo’s were ordered without armament and received the standard issue Schwarzlose MG(side note- that wasn’t a clever decision, because the Schwarzlose is water cooled thus hard to service without leaving the vehicle).

So nothing to worry about.

The tiny CV3/33 is worth the effort- here a colorized picture of a Bulgarian Ansaldo during September 1940’s retake of South Dobruja following the Treaty of Craiova: 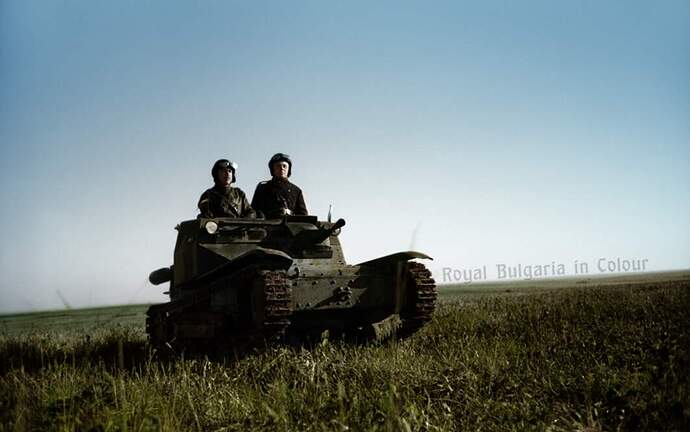 Oh, and if you want to add a figure- MiniArt do offer a Hungarian Tank Crew set(#35175) with figures wearing the same Italian tank suit, that Bulgarian tankers wore too.
I used one of these-painted by my usual service provider- in my second Ansaldo build: 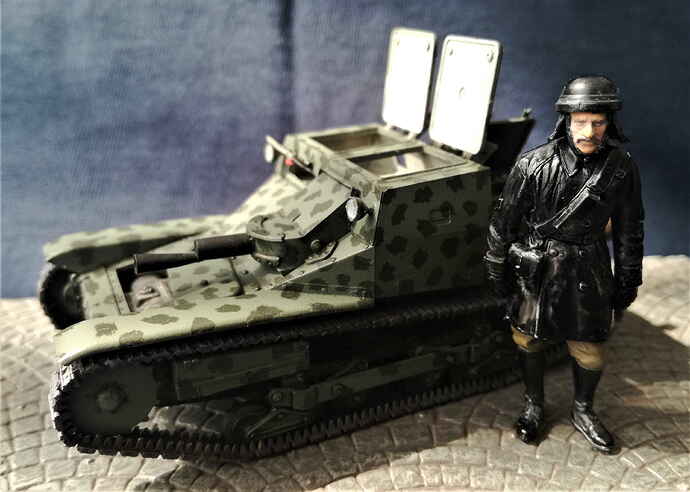 Some really great info coming out here Angel, I think everyone will be producing some top results with your knowledge of these vehicles… Which leads me onto my question

… you have mentioned the Bulgarian military at the time only put a rear number plate on ? Is that correct ?
And did they have to go in a particular position say on a Panther, would a good place be on one of the rear bins ?

Yes, all tanks had number plates only on the rear left side.
Some models(like the Vikers 8 t.,the Skoda, the Praga,the R35 and the Ansaldo-FIAT) had the last digits of the reg. number painted on the turret/superstructure sides.

The StuG III’s had their number plates at the front super structure, to the right of the gun mantlet, but some of them- not all- had a second number plate at the rear, mounted centrally above the exhausts.

I’ve seen no picture of Bulgarian Panther with number plate, but I find your idea very rational- so yes, the number plate must have been placed on left rear bin!

Thanks Angel. Looks like I am going ahead with this one then. Cheers.

Do you fancy an artillery piece build? 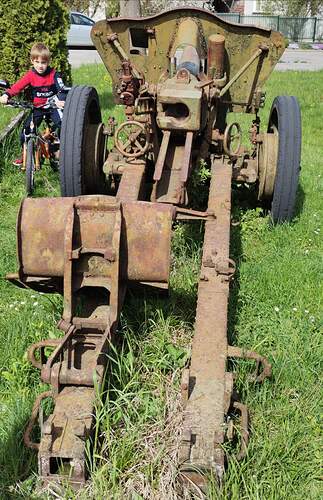 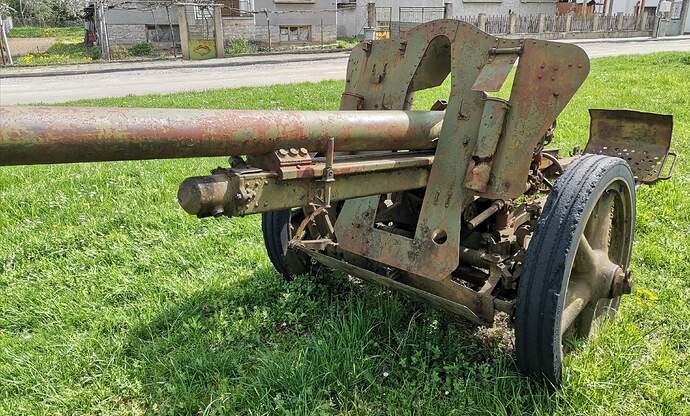 It has prod. number R4094 stamped on the breach and was built by Rheinmetal in 1940.

The memorial howitzer has steel wheels with solid rubber tyres, but these are different- the one on the left is Continental, the other Vorwerk.So not exactly the original R4094 wheels, but rather ones taken from other pieces.

I also think I see blotches of Dunkelgelb bellow the heavily weathered Green: 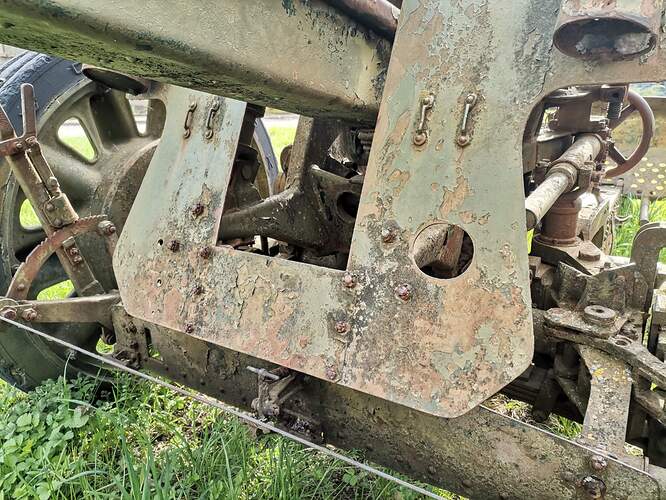 AFV Club offers 3 splendid kits that can be easily built as Bulgarian howitzers.

I consider building one of them too,

When I saw it, I pressed on the brake so hard, that SWMBO almost went out through the windshield😉

I have taken some pictures and will take more tomorrow prior leaving this small town.

All my pictures(plus the ones I collected over time) will be available to anyone, who decides to build a Bulgarian leFH18. 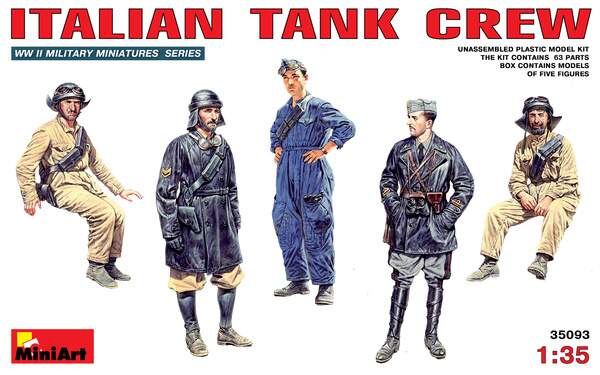 Well then I stand corrected!
Thanks Kalin,