Every day that does by I realize I am getting behind the powercurve of the latest-greatest products.

I have some biplanes in my future and bet that sewing thread and fishing filament isn’t going to look as good as it did 30 years ago. What are you using? Recommendations?

I number of our club guys love ez-line.

Thanks, men. I’ve seen ez-line and Uschi used a lot.

There is a product called EZ-Line that biplane builders in our club use as rigging. It can also be used as antenna wire. One of the guys also uses a single strand of unwaxed dental floss. Good luck.

The problem I find with EZline, is it is FLAT…Ok for use as telephone lines
on my modelrailroad but not on a static model.
I prefer the USCHI product or Fly Tying mono filament like Uni Caenis.
Cheers,

Prym and Crystal Line make an elastic sewing thread and you can always go to a mass seller such as BangGood and enter elastic thread or bead craft thread for wrists and necklaces. These are lesser expensive alternatives.

Fred, for what little it may be worth here’s my first try at rigging a biplane. Mark Builds a Biplane
Short answer, I tried several different ‘wires’ for my effort, the one that worked the best for me was 0.004" invisible thread. I drilled blind holes in the top wing, superglued the thread in place. the EZ line, and some other products were too flexible and pulled themselves out of the hole before the CA cured.
If you’re doing ships rigging or doing biplanes with thru holes in both wings, you might have totally different results.

Thank you. I hope to have some pix posted in a few days.

FWIW, this is my approach to rigging my WNW Sopwith Camel. I’m using a combination of Infini elastic line and 2# monofilament fishing line. I’m making the ferrules out of short sections of .5 mm Albion ni-sil tubing. The eyelets are made out of very fine copper wire salvaged from woven shielding cover on some 300 ohm video / antenna cable.

I’ve used the elastic Infini line (similar to EZ Line) for the control wires since it doesn’t put much stress on the control horns. For the bracing wires that can be snugged tight, I’m using Chameleon 2# test fishing line.

I’m still a neophyte at this rigging stuff (this is the first rigged biplane I’ve built since about 1970), and I got all of these techniques and materials from other online articles. I don’t claim any expertise, but these materials and techniques seem pretty well developed and easy (if tedious). 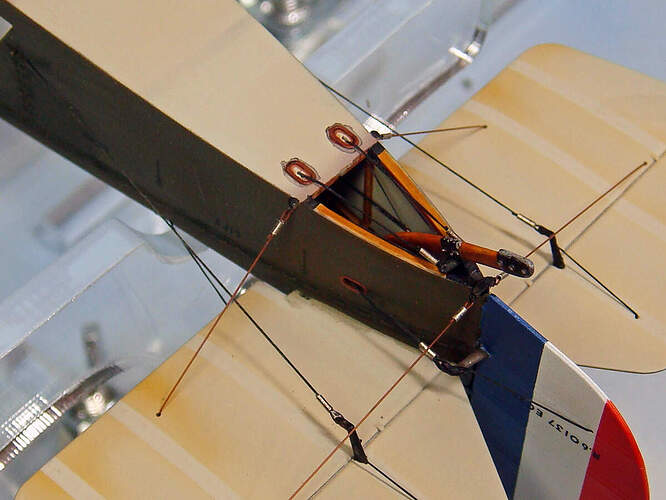 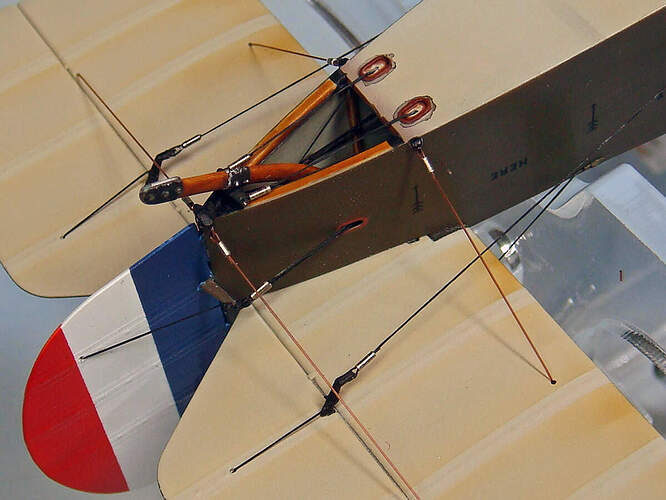 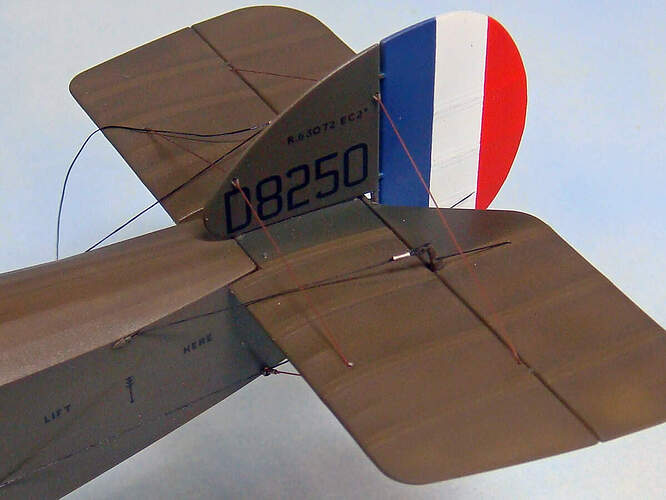 I’m a old school stretched sprue kind of guy. Works for me anyway. And yes…if you are wondering…I am able to order off of the senior menu at restaurants!!

Nothing wrong with that, at our club meeting in Jan, a ship guy was demonstrating his technique for stretched sprue for ship rigging. Instead of pulling from both ends, he stuck the heated end to the box lid and pulled. The distance and consistency was far superior to pulling with both hands. The speed of the pull set the thickness. He would add lines with slack in them and use a incense/punk stick to tighten. That technique to me seemed better then any products one can buy. That said @SdAufKla build is real pretty but not sure that translates to the smaller scales.

That said @SdAufKla build is real pretty but not sure that translates to the smaller scales.

Thanks for the props. When I was researching techniques and materials while getting ready for this build, most of the articles and SBS tips suggested that the consensus among small scale aircraft builders was that one of the elastic threads (EZ Line, Infini Models, Usche, etc.) was the way to go. Most of those guys used a technique that anchored one end of the thread in a “blind” hole and the other end was passed through a “through” hole. The excess was then trimmed and the hole filled (usually with just a small dab of paint).

There are a number of very fine gages that can be found for these elastic threads, too. For example, in my photos above, the Infini Models line that I used was the LARGEST size they sell. They have several smaller sizes.

That actually motivated me to use a similar technique on some of the fuselage framing (inside the tail skid well) and the control surface supporting wires (on the trailing edges of the control horns).

Interestingly enough, the second most common approach with the small scale plane builders was to just simply omit most or all of the rigging under the idea that there’s no way to accurately replicate it in the smaller scales and if it could be done accurately, it would be essentially invisible.

After these two general approaches (which seemed to be about equally represented), there were a lot of other interesting ideas and techniques used by the outliers. One guy did some really impressive small scale rigging using HAIR as the material for the lines. Several used vey fine stainless steel wire originally intended as a suture for surgery.

Anyway, the majority of small scale rigged aircraft I studied used one of the elastic thread materials.

Finally, another research / study direction are modeler who build age-of-steam and newer ship models. Those guys have their own collective, community ideas, techniques, and materials for replicating the rigging on their ship models (many of which use the same kinds of elastic thread materials). Anyone looking for ideas about rigging materials might find some amongst the ship modeling crowd.

There is a guy in our club who uses a single strand of unwaxed dental floss for his aircraft antennae. Apparently he got the idea from a ship modeler. Good stuff here even though I don’t build stuff that needs rigging. Never know when something might come in handy.

Here is an example of some pulled strands. I plan to use them on my 1/72 F6F antennae. 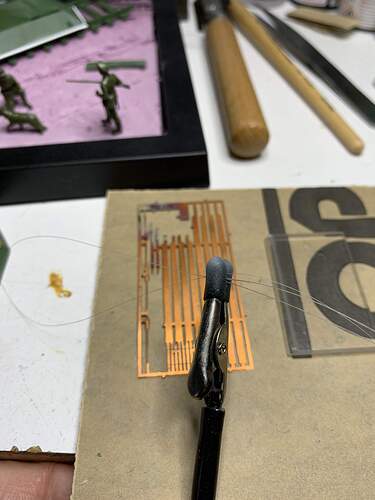