OK a dumb question. Why does ‘everyone’ use rust colours on their AFV models? During WW2 many AFV’s weren’t old enough to rust. (Except after fires). Modern AFV simply don’t rust. Or do they?

I’m asking because I’m applying black pin wash to my Australian M1A1 build. I have a bottle of rust pin wash sitting front of me begging to be used. Rust would certainly give the model a lift. But rust is wrong on a modern AFV. So do I use rust or not?

For a M1, except for a very few Marine tanks you would not have rust on them and that’s cause we drive them through the ocean and spent months at sea on deployment.

Model building, much like realistic painting, represents a juncture between artistic expression and the desire to accurately represent historical reality. In some ways, the two elements complement one another. In others, they conflict. Each modeler brings a different level of skill and unique point of view to the endeavor. As a result, final results vary widely.

Modelers who favor the artistic approach often add rust patches and streaks because they wish to create visual interest for the viewer at the expense of some historical accuracy. The thought process goes something like this: If I pursue pure accuracy, the viewer will briefly glance at my model then move on to the next. If I add a healthy amount of artistic interpretation to my work, the viewer becomes enthralled, spending much more time examining the rich colors and textures of my effort. In this way, the artistic model inspires more than the realistic model.

You will need to consider these factors and reach your own conclusions. There is no universally correct way to create an image of historic reality. There is only personal preference.

Or, you could be like me, goof up, and say, “I totally meant to do that. I’m an artist.” (Pronounced Ar-teast) There is a whole school or art for people who cannot do art. It’s called Impressionism.

One place you can use rust, especially a wash, is on the tracks. US tracks in particular, will get at least a light bit of rust on them pretty quickly, even in the desert. Most of it will be ground off once the tank starts to move through the sand. In a non-sand environment, tracks will get a pretty good layer of dark rust on them. Also, places that get a lot of wear, like the hinges on the side skirts, will get some rust. It’s not much, but it’s there.
Ken

FWIW - my preference is wash/pin wash(es) of raw umber (and other similar colors) of various intensities. Not happy with a straight black wash of any sort - too harsh in,1/35.

IMO the current trend of rusting effects and lots of chipped paint is overdone by most modelers. While they are visually interesting, I prefer a more subtle approach. If you look at tracks on construction equipment for example they really aren’t rusty, more of a flat medium grey with shiny highlights and dirt/earth in the recesses. I believe most tanks in WWII didn’t survive long enough to get rusty, and except for African camping vehicles didn’t show the extreme weathering presented by many modelers.
That’s just my opinion and to each his own. Model what makes you happy, that’s what this hobby is all about after all!

There is a whole school or art for people who cannot do art. It’s called Impressionism

…Though I do agree mostly with what Dramraska said. except that it’s written purely from the point of view that the modeler is modelling for others and not themselves. Which is totally legitimate, but only part of the (possible) story.

Does extensive, realistic (but probably inappropriate) weathering look awesome? Yes? Then do it. No? don’t. Screw the viewer.

Hey, Mousemuffins. To be clear, by ‘viewer’ I meant anyone looking at the object of art, including the person who created it. I was not suggesting anyone should create models solely to please others. In my opinion, the majority of artists, perhaps all artists, filter the creative process through their own internal lens of desired outcome while simultaneously seeking the acceptance and praise of others.

Your comment with regards Impressionism made me laugh. My siblings and I endlessly foil over that subject.

Ive spent way too much time looking at images of Australian M1A1s on the internet. Ive concluded that there are very few examples of rust or rust coloured stains on them. But Ive found just enough examples to justify a touch of rust here and tjere. The trick will be tje where and the how much.

As always your project, do as you wish. Forgot to add that before. @tankerken is correct about the tracks. I was only thinking about the hull and turret. Aussie Abrams are too new to really get much rust on them. There is a good chance that the “rust” you are seeing is dirt mixed with oils, lubricant, fuel and not really rust, imo.

Here is the rustiest Abrams known to exist.

Does anyone have the ‘companion’ photo to this amazingly worn/rusted/filthy Marine M1? I had the other photo, which was taken from the right rear of the same tank. I have the image SOMEWHERE, but darned if I can find it! I’m assuming it was not that hard to find. I really want that second image as I plan, in the not too distant future, to build this nasty tank! It’s gonna be a SUPER FUN build, methinks!! [image]

Again this is limited to a small set of tanks used by the Marines till Frenchy shows another example that proves me wrong.

I agree with Damraska on beeing an artist and artistic. But, also, as shown on this Tiger from a museum in Russia, 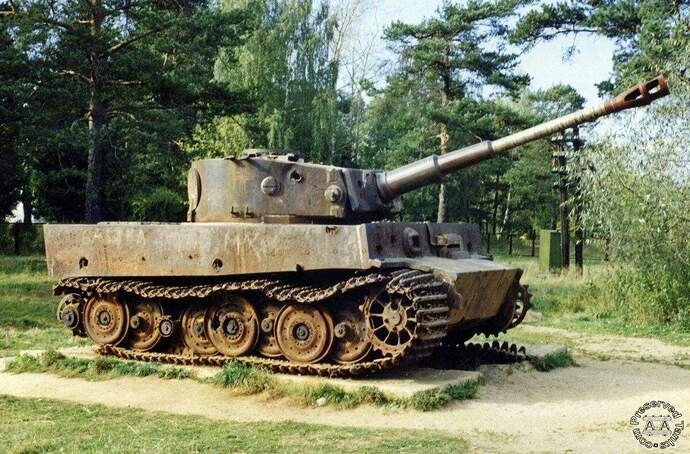 Sorry, wrong foto. Foto2: This is my model. This is the correct foto. 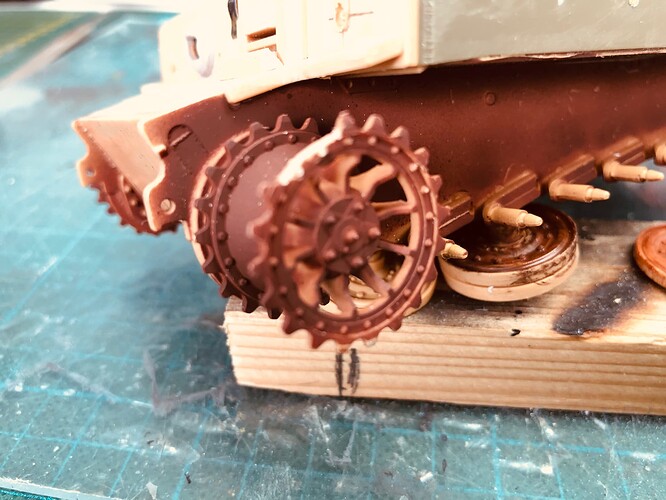 I wonder what would have happened if Leonardo da Vinci had painted Mona Lisa artistically,
her face full of wrinkles and streaks of make-up running down her cheeks, hair uneven with big
tufts torn out and her clothes in tatters …
Tells the customer that ordered the portrait that:
'Maybe it isn’t totally realistic but it adds visual interest for the viewer" 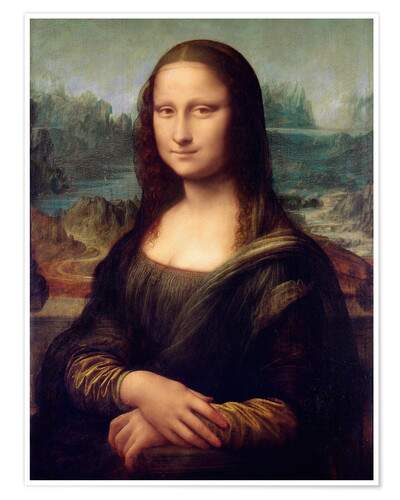 Some artist has made this, just a small step towards what I described above: 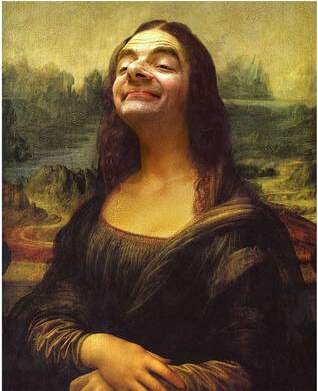 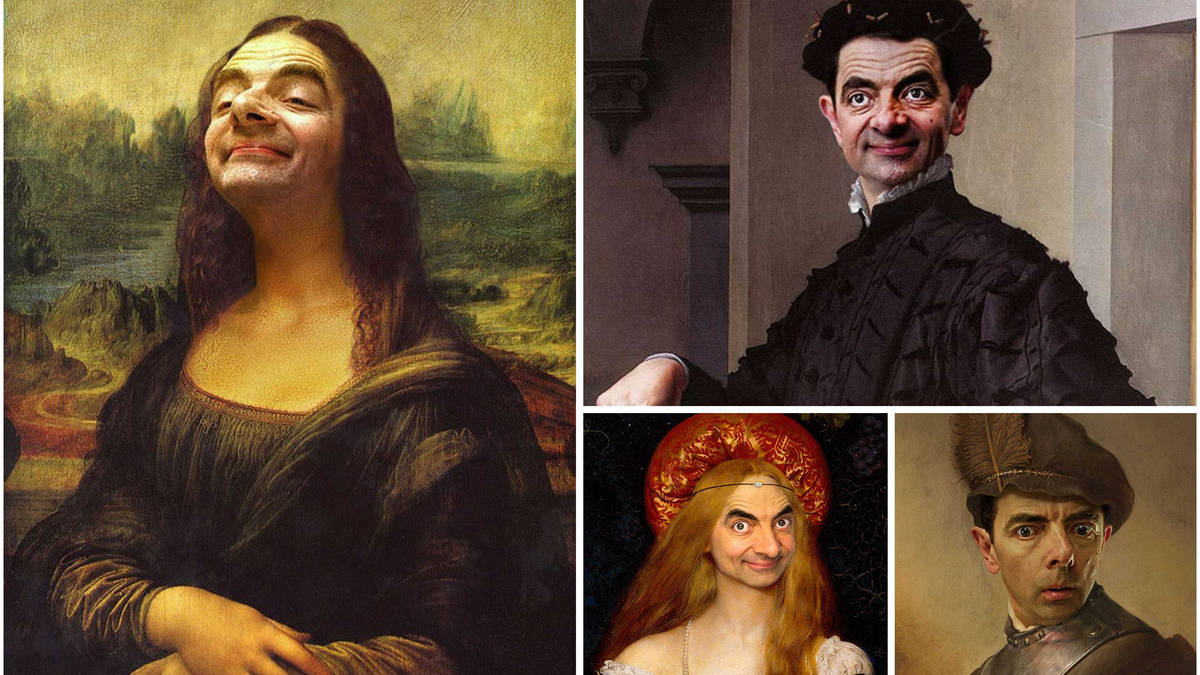 A caricature artist has inserted Mr Bean’s face into great paintings and it’s...

Rowan Atkinson’s loveably hapless eccentric stars as the subject of the greatest works of art, from the Renaissance and beyond.

No Whistlers Mother though.

Give it time, maybe it will turn up

In the Beantime, here is the original masterpiece 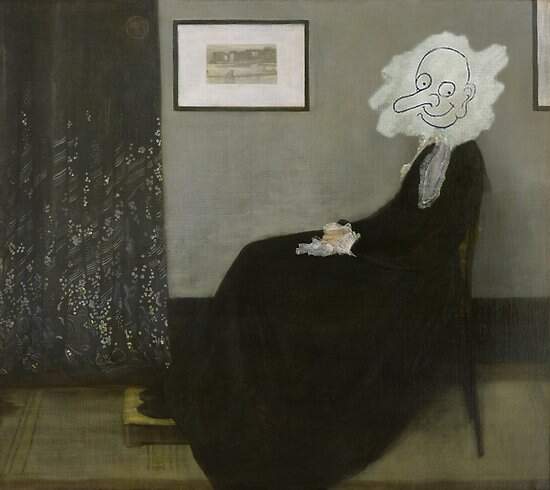 Some dirt in some areas with high iron oxide content in the surface soil
will look like rust …so it is still possible to use that bottle of rust, just call it red-brown dirt …

How much anyone wants to rust something up is up to them. Personally I use it sparingly. What I find amusing is when aluminum hulled vehicles are adorned with rust - M109 series, M113’s, HMMWV’s… Or when rust is streaking down from a bolt on an aluminum hull. The thing is, on most vehicles I’ve documented bolts have been replaced with grade 8 hardware. They just don’t rust. I prefer realism, bland as it may sometimes be, to overdone techniques administered by DOTKA - Drinkers of the Kool-Aid.