OK, so have, in the past built Panzers i-IV so now for a V. Decided on the RFM Panther Ausf F as I wanted to use the night vision on a what-if Super Pershing at some point. Not 100% certain how this will end up. It WILL be what-if paint (like the amusing hobby Jagdpanther II scheme (dunkelgelb with white angled stripes) but may do some of it in factory undercoat with white markings. I will also look at additional armour (a least the usual panther stuff on the wheels, maybe also anti air screens and possibly even on the turret… 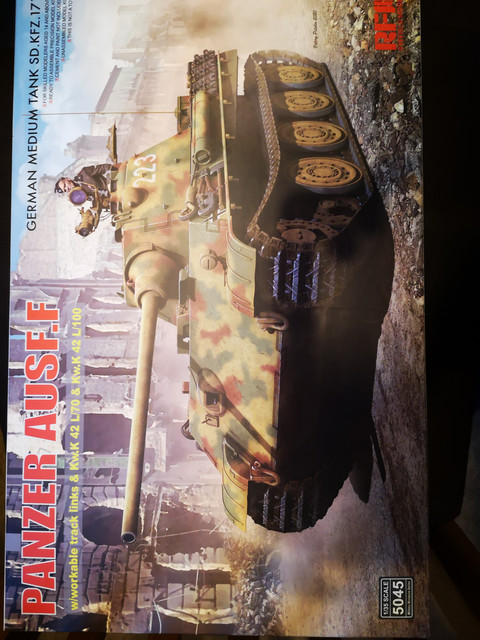 so far the 2 sides done 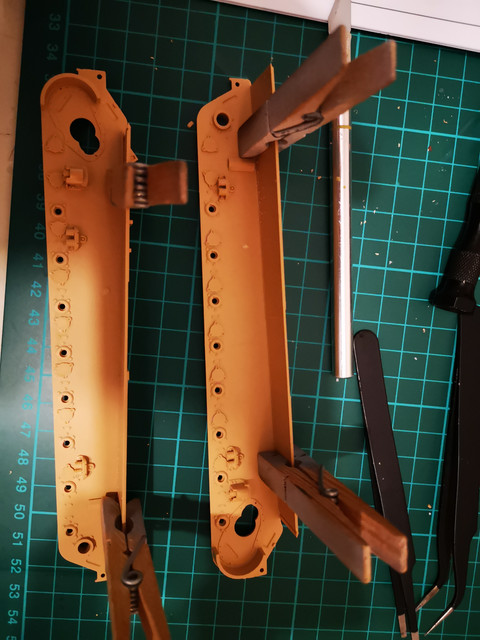 I’ll be watching this; I’m beginning to come round to the concept (1946-onwards) and may well dabble. Like I need an increase to the Stash(!)

I always like a good what-if. Following this thread with interest.

Following … Love the whole what if train of thought …

no interior but completed the torsion bar suspension: 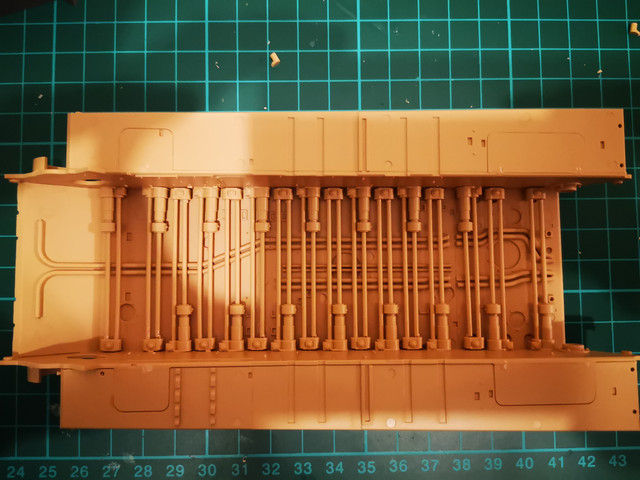 and on some spare plastic trying some cast armour texture - any thoughts: 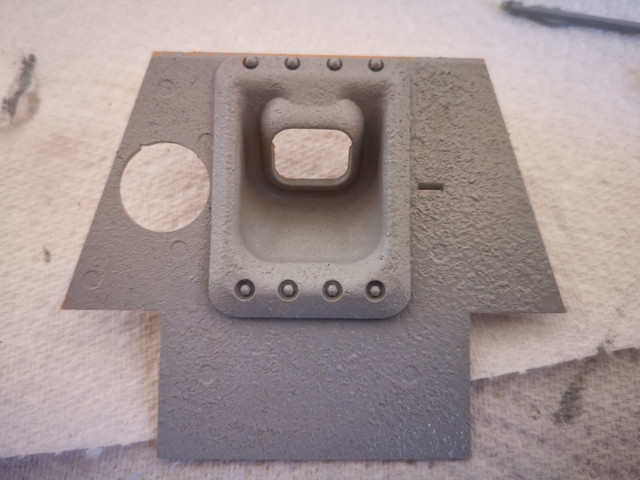 Is it the lighting or does the texture look heavier on the right side?

so this is how the mock up cast steel looks in red oxide (Vallejo primer, need to find an alternative as that has just run out, time to raid MiG AMMO again) 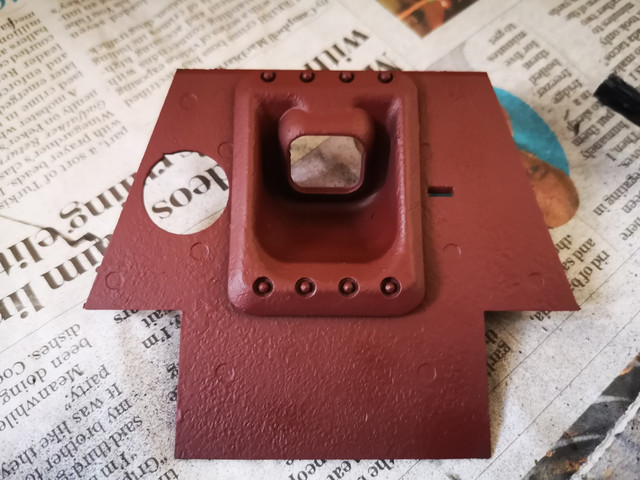 Might want to consider that the Panther was constructed from rolled steel plate, not cast steel, apart from the cupola and mantlet. The turret sides were bent in a press prior to hardening.
Rolled plate was pretty smooth up to about 80 mm thickness, where small visible pockmarks sometimes appear. If I want to simulate these, I chuck a small Dremel burr into a pin vise, and twirl it a few times in random spots. If you use the actual power tool. you’re apt to go too deep, or lose control and skid the bit across the surface. Occasionally, small scabs of metal adhered to the surface during the rolling precess, and a tiny dab of putty can simulate this.

oohhh ok - so smooth hull and turret then cast mantlett and cupola (how about exhaust part that attaches to hull?)

Both cast and welded plate exhausts were seen on Panther Ausf. G, and many kits include a choice of either. If it’s rounded, it’s a casting. If it has square edges, it’s welded plate. Anyone’s guess what a future Panther F would have used. Check out photos of preserved Panthers to get an idea what the surfaces looked like, since texturing is easily overdone on a scale model.
As an aside, Hitler had demanded that Panther F tanks produced after October, 1945, should have an 88 mm gun. MAN’s engineers complied, and produced a revised turret design, which would have been horrendously unbalanced (there’s a reason the King Tiger turret had that long bustle on the back). They didn’t object, though, because they knew they would never have to build it. They presented their design, and Hitler gave them a little award on April 15, 1945, by which time the MAN factory was already in American hands. The MNH factory had been seized by the British, and the Soviets were a week away from the Daimler Benz factory outside Berlin.

after a number of discussions, I decided that only “odd shaped” parts were cast… so these have been coated in Mr Surfacer 500. Hull is just placed on for now… 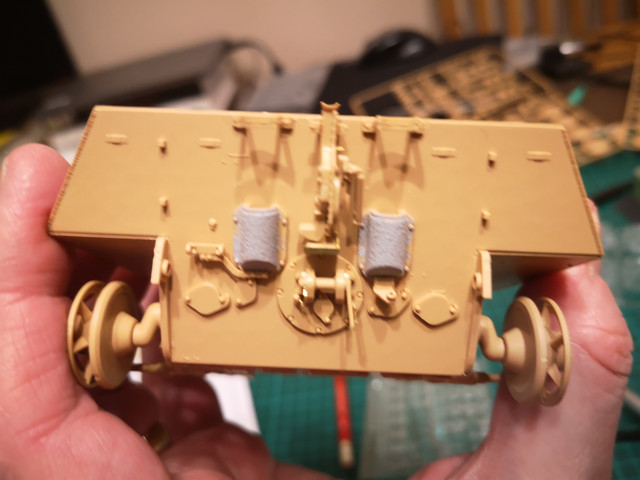 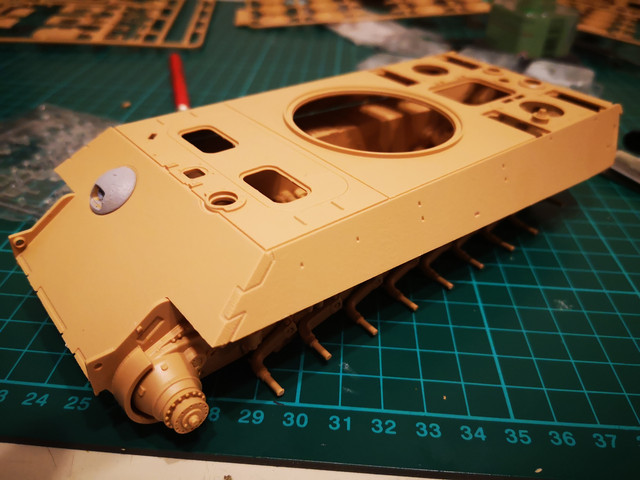 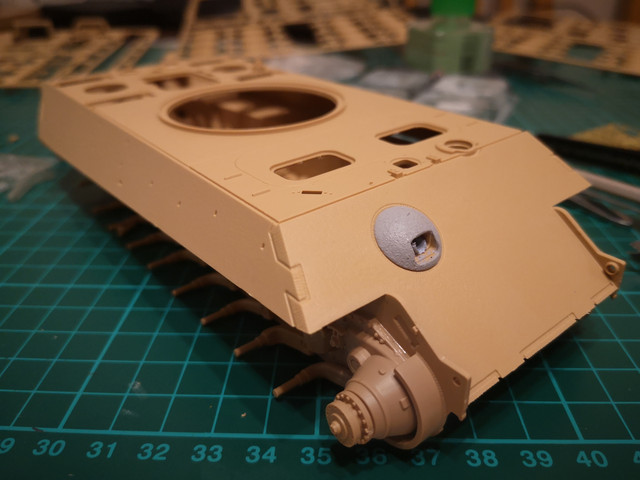 a fair chunk of progress… the major components on the hull and turret are now done and I have one run of tracks done (they are workable). As you know, I love adding just a little extra so have done some mesh screens (turret and main engine deck vent)… think they work OK… 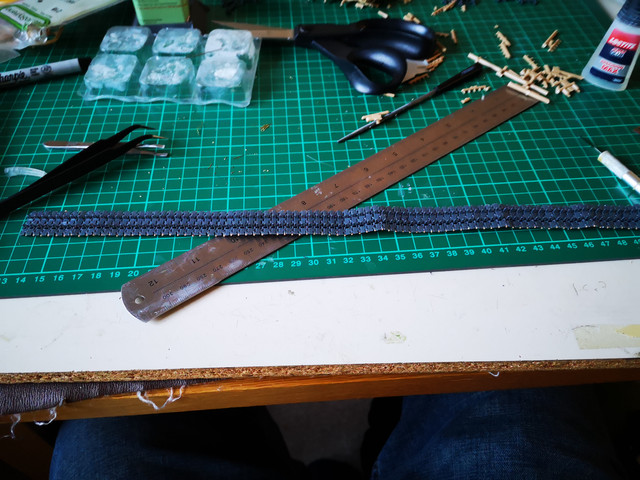 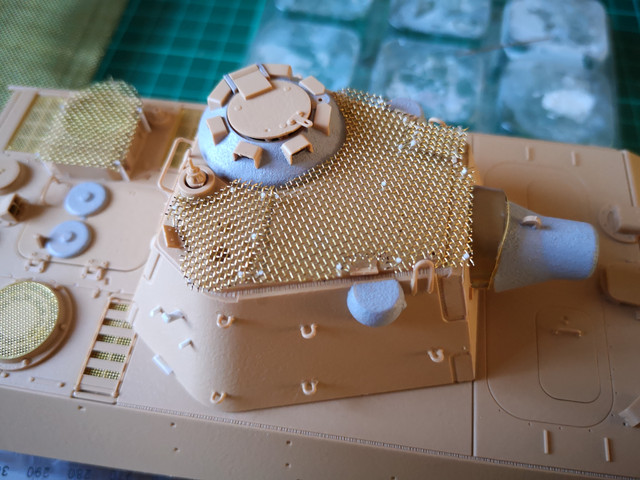 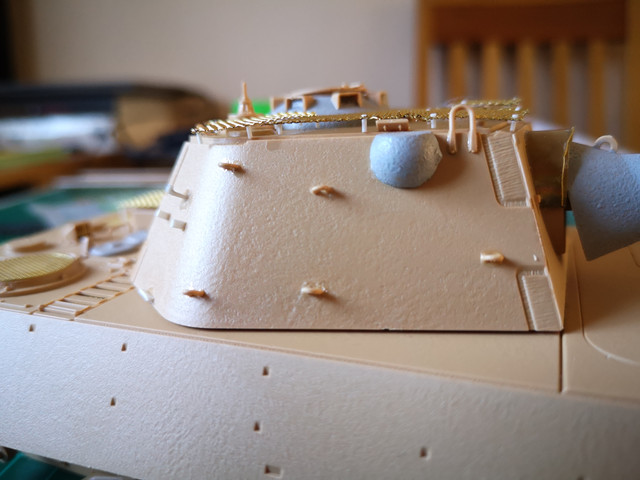 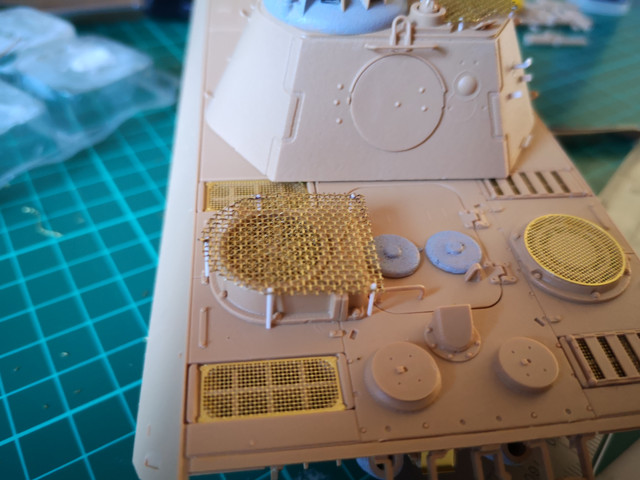 Are the kit tracks supposed to use metal pins? 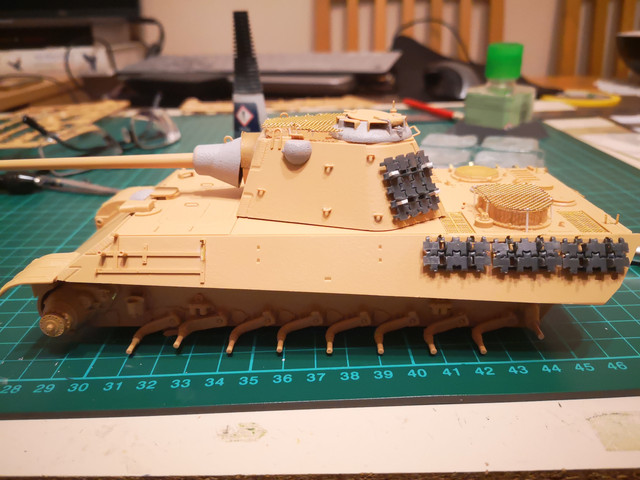 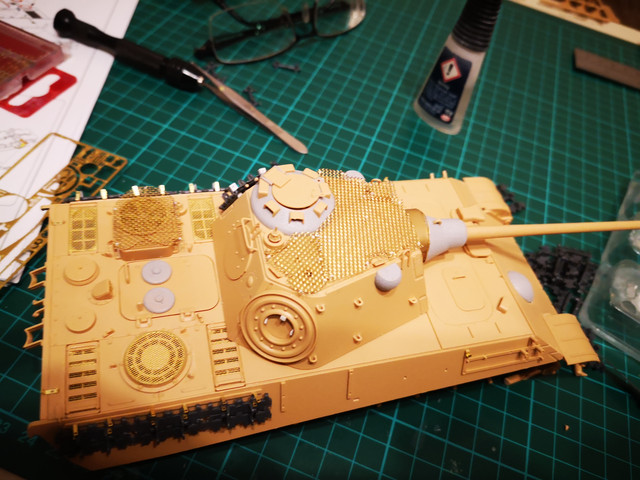 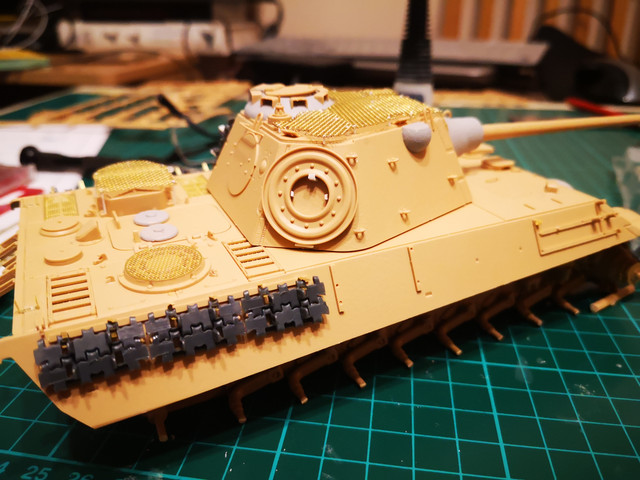 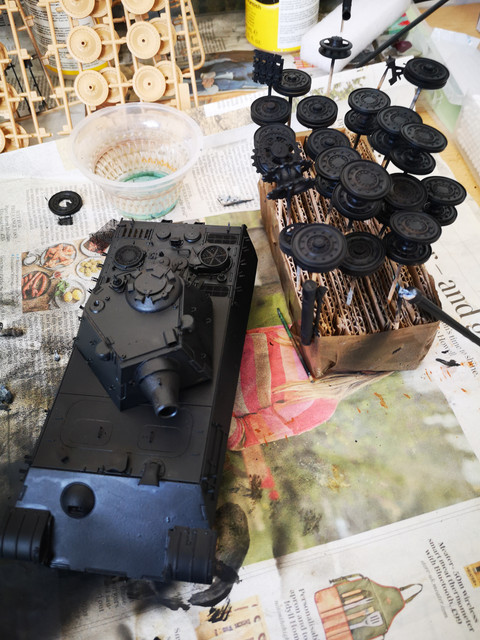 Dunkelgelb with mottled lighter shades for the hull (still need to work on the camo scheme, just faded green I think)

ash grey and one shade mottle for barrel 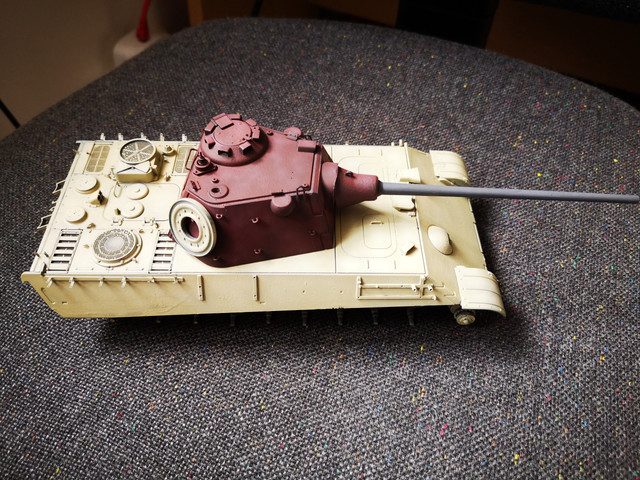 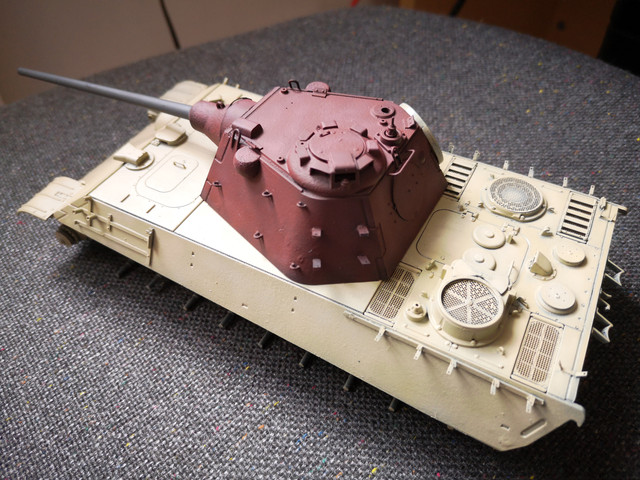 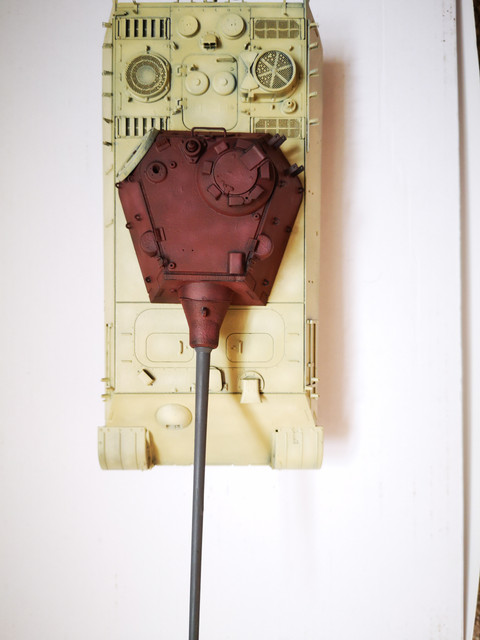