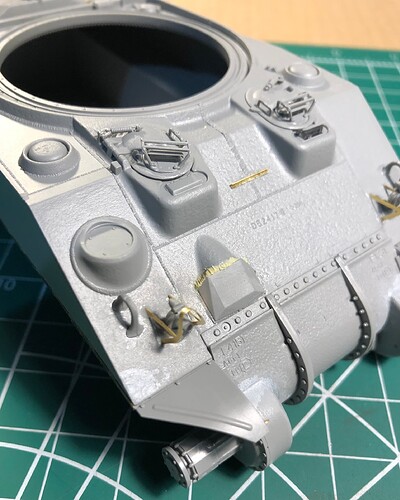 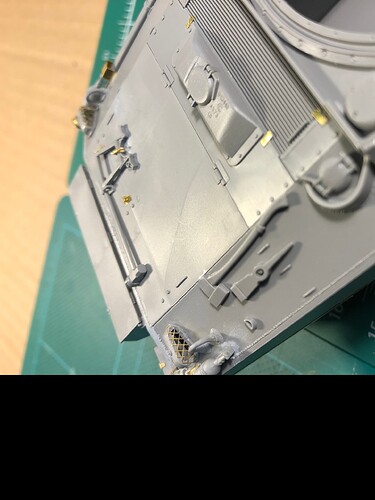 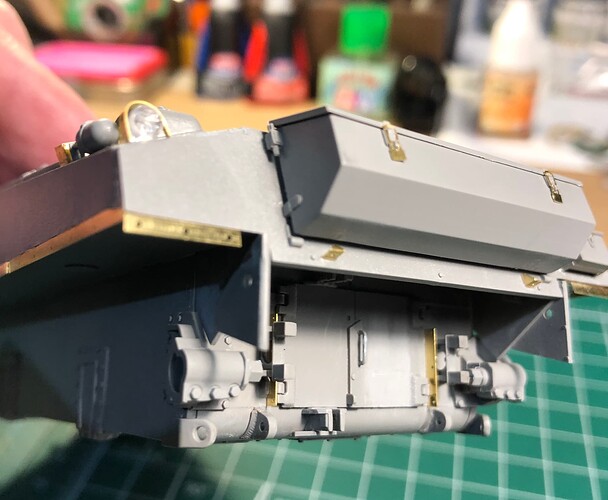 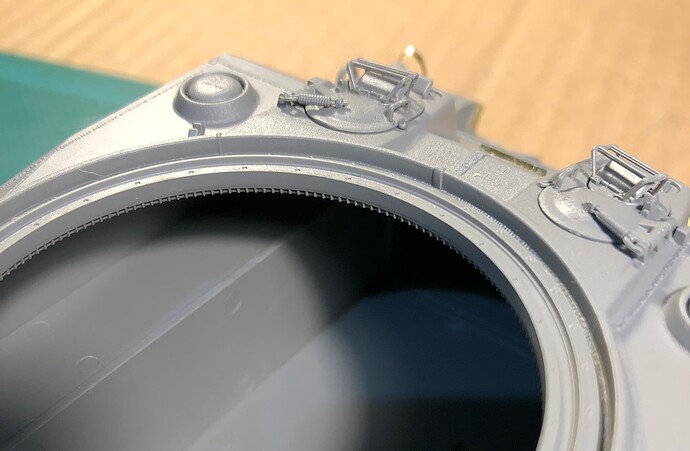 6E18C99D-CB70-47DE-B4FD-F77605853578_1_201_a1920×1255 105 KB
Check out the tiny molded teeth for the turret traverse mechanism located in the turret ring, as well as the very fine bolt details. Unfortunately, all of these details will no longer be visible after the turret is installed, since RFM has designed what appears to be a ‘snap locking’ mechanism on the bottom of the turret which will not allow the turret to be removed from the hull after installation.

The fine quality of the molding in this kit continues to amaze me… as well as certain design decisions such as the non-removable turret.

Don’t know if you still need tracks, but the type you need for your Firefly are the T62 tracks, curved steel chevrons with three rivets across the face. Panda Plastics makes them. They only sell full sets, though. The track block is a single piece with pins molded in place, and the connectors simply slide over the ends. The fit is snug enough that you can assemble quite a few without adding cement (though probably not an entire run).
http://shermantracks.com/catalog/t62.html

Thanks for the info!
I actually acquired a full set of T62 tracks from RFM, which are sold as a separate kit. They should work, although since I’m mounting them as spares on the front hull and turret, I will have to fashion some connector pins from brass wire or such. 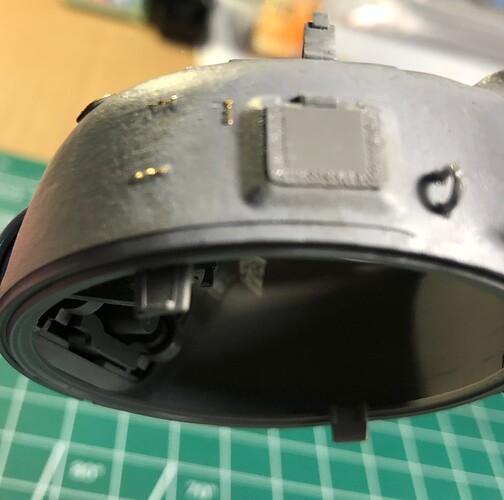 95B2395F-5EDC-4E68-8D14-CD77017DB6D7_1_201_a1920×1901 137 KB
Here’s a look at those ‘snap in’ retaining clips on the bottom of the turret which I referred to earlier. The upper hull/turret ring area doesn’t have the 2 retaining notches commonly seen on kits such as Tamiya. As far as I can tell, once you install this turret on the hull, it cannot be removed. I will probably modify one of these retaining clips in some way in order to remove the turret if necessary.
I have not built any RFM kits before this one. Is this a common feature with this manufacturer?

Also note the tiny photo etch retaining loops on the outside of the turret near the pistol port. I managed to launch nearly all of these parts in to the ether during assembly, that’s why there are so few remaining. This won’t be an issue since this area of the turret will be covered by spare tracks. 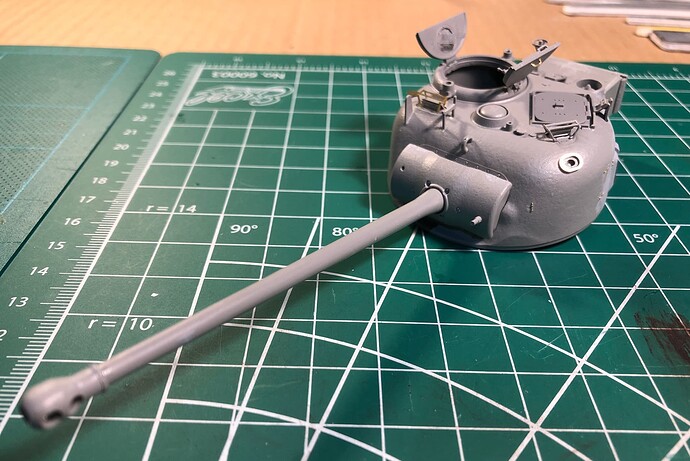 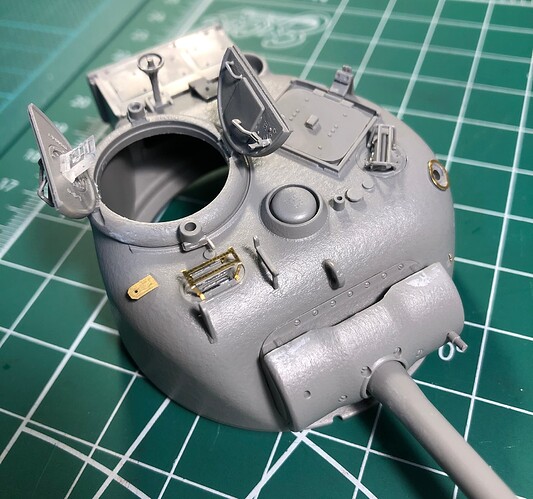 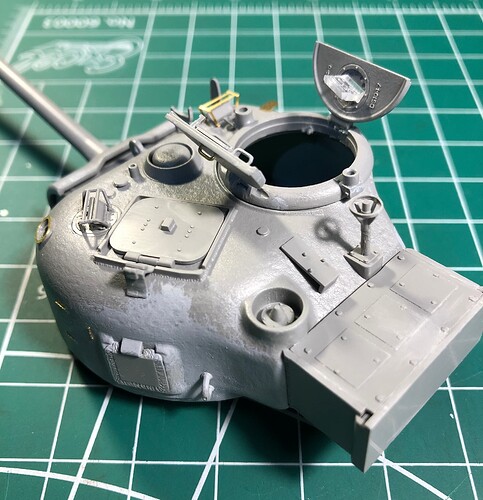 You have the choice of using either plastic or photo etch periscope guards. I had to use photo etch for one of these after I accidentally broke one of the delicate plastic parts when removing it from the sprue. I have decided against installing the beautifully detailed .50 cal. Browning on the commander’s hatch. I have located only 1 photo of a Polish Firefly with this weapon mounted upon the turret, and that photo was taken during pre-invasion training exercises in England.

I have not built any RFM kits before this one. Is this a common feature with this manufacturer?

Not in the RFM kits i’ve built. On the Panther G I just built, despite following the instructions and being very careful, the turret simply wouldn’t fit into its ring, the turret diameter was too large. Serious amount of filing required…

Maybe RFM saw this error and now make all their turret rings so large, a retaining clip is required!

Well, for the most part the tank itself is completed, with the multiple subassemblies remaining separate for the initial priming and painting. Since I do my airbrushing in the garage, and the weather has been cold and damp for the past several weeks, I am in somewhat of a hiatus with the actual build of the Firefly itself. 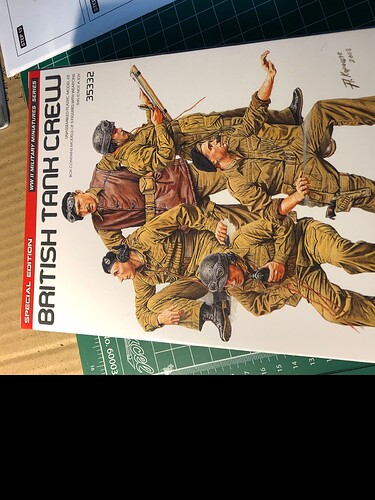 6571FEDF-EF7B-4F4E-AE47-A03F49B0FF231920×2560 383 KB
That being said, I’m now starting to build one of these figures (the seated fellow speaking in to the microphone) to be the T/C for the Firefly. I’ve searched online for days to locate a specifically designed late war Polish tanker with no luck, so I’m hoping this ‘British’ fellow will be acceptably accurate.
Also, I am going to start constructing the additional spare tracks and other stowage to be added later after the tank is painted.

Sorry about the sideways photos in this post… that’s not the way I intended to post these images, and I am not clever enough to figure out how to change their orientation.

We’ll you’ve gone and caused me to make a purchase of this fine kit! You’re model is coming along great! I won’t be receiving my example until around February but that’s fine as I have not had any time to build anything in the last half year. Keep up the good work and really nice pictures and thanks so much for posting your work here.

Well, I received my kit last Friday and upon opening the box I was very please to see how well they have engineered this kit. The molding and detail is crisp and clean, my example came molded in a Tamiya like yellow color, but that’s not an issue. When I do get to it I just know I’m going to enjoy it!

So, the Firefly is basically in a state of several completed subassemblies which are awaiting priming and painting. I am using this short pause to begin assembling and painting the tank commander for the opened T/C’s hatch. 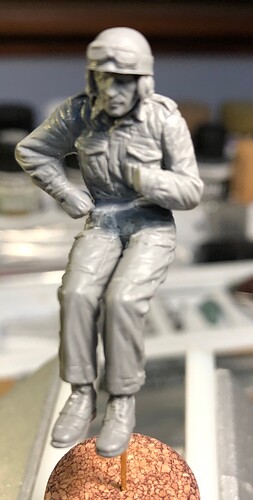 477CC687-F67B-4021-9D5B-CACD303020F2_1_201_a1478×2915 201 KB
I am planning on using this fellow from Miniart’s British Tank Crew set (#35332).
Unfortunately, the separately molded (!) left hand of the figure, which contained his radio handset, took flight and vanished in to the carpet or some other nether world.
I’m seriously reevaluating my choice of this figure for the Firefly, however I’m not looking forward to scouring the internet again to locate a T/C for this vehicle.

I am open to any suggestions for a suitable figure to use to portray a Polish tanker during the Normandy campaign.

On a side note, this is the first time that I have ever purchased on of the Miniart figure sets. Frankly, I am not impressed. The mold seams are very prominent, especially compared to other manufacturers’ figures. The separate hands and accessories are extremely difficult to clean up and the arms and legs do not match up very well with their adjacent locations on the figure.
Take a look at that figure’s right hand, that isn’t a glove he’s wearing, that is a poorly molded bare hand.
Too bad the figures are no where near as attractive as the box art. 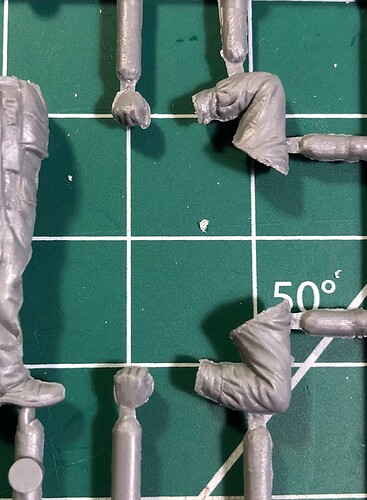 Forgive my ignorance but is there anything about this figure that makes him specifically Polish?

Unless you’ve got your heart set on a helmeted tanker, there are a few other resin options out there which might suit your needs.

Ultracast is a Canadian site, but these might at least give you an idea of what options you may have.

Wow!
Thanks for the link to that site… This is exactly what I was looking for.
I was actually preferring a tanker with the beret upon which I could paint the Polish eagle insignia.
British or Canadian, I’ll find a way to make him look Polish.

Thank you everyone for the quick replies!
I just ordered a nice looking British T/C figure from Ultracast. I’ll post an update in a few weeks after he arrives from Canada. 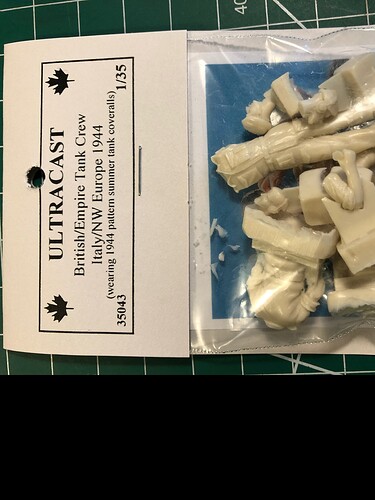 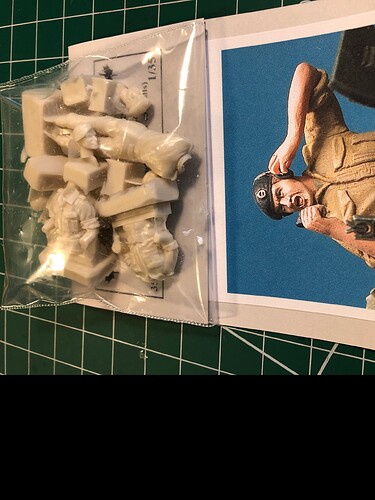 Thanks to some suggestions from the folks around here, my Firefly’s tank commander has finally arrived and is about to be assembled. After adding the appropriate shoulder flashes and a white eagle to his beret, he should look ‘Polish enough’ for my build.

That looks like an excellent figure yuri. I don’t know what happened to Miniart but their figure sets seem to be hit or miss. Their earlier sets were better. For instance, their modern US Army tanker set was very disappointing to me , just my opinion. The US Marine set seemed better. I have several of their earlier releases from WW 2 and they are much better. The quality has gone down. Again just my humble opinion. 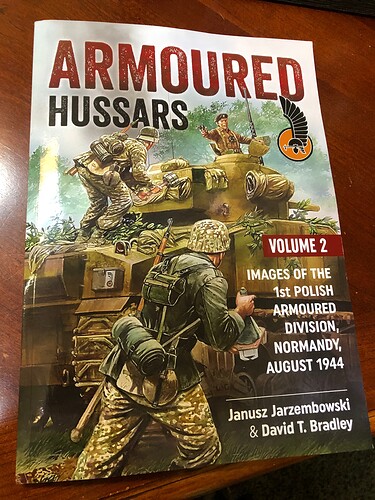 While awaiting the drier, warmer weather so that I can (finally!) airbrush the Firefly…
I accidentally stumbled across this excellent reference book which is very specific to the unit of whose vehicle I am modeling. Very well written, with a foreword by a British tanker who actually witnessed this unit in action during the fighting at Falaise. With perhaps one or two exceptions, all of the photographs in this book are ones which I have never seen before. Of particular note to my build, apparently the majority of the Polish Shermans in this unit had the .50 cal. guns mounted on the turret. I am reconsidering my decision to leave this weapon off of my Firefly based upon this ‘new’ information.
Just goes to show that it never hurts to have too many reference materials.

I have this kit in my build stash, and i will be returning to this thread for progress reports, along with ideas.