Austrian Bundesheer released a series of videos on their weapon systems.
https://www.youtube.com/watch?v=T1AS8EGNMyk
This one describes the Schützenpanzer Ulan, a very capable system. I been in one back in 2018 (around 100 pics;-))
Also note the new Austrian Multicam uniform. I need a Ulan kit NOW!!!

Well, the base kit is available - or at least according to Scalemates:

'Probably need a few mods to bring it up to the spec shown in the video clip. All a bit depressing when the Austrians can make the system work yet the Brit Ajax scandal continues.

Hi Brian,
I have some mixed experiences with NIMIX. I bought their Patriot kit some decades ago and it was plain crap. I met the owners family a Kulmbach Zinnfigurenbörse some 10 years ago, really nice guys. If their are in business and the kit is not that expensive, I might give it a try.
H.-H.

Well, good luck! It would make an interesting build on this site, that’s for sure.

I think they have been told to fix it quick (which is impossible) or bin it (more probable)… and hey, its only cost a few hundred million upto know. I am sure the MOD can plough a few more million into it before they pull the plug

I dropped them an email. I report about the outcome. What this Ajax scandal? Can you tell more?

This was delayed due to design and testing problems. Test crews were required to wear noise cancelling headphones and be checked for hearing loss at the end of operations and the vehicles were unable to reverse over obstacles more than 20 centimeters high.[20] As of March 2021, the British Army had taken deliveries of the Ares variant, whilst 12 Ajax variants are going through acceptance testing.[21] In June 2021 it was revealed that trials of Ajax variants were halted from November 2020 to March 2021 due to excessive vibration and noise, leaving crews suffering from nausea, swollen joints and tinnitus. Test crews were then limited to 105 minutes inside and 20 miles per hour (32 km/h). The excessive vibration while moving was also damaging electronic systems and preventing armament from stabilising. Suspension issues on the Ajax variant meant turrets could not fire while moving.[22][23] The hulls were of inconsistent lengths, and had non-parallel sides, which means the vibration problems do not manifest in a uniform manner making it exceedingly difficult to determine if vibration is from a fundamental design problem or build quality failures.[23]

A leaked report doubted whether the Ajax Armoured Vehicle programme would be delivered on time and within budget, and suggested that there was a real risk that the vehicles’ credibility would be questioned by troops, and morale impacted. General Dynamics UK refused to comment on the report.[24]

In early 2021 MPs on the Defence Select Committee issued a report critical of the state of the Army’s armoured vehicle programme—including Ajax—which had spent hundreds of millions of pounds with little to show for it. Some defence experts questioned whether Ajax would ever enter service, calling it “the Army’s Nimrod MRA4” (an upgrade of which never entered service and was scrapped in 2010 at a cost of £3.8bn).[24]

The Times reported that as of mid-June 2021 the problems with noise and rough handling were so serious that all trials involving the Ajax had been suspended. The paper quoted Francis Tusa, editor of Defence Analysis, concluding that the British Army, “are spending good money after bad for something that is arguably unfixable.

A classic comedy of errors …

So General Dynamics UK were developing these based on the ASCOD?

Yes, Not sure how much of ASCOD was kept … I would think most of the running gear and lower hull design with some tweaks, but possibly a new power pack for UK jobs ? and a new turret and internal intelligent battlefield systems …

A sad fact is that such procurement fiascos have been running now for around 30 years or so; no one ever gets sacked, no military officers get demoted, and certainly no Civil Servant goes unrewarded. The officers concerned continue to climb their way to rank, awards and decorations, while the whole Army suffers.

I somethimes think that the Army should take a leaf out of the Navy’s book from 1757 (Admiral Byng) and shoot a few senior officers.

I think most of this one is at Gov and manufacturers level… as the military geniuses learnt their lesson with the Cr1 nightmare when they accepted that at face value and ordered that Cr2 would not be accepted on the delivery day unless it was 100% combat ready or Vickers would be fined £1m per day from its planned delivery date until it was ready. I think that made them work a bit harder lol.

That’s fine as long as those who get the contract drawn up know what they’re doing (and I love the thought of the mandarins at Vickers sweating over that!) and apply sufficient rigour; it’s when they don’t and the manufacturers say something on the lines of, “Oh, you want it to resist 14.5mm - well, you never said that in the contract; that’ll be an extra 6 million spondoolies to fix thank you very much” etc.

At the end of the day, somewhere in the machinery at Abbey Wood or the MOD, a chap in uniform signs this off, and they’ve become sloppy - for something like 3 bastard-decades, and it’s just not good enough.

Back to subject. This is the track I have in mind. 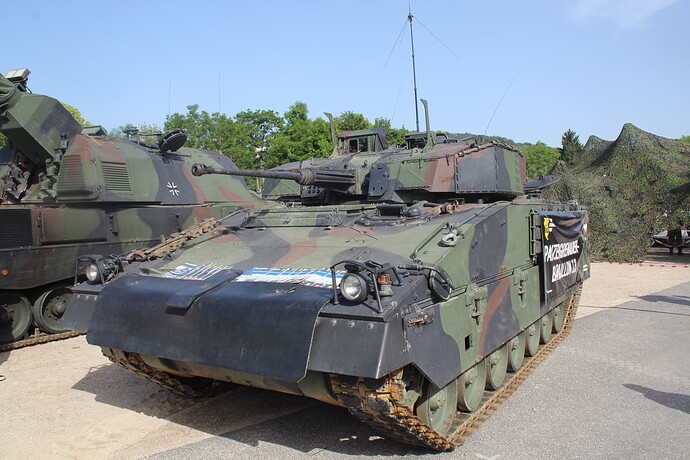 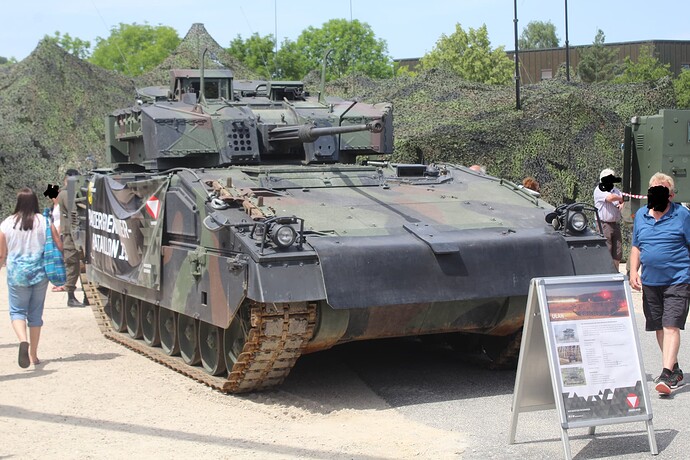 This would look great on the display tables; looking forward to hearing what you get back from Nimix.

Looks good … not really up to spec with it though … is this In German service ? and does it differ much from the Spanish one ?

It´s from the Austrian Bundesheer. Can´t tell whats the differences are in detail, but I guess it need some mods to build the Austrian one. Some background information on the ASCOD project on Wikipedia.
https://en.wikipedia.org/wiki/ASCOD

So yours are still mostly Puma now and some Marder ?

Thanks for the link as well

Exactly. currently, half of the Panzergrenadier unitd have Puma and the other half Marder 1 A3/A5. It´s planned to equip the rest of the units with Puma a.s.a.p.