Hey, hey. After reading various truck threads in these forums I decided to order a couple Soviet World War II transport vehicles and ended up with:

Various build up articles exist for both vehicles and Vallejo sells a paint set with the requisite camouflage colors so I can make a good start of both kits. Unfortunately, I have very few books on Soviet World War II vehicles which leaves me with some questions.

About 12 years ago, during a trip to the now defunct Charles Littlefield Tank Museum, I was surprised to see the chassis components of his Sd. Kfz. 222 armored car painted black. Since then, I never take stuff like that for granted.

Thanks for any advice or guidance you can provide!

I found a GAZ-AA walkaround if that helps:

Did the Soviets paint their tracks and if so, what color?

I can’t say yes or no for the Soviets, but I will say this. US tracks, when brand new from the factory are covered with a black tar like coating over the exterior metal surfaces. As soon as that track is on a vehicle and it starts moving, that coating is abraded away fairly rapidly, first by all the contact with running gear surfaces such as the sprockets, road wheels, and idler wheels, and also by whatever ground surfaces the track is in contact with. Within a short time of movement of any off paved roadway, all the metal surfaces are worn bare of the coating.
So unless your planning to depict a brand new factory delivery tank leaving the factory, or some display tank, the color of the tracks being painted will not come into play.

I think they painted the chassis parts black, or coated them with tar … 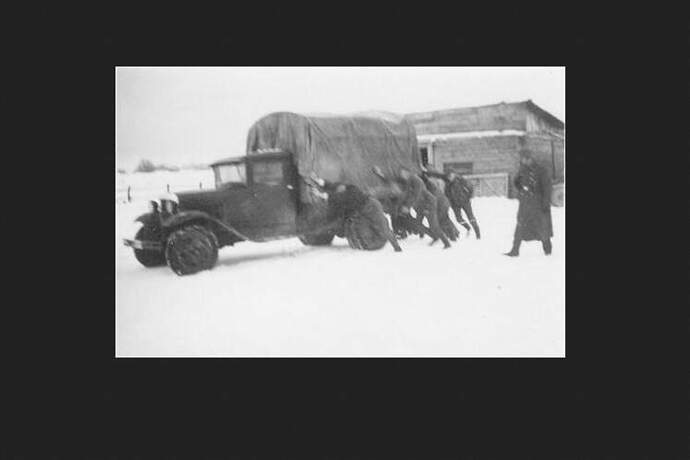 Some more reference photos Zis-5 but many more.

Thank you for that information, Stikpusher. Although I have built a number of M4 tanks, I did not know the metal parts of the tracks were painted black at the factory.

Finally, thank you once again for the assist, Robin_Nilsson. Having now found a fair number of pictures of Soviet trucks in museums or private ownership, it appears you are correct and everything below the waterline (frame and suspension elements) was painted black! I am even seeing black rims, running boards, and details, such as around headlights.

This site has a whole bunch of World War II era Soviet trucks on display:

All the trucks in the museum feature black frame, detail, and suspension elements. It appears most of the trucks evolved from Ford ancestors, so this makes a lot of sense. “You can have any color you want as long as it’s black.” Engine compartment parts come in a lot more colors so getting that right will take some more research.

These newer Miniart kits really impress me. They have a reputation for high difficulty but I am looking forward to the challenge.

Edit: The Wikipedia article for GAZ-AAA trucks contains links in the reference section to a number of walkarounds for these vehicles. The second link contains one really good shot of the engine compartment.

If you are going to make a late model (more Soviet, WWII period), then you can use this photo review, if earlier (more Ford, pre-war), then this. This is all suitable for a tractor.
The tracks and the wheels themselves were not specially painted, except for options for parades. 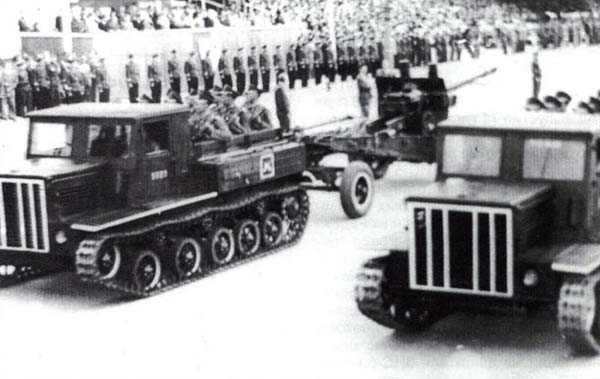 And then not always 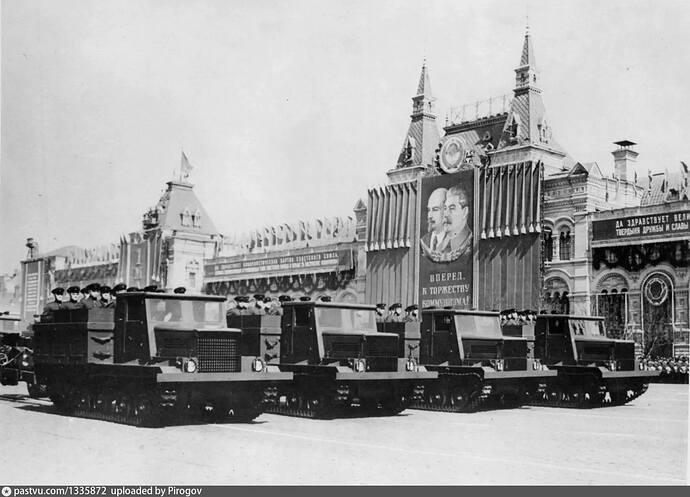 Thank you very much for those photos and the walkaround, Salekhard! The white engine in that museum vehicle certainly stands out.

Last night, I read a review of the YA-12 (Early) in which the writer claimed that Soviet vehicles in late 1943 did not receive black paint on the frame and chassis. The plot thickens.

The silver engine on trucks is a classic of the Soviet automotive industry. Aluminum powder mixed in heat-resistant varnish. I worked as an auto mechanic in the 1990s and am very familiar with this technology.

It may well be. The production of the I-12 began in August 1943 - this was the Battle of Kursk and the turning point of the war. 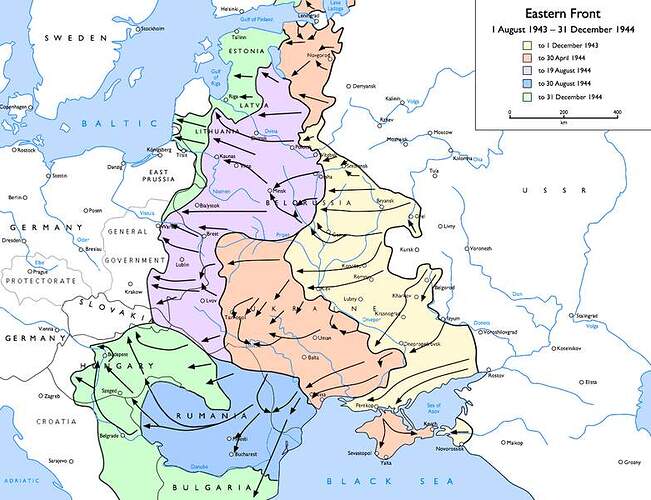 In any case - an artillery tractor, this is one of the dirtiest military vehicles, so the color of the frame will not be visible.
I’ll ask on the Russian forum.

Thank you for the additional information and research, Salekhard. Based on what I have read, engines for the early Ya-12 vehicles were American made and may have remained in the original factory paint color. As for mud, since I have not found a particular vehicle to model and know extremely little about the subject, mine will probably end up looking rather clean, plain, and uninteresting.

Thank you for the link, JS1961! I did visit that site and subsequently purchased all three appropriate camouflage colors from the Vallejo paint line. Hopefully, those colors are at least approximately correct.

Edit: According to one source, the General Motors Detroit Diesel 4-71 engines for early Ya-12 tractors were built up from kits supplied by the United States.

Not walk arounds , but still some great pictures that might help

Yes, that’s how it is. When I built my model, 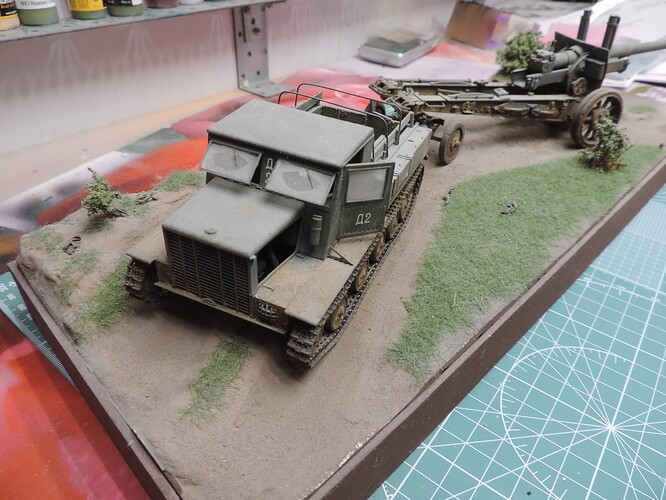 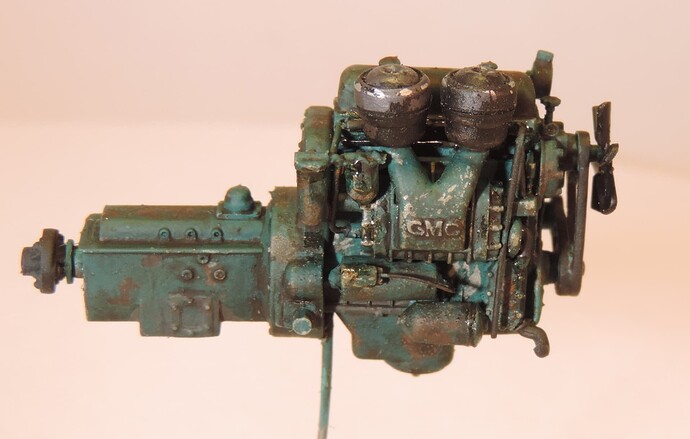 Your engine and model look great, Salekhard. I think you have the right of it, using green for pretty much everything. Even though I want to use black for the frame and white for the engine block to create some contrast, I cannot justify doing it on a vehicle manufactured in 1943.

My clear coats and decal stuff arrive in two days. After I finish off a few models approaching the finish line, I will launch into the Ya-12. Hopefully, mine turns out halfway as good as the one above.

I’m wondering about trucks in use in civilian industries in the Soviet Union, for example, the railroads. I wonder if these would just come in black? Anyone have any idea about this?

Specify what brand of truck you are talking about. If the frames of the trucks were always black and the engines were always silver, then the rest of the elements could have different colors. Each manufacturer had their favorite colors. And it did not depend on where it was planned to use the truck (if not the military and not for special purposes).
For a general understanding, see the topic “What colors were used to paint truck cabs in the USSR”

That’s an excellent article, thanks! I’m interested in Gaz pre-war. It sounds like dark green was their default.

Then everything is simple. They were all green. Unless you want to make a car out of a 1933 extreme run through the Karakum Desert 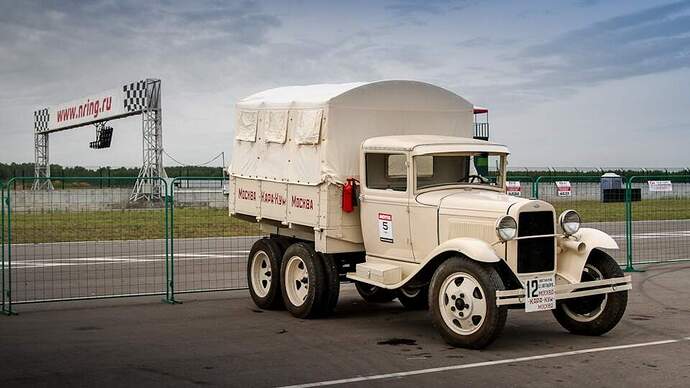 Hey, Salekhard. To your knowledge, were the paint colors listed in the instructions for the Miniart Ya-12 (Late) you built all correct? Do you recall any problems with the kit I should look out for?