I think I learned why that old Revell B-24 kit had so many issues. This kit has similar problems but not as bad that and I figured out you need to straighten parts BEFORE you assemble them. I dry tested it in this kit, I straightened the wing halves and they go together much better than trying to straighten them out after assembly and you don’t split the glue seams open. This was a sealed kit and I just opened it. I was surprised and shocked that it was white plastic and the sprues had been butchered to make it fit the box. They took the wing halves and folded the sprues to bring the wing halve together almost assembled! Also there was a large twisted sprue with nothing on it that resembled an octogonal pretzel. Everything was in the box, a lot was all over the bottom. It seems nice for an old kit but I don’t understand the crappy instructions, non existant parts numbers on the sprues or parts, and why the horrid pink decals! Anyways I started painting the interior Polly S acrylic British Interior Gray Green. John 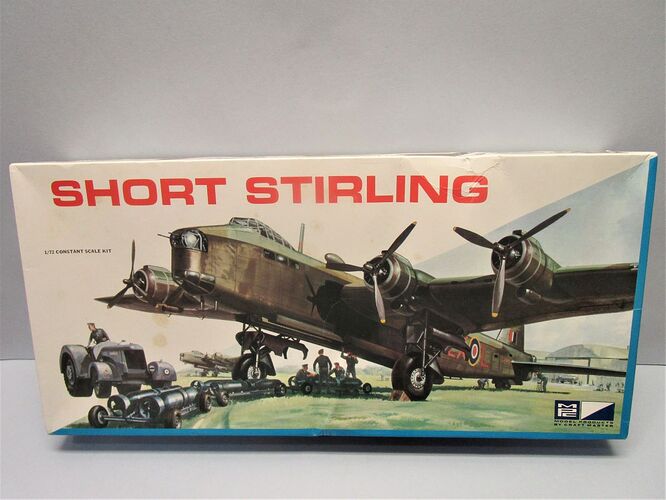 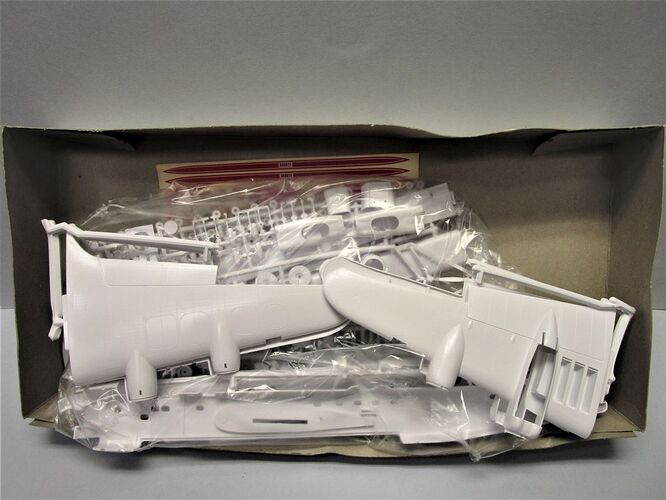 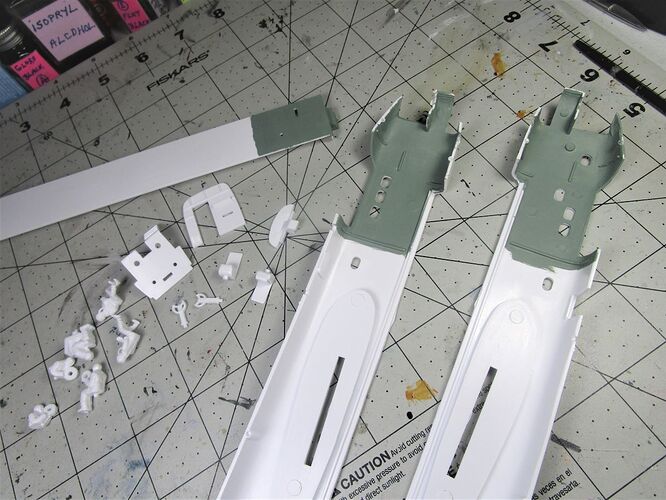 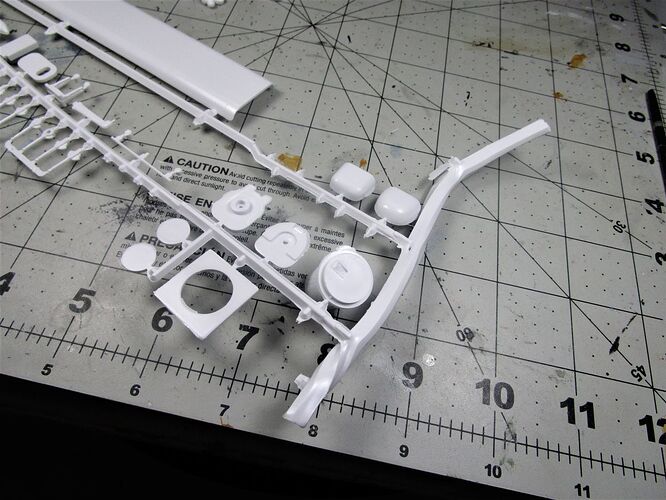 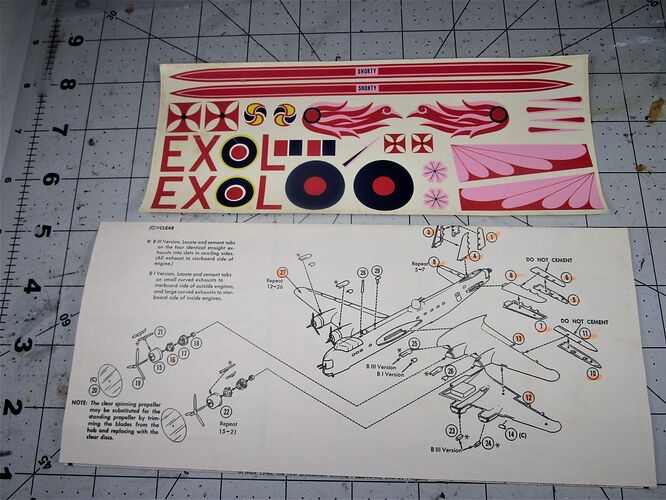 This is actually the 1966 Airfix kit reboxed by MPC in 1969. Numbering the parts on the sprue was rarely done back then. Sometimes there was an outline of the sprue in the instructions with a number next to it - if you got anything - but usually the parts were so basic, that looking at the instructions was supposed to be enough to show you what part to look for. Good fit was also an optional extra not found in these kits…

Wow, I remember the original Airfix kit and the plastic was black. So odd seeing it in white, not that it makes any difference really. Looking forward to following your progress John…

Thanks, nothing at all on the instructions showing a “sprue chart layout”. If this kit was circa 1969, I do remember something called Woodstock when I was 16 years old that year so are these decals related to the Love, Peace and Happiness era! LMAO!!! As far as the parts looking like the image on the instructions good luck, my instructions are minutia and blurry at best. I down loaded Airfix’s latest instructions from Scalemates and they are 100% better, much larger and very clear compared to the kit ones. I am using clamps and straightening as best I can before I commit to glue. See image below. John 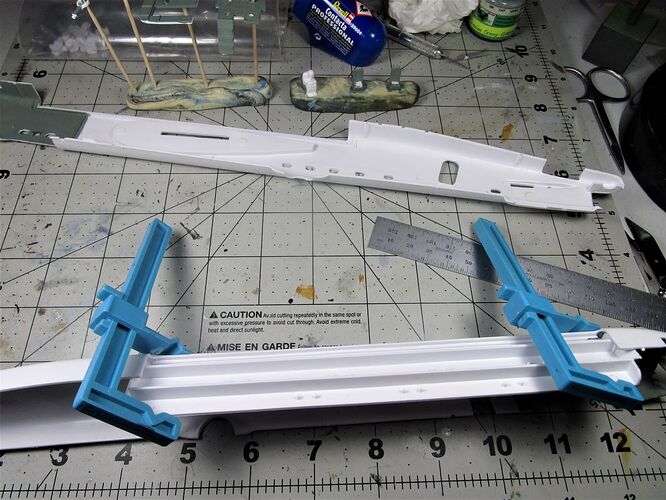 so are these decals related to the Love, Peace and Happiness era!

Now that is priceless!

I have the cockpit started but my tan paint crapped out, it jelled up and turned to a rubbery substance, Humbrol tin. So the crew will have to wait for their tan flight suits, besides I need to touch up those control yokes. John 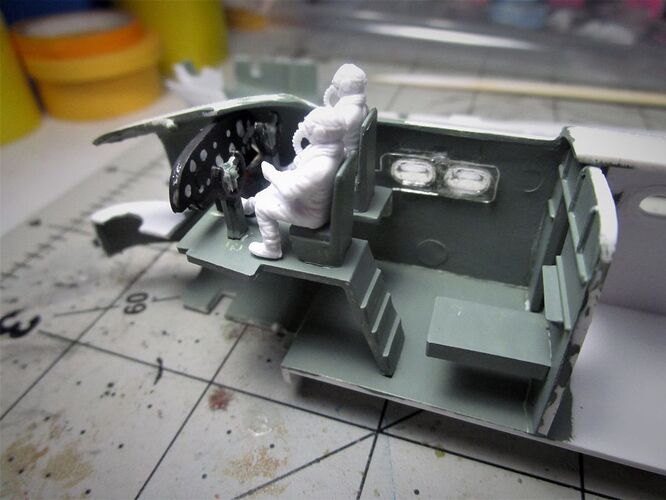 I found some images showing bomber crews with RAF blueish gray looking flight suits. I searched my paint box and found a bottle of blue gray I had mixed a few years back for a Lancaster build. Looks the part now, more crew yet to paint. John 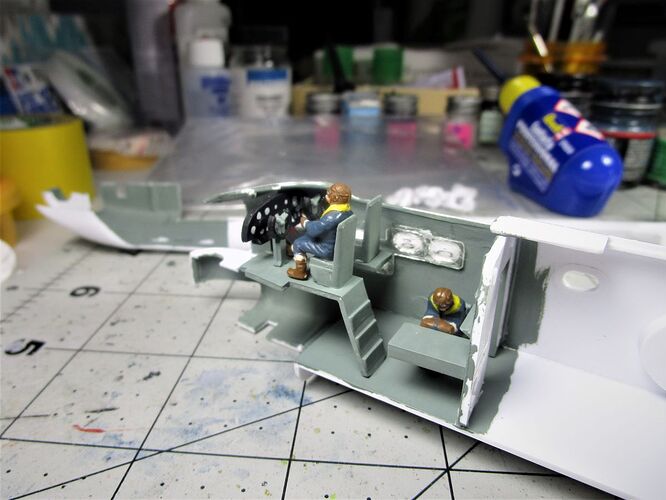 Basic uniform was blue. It was the Sheepskin jacket and trousers that were brown. This photo is of reenactors, but the uniform mix is accurate: 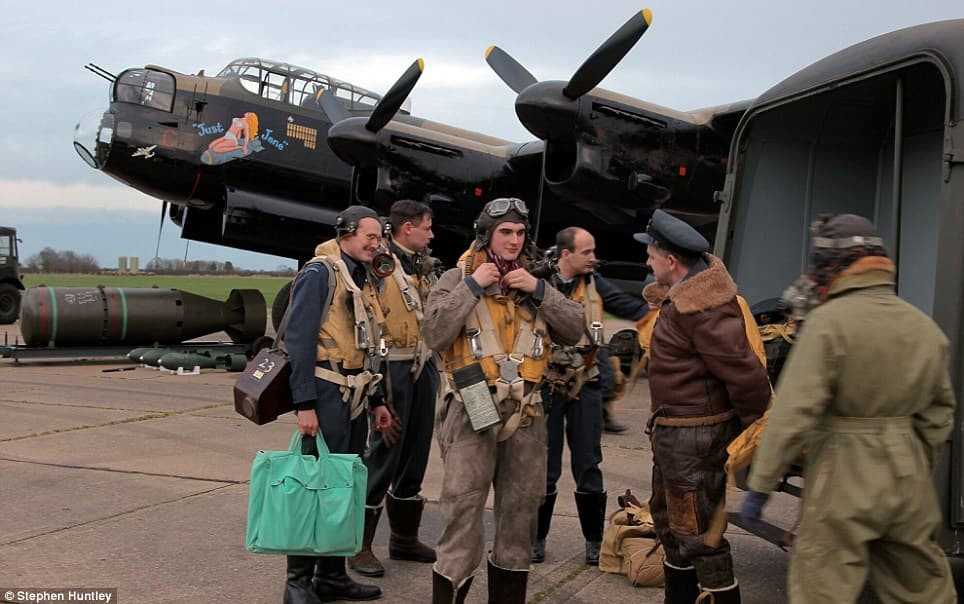 Thanks, I also found this Lanc crew. John 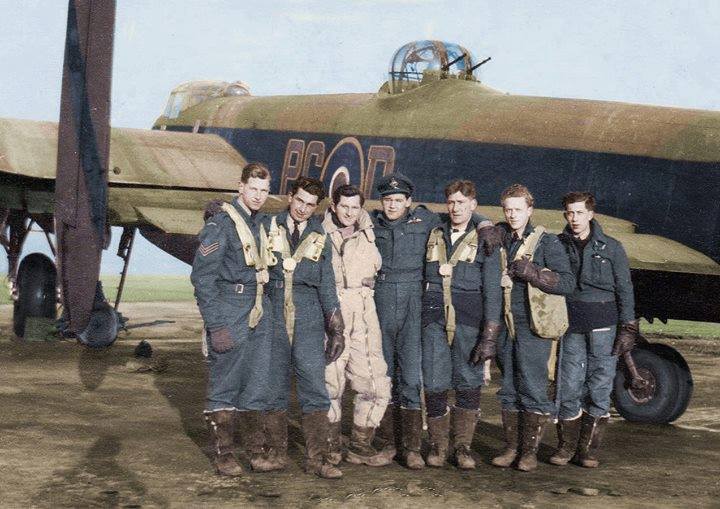 I have the two fuselage halves together and taped as a test fit. I had to do some filing and trimming on the bulkhead by the navigator. I also had some pushing and pulling getting the rear half aligned but I straightened it before I tried this. It looks doable now, don’t even want the headaches I had with Revell’s Liberator. John 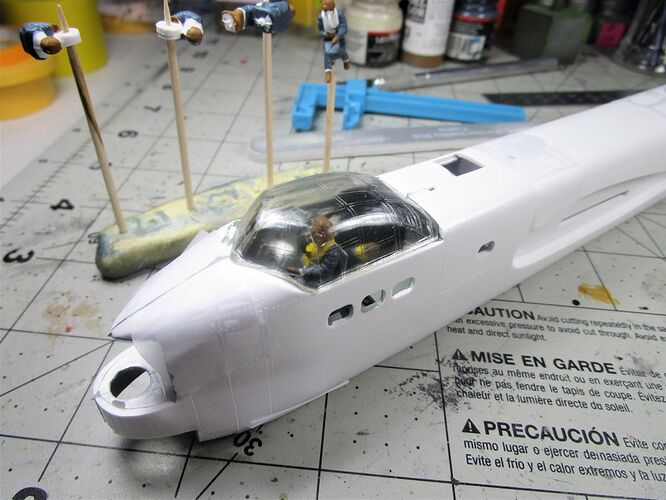 The bottom seam. Back to painting and adding windows and turrets. John 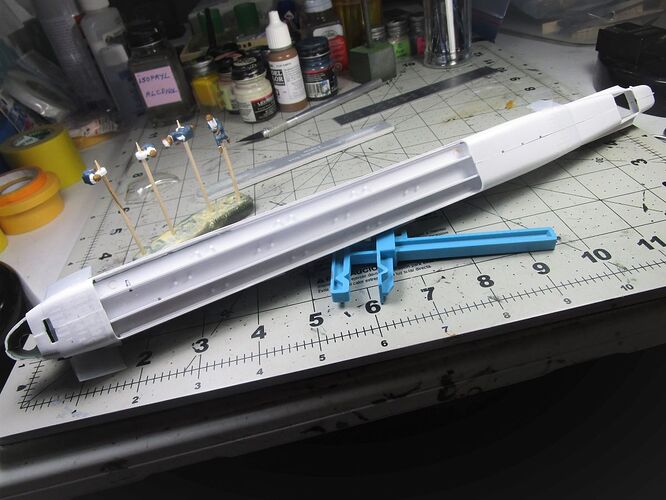 Looks good so far, hope it works out.

Always wanted to have a go at one of these, but the age of the moulds always put me off. My dad built it when it first came out.

Does this boxing include the tractor and bomb trolleys that came with the original Airfix issue?

Thanks.Yes, I bagged and saved the tractor and carts for future use. Only 1 more Airfix I want, the 1/72 800 series kit of the Lancaster B.I Grand Slam. I had it once and never finished, long gone but hard to find now. John

I built the front turret, another pilot figure and the fuselage windows. It’s not a hard kit to build you just have to double check what goes where which is trying with no parts numbers and going back and forth between the instructions on my computer and the ones that came with the kit which are pretty much worthless. I am pretty much use to it as I have built a few Airfix Lancasters and 2 Matchbox ones to boot! John 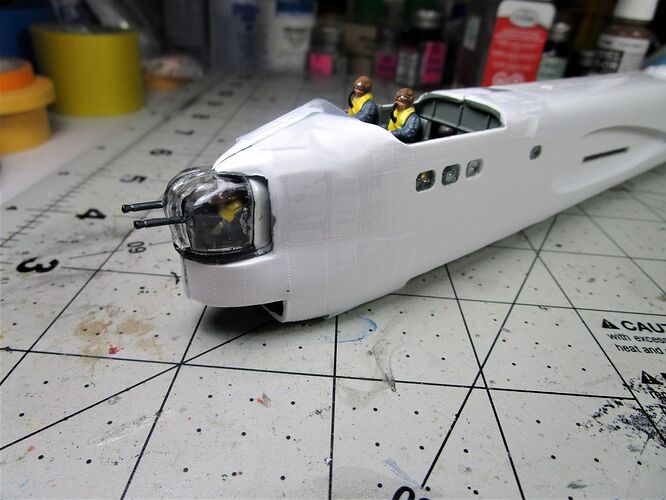 Some nostalgia. My Grand Slam kit that never got finished and my favorite Airfix Lancaster, Admiral Prune. The Grand Slam needed a lot of “body work” as can be seen in the nose section. John 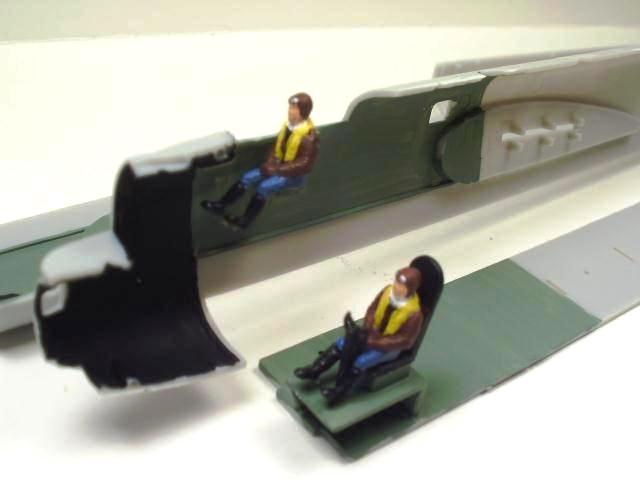 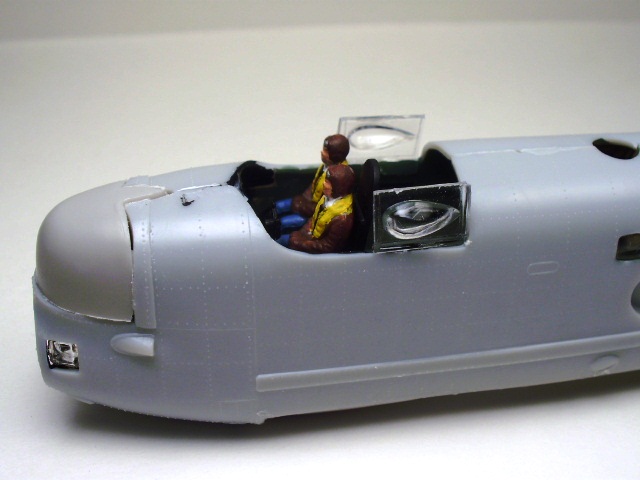 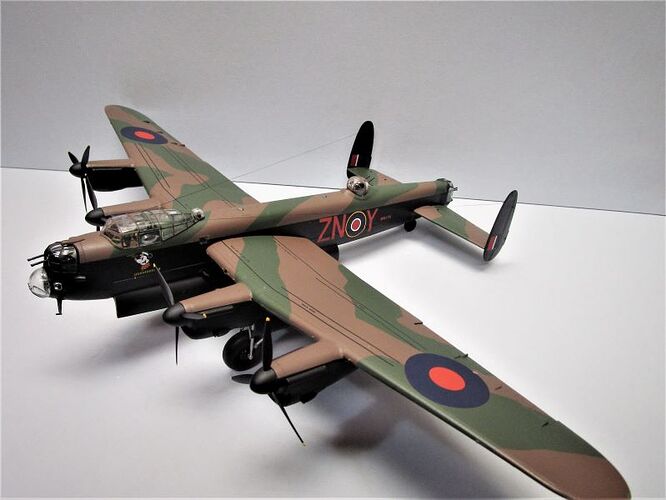 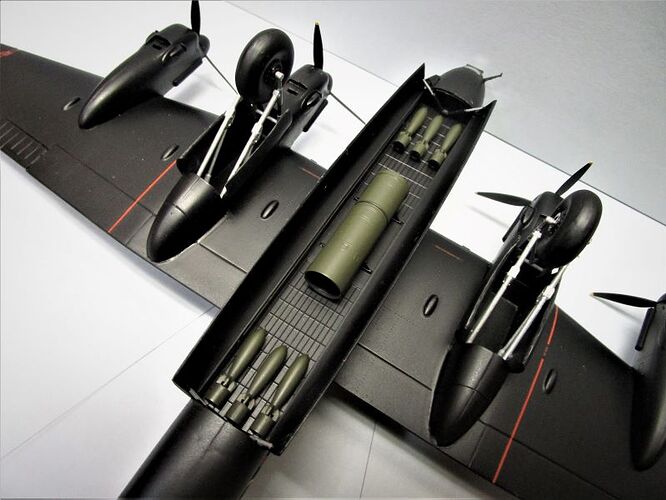 I think the worse part of these old kits is the clear parts. The plastic is brittle and not very clear. I have learned to be very careful as replacement parts for 1960s Airfix, or any 1960’s kits are rare to non existent. John 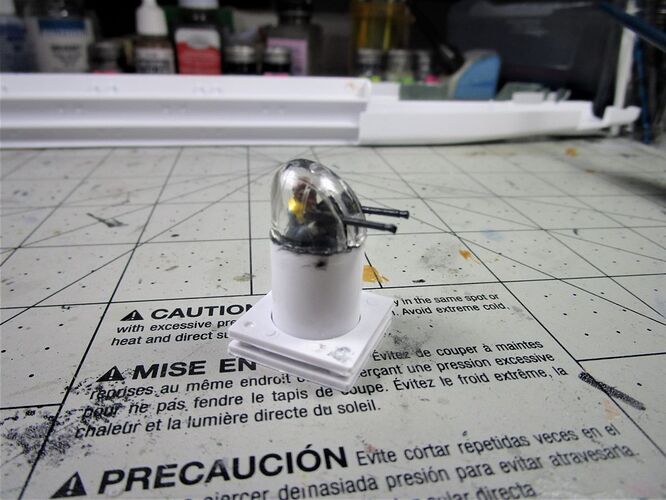 Airfix themselves offer a replacement part service. You need a single part or a few parts, ask them. spares@airfix.com

I have seen a video showing off their spare parts warehouse. You will be surprised how old and what they still have parts for. They still have sprues from their earliest kits.

For better, clearer glazing, you could also seek out Vacform parts too. I hear this brand is pretty good and they give you multiple aircraft types in the one box:
https://www.falconmodels.co.nz/clearvax/set17.html 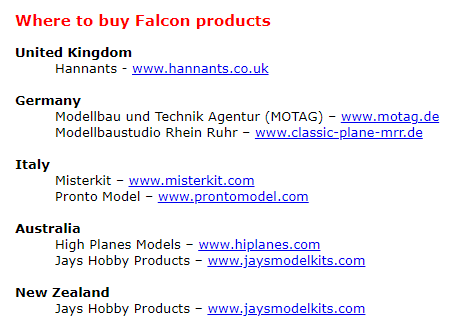 There are others as well.
https://www.iscopfifr.com/index.php?main_page=product_info&products_id=421648

Thanks, I never realized Airfix had that option for spare parts! I started the rear turret. It is not a very good fit. The guns seem to wide for the glass so I am filing the slots in the glass to widen them. I WILL finish this but will not build another until someone comes up with a new mold. I have seen and am not interested in Italeri’s. John 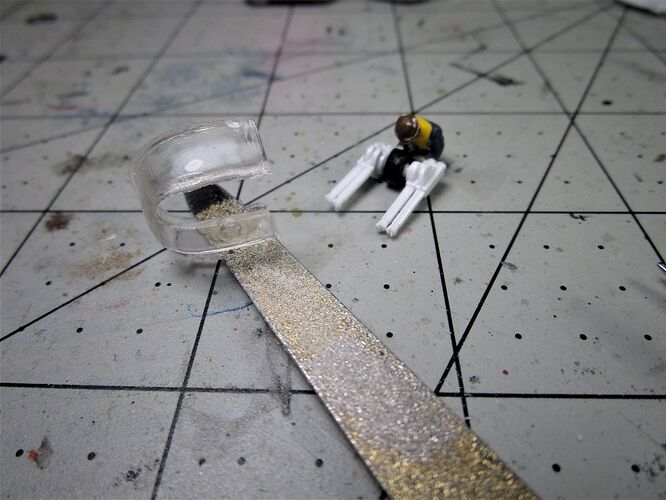 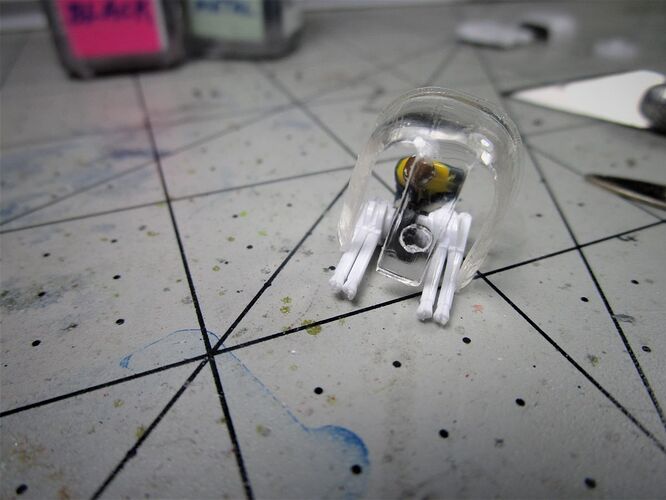 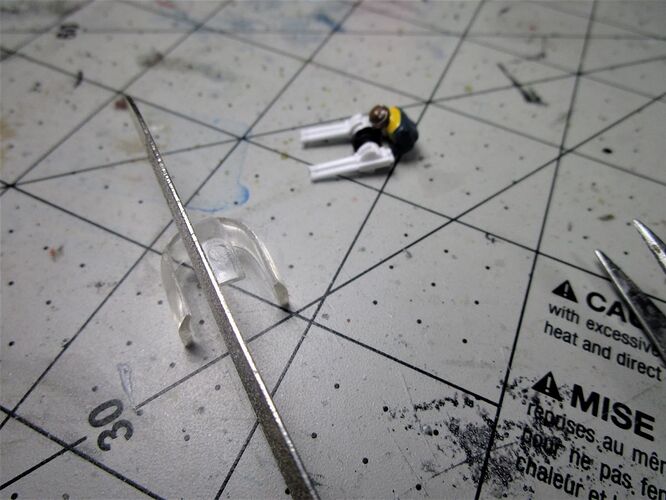 Finished with it. It almost ended up in the bin several times but I refuse to let it beat me, I like the subject and want one on my shelf, not the shelf of doom either. John 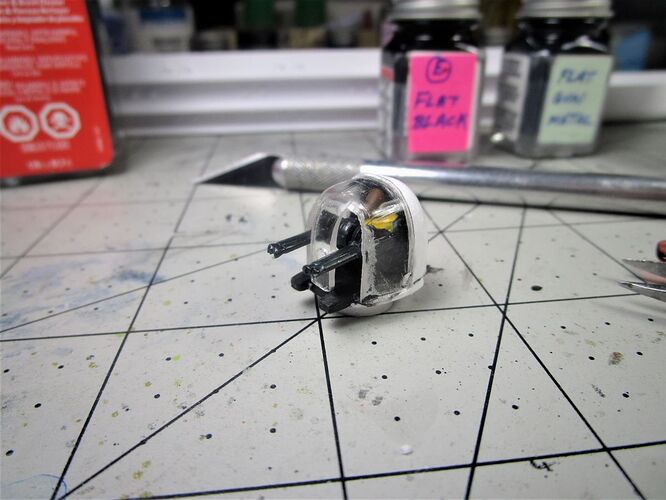