Might be made as a kit in the future… 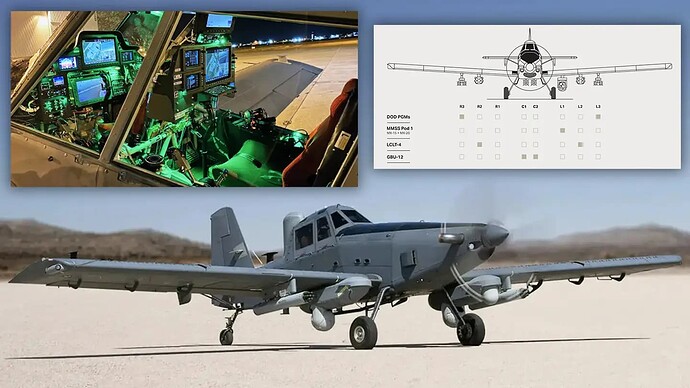 Take a look at how amazingly complex and awesome that instrument panel is!

I wonder if the capture of the Afghan National Air Force’s A-29 Super Tucanos had something to do with influencing the Sky Tractor decision in making USSOCOM not want a plane that has been captured and its technology perhaps disassembled and potentially analyzed by peer nations.

Nonetheless, great decision and about time for USSOCOM in the “Armed Overwatch” plane competition to provide its own Close Air Support for Special Operations Forces besides rotorcraft and AC-130s.

Ooo me likey! Kinda looks like a modern IL-2

Have I seen a similar crop duster type of shape ?

Blockquote Have I seen a similar crop duster type of shape ?

Exactly what it’s based upon!

Cheers Matt, I just read the link as well , which I didnt first time lol … that would of cleared it up

Not likely. All the aircraft left behind, including the Afghan Tucano’s, were disabled and made not usable by the Taliban. The exception is the one Black Hawk that was flown around a couple times before they crash-landed it and broke it.

It was chosen since it is the best option that they tested. My good buddie was the test pilot for L3 Harris as they were developing it. It is a perfect pick for SOCOM’s requirements.

Why? Would you like to expand on your answer a bit?

First off it doesn’t have the load capacity of the Wart Hog . Two , it doesn’t have a big gatling gun for suppression. and three, I don’t think it would have the legs or the speed. Iagree with the manuvering would be good . Just not enough fire power especially with two people . They might as well use a Mohawk.

The A-29 was removed from consideration for the project. There was nothing cosmic or technoligically advanced on the A-29 or it’s systems.

The mission is armed over watch, not tank killer. It doesn’t need a big gatling gun to do it’s mission. It will carry plenty of weapons and have a robust ISR capability to perform it mission. It will do it with about a 6 hour loiter time and is built rugged enough to be maintained and operated at forward locations.

When I trained with Slovenian Special Forces back in 2010 we used their PC-9M Pilatus for CAS. Great loiter time, and working in tandem could rain fire on targets with very little turn around time. Too bad we couldn’t figure out a way to use an proven existing platform. No electronics wizardry? If you can put it on a crop duster you can pit it on a Pilatus.

I see these type of crop dusters around my neck of the wood quite often. They can haul a heavy load for their size but sure payout in performance. I suppose with enough juice if a brick (F-4) can fly so can this.

This Sky Warden Light Attack Plane is really impressive! It has two FLIR balls so that the pilot and gunner can see separate individual targets. It has cockpit and engine armor. It has GPS and advanced warning. It has multiple sensors and antennas. It has self-sealing fuel tanks. It has 11 ordnance stations.

Sure it is slow at 150 MPH, but it doesn’t need to go fast in austere permissible COIN environments. What it does need is perhaps Stinger SHORADS and AIM-9s integrated into the arsenal for self-defense against certain aerial threats.

in the wonderful world of dropping bombs in your back pocket; speed often kills the wrong folks. If you could literally come in there at 50mph, they’d feed you steak everyday! Same goes with a gun. Now the A10 is a true 200 ft performer, and that’s a lot better than most of the other airframes out there, but that ugly little crop duster will do thirty feet effortlessly. This guy can roll thru and do a head count as well as an ammo count without breaking sweat. If your on his side and two hundred yards out from his target; he suddenly becomes your best friend! I honestly thing this ugly duckling could come in slow low and slow as to tell the color of the other guy’s eyeballs

Here’s an airframe that can pick up a creek bottom and drop down into it. Then follow it to the next blue crossing without ever being seen. What I’d like to know is how well it works on the night shift
gary

t has cockpit and engine armor.

It’ll need a lot of it and it’ll need to be very effective.

I’m sorry, I just do not see the firepower coming off the little guy . Yeah he’s cute and manuverable ,just needs a little more punch! Yes , I’ld also like this in 1/35.

The key design is to show the host nation and the counter-insurgents that special forces are NOT in the area by having a plane that “blends in” better than most. This can be mistaken for a crop duster.

By the way, counter-insurgents are the good guys fighting against the insurgents.

First off, what is that. There is no such command. There is USCENTCOM - Central Command - Middle East and SW Asia; and USAFRICOM - Africa Command - Africa (minus Egypt).

The rest of your post is drivel. The reason is not so it blends in with anything. The reason it is a crop duster is because that is the type of aircraft that best fits the requirement of a slow moving, long loiter time, heavy lift aircraft that can carry lots of ordinance.

think of it this way; that ugly little plane will fill the bill of a Skyraider, but even better. Few fit this bill. I remember the first OV1 I saw, and my thoughts were just like some of you here. Ugly and useless. This plane will evolve into one of the best FAC airframes ever. If your on the ground he will become your best friend because he gets down into the mud. Kinda like hunting woodcock. You just can’t hit it cause it turns on a dime.

What I wonder about is it’s ability to land on unimproved airstrips. Looks the part, but can it?
gary