I was lookin for some soviet figures for early to mid Cold War 1950s to 70s and noticed that the uniforms seem to be the same as world war 2 soviet infrantrymen. Was there that much of a change with the uniforms ?

If you look at Soviet uniforms worn during the Hungarian Uprising in 1956 or the Prague Spring invasion in 1968, the uniform was nearly identical to late WWII. They wore the same uniform blouse & pants, helmets, and boots. Only the ammo pouches and individual weapons changed. You won’t see the padded jacket and pants uniforms though. In the 1970s newer, more current looking types of uniforms and headgear appeared. The stand up closed collar pull over gymnastroika blouse was phased out in favor of new uniform shirts that had an open collar allowing the VDV and Naval Infantry to show off their striped undershirts for those units. One factor in that items replacement was to do with NBC decontamination procedure reasons, the new blouse could be taken off without having to be pulled over the head. A new billed soft cap was introduced, but the pilotka sidecap and ushanka cold weather fur cap were still seen. The materials and colors may change, but the basic design of the items did not. 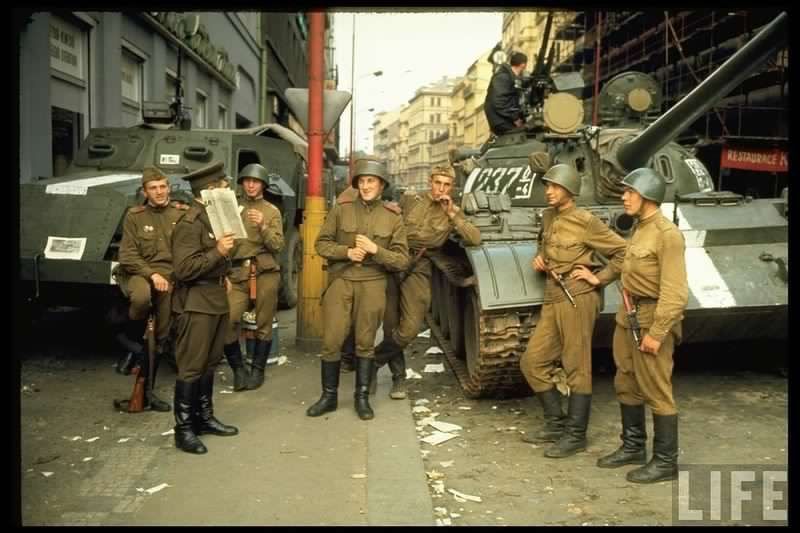 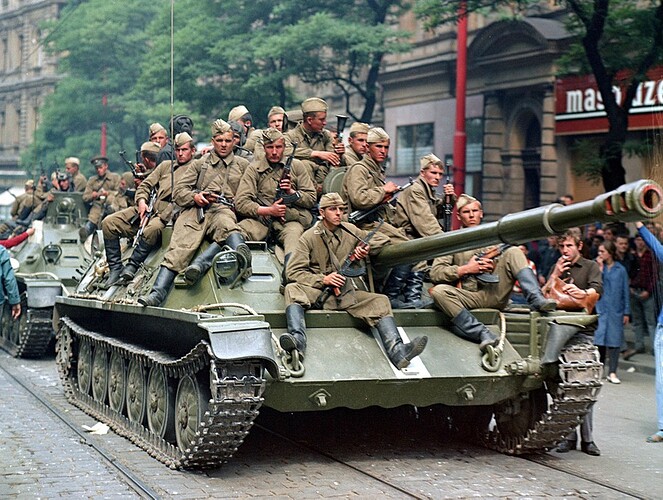 @Stikpusher thank you! I was looking at the box art of one of trumpeters T-62 that showed soldiers dismounting and it gave me a few ideas. I’m not sure what I’ll do or what poses I’ll use yet.
Now that i have the pictures you sent me i think there’s a few kits from 45 that i could use. How much different would the uniform color be from late war 45?

@Stikpusher what about webbing for the magazine pouches for the AK-47, where could i find these?

Are those Soviet paratroopers on the ASU -85? I think they wore a one piece suit … I could be wrong of course. Interestingly, I bought the trumpeter ASU- 57 ( or hobby boss ??) kit and on the box art they show what looks like Soviet paras but with red berets. I think they wore them for a while but switched back to the blue. I’m reading Steven Zalogas book “Inside the Blue Berets “ but just started it and so far doesn’t mention anything about uniforms specifically.

Here’s a summary of the relatively small changes in Red Army uniforms between 1945-1956: 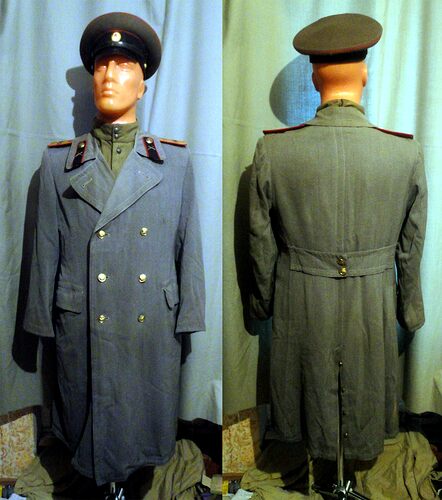 TANK has a series of 1/35 resin figures titled ‘Operation Danube, Prague 1968’. I think most of them can be used pretty much as they are for a scene from the Hungarian Revolution in 1956.

Gregory, the 50s to the 70s is quite a span in the development of Soviet uniforms and equipment. To my mind 1969 is key in that was when a new uniform was issued (as described elsewhere in this thread). Certainly up until that time you might have some success with utilising WW2 plastic figures, however, you will have no option but to scratch your own personal equipment I feel. obviously, any moulded PPSh magazine pouches will have to be sanded off. You’ll need to utilise some accessories from various manufacturers to add AK 47s (Italeri for one), bayonets and entrenching tools, and in some cases water-bottles; the curved AK 47 magazine pouches can be fairly easily made from Milliput, flattened out then cut adjusted by eye (from whatever reference pics you can identify). Add clasps etc as you see fit; blend to the model to allow for a good fit before letting it dry. You’ll need to add thin lead foil for weapon slings and in some cases - depending on the source figure - equipment straps and even belts.

Assuming you identify and convert a bayonet and entrenching tool, you’ve only really got to worry about the ammo pouches, waterbottle, and respirator. You might find a suitable waterbottle amongst the WW2 figures you’re after converting.

If it all sounds a faff - it is! But once you set out a sort of production line and you’ve wrestled the Milliput to user-consistency it’s not that taxing.

Lastly: Google is your friend here, have a good look around for “Soviet Personal Equipment” and similar key words. Also, Osprey do/did a good series of books on the later Soviet uniforms - including Warsaw Pact versions; all readily available somewhere I’m sure.

Oh yeah they do forgot about them

Rich, I am pretty sure that those are Soviet Paras on the ASU-85. The coveralls certainly indicate that, as opposed to the standard Soviet battledress of that time. Also it makes sense for an Airborne vehicle to be hauling the paras from the airport to objectives in the city.

Another source for obtaining field kit to convert WWII figures to 1956 or 1968 would be to get them from Dragon, Zvezda, or ICM figure sets. All of those companies have figure sets with gear that would work. You could take magazine pouches, bayonets, canteens, etc. from the figures, or use those items as masters to cast them in resin yourself. For personal use of course, not for sale. Then you’re not violating any copyright laws. AK’s could come from Dragon’s AK-47 Family weapons set. I believe that Trumpeter also makes some AK-47s as well for sale in 1/35 sets.

Yes I kinda figured that. It’s impossible to find any pics of Soviet Paras from that era at least in English as far as I’ve experienced.

@BootsDMS @Stikpusher thank you for this information. I was looking at pictures of soviet soldiers in the 60s and it looks like the few pics shown looks as if they don’t carry Ak-47 ammo pouches. I know at least in the Afghan war that the pouches were worn on the front of the soldiers but was that the same in the 50s and 60s. Or are the photos of Soviet soldiers in Prague without ammo pouches done intentionally, or were these pouches worn on the hip? 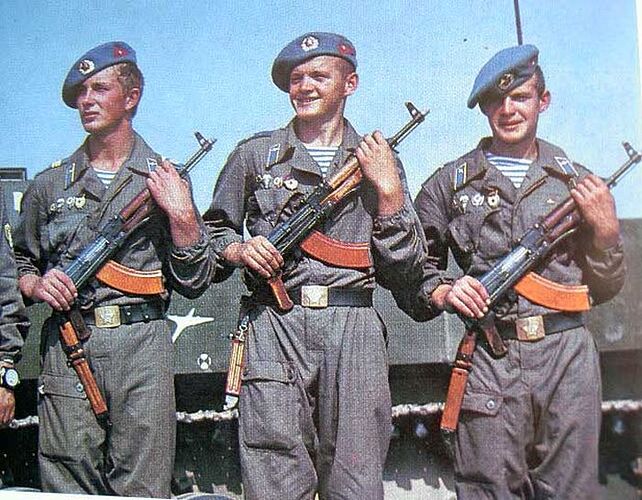 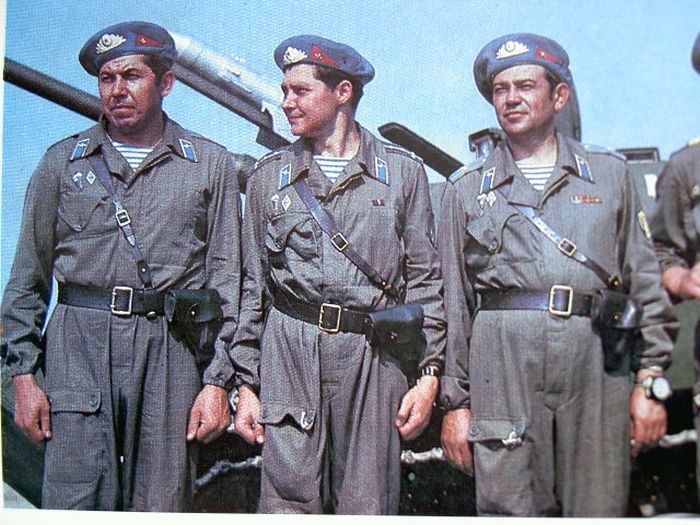 Well, at least 69/70 onwards which is when BMD came into service. Second picture, 1st from left would be NATO’s worst nightmare I should think; looks a bit of a bruiser!

Went on google and found this site
https://thesovietworld.com/1969-original-soviet-military-infantry-soldiers-uniform-m69-vintage-ussr-army-suite.html#PhotoSwipe1610035791943

Looked at the pouches for the AK-47 and it looks like they aren’t like the pouches they introduced in the 70s that were worn on their uniform as a kit. Almost looks as if it’s a watched attached to the hip.

I have a Soviet e-tool and carrier. There are belt loops on the back of the carrier. Probably the same for the magazine pouch and other items. It’s not like US ALICE, MOLLE, or the old stuff that had the wire hook that went thru the pistol belt grommets.

Are you talking about the chest rig magazine carrier? The one that is worn like an apron with the mags flush against the chest and it loops over and behind the wearers neck and closes in the lower rear somewhere?

@Stikpusher yes, i didn’t realize that it didn’t become used by the soviets until after the 60s. What i currently understand is that they used a bag attached to the hip to carry extra magazines. At work we still have guys using the FLC with the Molle pouches and some guys have the new TAP gear that can be interwoven onto their iotv.