Hi Guys,
I’m looking for any information about the Soviet naval infantry units that supposedly conducted parachute drops during ww2. I was researching this topic and came across a sentence that mentioned it but for the life of me I can’t find now. Thanks in advance!

Unfortunately, most (if not all) references make no distinction between airforce paratroopers, and naval infantry paratroopers.

Yeah I’ve look for hours it seems and as I mentioned earlier I came across a paragraph in some website that mentioned they made a few airdrops. Intriguing really. I’ll probably find it when I’m not actually looking lol. I did order the Osprey book about Soviet paras, it should be here in a week. Maybe that will have an answer.

If the Reds had Marines at that time, could that cause the confusion? Our Marines do have jump qual’d troopers for the Force Recon units. Had Marines and Air Force when I went through BAC at Benning in the late "60’s. And Marines are assigned to the naval forces. Just sayin’ …

Soviet Naval Infantry Paratroopers in WWII? That’s a new one to me. I know that they had several divisions of Red Army paratroopers, but most fought as regular ground troops for most of the war. From what I’ve read, the Soviets really didn’t have the transport force to pull off large scale airborne ops, and their last drop in 1943 was a disaster.

Yes that’s why I’ve reached out to this site because I’ve read quite a lot about them recently and most sites say the same things, but there was one site which mentioned them doing airdrops but I may read it too fast and not sure if they meant something else or what.
Then again there’s always the possibility that I simply misread the article. Thanks guys.

Yes I remember having about 7 Marines in jump school as well back in April ‘88. It was a vacation for them practically lol. I think they were Force Recon.
Interestingly, the Soviet Navy called them Naval infantry battalions and the Soviet army naval rifle battalions. I think they raised about 350,000 of them and they fought all over it seems; most prominently at Leningrad and the Crimea. I believe they also fought at Stalingrad.
For what it’s worth, the Italian navy had a swimmer-parachutist battalion formed in 1943. The Osprey book on Italian Navy and Airforce special units is excellent but VERY confusing!

There is a VERY brief reference here: “The Soviet experience in amphibious warfare in World War II contributed to the development of Soviet operational art in combined arms operations. Many members of the Naval Infantry were parachute trained; they conducted more drops and successful parachute operations than the [VDV]”(Russian Airborne Forces - Wikipedia).[ citation needed ] This was from Google search: “WWll soviet naval infantry paratroopers”
The reference implies a continuance into post-war developments, so the reference to “more drops and successful parachute operations” may be to post-war operations.

Ah yes I read that line too. It says more successful drops than the VDV. As we discussed earlier the VDV only had a handful of drops that were considered successful. Airlift was a constant problem. Interestingly as I read about the Italians as well, they had the same problem with aircraft availability, among other things.

I wonder what they mean by post war, because i don’t think the Soviets/Russians have had a combat jump since WW2. The Modern Russian naval infantry does have a parachute battalion or brigade, not sure which. Hmm…… as I said very confusing. I’m currently reading Steven Zalogas book on Soviet Airborne. Very informative. I’m only a quarter of the way through it.

Soviet Airborne forces spearheaded all of their post war “interventions” such as Hungary in 1956, Czechoslovakia in 1968, and Afghanistan in 1979. I don’t think they did any combat parachute assaults, but instead did air landing airfield seizures. I also believe that they were involved in one or two ops in some of the Africa wars, such as Angola.

Yes I’m curious how it would go for them especially trying to drop their BMDs. They pioneered dropping armored vehicles by parachute but have yet to do it in a combat situation, whereas we had the Panama invasion to drop the Sheridans.

The BMDs are fascinating vehicles, festooned with brackets for mounting parachutes and the associated stowage frames. Apparently they even experimented with dropping the crew IN the vehicle seated in cosmonaut type contoured chairs.

Yes if I remember correctly they were successful in testing the dropping of their BMDs with crew members on board. I think that became standard procedure for them to be dropped with a commander and driver so they can get the vehicles ready for combat immediately after landing. I forgot the name of the general who pushed for it. I just read about it the other day.

Ok I found some info on this topic. It happens to be the very book I’m reading now by Steven Zaloga. Its on page 75; lol no wonder I’m only up to page 45!
It’s a definite yes to my initial question. The Soviet Navy Black Sea fleet formed a small parachute force and conducted a raid in the Caucasus near a German airbase at Maikop. They formed a second unit to jump at Novorossisk.

What I wonder is where they mounted those seats in or on a vehicle that seems to have barely enough room for it’s full complement of paratroopers as it is. This photo is from the Jan. Feb. ‘93 issue of Armor magazine 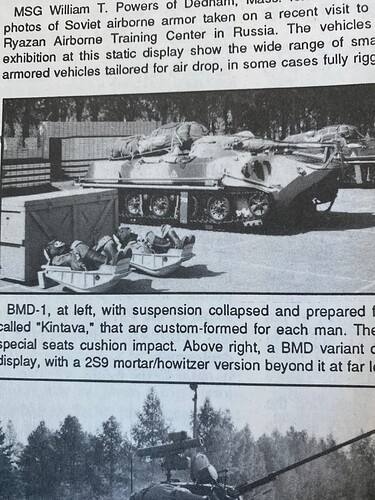 Sean I’m assuming somewhere in the rear compartment because you’re right those things were even more cramped than the BMP -1s.

They were stuffed into that wooden crate, right behind them!

Must been quite a ride lol

Good god. I would rather ride into space on a Soviet rocket than jump strapped into the back of a Soviet IFV…

There’s incentive to keep the rockets from exploding, but one pancaked track wouldn’t even get a twitch let alone a raise from one of Brezhnev’s massive eyebrows.