Anyone know if the 21st PzDiv fielded Stugs in Normandy??
I know they had a lot of modified French vehicles and 2 Bns of PzIVs in their PzRegt but did thy also have a Stub Abt?
TIA,
J

Rommel had been away from the front during the first days of the invasion on leave to visit his family; he re-assumed command on 9 June. The division was grouped with two panzer divisions, 12SS and Panzer Lehr, under the command of Sepp Dietrich which were to push northwest to retake Bayeux but this plan was abandoned when the divisional staff were killed in an air raid.

The division continued to fight as part of the front throughout June and July. Between 6 June and 8 July, 21st Panzer reported the loss of 54 Panzer IVs, with 17 Panzer IVs arriving as replacements. On 3 July a German report stated the following number of enemy tanks destroyed by 21st Panzer according to weapon used: Pz: 37, Sturmgeschütz: 15, Mot. Pak & Flak: 41, Artillery: 3, Infantry: 5. Total 101. To 27 July German tank losses continued in similar numbers "

Hope that helps a bit and both write ups made no mention to Mks or variant.

The 10 Sturmgeschütz III ausf G were from the attached Panzer-Kompanie 315 (funklenk) with 12 Borgward IV ausf A. The Stugs were used in combat against British and Canadian forces north of Caen.

The 10 Sturmgeschütz ausf G were from the attached Panzer-Kompanie 315 (funklenk) with 12 Borgward IV ausf A.

I would like a clarification: The company is not part of the organization of the 21st Panzer Division (as of June 1944). It is under the operational command of the division.
Kalin

Yes,thanks. I saw that when I beckoned to the Google overlords for info.
I am assuming they were StugIIIs at this stage.
J

According to Niklas Zetterling’s “Normandy 1944”, which examines German combat strength and efficiency in Normandy and includes exhaustive detail on the individual divisions committed, both infantry and panzer, 21 Pz Div did have a Sturmgeschutz Abteilung, Abt 200 with four kompanies, but each kompanie was equipped with four 7.5Cm Pak 40 on Hotchkiss chassis and six 10.5cm leFH 16 also on Hotchkiss chassis, not Stugs.

A couple of years ago, I was doing some research on SdKfz 251 SPW. Someone suggested I get the book “D-Day: Through German Eyes” by Ekhertz. It’s a pretty bloody and graphic book – very strange for supposed “memoirs” of soldiers. Then, one section is about a StuG III unit – which happens to be StuG Abt 200 of 21PD. But then I remembered 21PD and StAbt 200 did not have any actual Sturmgeschütze III in their inventory.

The more I read, the more and more technical things were clearly wrong – and not the occasional items that might be excused for poor memory. Then I looked into the provenance of the book (and its follow-on volume). They were published by the same company that did the salacious Tiger and Panther books by “Wolfgang Faust”. All were fiction.

They were published by the same company that did the salacious Tiger and Panther books by “Wolfgang Faust”. All were fiction.

I guess this reviewer would agree with you…

As usual in the research phase, I am getting more confused as I compile more data!
The purpose of this thread is to find out if the 21Pz had Stugs because my next scene involves the counter attack launched from around Mercelet and was supposed to comprise Inf. from the 26 PzGrenRegt supported by " a few assault guns" tasked from the 21PzDiv.
I assumed they would be Stugs but now…who knows??
J

I hear ya Jerry. I’m sure your reference library is bigger and better than mine but I’ll check my references and see what I can find. The internet is iffy to say the least

Info about the Marcelet attack is as rare as hens’ teeth I would say.
J

I found this map in The Panzers and the Battle of Normandy; 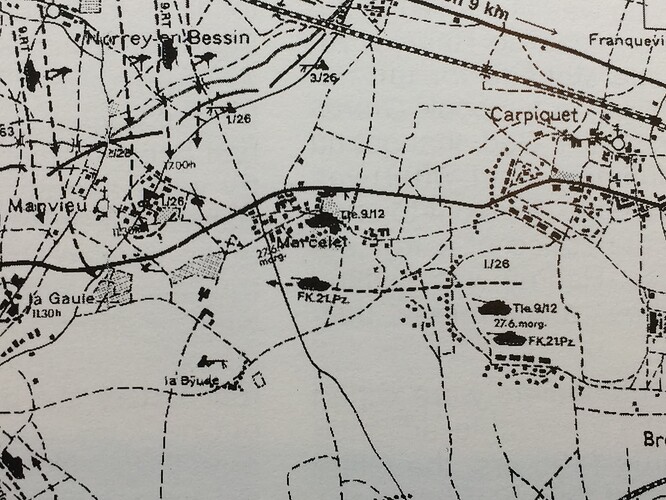 Note the map symbol of what could arguably be called a Sturmgeschutz, (although I’m not saying it is!), with the designation “FK.21.Pz.”, just below the town of Marcelet. Could this “FK” be the abbreviation for Funklenk? If so, there are your Sturmgeschutzen. So far, I have not been able to find any supporting text referring to this unit. I also see a date of “27.6. morg.” (German; morgen “morning”?), just below and left of the M of Marcelet. Is this the correct date and time?

Yes,appev. for Funklenk and also the date is correct. Hard to say though if this attack was planned or if it was actually executed. The 15th Div does state an enormous amount of arty ammo fired during this incident, which is why it never amounted to anything. The goal was to regain the town of St Manvieu and rescue elements of the I/26PzGrenRegt of HJ. This looks like one of the maps in Hubert Meyers’ book.
J

There isn’t any mention in this book about offensive actions taken by the “assault guns” of the 21st Pz. at this time frame, only briefly mentioning defensive positions near Haut du Bosq on the 26th of June and apparently what is shown on the above map on the 27th. I’m going to switch to some other books for further research.
Osprey’s Caen 1944 isn’t of much help either. While discussing the counter-attacks of the 21st Panzer against St Manviev on the 26th, they only mention Pz. IVs in the attacks, stating both attacks were beaten back by “intense artillery fire.”

Even more curious is the anecdote by a runner from Krauses’ HQ who was sent with 2 officers to the rear to locate the 9Komp. of PzIVs from the HJ and request their support. The PzIV commander declined, stating the danger of operating his tanks inside the village. Possible th PzIVs were from the 21Panzer as they were used later during Epsom on the counterattack launched by the LAH along the Odon River west. But that was a few days later. I still am pretty sure any PzIVs had to be the 6/12SS PzRegt. But the mystery still remains concerning the “assault guns”.

Nothing at all in Panzers in Normandy, Then and Now… Well, that’s about all I’ve got… I have a few other books on Normandy, but I’m rapidly running out of references on this subject.

It is a little known episode apparently.
J