Here’s the venerable Skif kit - or rather 2 of them - hopefully brought up to a decent enough spec. You may well ask “Why?” when the Trumpeter offerings are superior in just about every way. Well, the answer is simple, I had them in my stash; I always had a soft spot for Skif as they were really first on the block with some of the more esoteric Soviet stuff back in around 1997 when I think they released their T-64A; in fact, as I’d just left the Regular Army by then I was at last able to catch up after a 2 decade period with the hobby, and the A version was the first kit I built.

I built these 2 more recently and was really trying to create an image of Soviet “mass” although arguably not successfully with only 2 vehicles! However, I am constrained by the size of base I use and could just about get 2 x models on this, an A3 sized base. I appreciate the spacing is an artifice.

I used the Eduard etch set, Trumpeter tracks, Karaya tow ropes, Accurate Armour gun barrel, and filched the MG from the ICM Soviet Afghan Soviet Special Forces set to make a better NSVT for the Commander. After all that truly, I might as well have used the Trumpeter versions! I am aware of the various limitations of the Skif versions.

The figures came from Dragon including the modified Traffic Regulator figure, which was my first foray into figure converting using an armature. All figures had Hornet Heads. All tarps, cam nets and Schnorkels were scratched.

Inspired by a You Tube video (“Soviet Army T-64 Tanks”) I added branches from etch and although not brilliant they achieve an effect I feel. 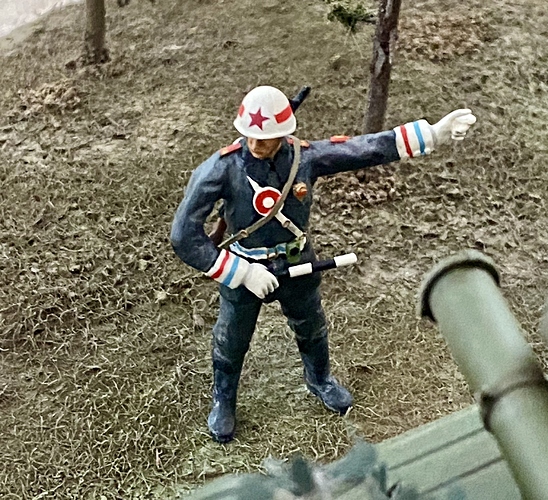 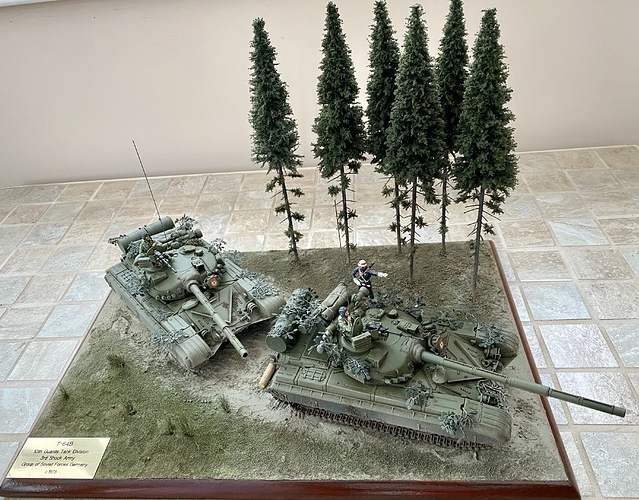 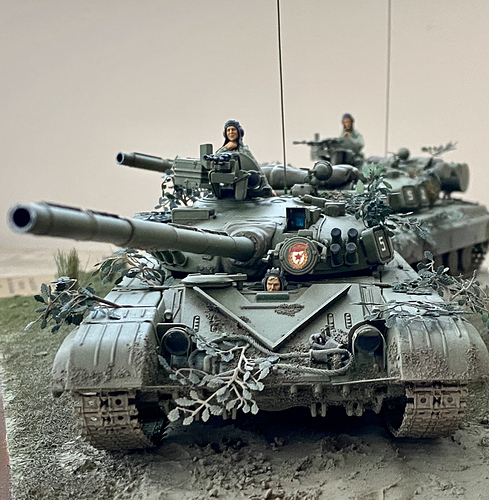 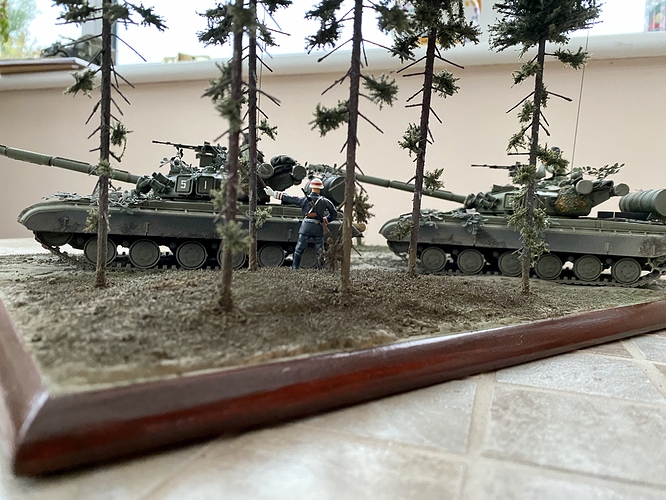 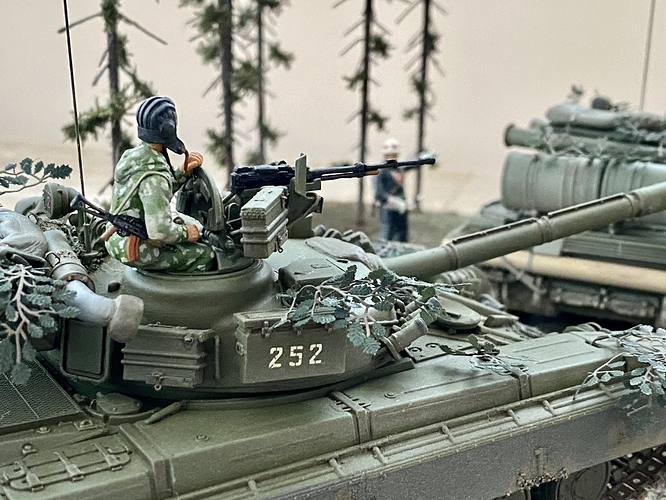 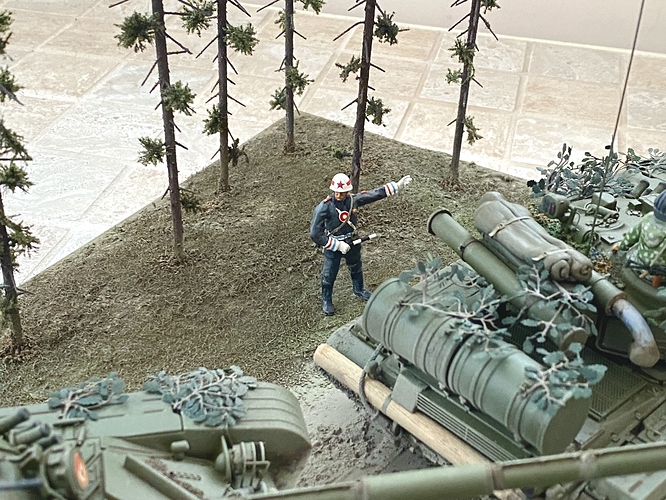 I really like that turning atcha’ perspective (image No. 3) and peeking at their broadsides through the woods (image No. 4). Very nice work!

Thanks - both Joe and Michael.

My son, who took the pictures, turned 2 of the images into black and white in an attempt to imitate those photos taken by the military missions who were, at the time stomping around East Germany ever ready to take a picture and steal stuff; whilst they’re not sort of grainy enough or obscured by dust they nearly add a certain atmosphere I think: 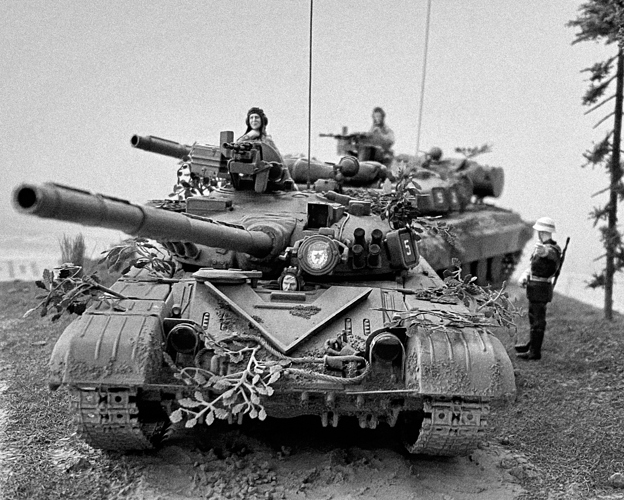 Anyway, that’s not really here or there (!); thanks again for the comments.

Only just seen this… Another great finish Brian, reminds me of the Training videos we use to watch to.
And oddly enough, it was the 3rd Shock Army who we would of faced in our deployment lines should the big one of happened. I’m glad that never happened lol.

Thanks John! My main aim in modelling is to replicate those equipments of the Cold War (both NATO and WP) but limited to the Central Region, which of course, you and I know so well; i started off by just concentrating on MBTs and APCs, and initially just covering my own span of service, but it all soon mutated into the Cold War writ large ie from 1945 to 80 - thus making a rod for my own back, and also no longer limited to the 2 categories above - more fool me!

The 3 Shock Army focus was all too real for me not least as for a large part of my career I was working alongside our Int Corps brethren and it was all very deadly indeed. My first posting was HQ 1st British Corps and I remember all too vividly the Int Section Photographer being scrambled by helicopter up to the Border as what (I think) turned out to be a T-64 was there - which also means that T-64 was deployed in GSFG a lot earlier than must sources have you believe.

Anyway, far too much woffle and memories; thanks again for the comments.

Thats what makes this place so interesting, some of the background waffle and memories. I did a weeks exchange down in the Fulda Gap with an M1 Regt, and I remember as we patrolled (low level Troop Exercise) one side, we were scoping a T64 or T72 the other side doing the same to us.

Damn… forgot to ask about the trees - scratch or kits ? they look good.

Wow, very nicely done with the Skif kits. I built a few of their kits when they came out, but unfortunately they didn’t survive a move.

Thanks Erik; I still have a few other Skif kits in my stash and will endeavour to get the best from them.

Sorry - missed the question; I spotted them at the Belgian nationals one year (I normally attend every year and thoroughly recommend it); they’re provided by a Polish firm called Model Scene - I tried to attach the URL but it doesn’t seem to work; anyway, a quick Google will identify it I’m sure. See under “Firs and Larches”). They were around 30 Euros which worked out at about a fiver each (a pack of 5). They do loads of stuff but I particularly wanted to try and replicate those dank and dark German forests we know so well.

I am slightly constrained by the size of container I use to transport my models to shows so I went for a suitable height as opposed to strict arboreal accuracy. I know there are countless tutorials amongst the modelling fraternity on how best to make trees but I’m afraid I went for the easy option.

'Hope this is of some use!

Very much so, thanks again Boots

Overall vey nice, but what I really like is the MP (?) directing traffic. That’s a great detail that adds a huge amount of interest.

That’s very gratifying! The figure is representative of either the Commandant’s Service or a traffic Regulator; both have a quasi MP role regarding traffic control in the then Soviet forces. I took inspiration (as mentioned above) from a small You Tube clip entitled “Soviet Army T-64 Tanks” which lasts for 3.28 minutes. If you identify it at 1.52 you’ll see a Traffic Regulator close up and again at 3.09 where you’ll see a column of T-64s, a Regulator and the tree line, all of which, distance -wise I’ve had to compress but you’ll see where I’m coming from I’m sure (if you’re inclined to have a look of course).

I actually took the uniform details and the stance from a Steven Zaloga book from the Osprey Elite series “Inside the Soviet Army Today” wherein lies a series of excellent illustrations from Ron Volstad. The figure was also my first attempt at modifying/conversion using a wire armature and it sort of came out how I wanted.

Anyway, thanks for taking the time to look and for the comments.

@BootsDMS Brian, the research and work paid dividends! The figure is a great addition, and one that I don’t think I’ve seen before on any other dio. It’s hard to find a detail with that much visual interest and color while remaining both accurate and plausible.

Michael, thanks again - it’s comments like this that makes the hobby so rewarding.

boots i think Putin would approve photo number 3and give a major thumbs up. very nicely done! A++