I’ve been working on my new build for more then a week now, and thought that it was time to start my build blog and 1st update.

I’ve long loved the Mercedes AMG GT3 car series that runs in just about every GT3 series world wide in some form or another.

The car started life as all race GT cars do as a regular production car for the street in 2014. 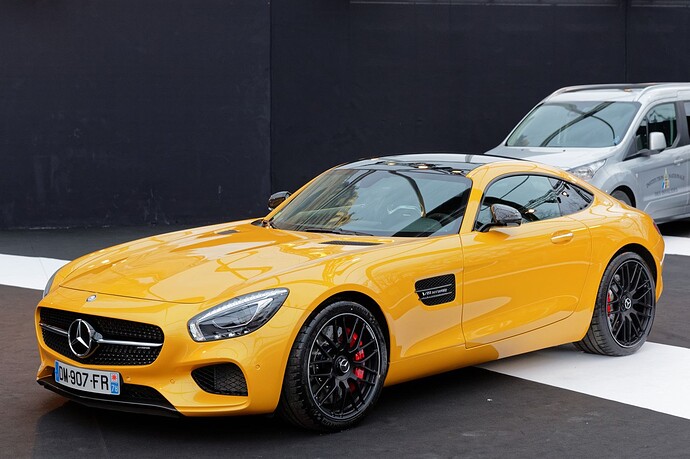 One such team that campaigned the big Merc was Haribu Racing with an all black car and striking decal scheme. 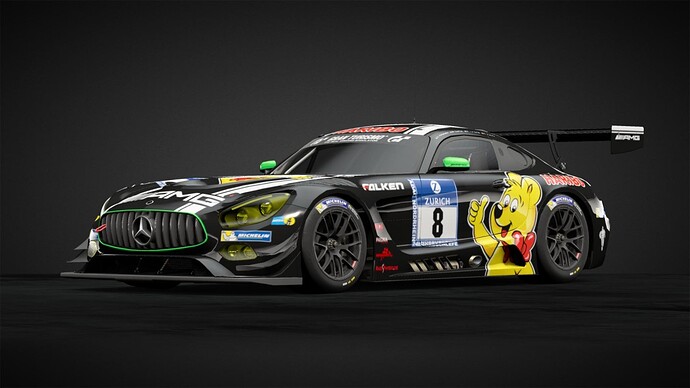 When I saw this car, I knew that I just had to build it. Tamiya produced the factory version Merc AMG GT3 car in kit form several years ago, which is the correct version of the car: 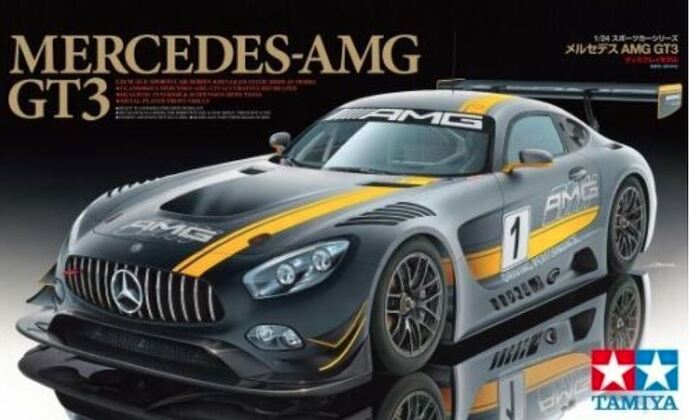 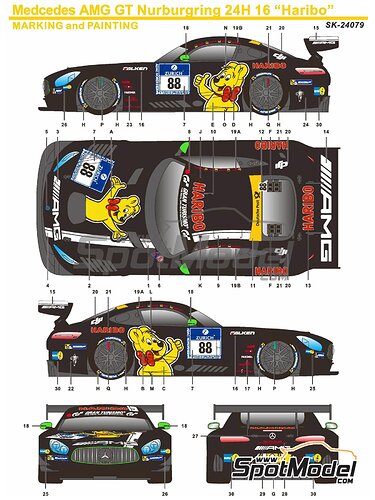 The kit is nicely detailed even with no engine/trans nor full suspension is included. The body, ducting, and a full interior are rather complex in construction, but every single piece fits perfectly. Here’s the body shell ready for priming. 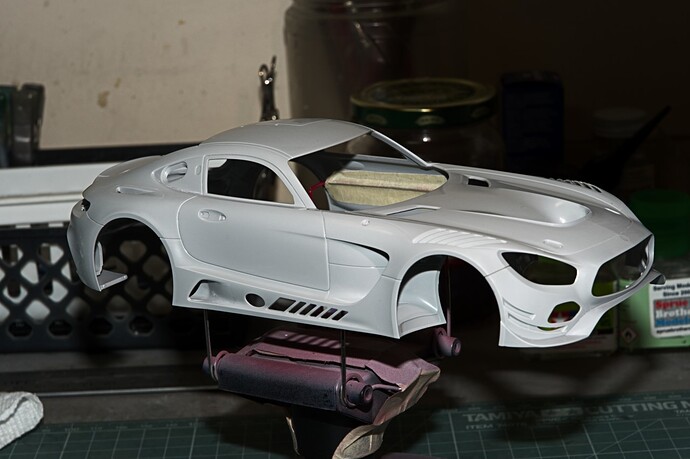 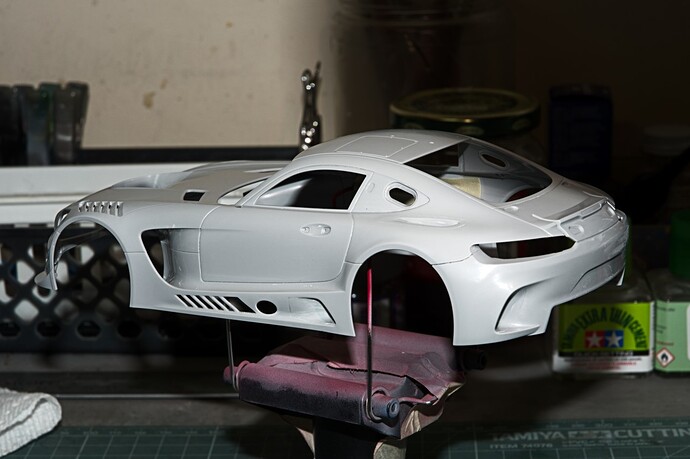 Tamiya 2016 haribro Mer AMG GT3 5 14 21280×853 129 KB
I primed the body with Mr. Finisher’s 1500 Black primer but some how forgot to take any pictures. Once dry I air brushed the Black using ScaleFinishes pre-thinned lacquer. Here’s the body shell prior to prep for decaling. 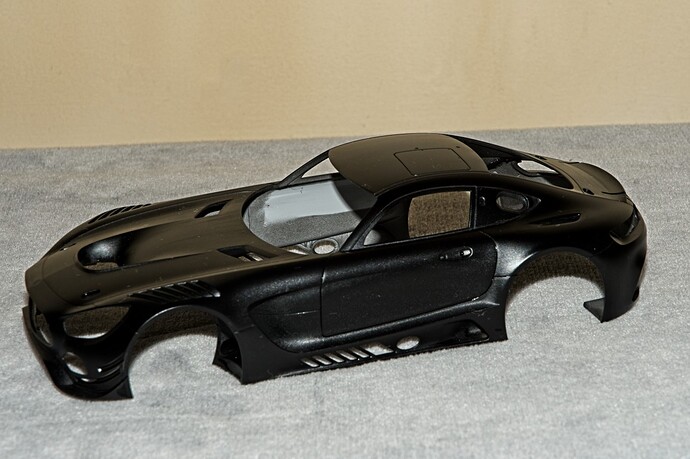 Tamiya 2016 haribro Mer AMG GT3 5 14 31280×853 183 KB
Decaling has started, and it’s been quite an adventure as working with the DK decals is nothing like working with any of the usual decal makers or kit decals I’ve used to date. Don’t take that the wrong way as the decals are fantastic.

Great start as always Joel, and from the reports and builds I’ve seen on this kit we are all in for a real treat (especially you my friend)!
You have picked a striking scheme as well, really looking forward to your progress reports on this one.

D,
Thanks so much for the thumbs up my friend. It’s always greatly appreciated.

To bad I can’t enter this build in the GB as it has the 3 Bears on it, but it’s the sponsor’s trademark, not the car’s.

The AMG GT is such a good looking car. A few weeks back, I was at a friends house, when one of his other friends came by, in a silver AMG GT, he had borrowed, from his father in law. Amazing design and amazing soundtrack.

The Haribo livery looks killer. Believe me I have eaten my share of their gummy bears

Looking forward to this one Joel as I have the Leon Cystos version. The Haribo bear will look great. I went to their museum in the south of France many years ago, free gummy bears!

Following this one Joel as I have the kit in the stash.
The decal scheme is going to look good with a black body colour.
Andy

Buckled up for the ride Joel

Jesper,
Thanks for stopping by, and I can assure you that at work I was a Gummy Bear Nut case on breaks
joel

Michael,
I’m planning on buying the Cystos version as well. It’s the 2018 configuration not the 2016. What’s been driving me nuts is that all the AM decal companies just list their decals for the Tamiya kit, but not which year. About the only differences I can see is the lower exhaust panels but I’m sure that there’s other differences as well.

Russelle,
As always it great to have you along for the ride, as I’ve always considered you one of the car guys.
joel

Andy,
So glad that you’re coming along for the journey.
I’m actually almost done with the basic body decals, and damn does it look good enough to eat.

Of course, I’ll be around and look over your shoulder again, Joel. That all black chassis with a “Gold Bear” looks really striking!

Torsten,
Welcome aboard my friend.
The scheme even looks better on the body.

Hi Joel,
Yes it would be helpful if they listed which version it is for. They seem to be getting better at that. Certainly SpotModels tends to say which TAM code it is.

Michael,
I totally forgot about Spot Model cross referencing AM to the proper kit.
joel

Time for another update as I just finished decaling the body shell.

As I posted earlier, when I saw a few pictures of the Big Merc AMG GT3 Team Haribo car that ran in the 2016 24 hour Nurburgring race, I really wanted to model that car. So when I read in the Spot Newsletter that SK decals had a sheet for it, it was a no brainer to order one. After all, just how many cars have you ever seen sponsored with a big Yellow Gummy Bear on every side of it?

I’ve never used SK Decals before, so I was more then a little leery about the whole process, considering that the Bear actually goes through the exhaust recesses on both sides. I laid out my usual 3 part process of Micro Set, Micro Sol, and finally Solvaset, allowing the solutions to each work their magic, and only tamp or roll them with a Q Tip once the fluid started to dry. Any doubts I had quickly vanished as the decals were ready for application after less then a min in warm water. They’re super thin, yet quite strong, as they do take quite a lot of handling without tearing or stretching. I was really pleasantly surprised that the White, Yellow, and Red colors showed no signs of bleed though even though the body color was Black.

Not one single decal misbehaved, or balked at any of the solutions. The Solvaset made quick work of sucking the decals into every nook and cranny.

The hardest decals were those Bears which are printed in two pcs, the smaller piece is to decal the exhaust recess while the main decal dealt with all the concave and convex curves and shapes without an issue.

Here’s a few pictures of the body shell only through the decal stage. It still needs a mild water bath, then when dry the clear gloss with be air brushed on, followed by polishing and the 1st coat of wax. 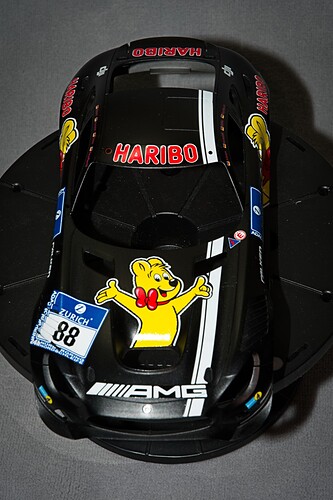 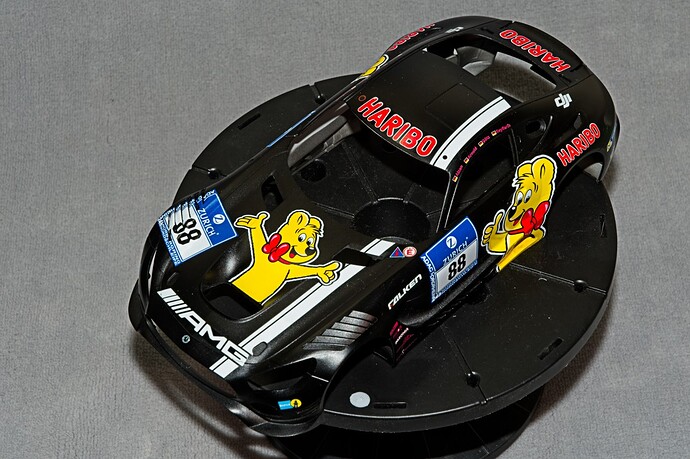 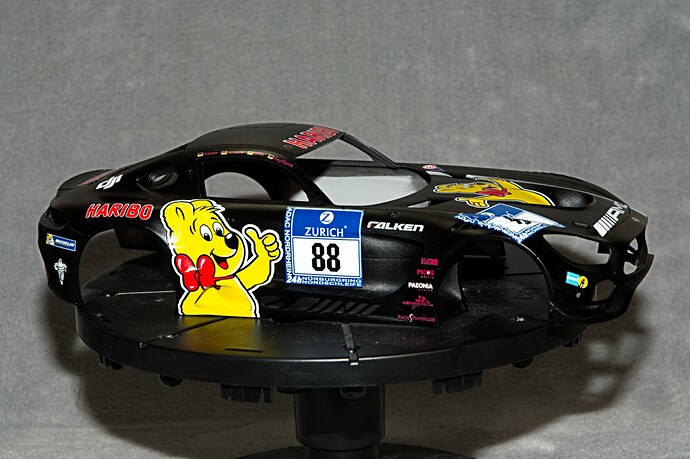 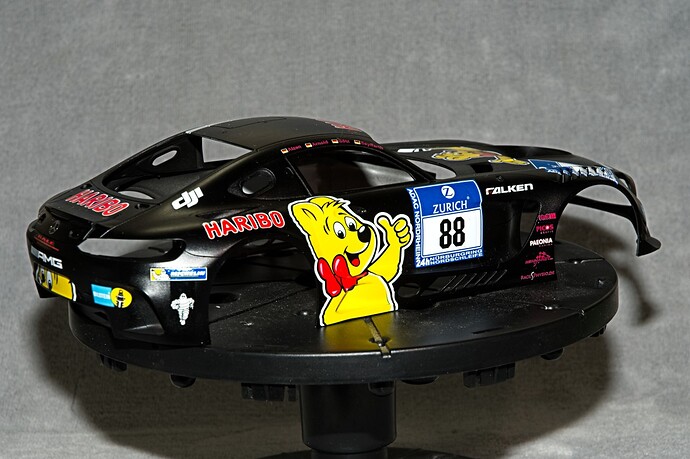 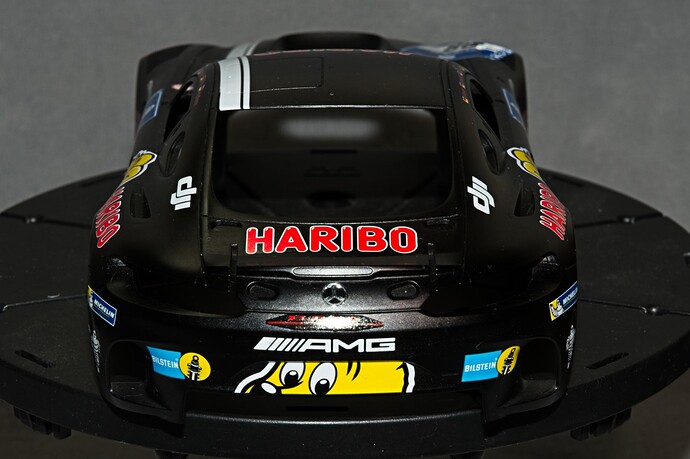 Those decals look amazing Joel, so good to hear that they performed as they should do (especially this such large decals).

Michael & D,
Thanks guys for stopping by and liking my decaling efforts. But the real heroes is SK Decals. I’ll be buying more of them for future builds for sure.

Great finish on the chassis with the “Gold Bear”, Joel! Well done! And if you also like to fly “GoldbAIR”, you might try this one …