Finished* as C Co, 1st Tank at Guadalcanal late 1942. She is a decent 3 footer. I used sticko for the headlights, brass wire for the antenna, Star decals and Hornet tanker head (only cause I lost a part for the Tamiya head). Tamiya colors for the tank, Vallejo for small bits and very light weathering. 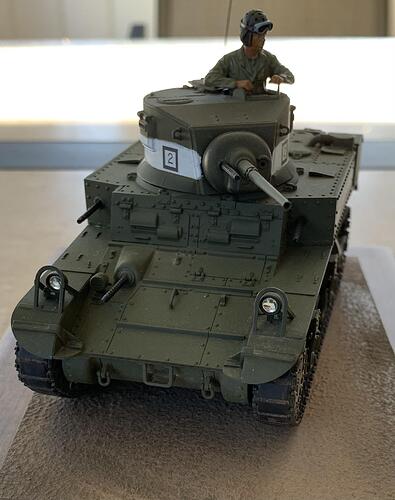 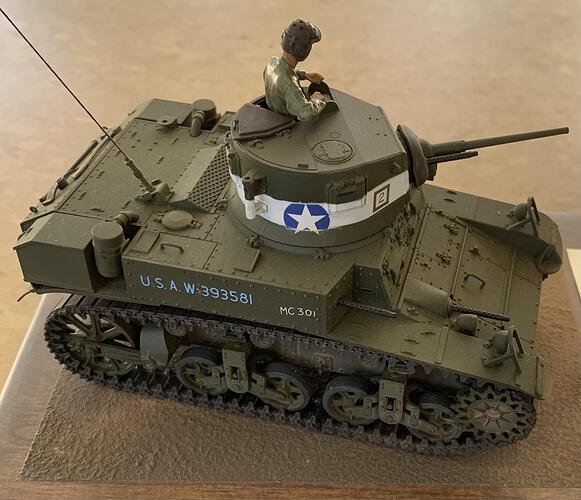 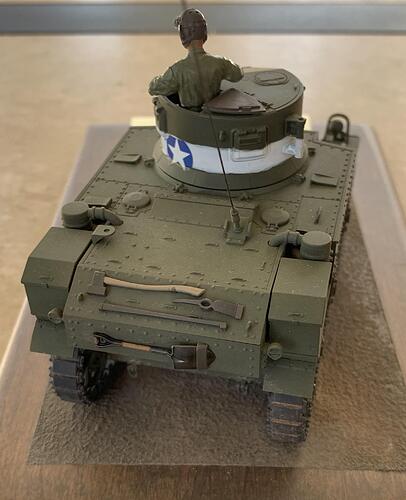 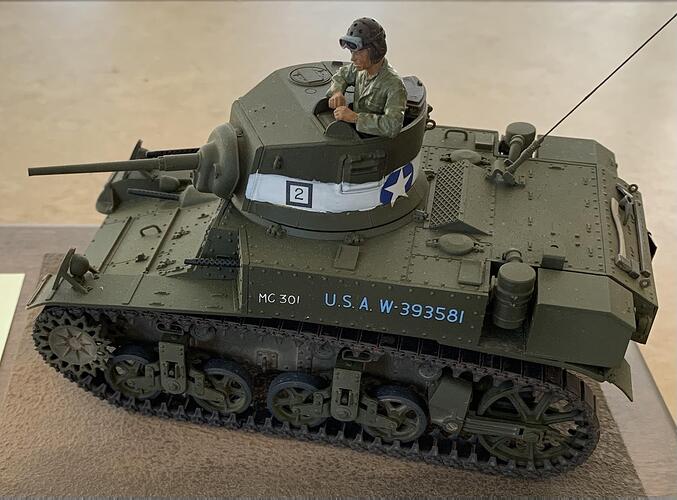 *in front of the tank on base I will add a better plaque then a sticky note. Waiting to have a few plaques to print off before going to kinkos.

Roy Chow posted lots of references links in my post on the old site if you needed more information on the real tank.
https://armorama.kitmaker.net/modules.php?op=modload&name=SquawkBox&file=index&req=viewtopic&topic_id=283942&page=1#2425707

Thanks and I agree. For this project, Charlie Co arrived as replacements near the end of Guadalcanal so I didn’t want to go overboard.

Excellent build, I’m a great fan of the ‘Stuart’, and you’ve done her proud,

Also, I totally agree with Justin regarding your paint job and weathering…I fall into the ‘overboard’ category, whereas your finish enhances the build as opposed to overpowering it.

Also, I totally agree with Justin regarding your paint job and weathering…I fall into the ‘overboard’ category, whereas your finish enhances the build as opposed to overpowering it.

Weathering is a very subjective aspect of our hobby. To me it depends on what your trying to represent. For this build it is a replacement company so mostly fresh vs the end of a extent campaign where it would be more abused.

At the end of the day if the modeler is happy with their build good on them.

I recall your jeep build where, again, your weathering was very subtle, maybe thought it was part of your style,

@Tank_1812 Ryan, to paraphrase the British, I think your M3A1 turned out to quiet a Honey of a tank build:) Very well done, I like very much.

Nice build. However, Tamiya’s kit is a late M3, not an M3A1. The sponson machine guns were deleted on the M3A1. Very early M3A1’s were built side by side with late M3’s, and initially shared the fully riveted upper hull, and squared-off rear section. Eventually, the upper hull was largely welded, and the two-piece, flat engine access panels at the back gave way to a one-piece curved panel, all mounted by large, slot-head bolts. There is, at the moment, no styrene kit depicting this definitive M3A1 version, which was used extensively in the Pacific.

Thanks and good point. Roy Chow built a A1 from the kit. I mean to do that later with the kit. Lots of parts are easy to make from styrene to replace the bolts.

Stuart/Honey aka M3/M3A1 - all I know is it was a nasty little light tank in the old original Avalon Hill - Squad Leader/Cross of Iron/Crescendo of Doom/G.I. Anvil of Victory game with four MG’s to hose German infantry squads with

BTW - have to mention one of my favorite WW2 books

"Brazen Chariots" by Bob Crisp. Outstanding account of a M3 commander in WW2.