I was just going to clean up the bench, really, and I had to move what I had considered a permanent shelf queen out of the way. Well, after a quick look at where I’d stalled, I thought “why not?”. My original intention, probably seven or eight years ago, was to “correct” the upper glacis and build something more “accurate” than the Tamiya kit. About the time I got the hull together and the glacis hacked out and replaced with sheet stock, it came to light that Tamiya had actually done a pretty decent T-72M1, at least the hull. Turret shape and size is still up in the air, to the best of my understanding. And I had a Miniarm “Ural” turret in the box, along with an RB barrel. And a set of ready-to-go Friuls from an OOB build 20 years ago. I also had a little bit of PE for the T-72 and a bunch left over from various “T” tanks. And lastly, after the Challenger builds, I needed to do something different, so with the two “Armor in Syria” books from Abrams Squad in hand, I dug in. I don’t have to be totally accurate, and a lot of the fiddly stuff is “gone” in the pics anyway, so after a couple of days, here it sits: 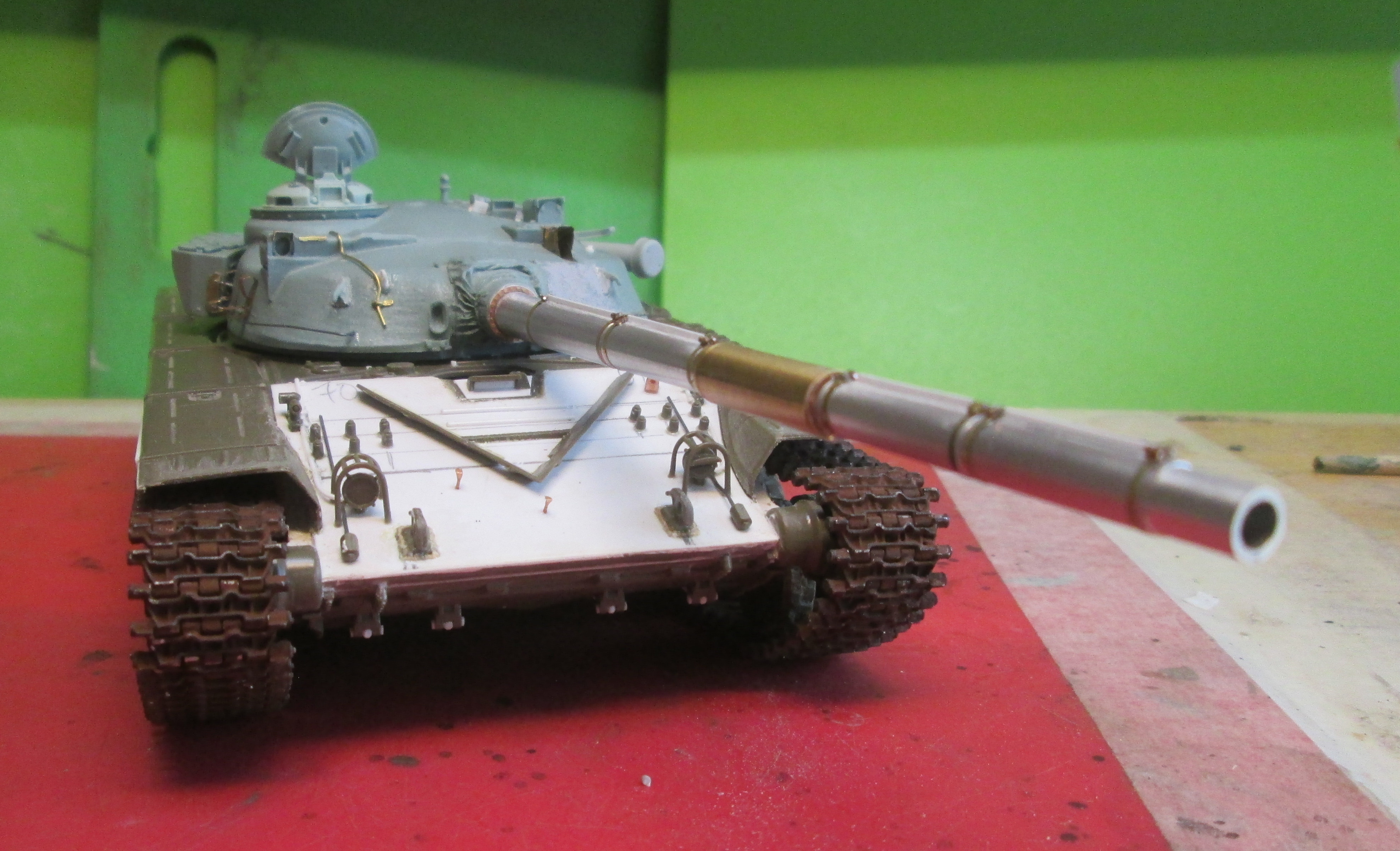 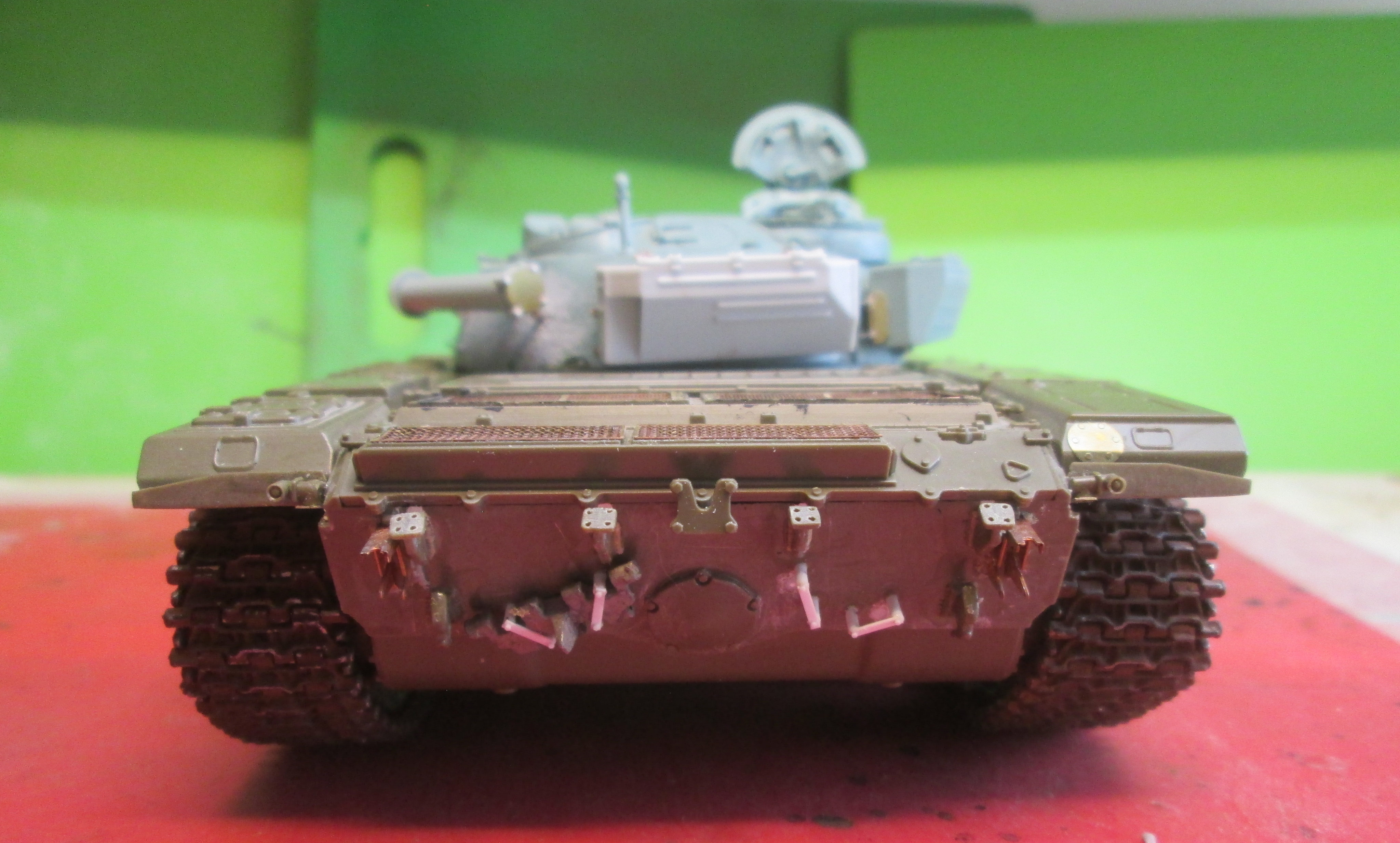 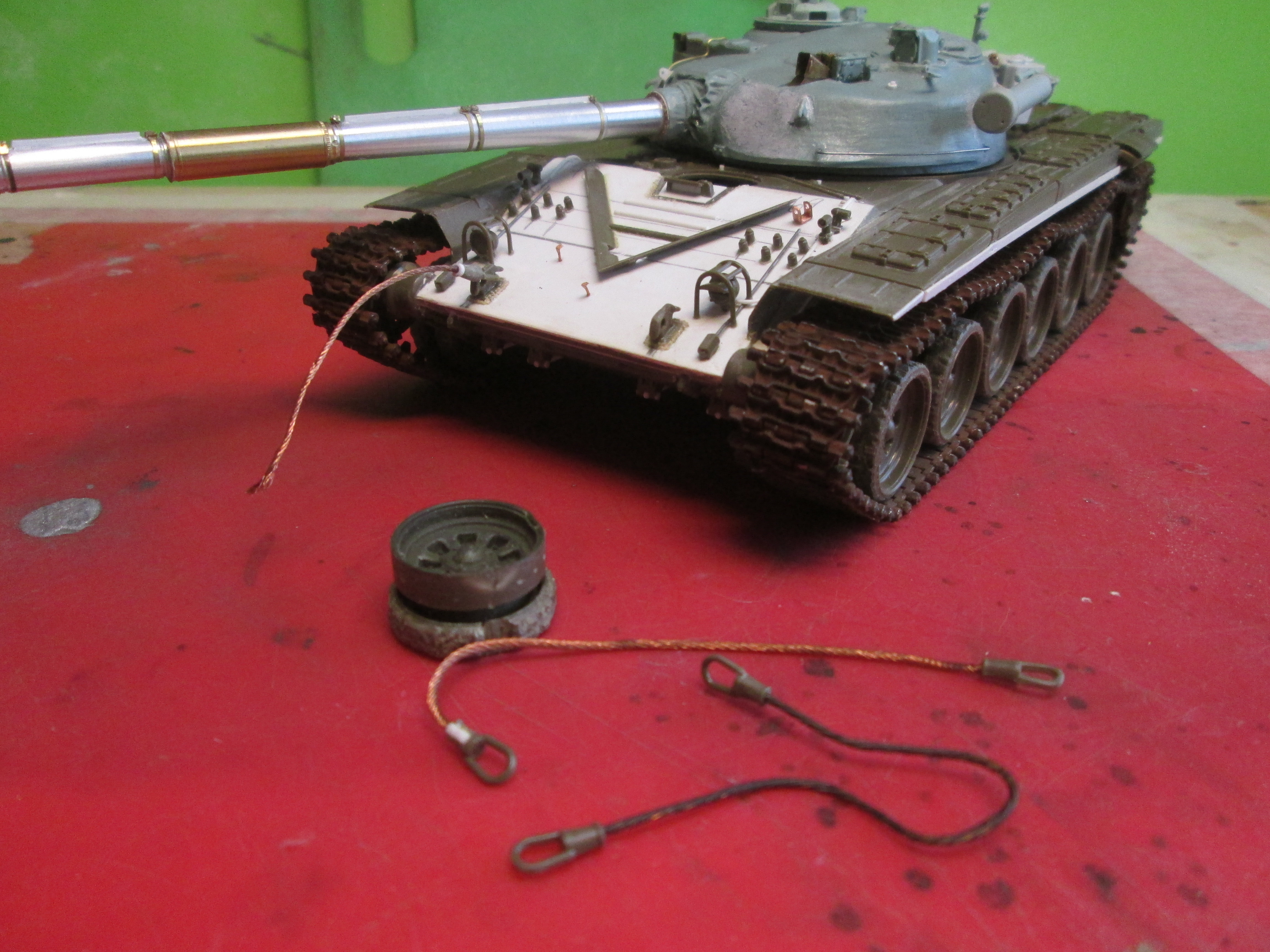 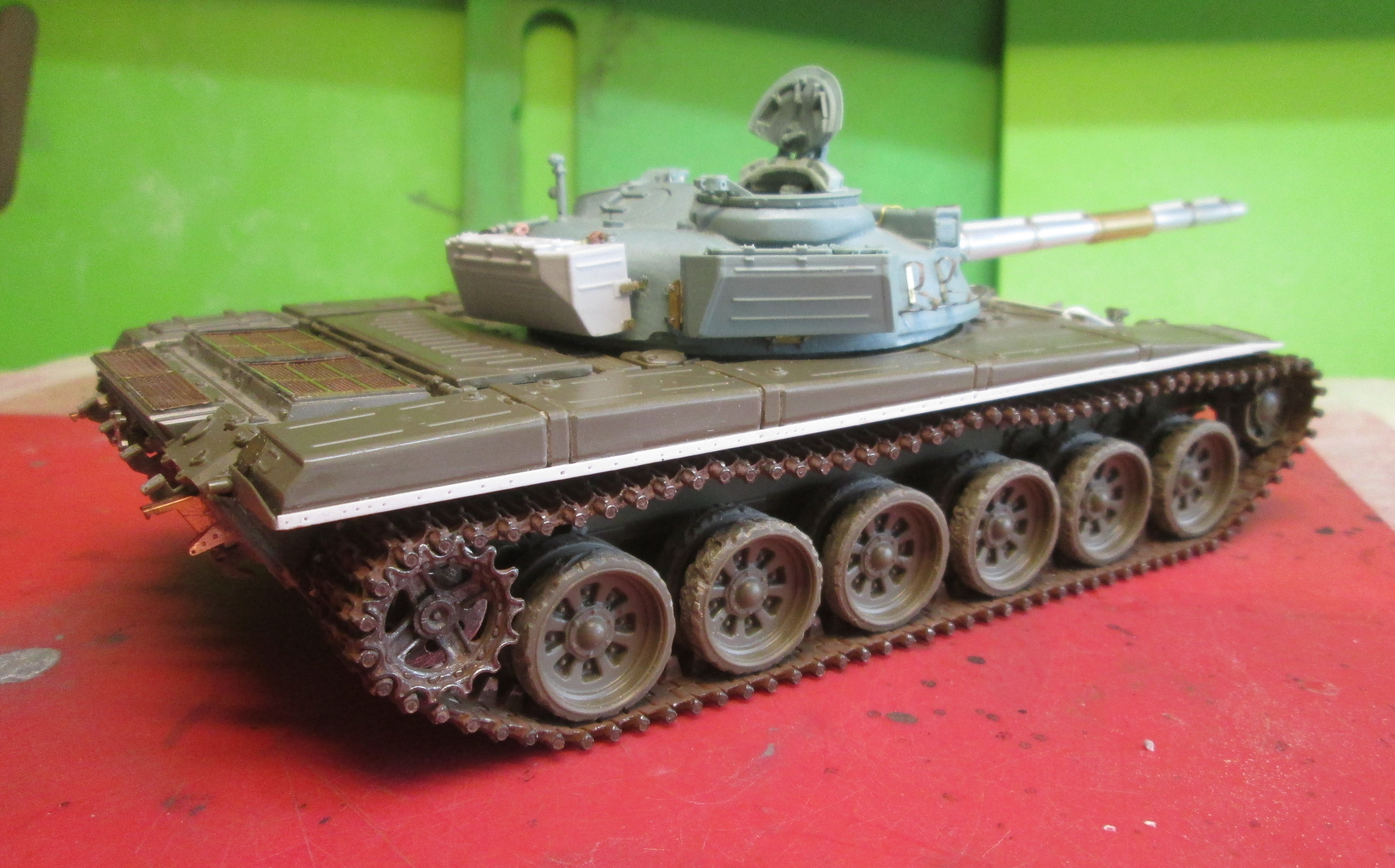 IMG_3620 by Russel Baer, on Flickr
I haven’t built anything beat up in a long time, so one of these rolling wrecks was fun. Painting should be a hoot.

Looks pretty good to me. You should have plenty of different finishes and even markings to consider if it is to be a sort of ‘rolling wreck’ as you said.

Thanks all.
Yes, it’s going to Syrian, great examples of just how bad a tank can look and still be (mostly) operational.
Good idea Sean, thanks. I beat up the tires with a couple of grinding bits in a Dremel, and a nice new #11 blade, just a lot more than I usually do. I’m thinking of using the one in the foreground of the fourth pic with one tire completely gone, not sure yet. I think I’ll hang the broken tow cable off a rear hook, just for animation.
I plan on a tan pattern over green, with lots of paint damage.

Great subject choice! I love the early T-72s, and can’t wait to see what you do with this one. 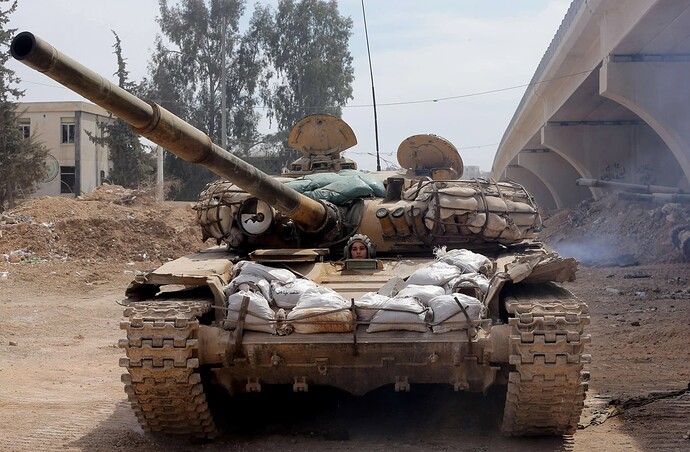 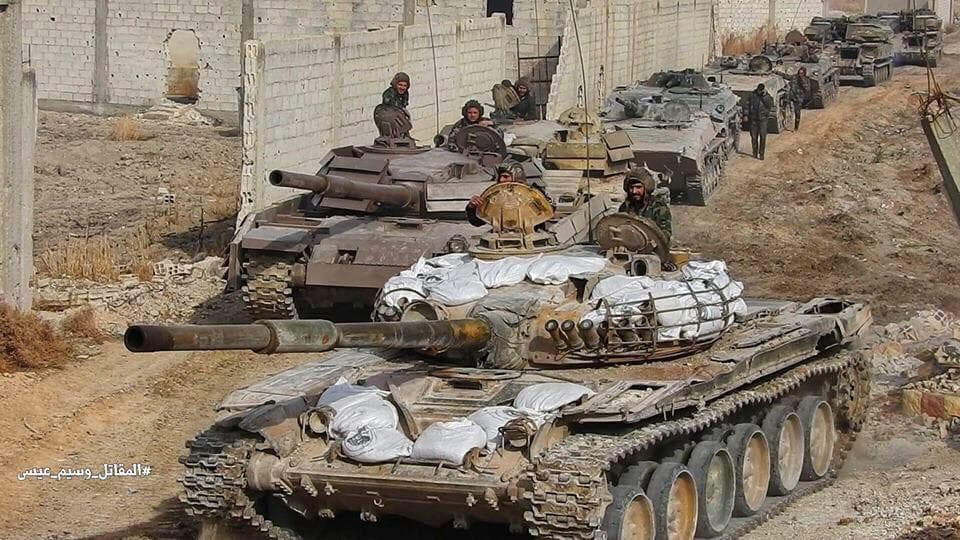 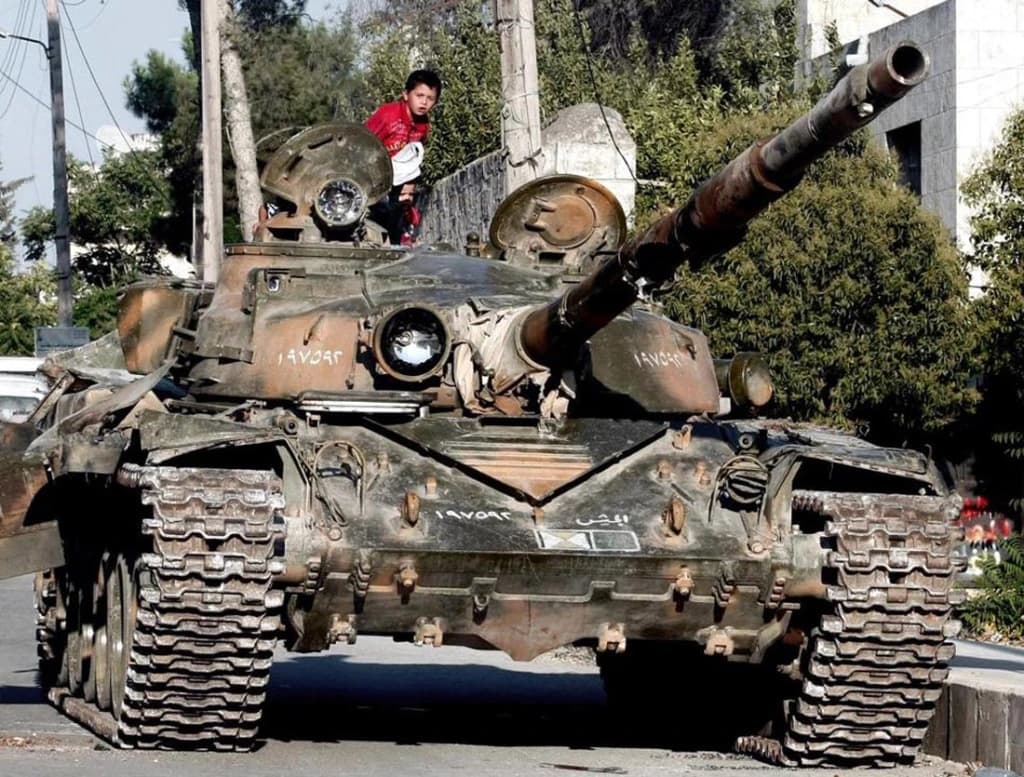 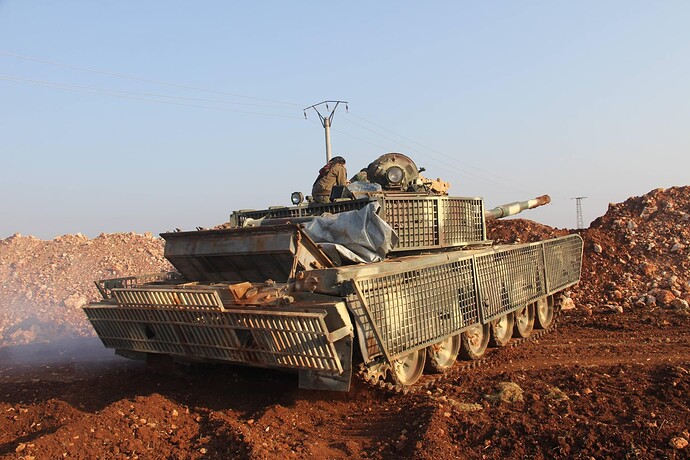 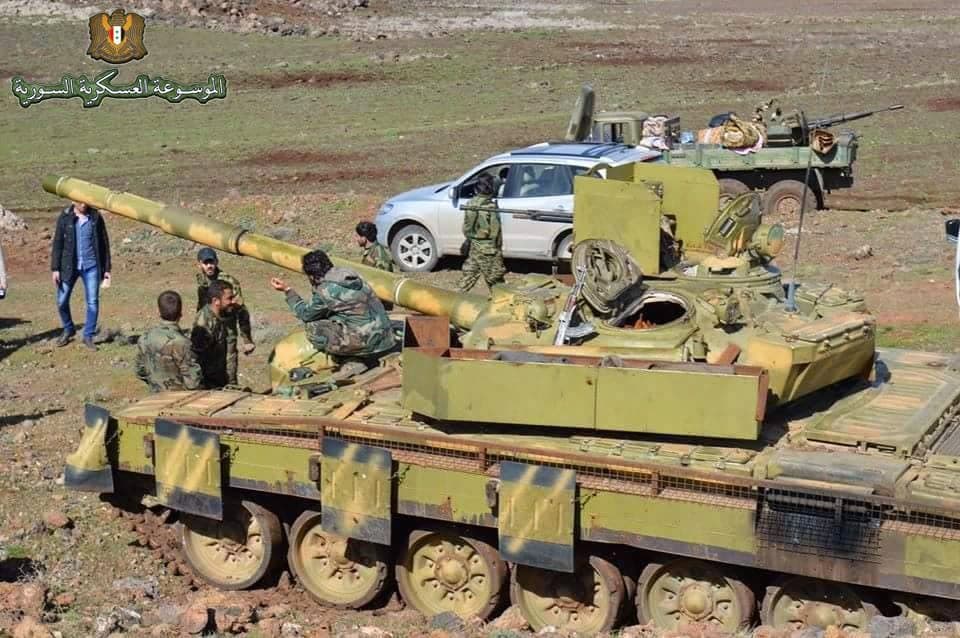 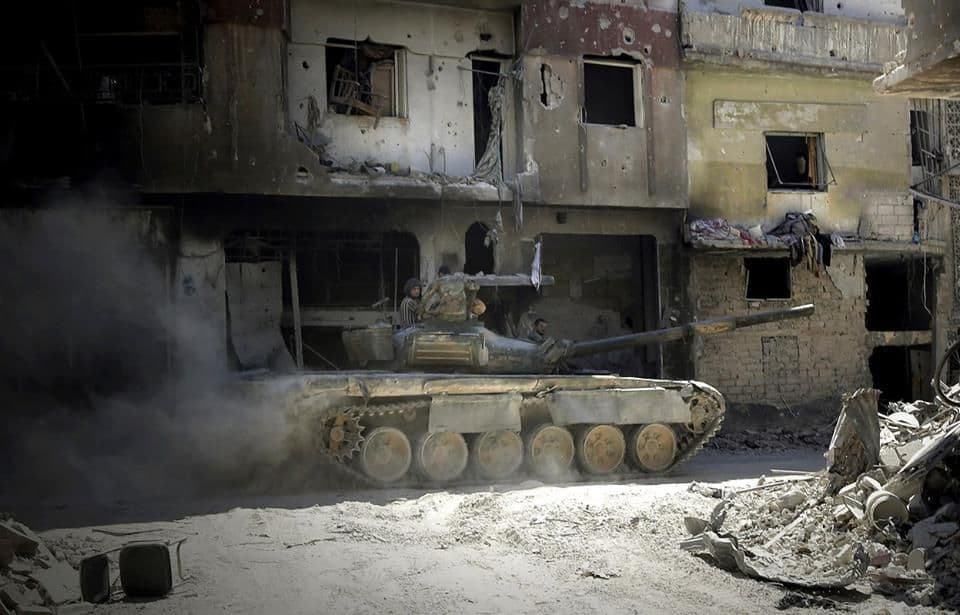 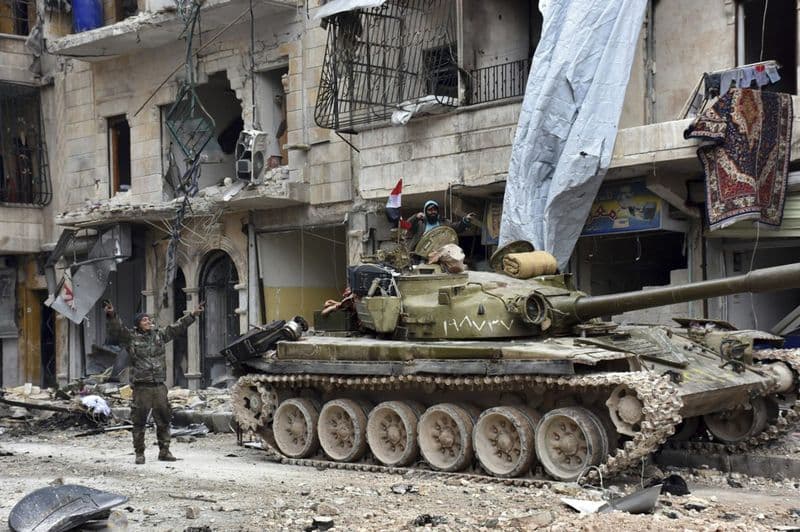 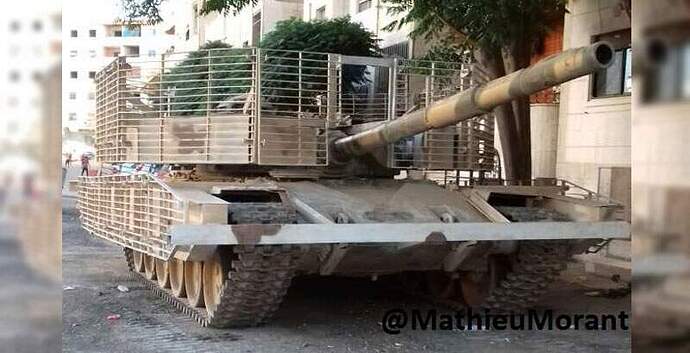 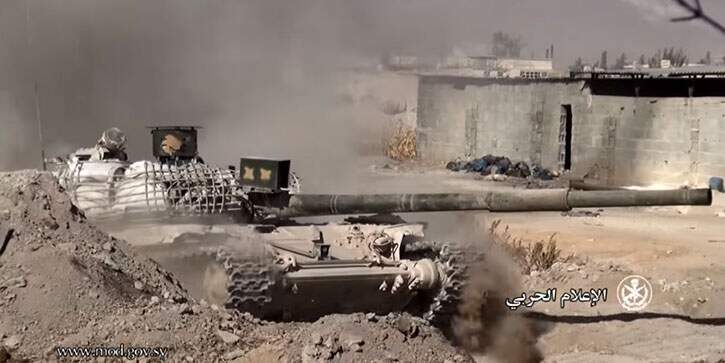 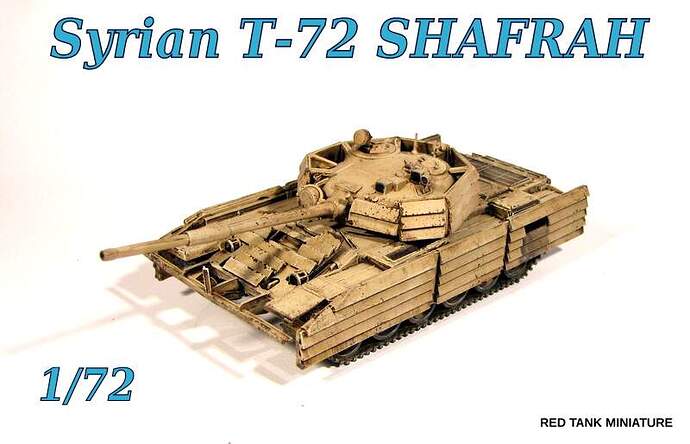 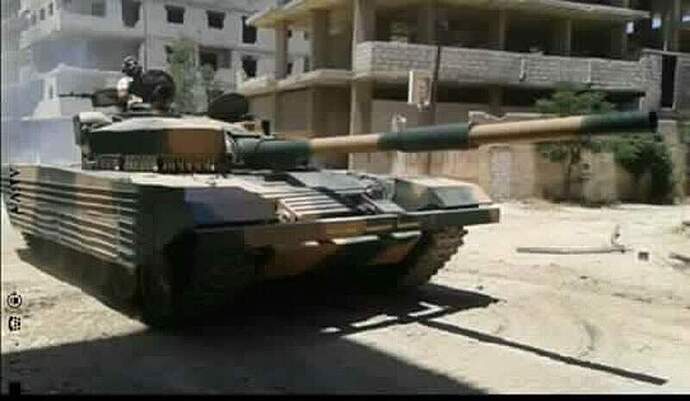 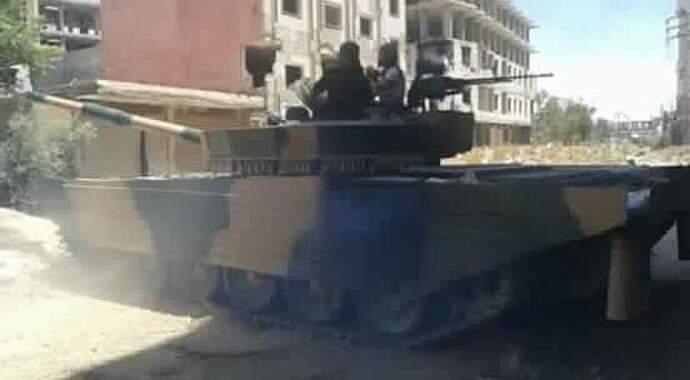 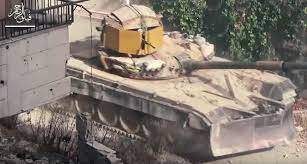 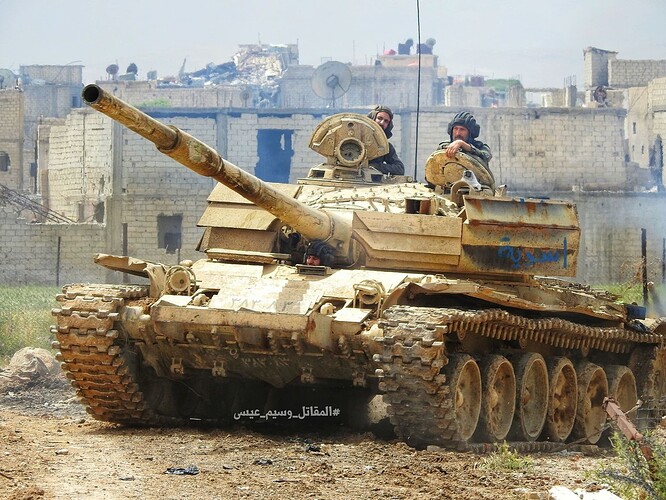 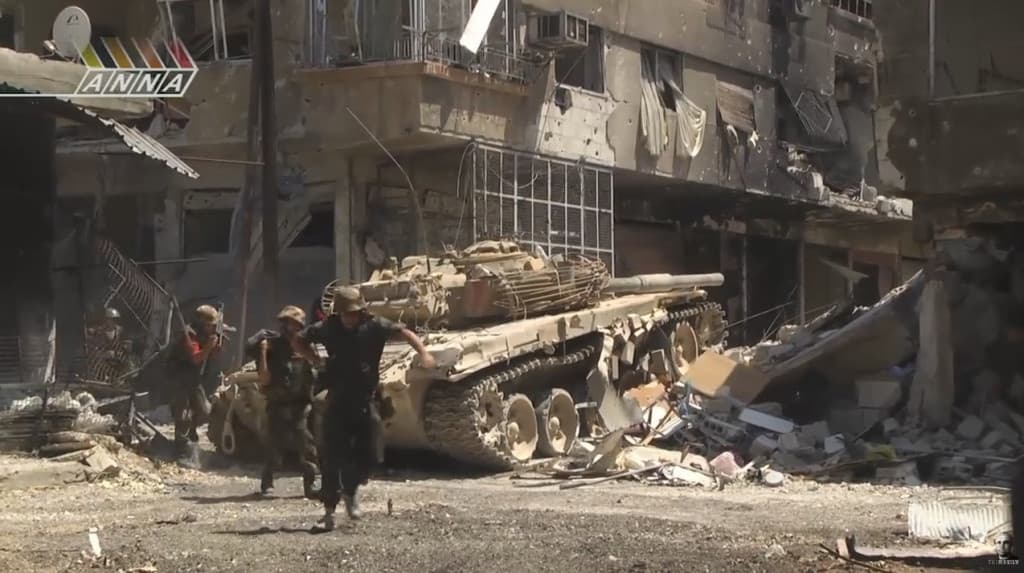 Great pics Greg, love some of that improvisation with the add on armour…

Great examples of truly beat up tanks. Some of the add-on armor looks a little impractical, to say the least.

This is a new process for me, and I like it so far. I started with a decent coat of Tamiya AS-22, a nice medium brown color and let that cure overnight. Next was a light coat of my wife’s medium-hold hairspray followed by several very light coats of Vallejo 4BO Russian Green, also from a spray can. After about 30 minutes, I started lightly scrubbing with a junk brush, bristles cut down to a nub. I have lots of those, stashed with my pastel powders… At first the Vallejo color came off instantly, so I put it aside and waited until the next morning, began again and got better results. In places where I took off too much, I added color back with Panzer Aces “Camo Green”, using a variety of brushes, old and new. As it’s pictured below, it has a coat of clear flat over that to protect it from further steps. Next will be a yellowish sand color in irregular splotches, copying the pics I have best possible, with the same process of scrubbing afterwards.
I also beat up the side tanks and storage bins, too much I think. It’s a good thing the plastic was thick there. 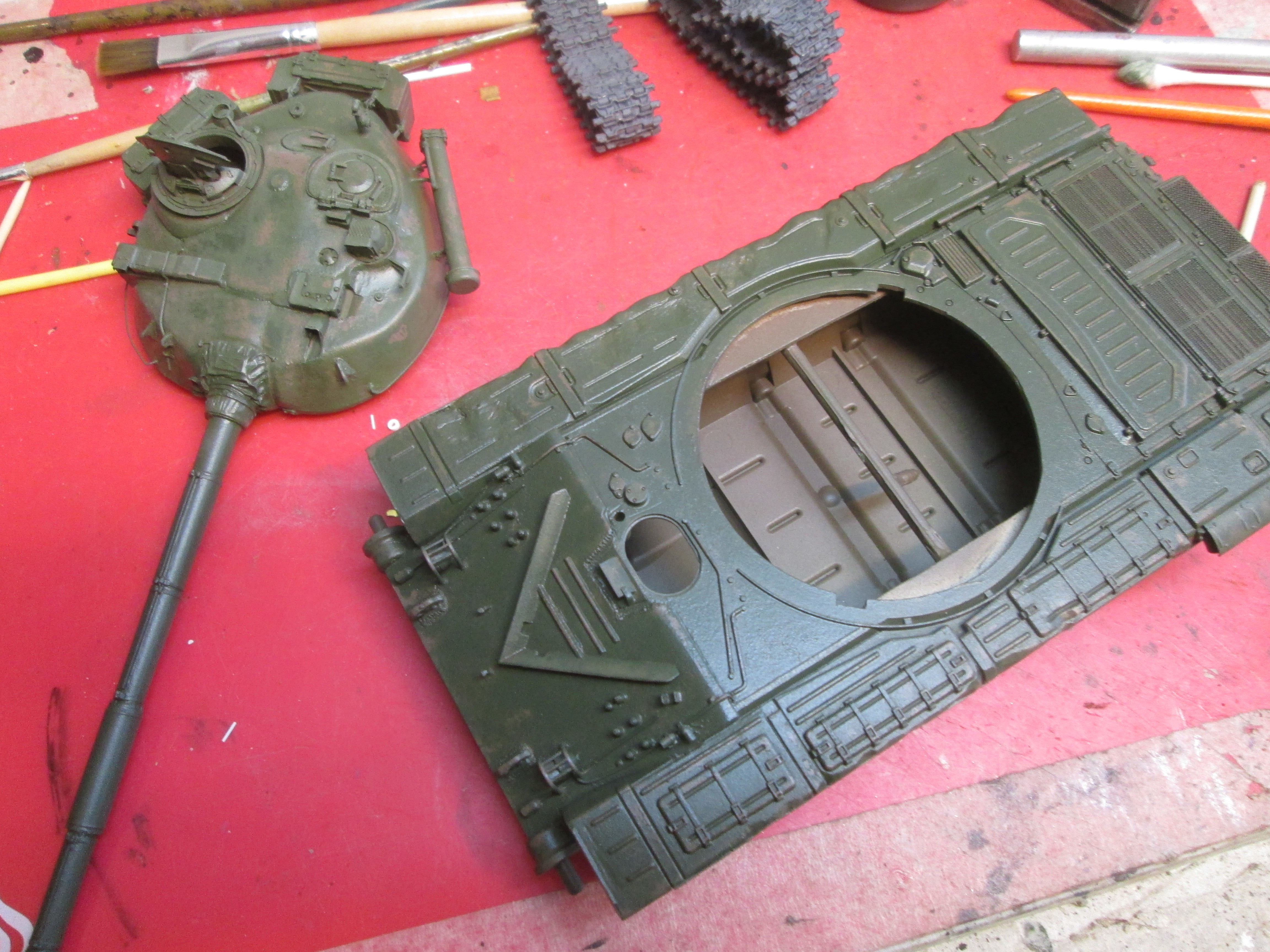 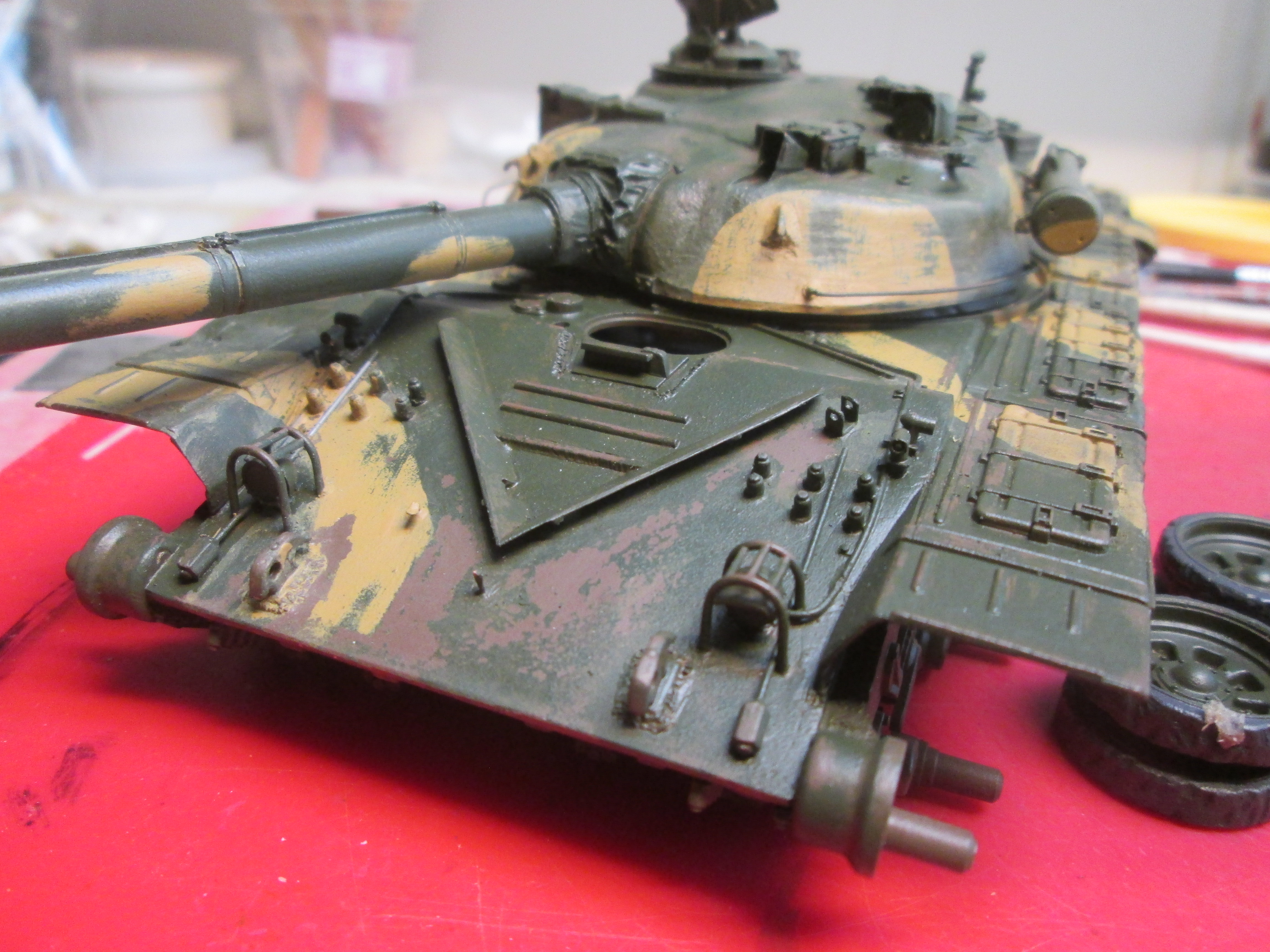 IMG_3627 by Russel Baer, on Flickr
Keep scrubbing or seal it? It’s going to get a HEAVY dusting with gray and sand pigments, so much that a lot of the low traffic areas will be completely covered in pigment. 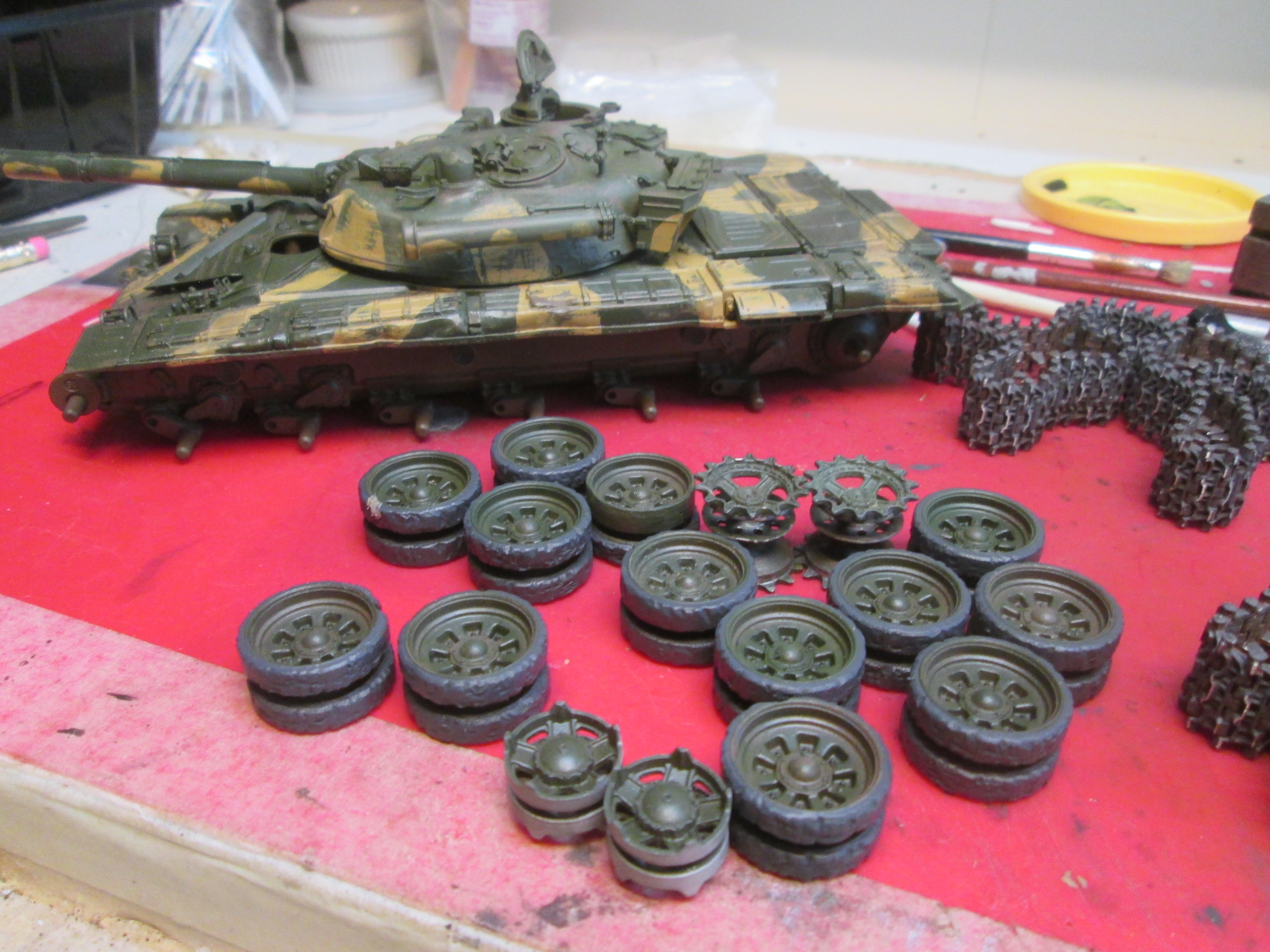 IMG_3626 by Russel Baer, on Flickr
The wheels will also be in thick, opaque pigment dust. In the pics I have, the lower hull and running gear might as well have been painted gray.

It’s up to you of course, but I would quit now, otherwise the following actions will totally cover up what you have already done. Been there, done that!
Ken

Russ, if you’re at a point where you have to ask, then it’s definitely time to stop. It looks great now and you want to leave something to see under the dust.

Like Ken and Matt said, I think you need to avoid hiding to much with to much dust.

however, this bad boy has really been through it all. 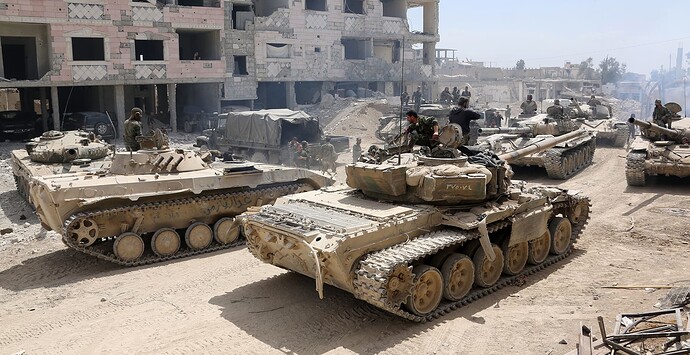 Wow that is one beat up tank.

I’d say that’s extreme weathering; caked on dirt and dust. A weathering paradise for those so inclined.

Theres a few different views of it, but its had a hard unloved live for sure

Actually all the vehicles in that picture are pretty much the same. No time for the wash rack let alone repairs I guess.

A different wagon but you see a pattern emerging lol 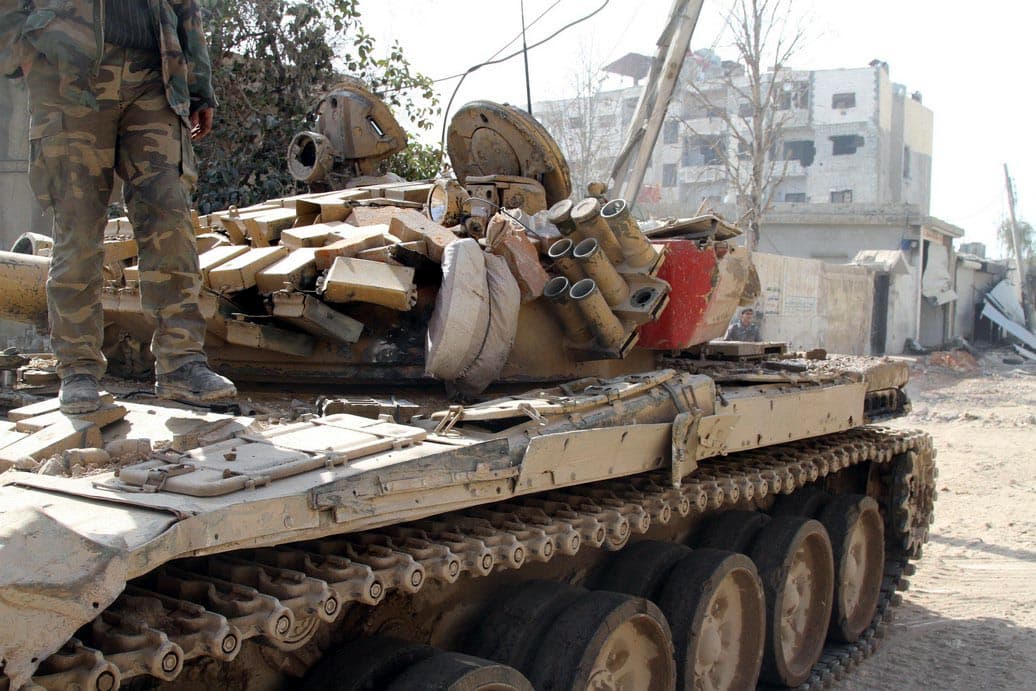