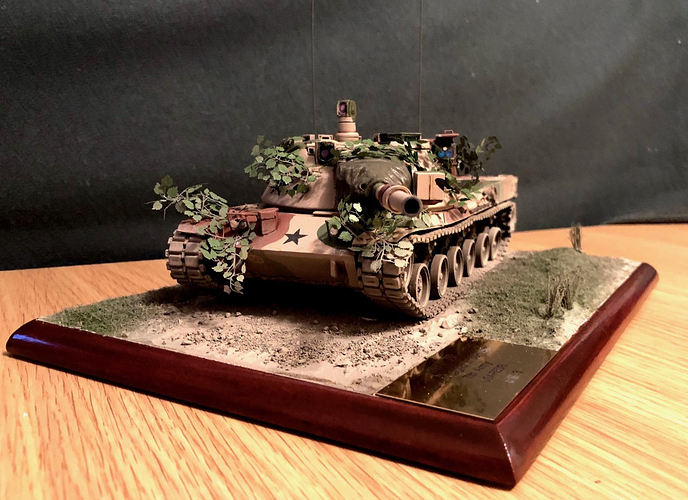 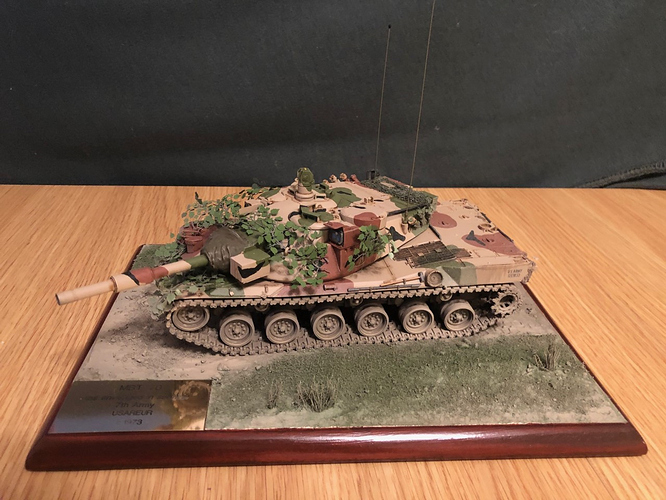 Wow - that seemed to work - unless it’s appearing only on my screen. If indeed it has worked then here’s another. For those interested it’s the Commander Models kit with AFV Club tracks. I’ve modelled it as it might have appeared in service in 1973, which is why I’ve applied the MASSTER/7th Army camouflage scheme. I sort of thought it might look as though it’s hunting T-64s(!)

PS If this is not showing presumably someone will tell me; also any hints how to post more than one might help.

Brian it’s showing just fine. To post multiple images, after you hit the choose files button, hold down the Control button on your keyboard while you are clicking on images. They will all upload at once.

Thanks for the confirmation, but in both cases I just opened a sort of new topic box and copy and pasted the images; I did not encounter - let alone use the “choose files” button, but I’m more than willing to try and get the hang of this (even if I only end up cutting and pasting singletons) - all huge leaps for me - but immense progress after floundering for so long in not adding pictures. God knows I’ve made enough noise in the past without being able to support with pictures of my builds so the new site (and its methodology) is very welcome.

Thanks for your help!

Brian, Just click on the little “sun and Mountain” square from all the symbols at the top of the reply box. It will then give you the option to choose files from your device. Then proceed with the rest of my tip and you have a slew of images all in one post.

Many thanks for your patience in dealing with a Luddite such as me(!)

Brilliant - I think even I can manage that - that really is very helpful; I’m not in a great hurry to post anything at the moment - my MBT 70 posting was really just an experiment - and besides is really a sort of What-If so may not garner much interest anyway. No, really, it’s very helpful of you to bother.

Thanks Robin; I think the new site may well give me a new lease of life!

You made it, clearly in more ways than one! That looks great Brian – are those aerials sprue or wire? Well you said it, next job is making another base to put this on… 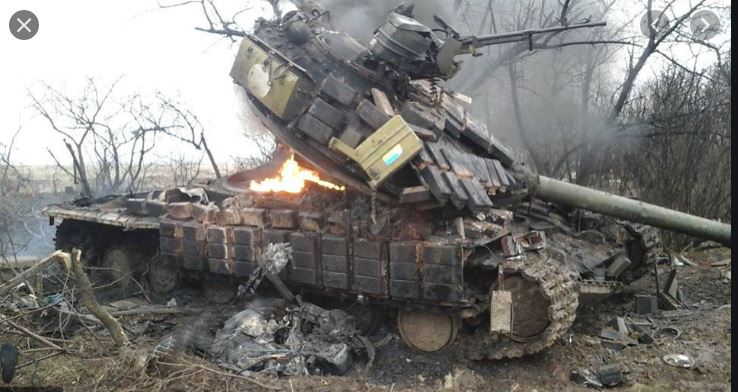 There are enough of them… geese…

Didn’t realize the emoji library was quite that huge.

Thanks Tim, very gracious of you!

Re the antennae, I always use brass wire; for US vehicles I normally choose quite a thick one as in my experience, they are fairly substantial. For the rubber protectors on the ends I use superglue then invert the whole to assume the correct shape as it dries. Sometimes I need more than one application.

The T-64 picture ties in nicely perhaps - a hell of an image - might be a challenge too far to model that one though - at least for me(!)

Not a big fan of what if tanks, but I like that! (What if in the sense of the paint job)

Thanks James, I’ve always been a fan of this vehicle ever since it appeared as a cutaway drawing way back in 1968 in my weekly comic; it was pretty speculative as it showed the driver in the hull as opposed to the turret but my imagination was stirred. The wait over a couple or so decades was just about worth it I think - with Dragon producing the German version and Commander Models the US one. 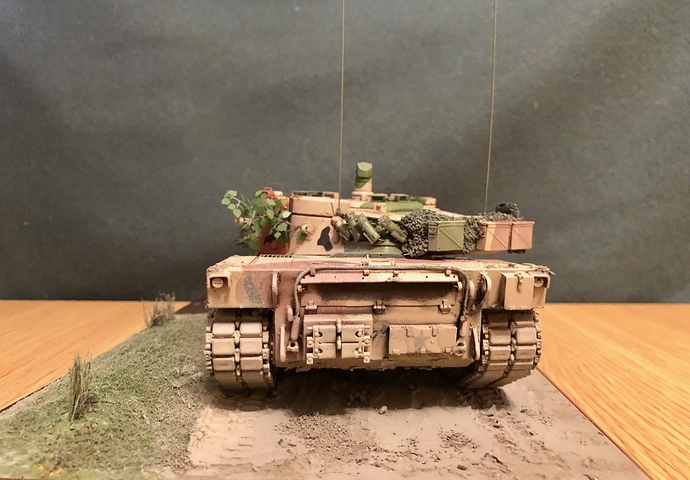 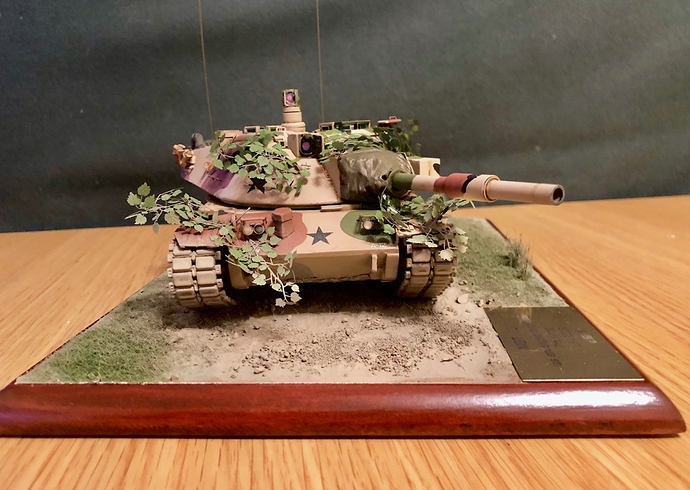 Here’s a couple more pictures (if I’ve uploaded correctly); I tried to keep the “What-If-ness” to reasonable and logical parameters and restricted this to a mantlet cover and some 40mm ammo boxes on the turret rear for crew possessions as there wouldn’t have been that much room anywhere else I imagine with everyone in the turret. I added a spare track link on the hull rear stowage box though whether or not the box could take the weight I am unsure.

I have a couple more of the Commander Models kits and plan, eventually, to complete a true prototype and say, possibly one in the MERDC scheme with a few more modifications, so still in the What-If category.

Very sharp work! I was hoping that Dragon would do the US version in addition to the West German variant that they made. Perhaps one day they still might.

Thanks Carlos; whilst the turrets are pretty much identical the US version’s hull is notably different and you’d have to be a real Ninja at scratching to convert the Dragon Kpz 70 to the US version. Perhaps you are such a Ninja? I’m not so I saved my pennies and bought the Commander Models one; it isn’t too bad a kit and I think was only about the second full resin kit I’d built. Once I laid out all the parts, removed all the resin runners etc it wasn’t actually as daunting as I first thought. At around 160 $ it isn’t cheap but is the only game in town. I don’t think it comes with the AFV Club tracks anymore either but I haven’t ventured into their website for a while.

Finescale Modelling Magazine did an article on it by Cookie Sewell and that helped quite a bit. Despite the price I’d recommend it.

We must’ve seen the concept for this tank about the same time, what, about 40 years ago? I really like the lines of the hull and turret. If you wanted to go full blown “what if” you could cover it in the DUPLEX (digital) scheme since it was being conceived and feild tested about the same time the '70 was prototyped. Just a suggestion mind you, I know you have your mind set on MERDC. It’ll look good either way.

I could possibly scratch build the US version engine area conversion for the MBT-70. From the photos and drawings that I’ve seen, that area does not look overly complicated with excessive grill work and such. But with my luck, as soon as I got to about the 80% completion point, somebody would come out with an injection molded kit.

Terry - this tank always caught my imagination (probably because of the propaganda effect of my comic) but also it just looked so very different from the rather staid and ponderous-looking Centurions and Conquerors way back then (God, I must sound ancient). It looks so sleek yet powerful. The Dual-Tex scheme (which is what I think you’re referring to - pedantic bast*ard me) is an option as I might, just might, be able to accomplish that one; the more recent renditions of full-on digital cam would defeat me |I’m sure. MERDC is not off the table by any means; mind you, I’m not too sure when I’ll ever get around to this one. So many models (and tangents!),so little time…

ha, LOL! I knew when I typed in DUPLEX it didn’t sound right.