Ok, so although it probably started in the cold war, the Eagle is still going strong so I threw it in the modern category.

This is the bird in question. 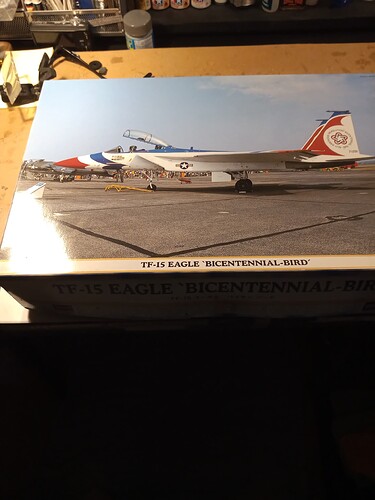 I was never going to do it in this configuration… But while looking through the online images and using the tail number, I came across this version after it had been upgraded. I’m not sure if this was the stepping stone to the Strike Eagles ? Maybe an aviation guru can shed more light. 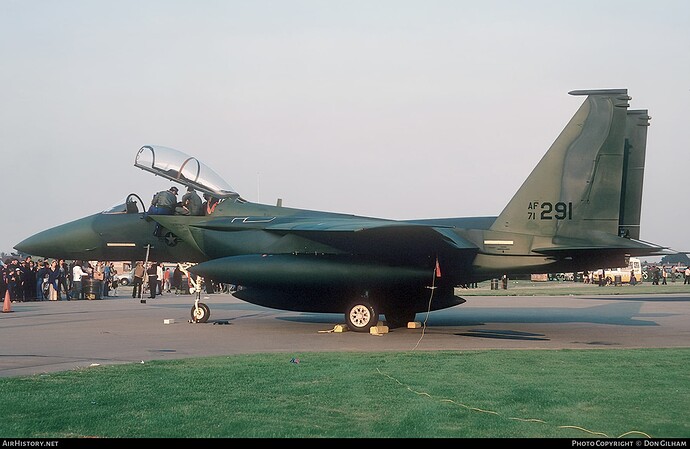 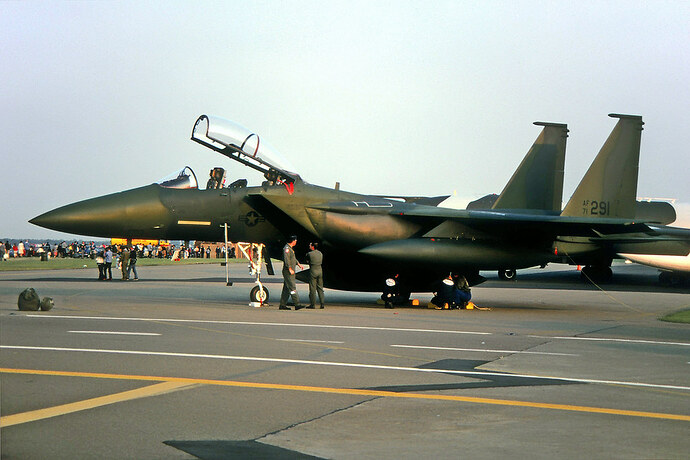 So this is the version, or at least the paint scheme I will be going for. Now you may probably know I’m normally a tank and armour man, but did just recently do the kinetic F16C IAF version and really liked it.

So you know, this wil be a slow burn build, and sadly not 100% perfect as the cam version has what looks like new bulge areas on the air intake ducts ? And my kit one doesn’t, so a bit of artistic licence will need to be allowed I’m afraid.

I have just primed everything on the sprue to get it started. I won’t be buying anything for it if I can help it, but if they do a decal set I would get that, if not, I will have to have to try and print my own.

Ok, so I’ve almost answered those questions myself lol…

The F-15E’s colour scheme has me intrigued. Have you got any more info on it?

I’m slowly reading up on bits and pieces for this one as it is interesting.

As far as I can work out, the Bicentennial and the camo version shown above are the same bird as per the tailplane codes, which was a YF15B Eagle. AF71291.

In the cam version, it had seemingly gone through some refits and had things like the bulged areas added on the air intakes …(would they be for fuel or aerodynamics? ) I also think it may of been the test and development bed for what would turn into the F15E Strike Eagles… I just liked that cam scheme as it looked quite badass…

That aircraft is indeed the Stike Eagle prototype, being converted from a F-15B. The colors used are the same as on the F-4E & F-4G during the mid 80’s: Green 34079, Green 34102, and Gray 36081, also known as Europe One or “Lizard” camouflage.
The fuselage bulges are FAST (Fuel And Sensor Tactical) packs. Basically those are removable conformal fuel tanks that also have hard points and working for weapons and sensor pods.

Thanks Carlos for confirming it

Should my heading be TF15B or YF ?

You’re quite welcome. Some photos show that the 34079 may have been replaced with 34092 green to use the same colors as the A-10 of that era. Also there was a program with some F-16s in the same scheme to supplement or replace the A-10 in the CAS role. We know how that has worked out…

I look forward to seeing your build of this. I love those experimental camo schemes of that era. 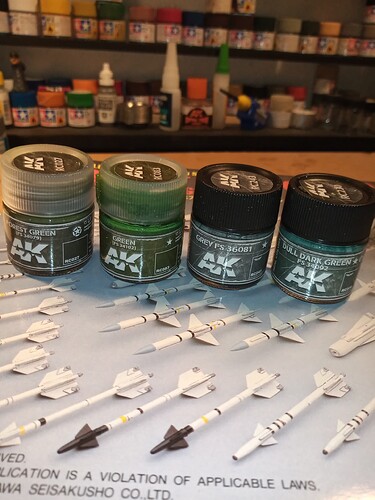 And the Hasegawa weapon set C …I only need the decals really but hey ho. 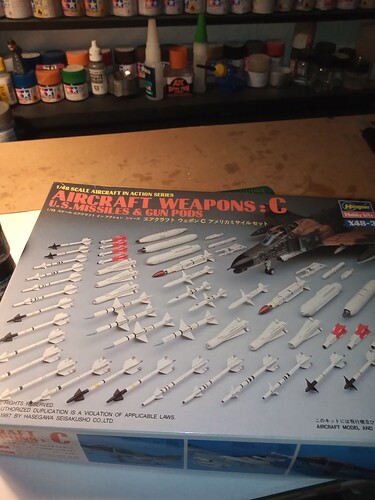 Just waiting for the PE and decals now

Spotted this image on RC Universe… 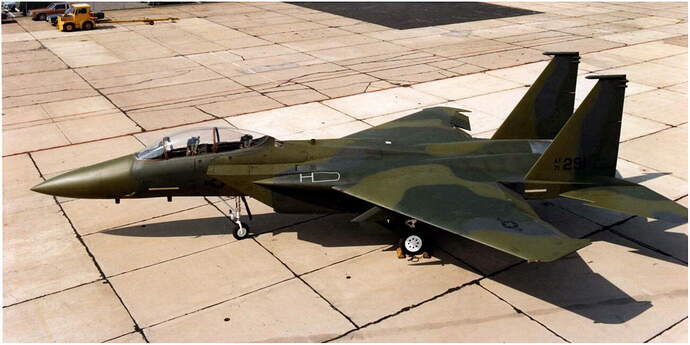 After playing with the contrast a bit 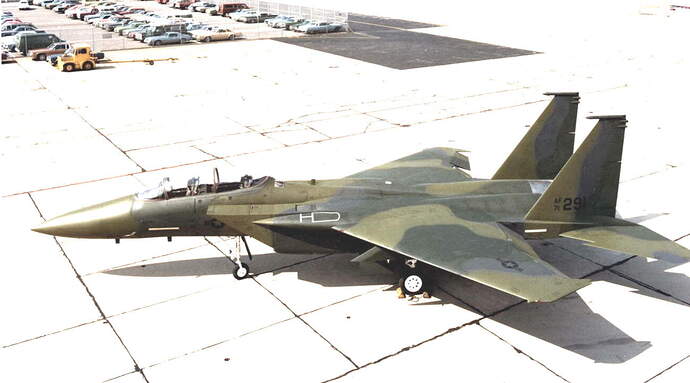 F-15B-2, AF Serial 71-0291. Began life as the second TF-15A. The AF decided to change the TF-15A to F-15B as the “family-models” are fully combat capable and not used solely for training. The F-16 and F/A-18 follow that system. AFAIK “YF” was never used on 291 as originally it wasn’t a prototype for the F-15E, but a technology demonstrator for the McDonnel Douglas conceived Strike Eagle concept. At about the same time the AF was looking for an F-4 / F-111 replacement and settled on the Strike Eagle, designating it as the F-15E. 291 was also the first F-15 to use Conformal Fuel Tanks.

Welcome Curtiss and thanks for the info. I will remedy that header now. Many thanks 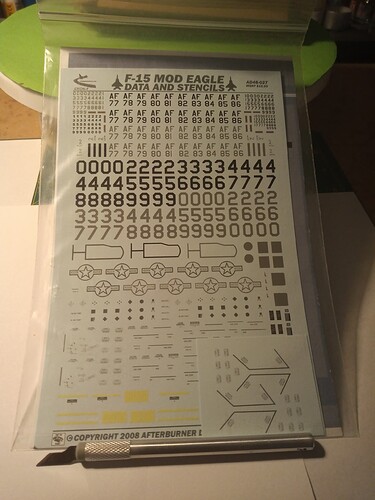 Look quite nice. Will need to do a bit of cut and splicing but won’t be an issue 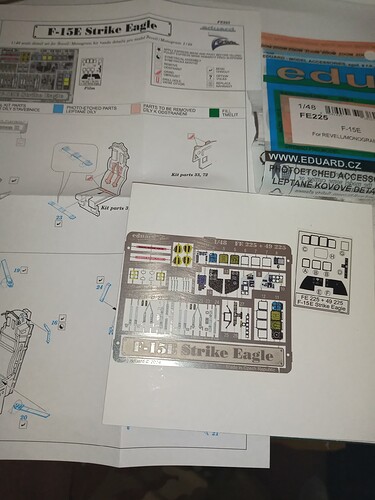 Looks like a nice little set. Only £6.50… do nothing really.