The 80th Anniversary of The Guadalcanal Campaign

Group Build Title: [The 80th Anniversary of The Guadalcanal Campaign]

Group Build Description: [August 7, 2022 marks the 80th anniversary of the Guadalcanal Campaign, or Operation Watchtower by the American forces. This campaign was fought between 7 August, 1942 to 9 February, 1943, on and around the island of Guadalcanal in the Pacific Theater of World War II. This group build will commemorate this anniversary to include any subject, any scale as long as it was involved in the Guadalcanal Campaign. There are a lot of subjects for this one!]

Completion Award: [I’m confident someone can do a decent award, as my skills in this area are wanting.]

Definitely would be up for this!

I do like the idea, will depend on bandwidth at the time.

I will do something for this.

I am in! I believe I have some models from the Cactus airforce somewhere in the stash.

I think I may have posted this campaign idea too early. Thanks to Tom for editing the intro to include the counter. So here’s to getting a few more votes to make this one a reality!

So here’s to getting a few more votes to make this one a reality!

I don’t believe the 10 count is a requirement anymore.

OK, I’ve got the new tool Airfix F4F-4 with Cactus AF markings. I’ll give this one a try.

Yes, it’s 1/72. I’ve tried to start it twice, lost a critical component both times, got one replaced, to embarassed to go back for more. So this ones going to be wheels up.

I think the FA-2 Brewster Buffalo was there…

Hmmm. I don’t usually join campaigns; but I have a 1:35 MMK resin conversion kit M2A4 Light Tank which only saw combat in Guadalcanal.

Maybe I can join the group …

Hi Everyone! Anyone any good at making ribbons? I’m not, so any help would be greatly appreciated. thinking an outline of the island and perhaps an 80th? There’s also the Marine makeshift ribbon that had the fan with a cow on it. Again, any help here would be great!

So I guess this is live now?

This campaign is now Active with it’s own category thread.

80 years ago today, the US Marines landed on the island of Guadalcanal and Florida Island. This marked the first offensive taken by the US in the war with Japan. The battle raged for six months, the same time as we’ve given the campaign. It involved all types of weapons, ships, aircraft, and Wheel/tracked things. Looking forward to seeing some great builds, and there’s a great opportunity to have some fun with weathering, as the environment was not kind to equipment or people. Here’s to a fun campaign!

My first entry will be Tamiya’s F4F-4, with some extras. 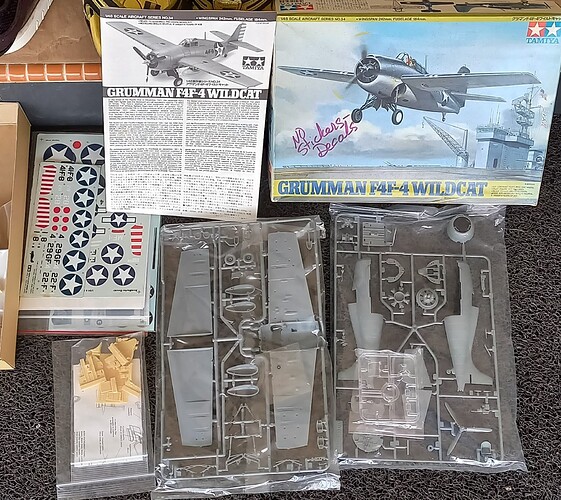 Also, we don’t have a ribbon design at present, and this is something I’m not equipped to do. So any help here would be greatly appreciated. Additionally, I big shout out to SSGToms for making the campaign active for us!