The downside of Ranges

Although converting rounds to empty cases is always fun … 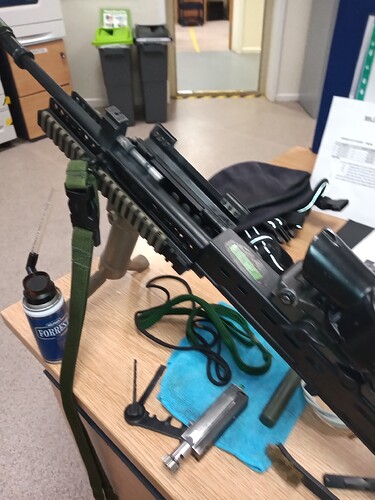 Damn that annoying carbon clean up …

Let alone picking up all the brass! Whilst I (nearly) always enjoyed a day on the ranges - more so with the SA 80 than the SLR - it was never made easy. First there was the 0-Christ o’ clock start, or at least the queue for the Armoury, only to have to wait around for an hour or so for the Armourer (often a cantankerous civilian) to turn up. Then the journey on some 4 tonner sans any seats. Coupled with some range staff who clearly relished the opportunity to make life difficult for the Corps/Div/Bde HQ staff (take your pick of formation HQ). Then followed the hassle if you were unlucky, with an equally unhelpful Range Warden (civilian) who either hadn’t done his job in preparing the range and installing the targets, or was also late. Then the dividing up of those destined for the Butt Party; the distribution of ammo and then a series of complicated exposures which one was expected to remember; something like “At the first exposure 9 rounds” or whatever, followed by “A further exposure of 5 rounds during which you will require a magazine change” or similar, so one’s magazines had totally unrealistic quantities of ammo in them. Jeez, surely just give us full mags and let us judge what changes were needed following the exposures. Trying to remember all this, when you can hardly hear the orders (due to ear protection) all made for a less than enjoyable experience. This was, admittedly, way back when, but it all seemed calculated to sustain failure!

Then the “Dress forward and inspect targets” when one discovered that you were, literally wide of the mark; attempts to alter the zero followed but in my experience, when firing the powerful SLR it never seemed to make much difference (my 9 and a half stone hardly provided a stable platform!). I usually managed to scrape through but almost I feel in spite of, not because of.

Don’t forget the range stew at lunchtime; smelt delicious and promised much, but often fell short, sadly consisting of fat and gristle. Mmm. Lovely - not.

I’d almost forgotten the respirator shoots; guaranteed to get you firing on the wrong target.

And of course, the inevitable pasting up - assuming you’d managed to hit the bloody thing.

Things changed once the SA 80 came in; hardly any recoil and even with an iron sight (we were clearly second-class citizens) a lot easier to fire and even hit the target. During my second bite at the military ie my TA career, upon joining an Infantry battalion, I was issued with, oh joy oh joy, an optic sight; there was no holding me back then - marksman beckoned, and for some reason the overly-complicated shoots seemed to have disappeared, along with the miserable range staff; all the Infantrymen running the ranges wanted you to do well.

I must just add that for most of my Regular career my personal weapon was the 9mm SMG - the weapon of choice so it seemed for HQ staff; it was of course very light, folded down to quite a small weapon, but seemed to catch on just about everything, especially cam nets. However, it was easy to fire, and being a shorter-ranged weapon the tests were much easier. It was also great fun on fully automatic, which on occasion, some more amenable range staff would permit.

Which distances did you shoot at?

I miss those days….the good and bad of the range.

With the SA 80, being a much shorter ranged weapon I think we probably started and even stayed at 300m, but to be honest I just can’t remember; perhaps John will pipe up being smack up to date. With the 9mm SMG I think we started at 200m, which was pretty optimistic then ended up around the 50m or even 25mpoint.

I have to say that these days my poor old brain just can’t quite recall what was what, except that I can still hear the “Bam!” and the sort of “Ka-ting” of the SLR, and feel the sheer blast of the rounds. I also recall the general feeling of satisfaction at the end of the day; the smell of cordite and carbon gunk on the weapon, the smell of the oil and the battering my delicate clerical fingers had taken, with broken nails and torn skin!

I must add that these tests were not necessarily taken in isolation; at least twice a year we had to carry out what was then part of the Fitness For Role (FFR) test of the unit. This involved a 10-mile bash carrying full CEFO (Complete Equipment Fighting Order), wearing a steel helmet and carrying your personal weapon. At the end of the 10 miler (with smoking feet) one had to jump a 4 foot-wide ditch, climb over a 6 foot wall, then undergo the range tests as I’ve described earlier. If you failed at any of this, you had to complete the whole, not just the bit you’d failed at. By God, you felt you were in the Army after that lot!

Our marching test was 30 kilometres,
mine was cut down to 25 km due to the roads/paths being covered with 5 to 8 inches of snow.

I sometimes wonder how the hell we did it all?! We were young I suppose, but it wasn’t for the faint-hearted!

SLR effective range was out to 600m, battle range was 300m and on ranges you could go down to 50m depending which shoot you were doing.

SMG was effective up to 200m, in reality, if you could hit anything at 100m you were very good; beyond that just very lucky lol, and if you’re being shot at and you’re at 200m, you could probably catch the round as it came towards to you.

SA 80 L85A2/3 is Battle range up to 300m and Section effective fire is out to 600m (effective fire is when your rounds are falling in very close proximity to the enemy causing them to go to cover)
normal range work for the SA80 is 300m down to 3m again depending on the shoot you’re doing.

Thanks, 500 m is very far away when trying to hit a man sized target.
The last time I shot anything heavier than a pistol it was the Swedish AK 5 (I was doing repeat training as reserve police, would get activated to guard important objects in a crisis less than full war and effectively soldiers in a war. The Ak 5 or Automatkarbin 5 (“automatic carbine 5”, “automatic carbine” being the Swedish term for assault rifle)[2][3] is the Swedish version of the FN FNC assault rifle with certain modifications, mostly to adapt the weapon to the partially subarctic Swedish climate. The Ak 5 is the service rifle of the Swedish Armed Forces.)
Anyhow, the police figured that they would most likely be using the AK 5 if the fecal matter hit the rotary air circulator so we got to train a day with it. I think we shot at 50 meters or slightly over.
After the first series of three (3) rounds the police officer running the show remarked that my rifle must be slightly off since all three rounds were low on the soldier target figure. Two or three inches below the point where the trouser legs meet.
I answered, with an emotionless face,that I aimed below the lower edge of a potential bullet proof west and the femoral arteries are also a good target area 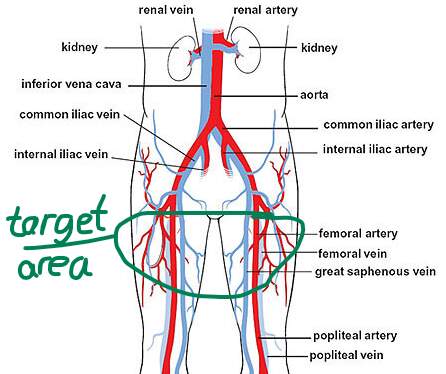 He paled a little and walked away. The head is a smaller target and precludes the use of an open casket at the funeral, so upper thighs it is …

To be honest anything plus of 300m is a bonus, once you get to that range and even more so if any wind aim off is required you are looking at effective suppression fire and not kill shots. A kill shot is a bonus, and that with an optic sight. Our role is geared towards CQA engagements so a lot of our shoots are 100m and less down to 3m

Once you’re in a Swedish forest everything is close range.
Open fields are for tanks, artillery, mortars and maybe machine guns.

One time during a night exercise I, the other company quartermaster, our cooks and the supply group acted as enemy force and (no night vision devices for simple infantry back in 1985)
I sneaked up close enough to one of the guys we were attacking that I could have touched his boots
without him realising that I was there.
The closest eye-safe range for the K-pist 45B blank firing device is 5 meters
so I had to wait for them to move off a bit before opening fire.

Ah yes, I remember the range days. Mostly good tomes. Really used get a good laugh when some one in the lane next to me hit my targets on the rifle or pistol range lol. 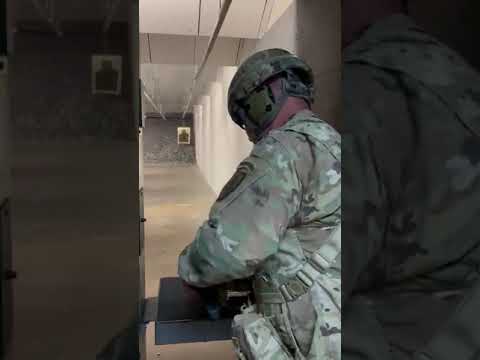 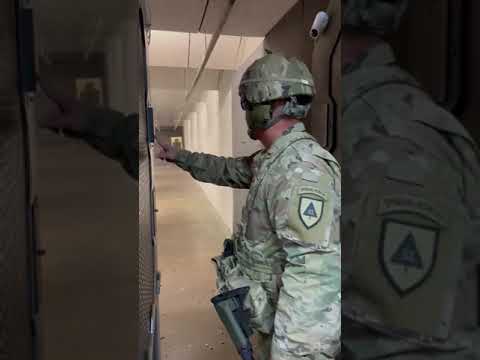 If you’re the guy next to me who brought his girlfriend to the range, then yes.

Did see on occasion Pvt Schmuckitally complain about hitting targets at that range with their M-16 to the Range officials who after reviewing their range book and slight adjustment for windage and distance hit the same target center mass with their weapon in the standing position. Pvt shuts up after that.

Pulling targets with a hungover really sucks. We didn’t have fancy machines. Just two Marines pushing them up and down. Then attaching those hit circles.

Wow……If I remember correctly I think our furthest targets on the m16 pop up range was 350 meters in the Army, that was back in the late 90s.

Yeah, I don’t miss the cleaning but that usually meant we got to shoot live rounds vs blanks and the bfa adapter. Those cleanings where worse. Most excellent time to misplace the ammo or give it to the new troops.

At 25m from the Prone,kneeling & standing I expect my guys to achieve about 5 round 30mm group size or less but the allowed variation is between 60 to 75mm.
To actually zero at 25m expect an average of about 15 to 25mm from the Prone.