Those Big Big Trucks, Such As The M54

What sort of cargo did they typically carry? I’m talking regular cargo trucks.

They carried troops too, along with everything else. Add ammo (small arms, mortars, artillery, etc.) to the list too.

pretty much anything that will fit in the back. Often seriously overloaded; I might add. I’ve seen five ton trucks with 300 rounds of 155 projo’s in the back. Talk about a lowering job! I’ve put five pallets of beer in the back many times. We usually shot ammo out of the back of a five ton on H&I nights, and that was 300+ rounds. The powder was brought out in another truck, and simply pushed out to the ground. (actually two truck loads for powder alone). The folks that made the First Sargent’s list would fill the back of a five ton up with sand bags that went as high as the wind shield every day. You use the truck till it won’t go no more, then they have to get a new one. I actually only saw two M54’s CBL’d in my 15 months. It was that much over built. We used the winch a lot more than you’d expect, and at times it was a life saver. On the other hand we had two M35’s, and hated them!

Our trucks lost the seats early on (before I got there). The racks and rails were in pretty bad shape, but mechanically they were just fine. I’ve seen five tons that looked like they were rolled down a mountain side, but ran just fine. Stateside trucks had the automatic transmission, but all in combat were strait sticks. Ours were locked into full time six wheel drive; with the governor removed. No tarps or even a top over the cab. At the end of 24 months; they were pretty ratty looking, but ran good.
gary

Thanks. I am reminded of an old Beetle Bailey cartoon where the general sees Sergeant Snorkel have his men walk out a truck and even after they leave it they are still packed together like sardines, 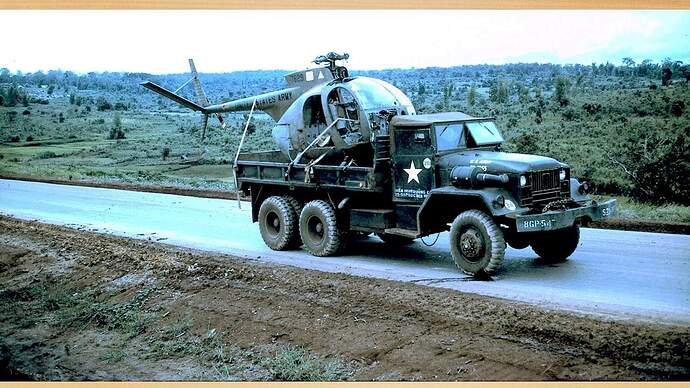 note the sag on the rear tires! Five tons just don’t sag unless you have a flat tire
gary

I know the truck is associated with Vietnam, but it has been produced in the 1950’s, and wondered when each version came out-I haven’t found that information. I have two big ideas as to what to do with such a truck.

I thought of a scenario where Gomer Pyle gets squished by one such truck, knowing how US military people hate that show. Then again, I wonder if they might find that idea to be too much.

every now and then I run across somebody using one on a farm or even construction. Last winter I ran across one that was painted hot pink! Several fire departments using them as a work aid out in the country
gary

The M54 truck is most associated with Armor and Arty units, but others used them as well. Supply units used them a lot on convoys down south. A convoy up north was not all that common, but they did run a few. Infantry pretty much used the M35 truck in one form or another.
An Arty unit couldn’t survive with out them just for towing a howitzer alone. We did move a gun inside the perimeter with an M35 a few times, but never on the roads. The ammo sections couldn’t have survived long without the five ton truck. Out past the wire the five ton was the undisputed king of the road. Nothing would catch a fine ton with the OEM governor removed, and that was the place where speed often meant living. Other folks disagreed on this, but hey never went far on the road. We typically went 70 to 75mph when the speed limit was 20mph. The idea was to have the mine go off under the rear wheels, and makes it really hard to get shot unless the guy is right beside you. In an armor unit, the truck was capable of hauling a new set of tracks for an M48 tank!
gary

I used to watch that show growing up and liked it a lot, very funny lol. I got even more of a laugh out it when I came home from basic training/AIT in ‘85. One episode that comes to mind from a modeling standpoint is the one where Pyle gets a few hippies to paint a truck (or trailer?? I forget) for him; that could make a great diorama if done right

Yes I see a bunch here on Long Island used by some of the volunteer fire departments in various roles. Some are called “brush trucks” I think. They able to get into wooded areas pretty easy where the other fire trucks can’t.

there’s a lot more to that than meets the eye. Sometimes you got to let them blow off steam to just get back to the real things in life. Now we never did anything that crazy, but trust me we did it three or four times a year. Back in the rear, they’d go to the beach. There wasn’t any beaches or oceans out west. Still we made do. How about a naked conga line running thru the company area? Randy nailing the doors shut on the E5 and above outhouse! (may have been one of the very best) The great rat incident was probably the all time prank, and they are still talking about it. I can still hear Randy telling me that we’re going to jail over this one. Everytime something like the happened, the Colonel just smiled and went on. The Sargent Major was another story! Even then he never acted on any of them. They both were good men, and had your back when things looked real bad.

You do stupid stuff to get away from what’s going on. Otherwise you live your life in fear. A scared kid is useless. Still you gotta know when enough is enough. My First Sargent and I used to fight like cats & dogs, but he knew knew I’d follow him strait into Hades locked and loaded. We got into a brawl out on the tarmac in Chu Lai over whether or not I was going to get on a C130. There was a Marine that came up and offered to get the MP’s, and Top told him he’d handle this his own way. I said I’m going to bust your head before I ever get on that plane! After about ten minutes we had an audience (Top was almost a hundred pounds heavier and stood six foot six). Just like that all the time, but he knew I was scared stiff of C130’s. I flew out on a DC-3! (a whole story on that one sometime) When I got back he was laughing about it, and I was scared to death from a C123 flight. Had we the paint, I’m sure we’d have painted a howitzer in pink with polka dots!
gary

Wow, the first positive review I heard of that show from a military person! Everybody I knew who served in Vietnam, however, disliked Gomer Pyle.

I only like it because I thought it was funny but I was a kid at the time lol.

you gotta learn to just let it go. I suppose that if I were a Marine; I’d be the sameway.
glt