Under full armour - Challenger 3 with TES

This build will represent the to be aquired new Challenger 3 from the british army Life enhancement program together with the Theater Entry Standart (TES) Chobham and Dorchester Level 2 ERA additional armor package and rear bar armor. This is the earmarket equipment for a “hot conflict” to provide the highest level of protection for the Main battle tank and its crew. 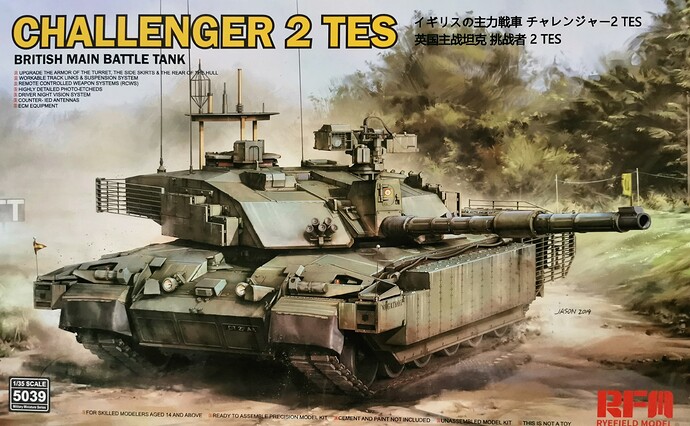 a crew from Miniart´s set 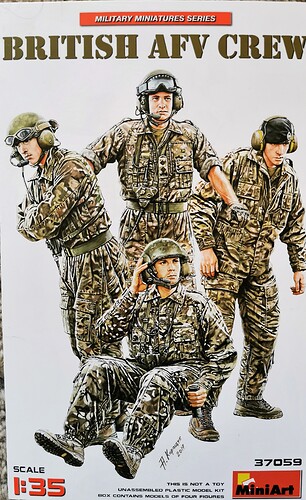 and, most importantly, the brandnew Challenger 2 LEP upgrade set from Scottcast which just arrived one hour before at my door. The box looks very unsuspicious, therefore I will show you the very crisp resin parts

These are the instructions provided in Scottcast´s upgrade set: 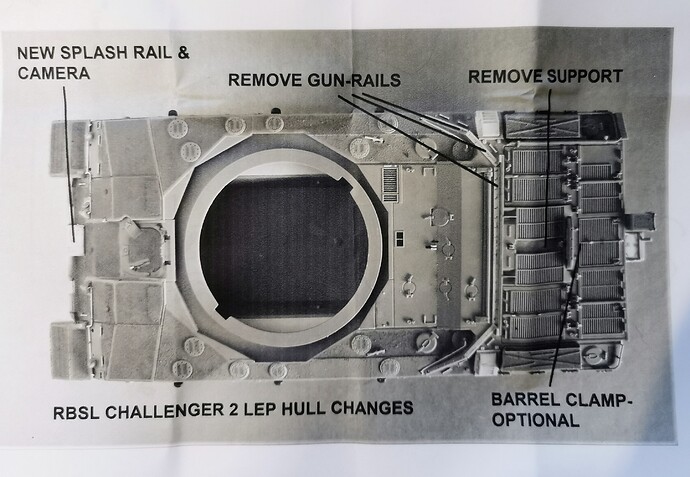 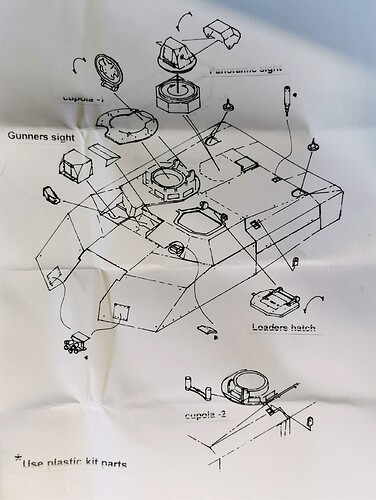 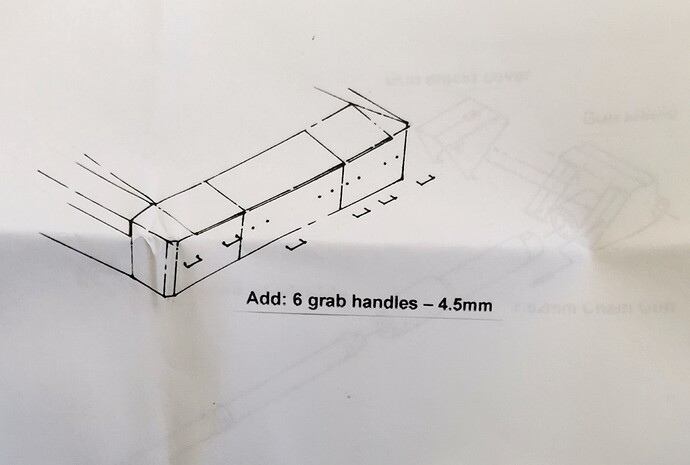 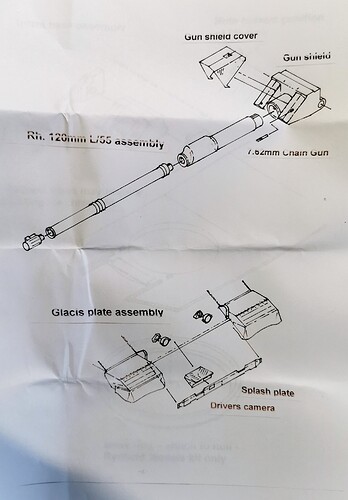 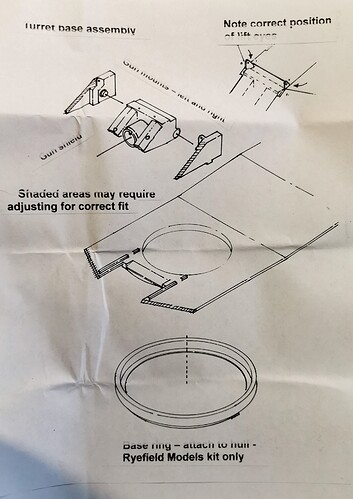 So let the games begin

I’ll be following this with great interest!

Nice! I´m going to use RFM Challenger 2 with the Scottcast´s turret! The turret is on its way, should arrive within the next couple of days.

@Spearhead01: I believe I ordered the last one available at the moment from them so we are both one of a few lucky guys to own these now at the moment

Do you also plan a build here? Would be nice to see your interpretation of the Challenger 3

@Black_sheep I build so painfully slowly so I do not know if it would contribute so much? I manage to build 3-5 models per year, maximum.

Nice to see a build log of this new tank.

Looking at this reminds me a lot of an old Cromwell kit I had, the instructions, the box, Scotland. Great looking conversion, too.

Welcome aboard all, I am glad there is interest in my build

I started with the crew first as I had to wait for the turret to arrive. Miniart´s crewmen are of good quality though I find the helmets a tad too big but this is in the eye of the beholder 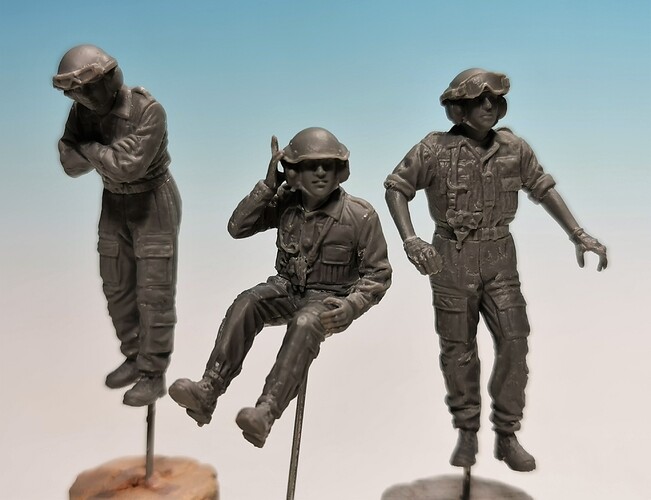 The kit I started according to the manual with the lower hull. It went together without any problems. Detail is crisp with minimal flash. 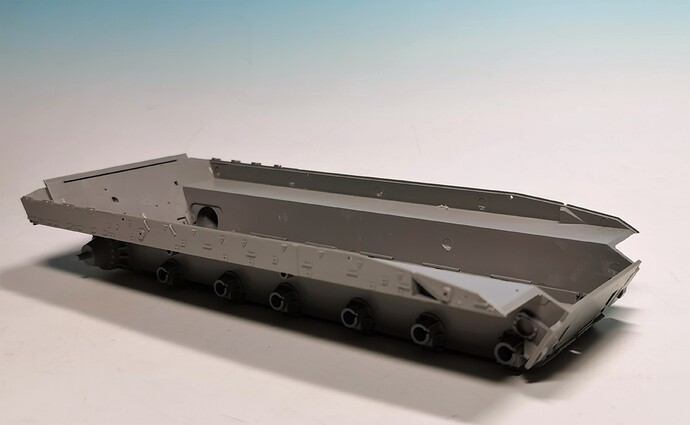 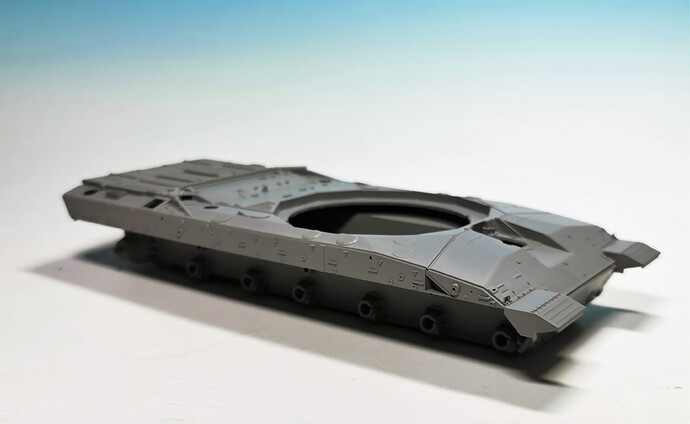 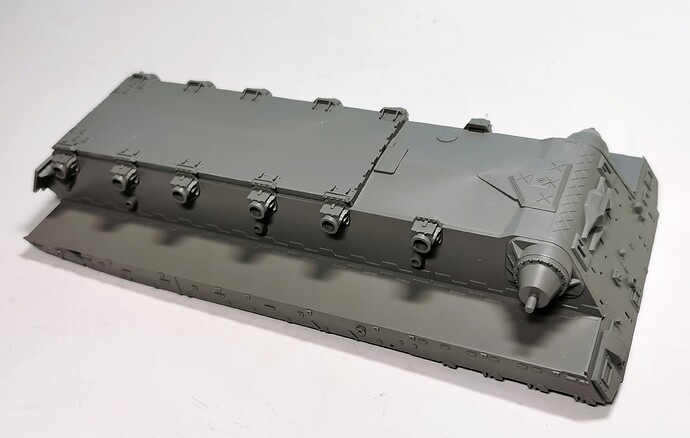 Now the first surgery starts here with the upper hull. There are the rubber gun rails and one barrel support to be removed for Challenger 3 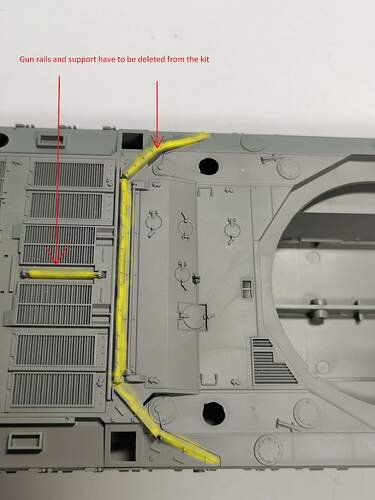 Support at the engine deck and the rubber gun rails removed. Added at the outsides two flatbars with evergreen and made the drillholes 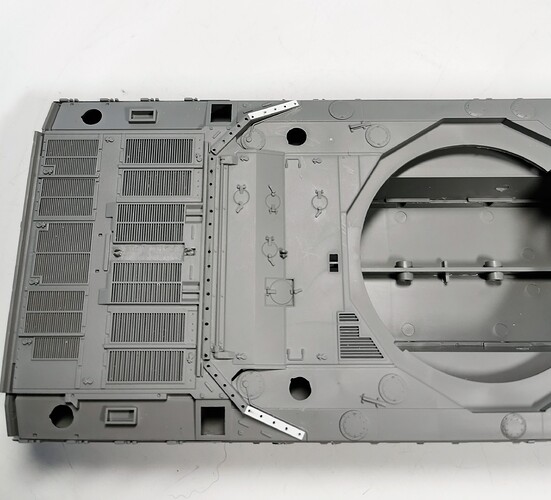 Take note that the Challenger 3 is not having the drivers camera. 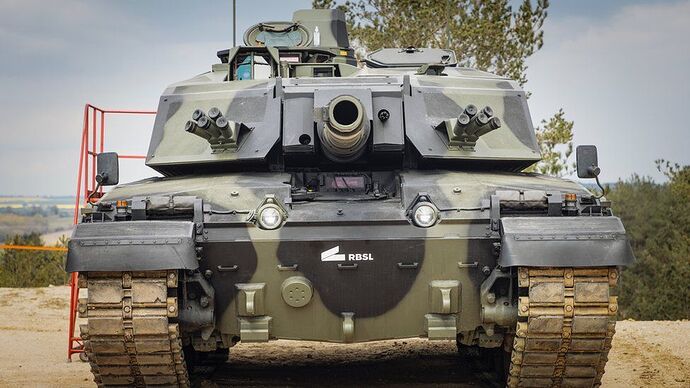 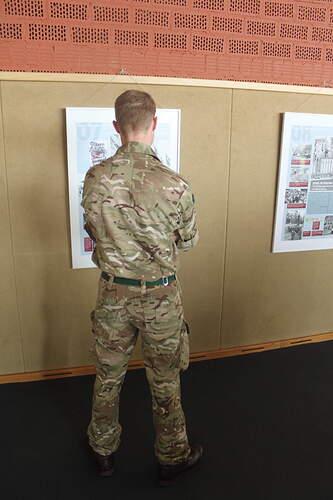 @Hermann: Thank you for the images

. Well I also see no camera at the real vehicle but it looks like a small connecting point at the area where a camera would sit on. Scottcast asked for a drivers camera and provided one in resin. Hmmm… need to think about later what to do

The Multi Terrain Pattern uniform will be tricky indeed. But I did successfully woodland camouflage uniforms before so it should be doable. Any hints which Vallejo colors would be appropriate? Miniart´s color advices here are completely bogus. 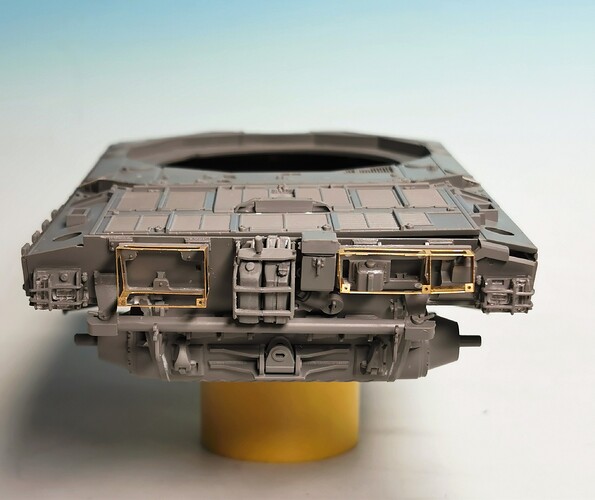 after this the whole suspension parts were made. Almost all parts have flash, not too much but enough for making it necessary to clean up 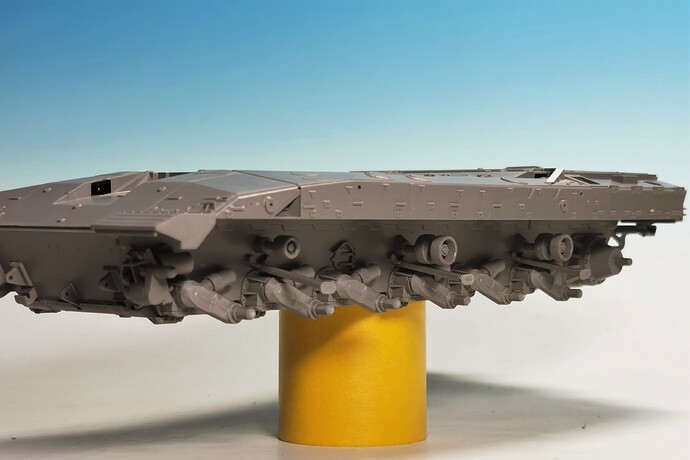 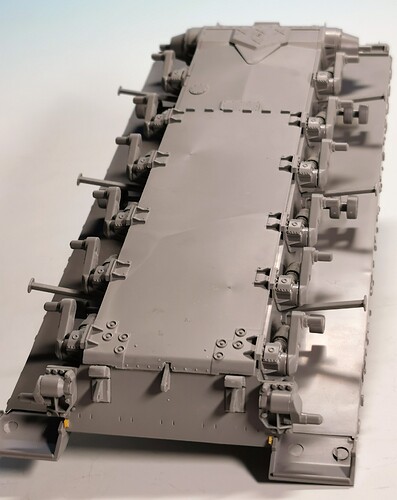 and in the end before quitting time the workers managed to install all running wheels and idler sprokets. Looking slowly now like a Chally eh?

Hi Thomas,
take note that the Scotcast kit is the prototype called LEP. The first CH3 will be fielded later. As for MTP I try to tackle the pattern with Tamiya colors. For me the hardest color is the light green, since I try to get an out-of-the jar solution.

Thomas, I have messaged you some images of my MTP uniform ok.

I love the way the Challenger looks - it’s sleek in ways that the Abrams and Sov/Russian tanks aren’t.

@Hermann: You are right, Scottcast´s turret is the Challenger 2 LEP. As my TES will only be added during a hot conflict I assume the driver´s camera will be added also

@John: Thank you again for the pics, will be very usefull when its coming to paint the crew later

Some new progress here: I was able to finish up the complete hull together with its TES armor. Everything is just fixed with PATAFIX to be able to disassemble everything later more easily for a better painting of the single components.

I opted for installing the drivers camera at the uparmored frontal glacis plate panel. At the plain Challenger 3 which was introduced to the public there is no camera but I assume one will be installed together with TES within a hot conflict 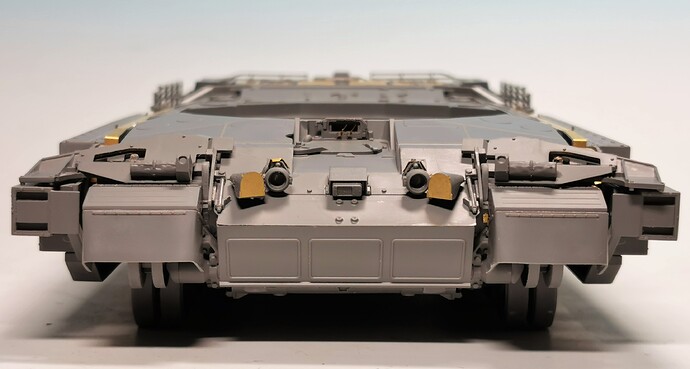 In the top view the vehicle looks like a giant turtle with all the reactive armor blocks around it. Rye Field provided etched grilles for the forward engine louvres only but not for the aft. Don´t know if this is correct or not?! 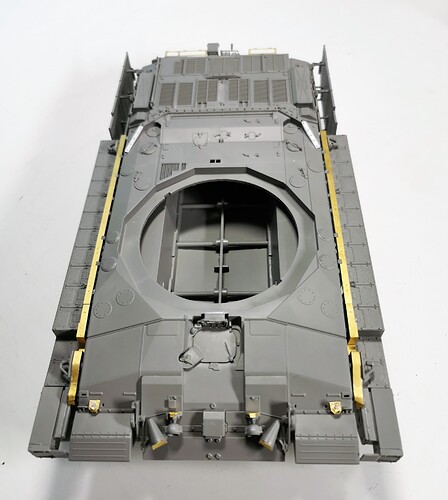 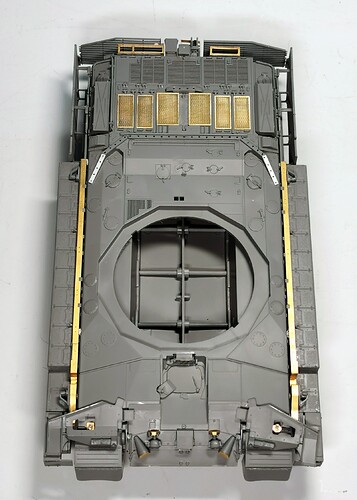 Looks very menacing to me already 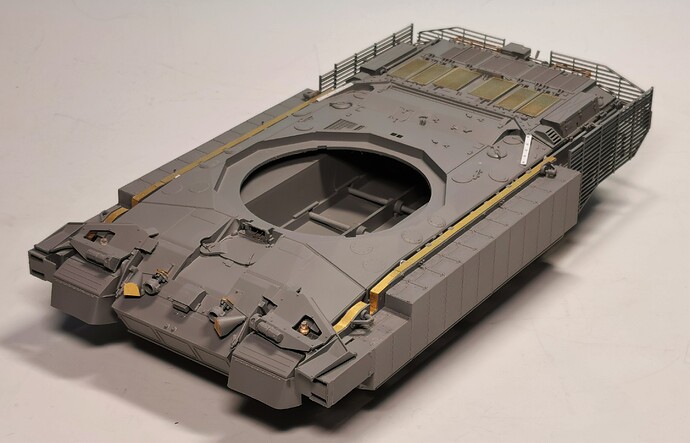