While researching my M3 Bradley build I found this picture of a crewmember using what appears to be a sight from a M47 dragon missile louncher. 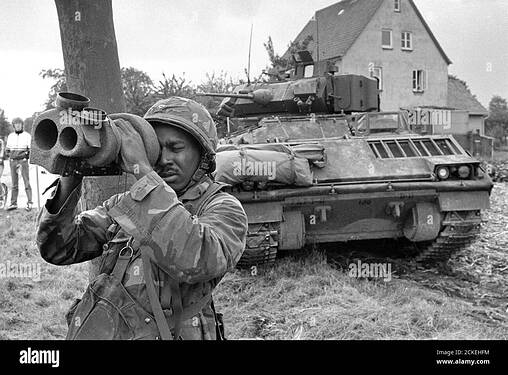 bild1300×958 186 KB
Was this common practise, and why? Was it lack of binoculars or is it usable for measuring distances? It is a interesting picture and it would make a nice detail in a diorama or vignette.
Stikpusher August 17, 2022, 8:20pm #2

It’s probably a field expedient use as improvised binoculars. I seem to remember only platoon leaders having a set of binos in the field. They were serialized “sensitive items” and had to be accounted for daily when in the field (along with weapons, pro masks, NVGs, commo gear). Damage or loss of a set of binos was a big deal, so they were not issued to every squad. As far as measuring distances or sizes would go, the Dragon sight only had cross hairs for the aiming point, and a set of stadia lines to determine if a T-55 sized tank was within range. If the tank completely filled the lines it was within engagement range. If it was too small to fill the lines, it was not in range.

I just wonder if this is a case of Anti Tank assets aiding the Battlegroup Surveillance & Target Acqusiion Plan (STAP) by maximisning the use of their sights? We certainly used to do this in the British Army when MILAN and its excellent sighting system (possibly MIRA?) came into service; it was recognised that by using the sights extra information could be assessed and added to part of the overall G2 picture.

I hasten to add I’m no Infantryman trained on MILAN but I do remember marking up (at Brigade HQ level) what was then called the STAP overlay, and this depicted all the sights’ arcs of whatever weapons systems we then had (c.mid-80s).

We didn’t really use MILAN like that. The big Boss at Div Or Bde would filter his intent down to Regt Cols and where he thought MTT would likely appear by either route denial like minefields, arty barrage, obstacles and funnel it into a kill zone. That would have Arty fire missions on call and then that would be broken down further by long ATGW, tank on tank fire , MILAN and then if you were really unlucky, 84mm lol…
When the Regt or battalion deploys to its fire position ( remember we were a defensive line back then and not geared for offensive) the Col will have a set arc he has to control, that will then filter down into things like the MILAN Pl, who will either form a Pl defense position on the MTT or possibly split into the front dug in Inf position or as flank protection. the MILAN Pl Comd will have arcs given to him he has to cover, he will then position every Milan post and identify the Arcs to the firer. Pretty much the same for Tanks except we had more fluid arcs as we could jockey between various positions as needed but we still had generalised Arcs to observe … Striker was pretty much the same except we would be overwatch usually for the CVRT troops out as the forward recce screen.
The MILAN once it was sited was pretty much just used to observe, as the sight unit is pretty chunky and never used as a sighting aid like the bloke above, there’s no real range identifier in the sight, just your aiming marks… Tank Comds as well as the gunners main sight, would have his own sight, and then TOGs and each TC had a pair of binos either issued or we had a personal set purchased as a spare and the loader would use them as at times, you just have to get your head out the cupola to observe the ground.
Then it comes down to SUSATs and other sights to observe your front and await the (then) Red horde…

Yes I recall that as well Stik; I thought it was strange how I never saw anyone use them except the PL and not often at that but they were a sensitive item and had to be accounted for each day. Couldn’t understand why squad leaders didn’t have them. Weird.
There was also a night sight for the Dragon as well; it was bigger and heavier of course and both were extremely expensive ! I had signed for the whole company’s worth as a unit armorer in Germany and I never let anyone touch them unless we had them on the range. And that was an extreme rarity if I recall.

The funny thing is, the Bradley behind them has far superior optics. I don’t know the main gun optics, but the TOW sight is a superior system. Much longer ranged, and also thermal sights for day and night. That photo was very much likely a spur of the moment thing with the dismount squad using the Dragon sight.

No, in very simple terms, the soldier in the picture is using the sights as a set of binoculars because in all likelihood, he doesn’t have any himself.

The funny thing is, the Bradley behind them has far superior optics

Army, be the best that you can be…

Photo is staged in my opinion.

Thanks for your answers gentlemen, always nice to get first hand info.
There is a second photo of the scenen. it is also quite interesting. First the guy with this big bag on his back. I guess the carrier bag for the dragon sight? A guy in the front with a tank helmet and a M203 mounted on his M16 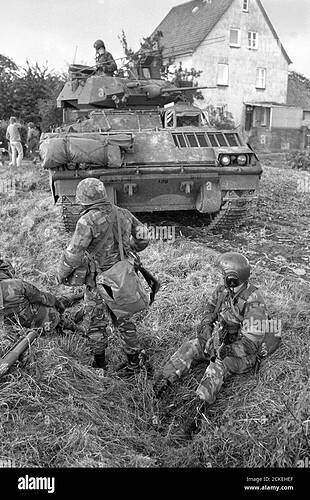 bild864×1390 242 KB
He is also wearing his Alice web gear, In Sweden you sometimes see the squad leader in a tank helmet. I guess because he then can hook up with the vehicles radios and maybe it is more confy. Was that practice in the US Army as well, or is it a crew man dismounted from the Bradley givning heavy support with his gun? I didn’t know that vehicle crews had M203s.
Also there is a cold weather protection for the driver I never seen on a Bradley before, only on M113’s. Were these screens interchangeable between different vehicles?
golikell August 18, 2022, 8:05am #10

Most interesting are te kids playing in the back ground

66mm on the ground In front of them , last resort

Which has been deployed, the tube is extended.

I used to find it a bit surreal that we’d be in the middle of a forrest, dug in, in full NBC kit, facing some notional eneemy force and some random German would come along walking his dog and wave…

I can imagine that… The said kids seem oblivious to the presence of the military… They must have become so used to it. The soldiers on the other hand, seem to be distracted by them…

There is a second photo of the scenen. it is also quite interesting. First the guy with this big bag on his back. I guess the carrier bag for the dragon sight? A guy in the front with a tank helmet and a M203 mounted on his M16

Yes, that looks like the sight bag for carrying the sight. A M16/M203 combo is standard in every infantry fire team (two fire teams per squad), along with a M249 SAW or M16A1 rifleman designated to fire full auto before the SAW was fielded. When I was a driver on TOW tracks, the driver was assigned a M16/M203.

The said kids seem oblivious to the presence of the military… They must have become so used to it.

The kids are watching them in the first photo.

The kids are watching them in the first photo.

Yes you are right. I was only looking at the second picture.

When I was a driver on TOW tracks, the driver was assigned a M16/M203.

So it could be the driver sittning in the ditch?
I thougt the driver were supposed to … drive.

There’s quite a bit of sitting around on exercise. Only the driver, gunner and commander would have CVC tank helmets. Driving around Germany in an armored vehicle is somewhat surreal but the Germans didn’t seem to care unless there was an accident. If you were some lucky then someone would run off and get some fresh brotchen and cokes. The kids would sometimes show up to trade stuff. Looks like 2/41 Inf 2nd Armored Division out of Ft. Hood, TX.

Searching for the photos gives this caption,

It was most likely REFORGER '84.

It was most likely REFORGER '84.

It wasnt REFORGER 84/Certain Fury. 2nd AD wasn’t part of that exercise. I was on that one with 5th ID

But 2nd AD were part of REFORGER 84/Lionheart, so that is likely the source of the photos.

Driving around Germany in an armored vehicle is somewhat surreal but the Germans didn’t seem to care unless there was an accident. If you were some lucky then someone would run off and get some fresh brotchen and cokes. The kids would sometimes show up to trade stuff.

I remember being watched by old guys and getting the feeling that they were comparing us to their days in the war by their looks. And yes, we use to trade rations to the German kids for sodas and other foods.