OK, so this is a bit of a strange request, even for me and i’m not sure of the best way to phrase this…so here goes:

I have a friend called Mike who is slowly writing a book which is sort of about the battle of Dak To (Hill 875) and one of the guys that was listed as an MIA there after the battle and it is also about the modern day we live in.

the basic idea is that an old PRC 25 (yeah i know the slang term that was used but it’s a family site so i am not using it here) comes into a shop, say an army surplus store. now this radio has been dead and dormant for many years but it suddenly comes back to life and the people in this time 2022 can communicate with the troops who were in Vietnam during the war in 1967.

so what i am looking for in the way of help is 2 things;

First, the kind or radio traffic, language and other terms that would have been used back in 1967 during the Vietnam war, particularly used on a PRC-25 radio, callsigns etc.

Now i have ordered some books on the battle of Dak to but with the mail system flowing as fast as mud at the moment i thought i’d put a shout out here.

Gary, this one might be right up your street, i hope but all help is welcome.

There are a number of YouTube videos that have recorded tactical radio chatter from the Vietnam War. There are also a number of free or inexpensive programs that can be used to download and convert the video sound into MP3 (or other audio files).

The phonetic alphabet that would have been in use can be found on Wikipedia (along with the WWII version for anyone interested in that).

Radio callsigns would have been constantly changing on a daily basis for most units according the Signal Operating Instructions (SOI) / Communications-Electronics Operations Instructions (CEOI) in effect at any given time.

You can find an SOI/CEOI sample here:

In use, most callsigns were abbreviated so that only the last letter was used along with the expander digits. Although the callsigns in this sample are “modern,” a Vietnam War SOI would have looked essentially identical (just with different ramdomized, letter-digit-letter callsigns. The entire purpose is to not have any sort of predictable pattern.

Here’s an example of expanders or suffixs that could be used on the end of any particular radio call sign to indicate the speaker’s position and function within the call sign’s unit: 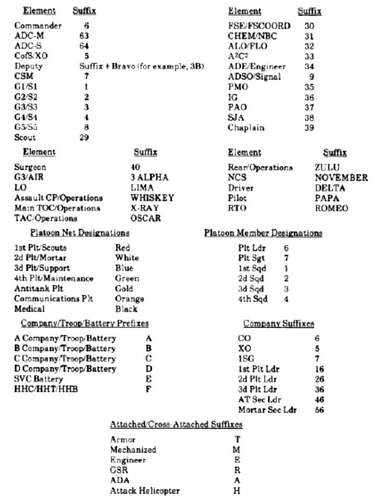 (I stuck this in since it took a bit of interweb digging to find it. I knew what I was looking for, but it might have been a bit more difficult for someone else to spot.)

Additionally, there are “prowords” that are commonly used to shorten and clarify messages. A quick Google search of the term “radio proword” will turn up lists of the ones used in the US military. These have not changed much since WWII and hardly at all since Vietnam.

I don’t know what exactly your friend is planning, but I’m in the process right now of restoring a WWII SCR-610 radio set. I’ve installed a small MP3 player in it with recorded WWII tactical radio chatter mixed with a couple of period “moral” songs. No need to go into details here, but when one of the operating knobs on the front is turned, the MP3 player switches on and the recorded tactical chatter and music plays out of the radio speaker (along with animating the signal strength meter on the front panel). Makes for an interesting display in my collection.

You can try DoD Historical Archives, I didn’t have time to go through their different sites but here’s one link :
DIMOC- Archives
or another:
Historical Office of the Office of the Secretary of Defense

Using the excellent information above , you would also have to request permission to enter the net.

Example: You, this is me. Request permission to enter the net. Over.
You would also need to supply an authenticator, also found in the SOI/CEOI.

Other examples of radio chatter:
Read you Lima Charlie. How me, over?
You could substitute Lima Charlie for Lickin’ Chicken.

If reception was not good, and depending upon how well you got along with the chain of command, you might say, You’re coming in broken and stupid, over.

Have your friend visit a VFW or a local chapter of the American Legion. Plenty of dudes happy to regale him with stories of how it was back in the day.

guys thanks so far I have linked this thread to him in an email.

@18bravo my friend Mike is actually in South Korea at the moment and although he is a Vietnam Veteran and was with the 173rd in Vietnam it was in 1970.
He was an M60 gunner and had enough heavy kit to haul around and didn’t have much to do with the radio.

hopefully this is the sort of info that he can use. I will try to call him and see how he is getting on, the nine hour time difference between the UK and South Korea dies make things a little hard at times.

Your friend Mike should at least look over the 173rd Airborne Brigade Association website (if not reach out to them):

I know that we conducted research over the course of 2+ years before we even started to build a 1/72 scale diorama of Fire Support Base (FSB) RIPCORD that was commissioned by our state’s (SC) military museum. Very early on we reached out to the Ripcord Veteran’s Association for assistance with research, and I can say that those guys provided us with tons of useful info along with many, many leads to other sources.

One of the most valuable bits of information that we got from these guys were copies of the official after-action reports and daily SITREPS of the brigade and the 101st ABN DIV. These allowed us to reconstruct the entire friendly order of battle down to the platoon level as well as the timeline of when the many various units occupied FSB RIPCORD.

It’s quite likely that someone in the Skysoldiers Association has already done some of the research on the particular battle and could very likely have copies of the official AARs and SITREPS.

Another resource that you friend might want to turn to is the online map collection held and curated by the University of Texas Library.

They have in their holdings a COMPLETE collection of the DoD DMA 1/50,000 scale maps used during the Vietnam War (correct editions for the actual period). You can download a high-res copy of any of these sheets.

These are invaluable for getting the “ground truth” and facts about the micro-terrain situation correct.

It’s super easy to fall down the research rabbit hole with these sorts of projects.

I humped the Pig myself quite a bit. That never stopped the commo guys from making me carry extra batteries. To be fair, we all did when doing extreme cold weather training. They just didn’t last long in that environment. Ask your friend if he knows Dale Caddick. Dale was in my SF unit. While with the 173rd he went out on two different missions and was the only one to return. On one of them he low crawled back to base - it took him three days. It should be relatively easy to look him up. We’re starting to lose these guys just as we did the WWII vets. A shame…

@SdAufKla @18bravo I have given Mike a link to this thread so he will be able to act on all the info you guys have supplied.

it’s 2am here in the UK so it should be 11am in South Korea so I will give him a call and update him.

I think Mike told me a lot of the records have been destroyed as he did make contact with the 173rd Airbourne people a while back.

Mike and i talked about the the information that you guys have supplied and it has given him some new avenues to explore, some of the DoD stuff is hard to get hold of or talk to anyone there due to Covid restrictions.

he recognised the website where you can get hold of the maps from the government that were used in Vietnam and has told me they charge something like a $1 a time which is ok for a handful but if you’re needing the whole of II corp then it starts to get expensive.

he is also trying to follow up a lead regarding returning Vets to Vietnam: there was a group of 173rd Airbourne guys that went back to Hill 875 and Dak To and he thought it might be possible to do the same thing.

@18bravo with regards to Dale Caddick; it depends when his missions took place, he might also have been known to Mike but by a “Nick Name” only. when was Dale Caddick in Vietnam with the 173rd? Mike was there April 1970 to April 1971. with regards to losing Vets, yeah i hear you on that one, was watching a SOG podcast and i thought wouldn’t be great if they talked with Franklin D Miller, he did 6 tours in Vietnam and was awarded the CMOH. I found out last week through google that he died aged 55 from Cancer in June 2000…damn! his book “Reflections of a Warrior” is well worth reading if you get a chance. Franklin Douglas "Doug" Miller (January 27, 1945–June 30, 2000) was an American and United States Army Special Forces staff sergeant during the Vietnam War who was awarded the United States military's highest decoration—the Medal of Honor—for his actions above and beyond the call of duty on January 5, 1970. He was also awarded a Silver Star, two Bronze Stars, and six Purple Hearts during his six years service in Southeast Asia. A native of Elizabeth City, N.C., Miller eventually retired from the...

You can try DoD Historical Archives, I didn’t have time to go through their different sites but here’s one link :
DIMOC- Archives
or another:
Historical Office of the Office of the Secretary of Defense

@agincajun Terry, that second link is a bit of a mouthful to pronounce, thank god you listed the link here, i have forward it to Mike and he’s gonna hit them up

These maps are all open to the public and free to download:

These are digital copies of the Defense Mapping Agency (DMA) maps produced and used during the Vietnam War. However, this collection is held by the University of Texas Library.

You can also start at this page and navigate to maps that cover pretty much any area of the world. All are, AFAIK, open to the public and free to access and download.

I’ve downloaded many maps from this site.

@SdAufKla Holy cow, that’s a great bit of information, I will phone Mike when I get home from work.

we are in the initial stages of planning a return trip to Vietnam for 2023 and hope to find a good quality guide to take us up to Dak To/Hill 875.