I was just in Diorama forum (as a visitor) and clicked on the Takom King Tiger thread, having noticed it has 198 views. I looked at it, clicked “Dioramas” at top to go back to index & it was still reading 198 views. I repeated this process 10 times but it still read 198. So I logged in to see if that would make it kick over…nope, still reading 198. I tried several other threads but the counter didn’t register any of those views either. I know some views obviously are registering, but it doesn’t seem to be anything like the true number. If it’s relevant I’m using a desktop pc.

I was, in any case, going to mention that between October 22 and 30 I’d kept score of my own thread’s views - Op. Anthropoid had 274 new views on the new site and…2,723 on the old site. Seeing as I left a link for “old” visitors to get directly to the continuing thread on the new site, I can’t believe 9 out of 10 didn’t. Something ain’t right?

The system probably stores a cookie on your pc, or logs your IP address and recognize that you have been viewing the item before and won’t count you again as a new view to keep an honost score.

I just added a test post to check if the view counter only updates when there is something new to view.
I have viewed that topic many times, the counter was reading 198 and had one post I hadn’t seen before, after my visit the counter was at 199.

I would assume that the viewer counter and user activity tracking features are very robust here since “membership levels / trust levels” are largely based on how much and how users patronize the site. This would all appear to be tracked automatically and continuously.

The system software seems to track individual user activity very closely and across a fairly large number of categories. I would think that it has a clear cut and well defined “trip wire” for when to count a new and unique “view” and when to ignore a “repeat view” that is made to simply increase the “hit count.”

At any rate, I should think that the view counter here is very accurate within its own internal criteria.

This forum was built to handle the needs/requests of fairly large enterprise level companies so yes it’s counting only valid ‘unique’ views. There is probably a time limit before a return visit by your browser or client counts as another view. In terms of tracking stuff though this software is pretty amazing. This is the view of the main dashboard for example. Not too shabby. 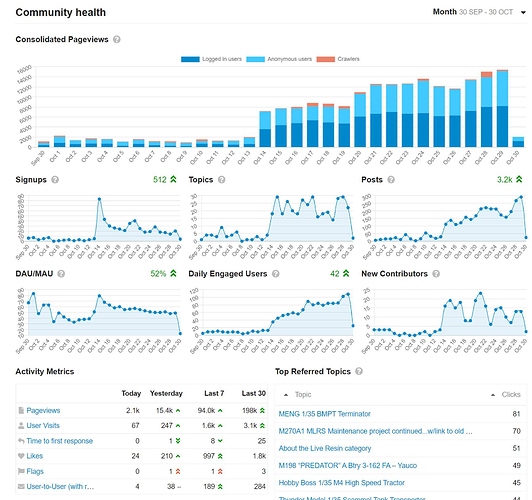 Hmm didn’t realise you can see what I had for breakfast too. Thanks for the heads-up, makes sense counting individuals rather than their actions. So does that also explain the old site’s stats i.e. they counted actions, and not necessarily all by humans? For example a few months ago I logged on to find there were allegedly over 3,000 members also logged in, over the next 20 minutes it climbed to over 4,000. My thread gained over 2,000 views in a couple of hours & others also had a boost seemingly as a percentage of their existing count. I think it was a Monday afternoon in Oz so Europe & Americas should have been mostly asleep. A few hours later I checked again, the views totals stood but log-ins were back to the usual few hundred. Might that have been what the new software calls a Crawler or have I been rumbled?