Just started the Italeri kit for MTB 74. First thing I noticed is that the instructions on the placement of the air intakes/vents is wrong. In the instructions they face outwards, but the original pic I have and Al Ross’s excellent diagram show them facing inwards toward the cockpit. Anyone else noticed anything to watch out for? I will have to widen the position holes to reverse them.

Some pics of the camo scheme so far.: Allied Coastal Forces of WW2 Vol II by John Lambert & Al Ross is an excellent reference for MTBs and US Elcos boats. I borrowed the extra exhaust fixing from another as yet un-built kit!. 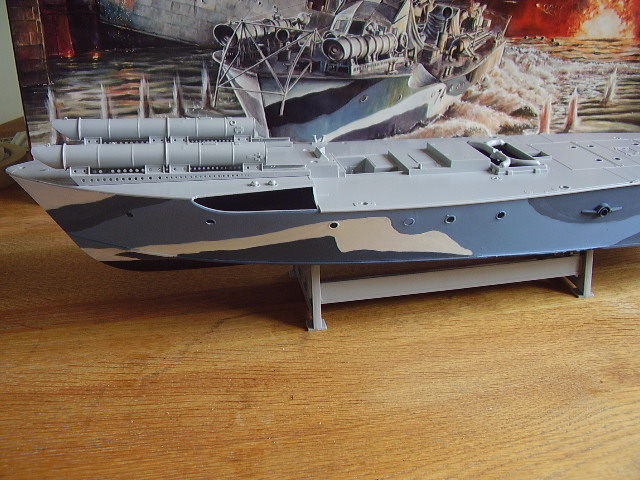 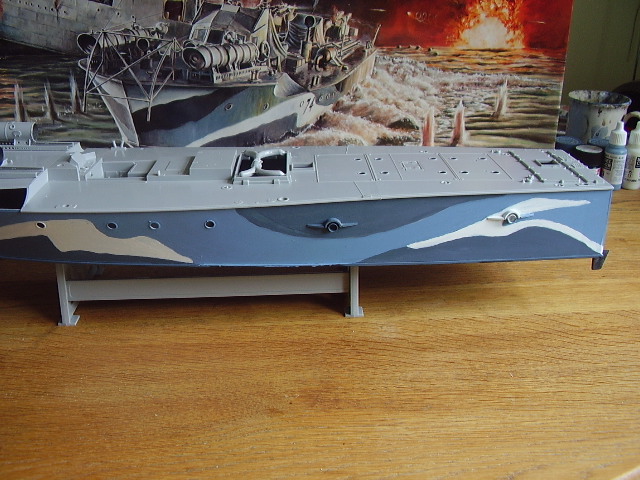 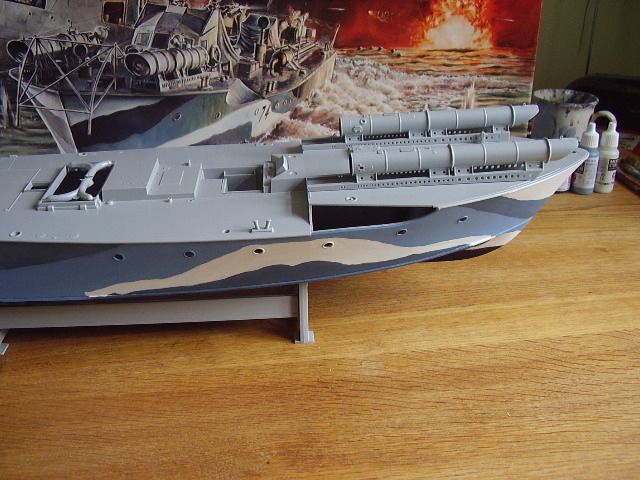 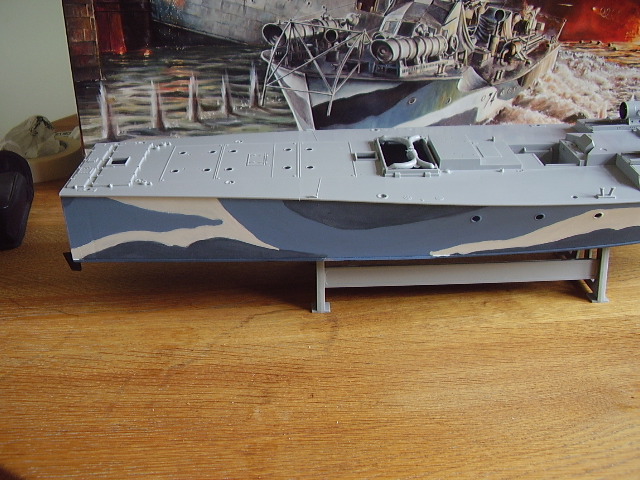 Normally ventilation channels on ships can be swiveled, as to be able to mitigate incomming waves etc…

Thanks for looking in and the comments. Also for the info on the swivel ventilation channels, which makes sense. Progressing slowly.

That is a cool camouflage scheme

Thanks to all for looking in. A little more progress. The biggest issue so far is the seem on the torpedo tubes, still not completely gone, so a longer time of dry fitting and sanding at the start might help. Be careful of part PE20 I bend mine over in the wrong direction and bingo the carpet monster gets another bit. Ended up making two alternatives our of some left over resin parts. (pity).

Working on the deck and fittings, it seemed easier to be able to move the deck around for painting, so nothing much is fixed yet. There are not that many parts to this kit but there is a lot of work. I re-roped the life raft for a better look. Anyway some pics of progress or lack of it. 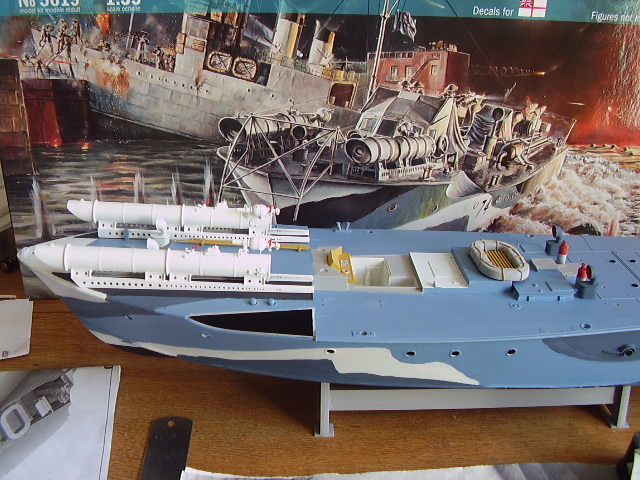 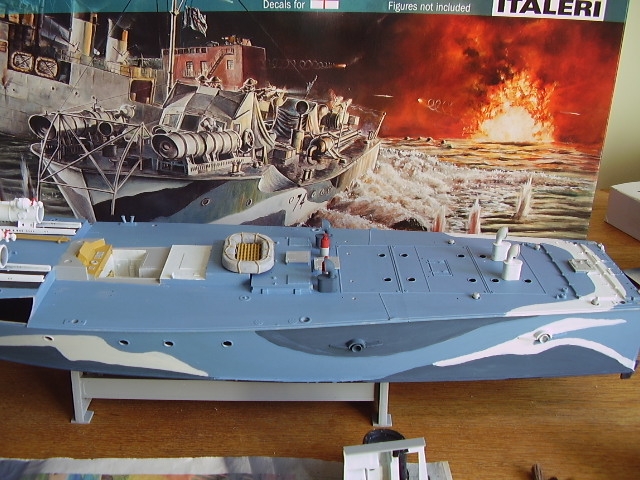 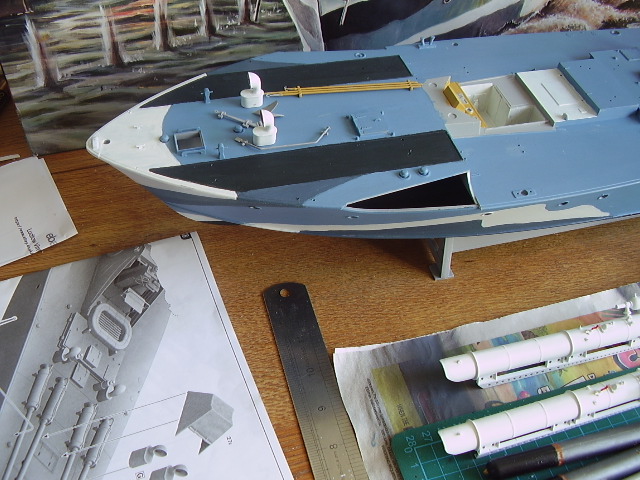 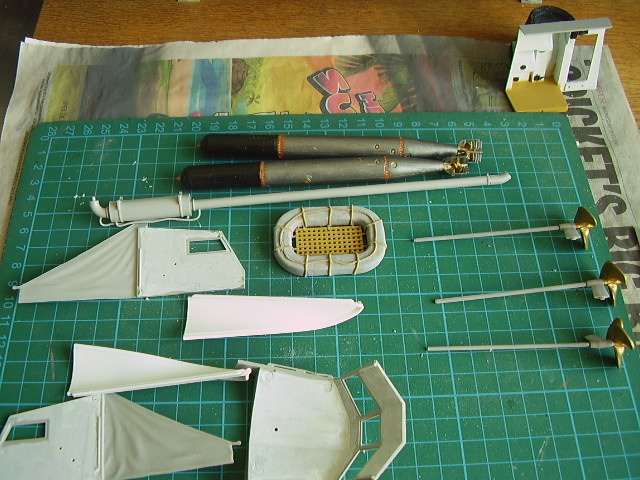 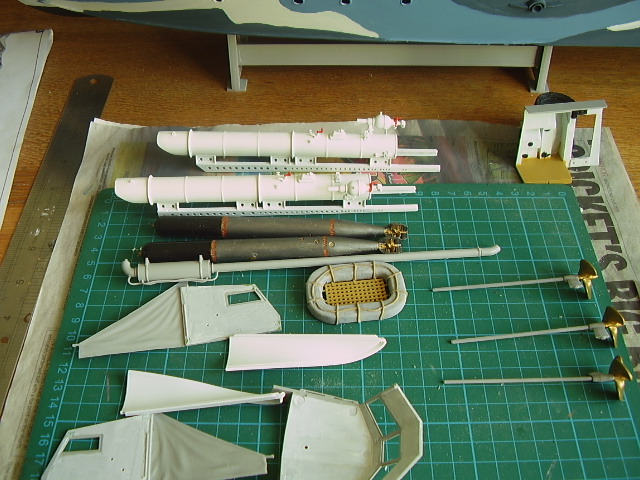 I think this particular paint scheme was unique to MTB 74, the torpedo’s were also designed to be fired at the target, hit it and sink below to be detonated by a delayed action fuse. Originally designed for use to attack ships like the Scharnhorst by firing the torpedo’s of any protective net, when not used for that purpose it became redundant and got utilised for the St Nazaire Raid. Anyway certainly a very interesting story around the concept and the part it played in the raid itself.

Coming along nicely, an odd looking duck, and an eye-catching paint scheme for sure. Looking forward to seeing more.

Thanks for looking in Al, hope all is well.

I’m doing quite well, thanks. Hope you are as well. Cheers

Plodding on Al thanks… Some progress, still more work on the wheel house needed, before it can be assembled. The bridge is fairly basic but the over all build is coming together. Biggest issue with the kit is the seems on major joins. This was a good kit to start on as it will help in the build of MTB 234 which I hope to do in a while. Anyway some pictures of where things are at. 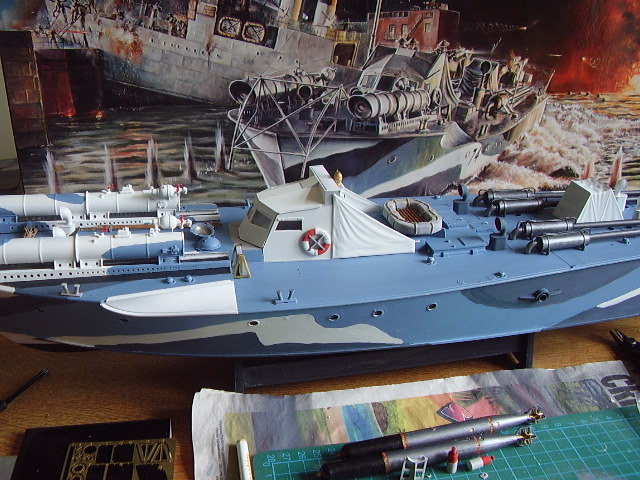 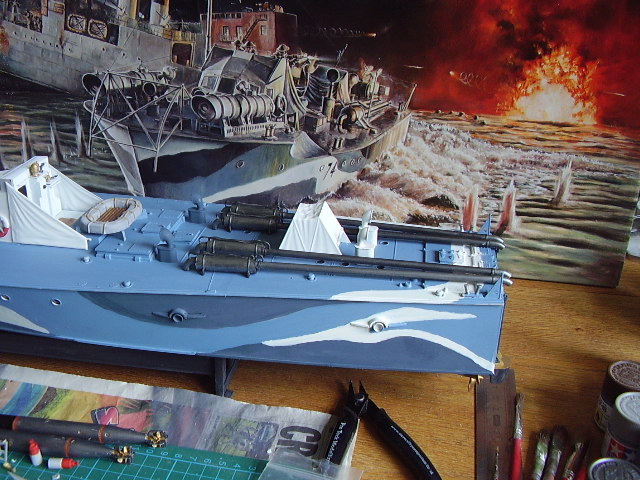 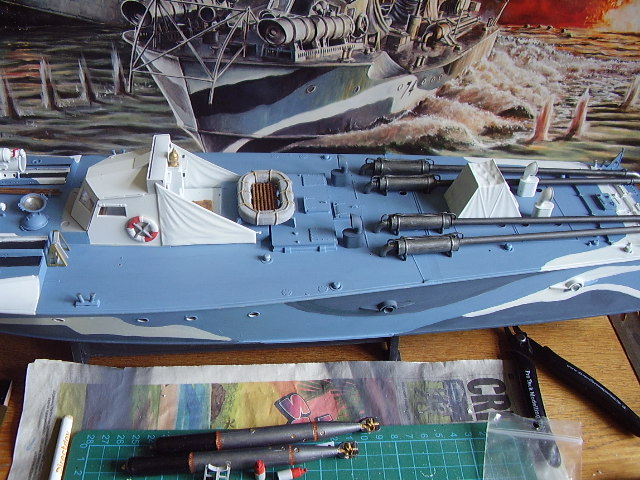 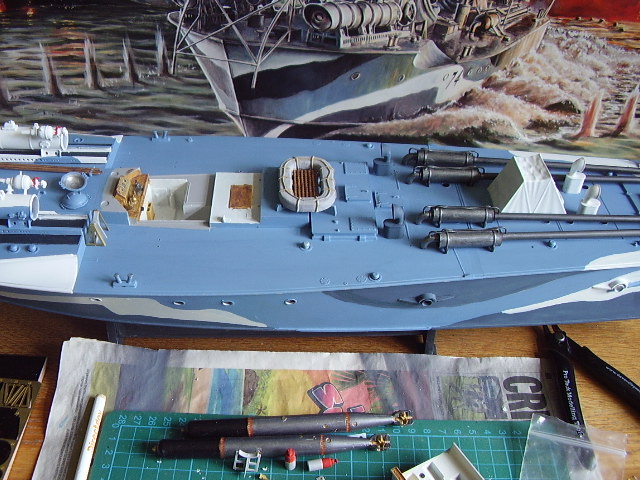 I can’t remember when this kit came out but it must be 5/6 years ago as I’ve had it sitting around for a long time. Sad to see Italeri haven’t brought out and new 1/35 scale boats since then. Still I have plenty to build.

Stunning camo work Alan, this will be a very impressive piece of work when its all set up.

Thanks for looking in Karl and the comments. Some more progress. 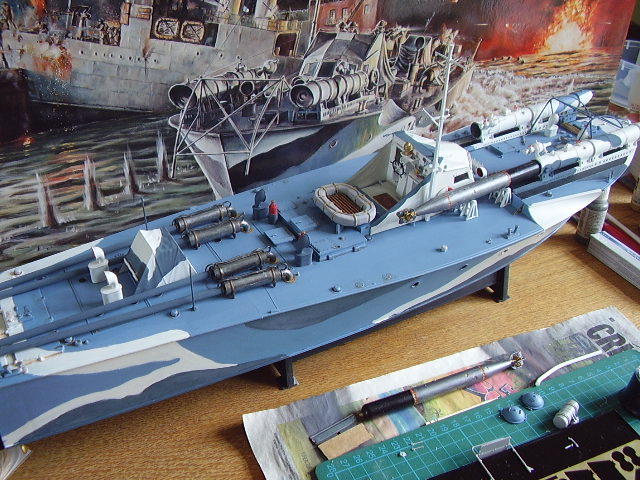 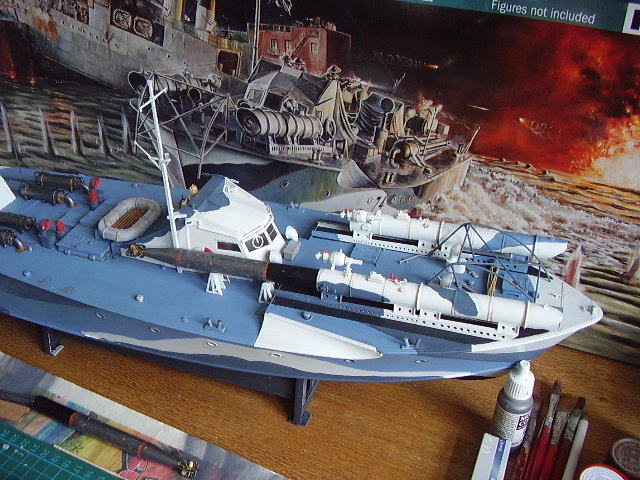 Alan,
That boat is looking real good!..keep up the great work!
Cheers,

Thanks for looking in and the comments. A bit more progress. Parts 17D, the folding legs of the small map table were a pain as they both broke getting them off the spur. Not that keen on the rigging thread so might replace it . Place some figs for scale. Weathering and setting the final layout next, I was thinking of a mechanic/welder fixing the jig at the bow. Is it credible that the boat would have sail on the mission unarmed? I would have thought they would have added a couple of MGs just for self protection? Although I haven’t seen it mentioned elsewhere I noticed on the drawings armaments included .303 MGs!. Any thoughts? 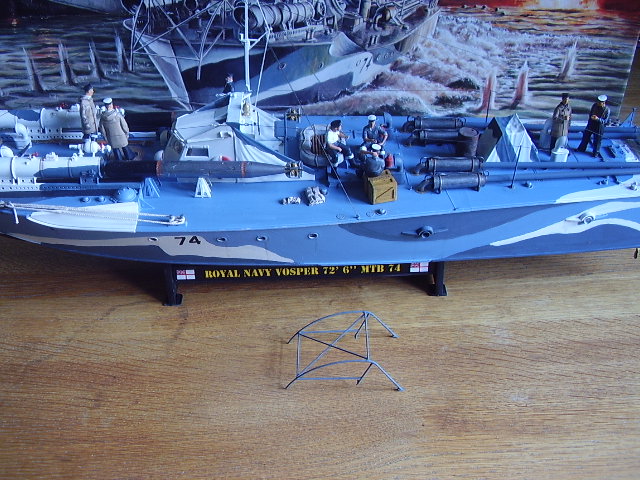 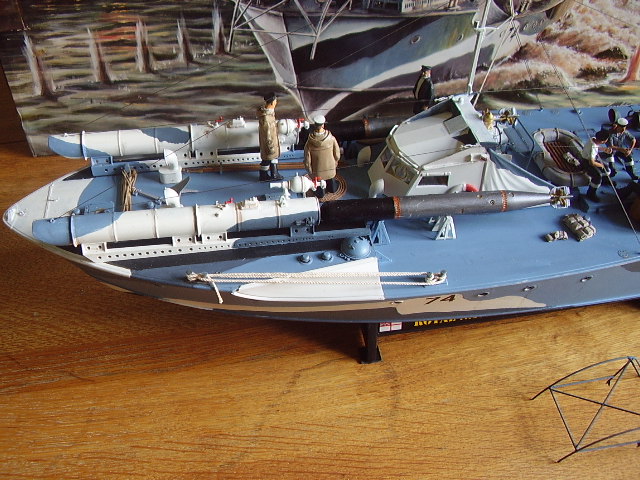 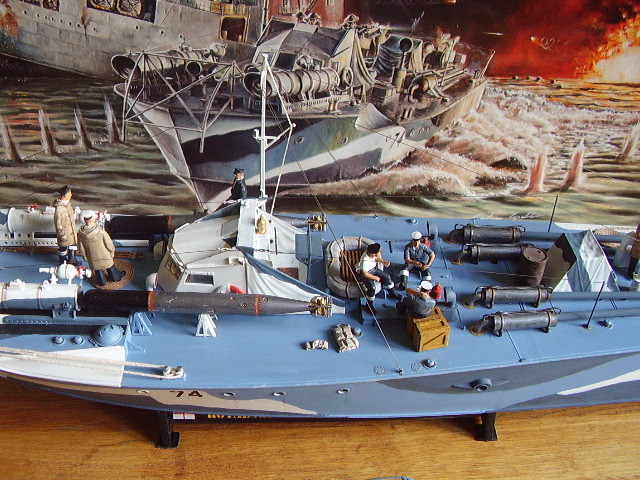 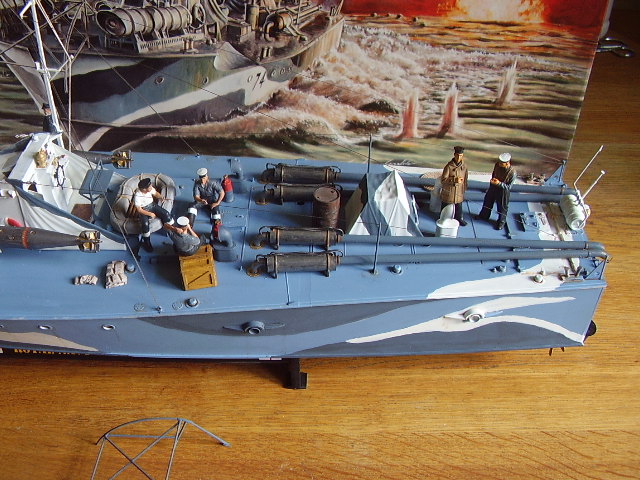 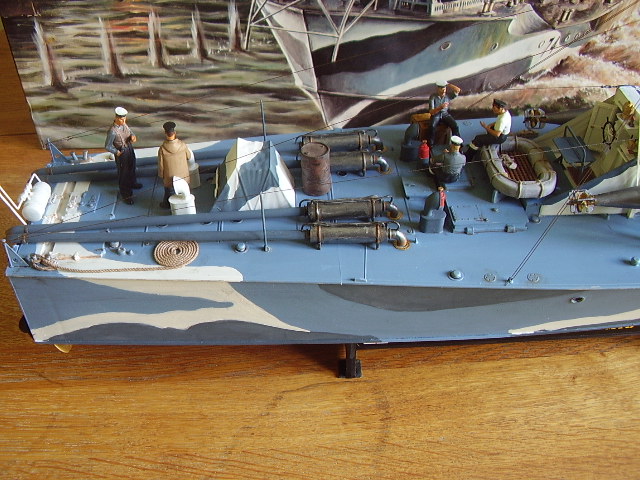 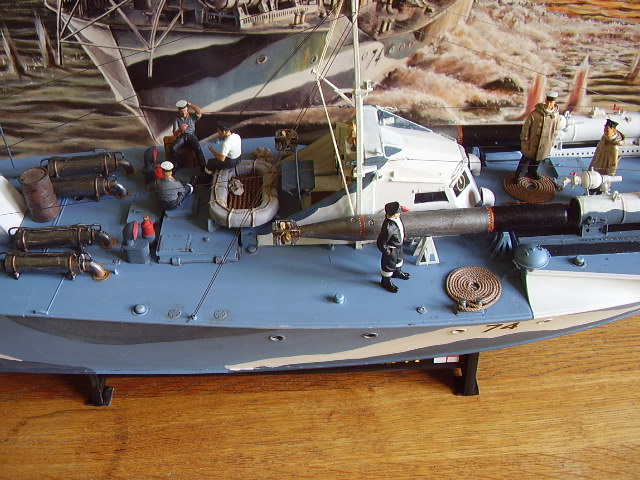 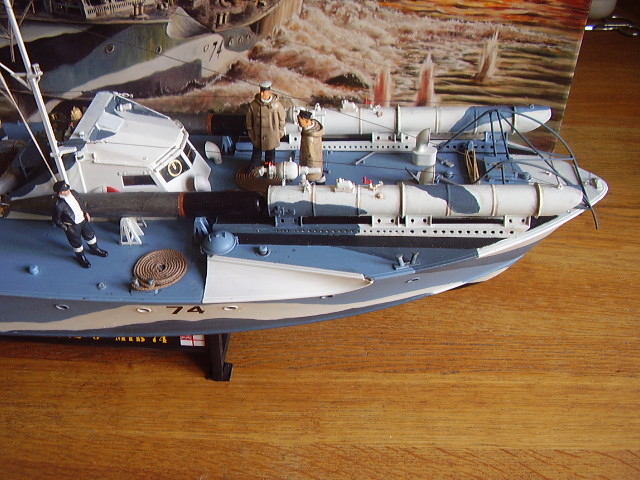 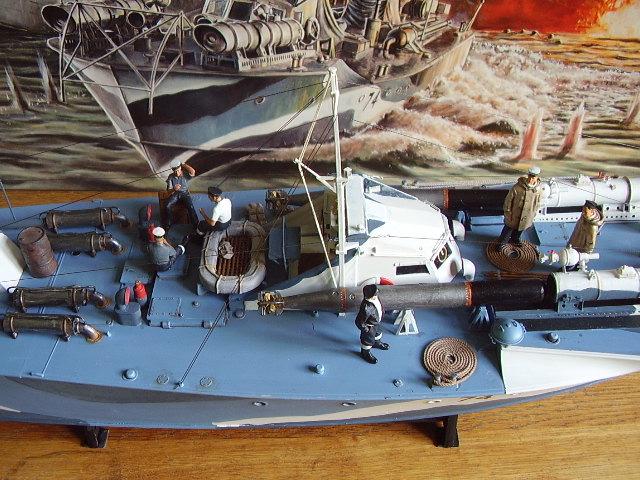 If I look at the pics of the original, it didn’t seem to have any other armament. 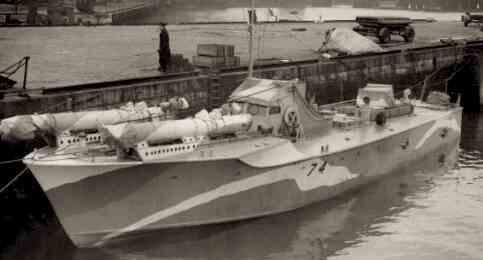 It seems that the darkness and speed were deemed to be enough.

I found an e-book giving more background info on the vessel (and coastal vessels in general). It explains the reasoning behind the modifications: Allied Coastal Forces of World War II. Volume 2. Vosper MTBs and US ELCOs

Thanks for the response. I have the book you mentioned and it was in the drawings for MTB 74 that I found the reference re armament. The picture shows the boat prior to the modifications to the exhaust system, assuming these were done as per the original plans and prior to the raid. It would seem reasonable given the close contact expected that some form of protection would be provided as the craft was an important part of the back up plan if HMS Cambeltown failed to reach the objective. MTB 74 was a mere 20 years from the old lock gates when it fired its torpedoes. The book provides only a very brief description of the action but it seems unlikely to me they would have sent the craft armed only with some revolvers and rifles, as at least some of them hoped to make good their escape back down the estuary. It was just a question that I thought worth asking under the circumstances.