What Paint Color for Modern US 105mm How Canister?

Hi guys,
I have made the jump from WW1 and WW2 US artillery pieces to modern. I am currently weathering the excellent Vargas Scale Models M119 105mm Light Howitzer. I need to paint up the ammo and don’t have a match for the modern steel canisters. I’ve got two of the 1:1 presentation canisters in my den but none of my metallics are close. The 1:1 has a greenish tint to it. Has anyone found a metallic paint that is a good match for this?

For what its worth AK Extreme Metals Brass, AK475, is great for the WW2 canisters.

Yeah, that’s a tough color to replicate. After you paint it with metallic brass, try mixing a little light OD or zinc chromate with clear. Very little - it should look like tinted clear. Spray over brass until you get the shade you like.

That’s a great idea @18bravo! I’m making a run to Skyway Model Shop in Seattle tomorrow to see if I can find a match in his extensive paint racks. If that fails I’ll give the tinting a try.

Sounds like you are talking about the cartridge cases rather than canister rounds or the ammunition packing tubes. If so, try painting with non-metallic color like a green, gray, greenish gray, or something like the color reproduced in photos rather than real life. Follow that with rubbing in a brass, bronze, or graphite pigment powder.

As the ammo packing tubes are black I hope no one would confuse them. 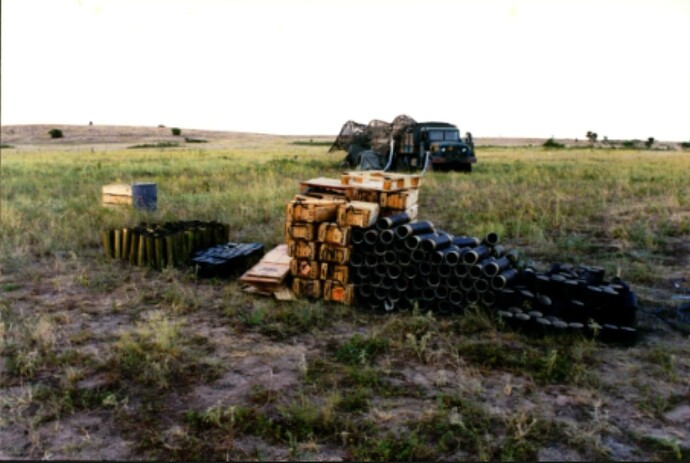 A close up of one in case you’re not lucky enough to have one at home, these are from FA school at Sill in '98. 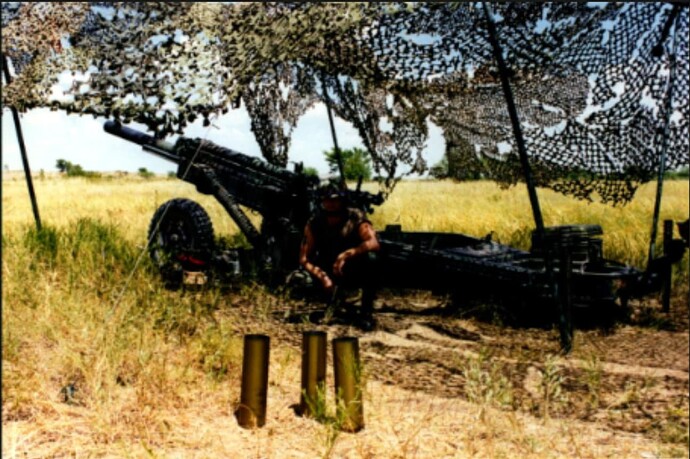 image1295×863 141 KB
They are standers - representing three owed beers. But since they were all done sequentially there should have been a bonus.

And this is from a stint two years ago. Noticeably greener tint - think crappy Wolf 7.62x39 ammo. The lacquered crap. 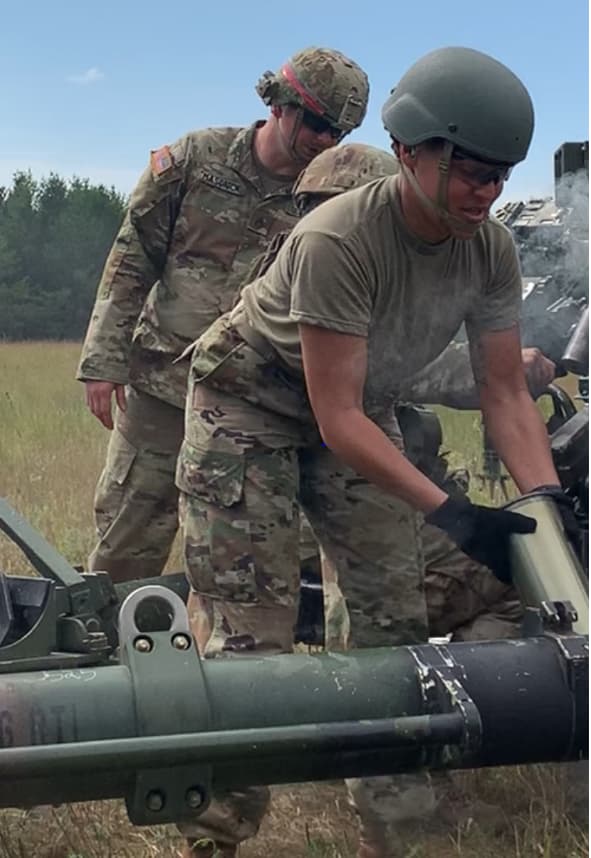 And this is from a stint two years ago. Noticeably greener tint - think crappy Wolf 7.62x39 ammo. The lacquered crap.

Are the current 105 cases steel? (M14B1 was the WW II model.) Foreign military small arms ammunition cases are often not brass but steel that is lacquered or “copper washed”, which is some sort of chemical rather than electrodeposited plating.

I’m not sure, but it seems (according to my memory only) that the newer ones have thinner walls.

Kurt,
The brass canisters were phased out long ago. The two that I have are dated 1945 and were issued in the late 80’s or early 90’s with the last of the colored smoke rounds. We saved these for presentation awards. All of the other ammo from the early 80’s on were the rolled steel canisters. The two of those that I have were manufactured in 1972 and 1975 and are model M14B4. 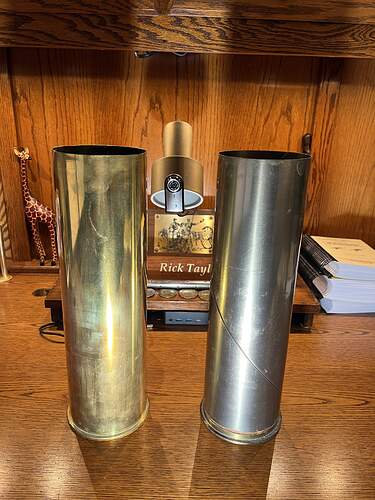 18bravo, tossing 3 standers in a row is quite a trick. I’ve not seen that before.

I discovered the trick early on. Most guys tried to get the base to hit first while it was at a shallow angle. My method was counterintuitive but worked so well that the gun chief said screw it, I’ve lost count. I’ll just get you a keg. My method was to toss them with the base facing away and angled upward. When the open end hit it would bounce up and land perfectly on its base. Exactly the opposite of this:

True true true. Brings back memories of my time in a 105mm unit. The real brass powder cannisters (the technical term) were highly sought after but a source of problems since the Ammo Storage point usually expected every single fired cannister to be turned in to prove there were no live rounds on the loose. But that was peacetime and rules likely loosened in combat zones.

I would suggest trying Citadel’s green transparent shader “Biel-tan Green” over a base of steel or aluminum paint. If the shader is still too intense dulete with either water or Citadel’s clear medium “Lahmian Medium”.
Citadel products are most often available at the “Dungons & Dragons and World of Warcraft” type fantasy hobby stores. 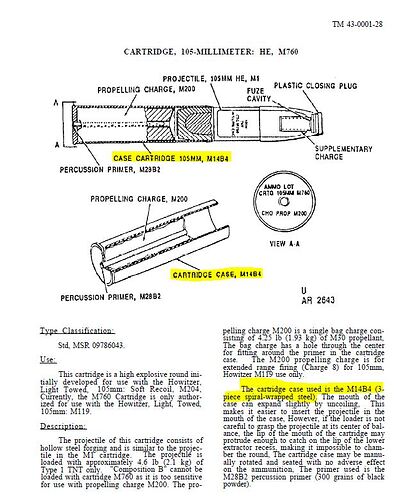 Kurt,
Yes, the manuals call them cartridge cases. I don’t recall an artilleryman calling them anything but canisters in my 25 years.

That’s what I figured, so, contrary to what someone wrote the “technical term” is actually cartridge case while canister is the common term.

That’s true of most things in the Army. There is the official “technical term” and there is the name everybody uses.
For example, this item: 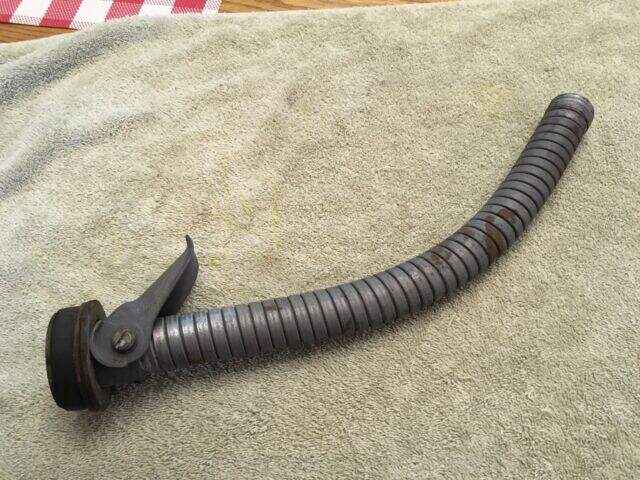 That’s true of most things in the Army. There is the official “technical term” and there is the name everybody uses

Yes, I know. The thing was that in this thread someone essentially wrote that the official nomenclature was donkey dick.

Been a gunner for 30+, always called them casings.

I have references on US breech-loading field artillery going back to the 19th century and in them these items have always, uniformly, been identified as cartridge cases. I understand troops don’t always use the proper name, but it puzzles me as to how anyone ever began calling them canisters in the first place. Even separate loading powder bags were called cartridges 100+ years ago. It is not as if canister was the official term for 75 years and it changed, plus there are already other artillery items that are properly called canister. Very odd that the common term would end up there.

Having been in the military in five different decades, I’ve noticed that a soldier rarely calls a thing by its nomenclature.
This old thread illustrates that well:

Redleg called it a “radar speed” gun. I called it a “speed counter” as that’s what we on the guns called it. No one I ever met in twenty four years of Field Artillery ever called it a chronograph, although we all knew that’s what it was. I went to the 40 level Field Artillery school three years ago, and those instructors called it a speed counter, save for one funny guy who liked to call it a speedo.
The thing that grates on me in my other two MOS’s is hearing someone who should know better calling a magazine a clip. Of the hundreds of weapons I’ve fired, the only clip I ever used was on an M1 Garand. Mag is fine with me, though.
And what most people call bullets? We call them cartridges or rounds. The bullet is the projectile.
And the list goes on.

Fortunately, having studied linguistics and languages most of my life, one thing still holds true, in prescriptive and descriptive linguistics - you can call a thing anything you want. If everyone understands what that thing is, it’s valid. The same applies to words other than nouns. It took me a long time to get over irregardless, (a favorite of one of NCO’s way back in the day) but if I am to adhere to purely linguistic “rules”, then I guess it’s word too.
And after having said all that, I will never accept conversating as a word in the English language.