Ive been wondering who still builds them. Back in the day when i started building aircraft (1970) Revell and Hasegawa 1/32 were Top Dog. Now all I ever see is 1/48 scale being built. Would it not be easier on your eyes building the larger scale?

Yes big and easy to work on,but eat up a lot of space,and the newer kits are pretty expensive like the excellent Tamiya kits,even before details so I stick with 1/48,but plenty of modelers are into them as this site bears out,and lots of great choices.

I think part of it has been the rise in kit prices over time; the 1:32 kits fell off in sales compared to the 1:48 kits because of their higher cost. Zoukei-Mura is a company that has been bucking the trend, though; they produce 1:32 kits with what can be insane amounts of detail – in their Ho229 kit, when building the Jumo 004 engines, you thread ten compressor rotors on the central shaft, then the two halves of the compressor stage of the engine – each of which has eleven halves of the stator disks – close around it, at which point all of those parts except for the front stator vanish inside the engine and are never seen again. in their Do-335A-0 kit, instead of alignment pins for the cylinder blocks of the DB603 engines, the pistons and piston rods are molded inside the cylinders – and again disappear inside the engine when it’s assembled.

You can still get some good deals on the Revell from Germany kits. But the flimsy boxes they are in really suck. The used Revell and Hasegawa kits on Ebay are asking insane prices.

I still see people building the large scale stuff. But it’s so big! Living in an apartment, something like Revell’s new Hurricane is out of the question. Quarter scale is the best compromise, though 1/72 is looking better and better.

I used to build 1/32 aircraft as a kid. They were fairly affordable back then, and looked great hanging from my bedroom ceiling. No worries about display space then. Some years back while on deployment with the Army Guard overseas, I decided to try my hand at 1/32 aircraft again, as I knew that I could leave them behind when I rotated home and not worry about display space. It was fun to build those big beauties again, and I saw what I could do with my improved skills. I ended up buying more to build afterwards and have a couple of projects sidelined partway thru the build, and finally some space to display such large beasts (along with 1/48 large aircraft). One of these days I’ll get some of those big birds finished. 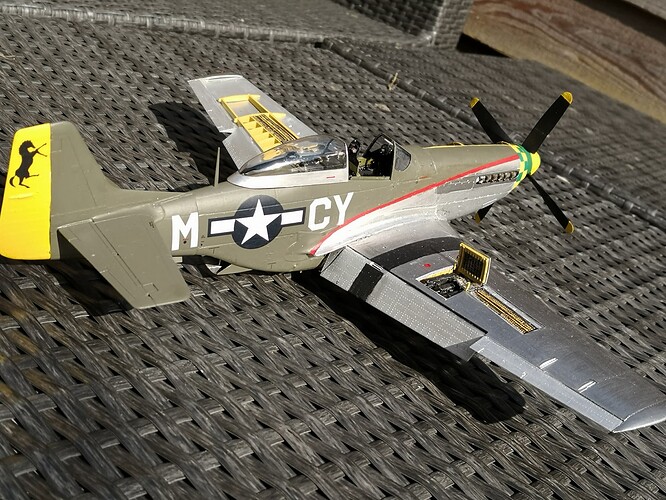 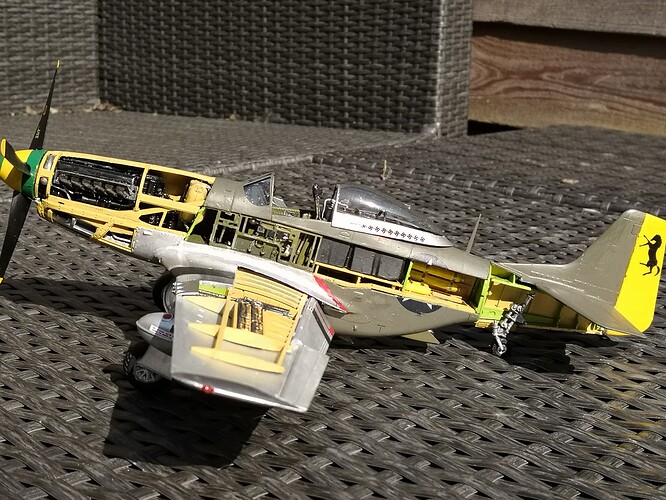 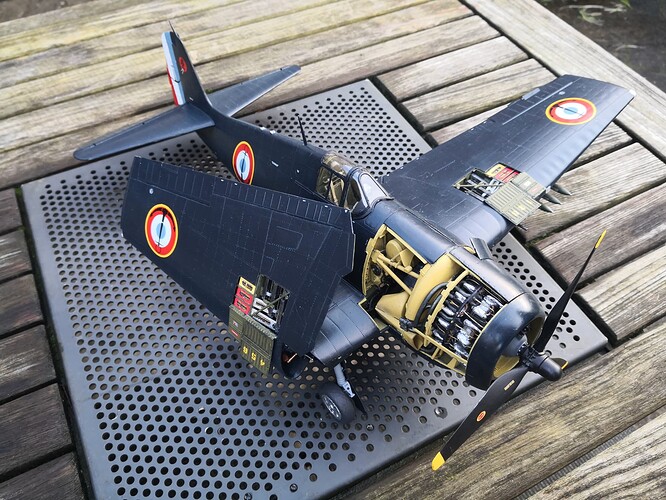 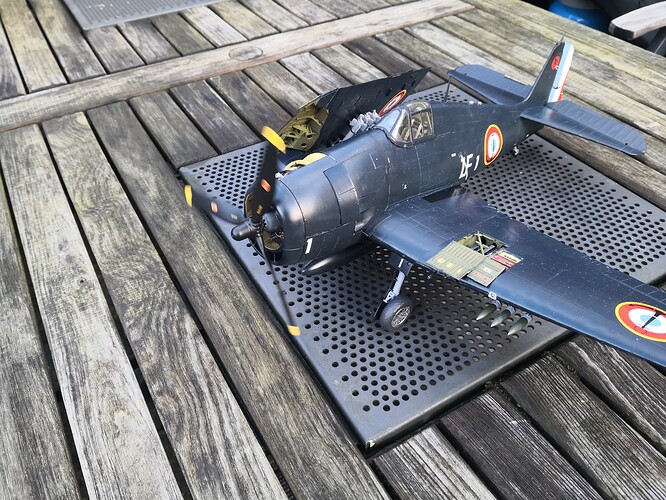 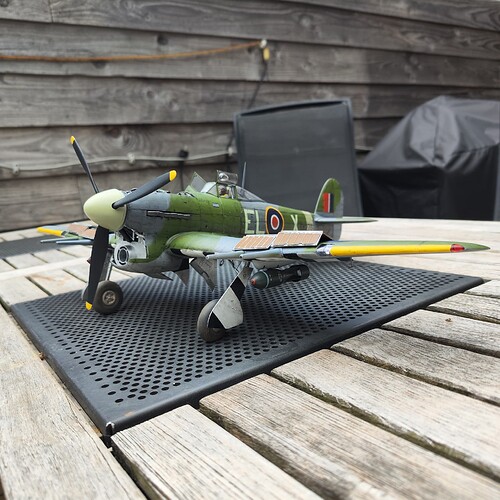 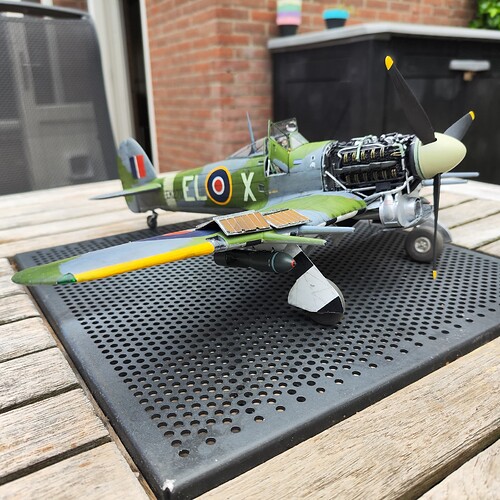 Yes indeed! @golikell, all three planes look great, I have to say the Typhoon doesn’t get enough attention for such an awesome plane.

I’ve got a few in the stash, just never get around to doing them. I bought some of the 21st Century Toys kits when a local discount store had them for £2 each. I grabbed a couple of BF-109’s, a Stuka, Zero and Macchi 205. My sister bought me Revells Iron Maiden Spitfire 2 Christmas’s ago and I really do need to build that. There’s also a couple of Matchbox Sea Venoms somewhere. One my dad started when I was younger but never finished, and a second Revell reissue I wanted to have a crack at myself.
I was lucky enough at the time to buy all of the WNW kits I wanted, boy do I feel good about grabbing those when I did! Of those, I only ever did the Rumpler and I still need to do the final assembly and rigging. There’s a couple of Special Hobby and A-Model WW1 planes too.
1/32 seems to work really well for WW1 I feel. The right size to show off all that detail, but the aircraft themselves are not too big to display.

Now, that 1/32 Revell F-4G I bought on sale from Amazon is a different matter altogether. That thing is HUGE!

Now, that 1/32 Revell F-4G I bought on sale from Amazon is a different matter altogether. That thing is HUGE

Yes it is! That’s one of my sidelined stalled projects.

A tad bit over 24 inches/61cm long at this point

Wow! Yes, I have no idea where I would put it.
I think I got it for half the RRP or something silly. Bargain!
Was the US release different to the European boxing? That only had SEAC or Euro 1 cammo with the old AGM-78 and 45.

Was the US release different to the European boxing? That only had SEAC or Euro 1 cammo with the old AGM-78 and 45.

I received the original US Revell release as a review kit (there’s more to that story, but…) I think the only difference between the kits was the markings. The US Revell kit is in the last worn two grays Egypt I/Hill scheme. Which it did not have the proper AGM-88 HARM missiles usually carried by those Weasels.

I got my first real airplane kit when I was 12 years old. It was the Revell 1/32 scale JU-87B STUKA. My eyes bugged out at the size of that beast when I opened the box. After that I was hooked on 1/32 scale.

There are quite a number of 1/32 WWI planes released, there seem to be hobbyists who buy them.

Yeah, that is strange. Probably too costly to tool them. The 78 was long gone by the time that scheme came into service. Although I think some 45’s were still used towards the end of Desert Storm? It would have been nice to include at least one Egypt 1 option in the European release, but it probably needed a different set of stenciling now I think about it.
I’m sure a pair of HARM’s could be found for it though? Maybe Trumpeter did them in their 1/32 weapon sets.

I don’t think there’s any danger of 1/32 (or 1/24 or even 1/18) disappearing anytime soon - lots still on display at local model shows down here and seems model companies still releasing them, so people still buying them…

Yes, I’ve seen photos of some Shrikes being used in 1991, as well as Mavericks. It was not only and all HARMs carried by the Weasels then and there. And yes, Trumpeter does have some AGM-88s in one of their 1/32 US Aircraft weapons sets. I have a pair set aside for mine.

Thanks. I couldn’t remember exactly if they were. I have got a book somewhere about the Wild Weasels I Desert Storm I read years ago so was trying to go by memory. Must dig it out to re-read.
Sounds like you’re all sorted for your build.
When I ever do get around to mine, I’ll probably go with the Euro 1 with the 78. It’s an impressive looking thing at that scale.