Who owns copyright on art work?

Jim split this out from a gun truck decal thread so that is why it starts in the middle of a conversation.

That is a new one to me. It is government equipment that doesn’t fail under those rules and I wasn’t aware you could copyright names. No different then aircraft names/nose art. Has something changed?

Many of the photos of gun trucks are licenced. It is not the truck that has a copy wright , but the name that the crew put on the side.
Good examples are eve of destruction or nancy. Those names are copyrighted when used in that manner . ( ie gun truck )
I am just erring on the side of caution.

Those names are copyrighted when used in that manner . ( ie gun truck )

Copywrited by whom? They are military vehicles owned by the US people. I don’t see how this is a copywrite issue.

Yeah, I’d like to hear more of how somebody has copyright on a US Government vehicle name. I could see it for a museum piece like Enola Gay or Memphis Belle, but not for some random gun truck.

Think about it you don’t see logos or special names.

Still not tracking. Who holds a copywrite on the names applied to these trucks 50+ years ago?

Not an expert on this field, but using logic, I doubt the government has a copyright on the name painted on a vehicle, and for the crew, it would require registering it somehow, a process which is not so simple nor free. Why would they do that?

Also, I guess Echelon has paid to use the names of all these??

Same for Archer and Star Decals…

Im just avoiding possible issues. Thats all and this has turned into a cluster about names

And I guess Star must have paid to use the names to, since they have 7 sets of gun truck markings.
https://www.star-decals.net/35scalemodern.html

And AFV Club, which has King Cobra and Nancy: And Real Model who does 6 conversions complete with decals.:
https://realmodel.cz/index.php?option=com_virtuemart&page=shop.browse&category_id=35&Itemid=79&vmcchk=1&Itemid=79&redirected=1&Itemid=79

Even Archer did a sheet or two of gun truck decals, which I believe are no longer available.

So are all of these companies breaking the law and being chased by lawyers? Since AFV Club released “Nancy” over 10 years and it is still available, I don’t expect so.

While I appreciate your efforts Chris, given that Vietnam gun trucks are so well documented with many different colorful markings and dozens of options, I really believe that modelers want to build actual gun trucks.

While I appreciate your efforts Chris, given that Vietnam gun trucks are so well documented with many different colorful markings and dozens of options, I really believe that modelers want to build actual gun trucks.

^^Dotto^^ I would definitely want to build a guntruck that actually existed as opposed to one w/a made-up name.

Actually, you can’t legally copywrite just a name: https://onlinetrademarkattorneys.com/faq/copyright-a-name/
You can trademark a name as part of a business, but not just the name or phrase by itself.

I was advised not to use one of the known names , but evidently it is OK

Not a copyright lawyer but what gets lost in the sauce would be if you tried use those photos for marketing of your product then you would probably run into issues as those could be a person’s property but that does not apply to the truck name.

That actually sounds more like it . Sometimes with my brain injury things get lost in translation.

I split these off as I think some of you clearly have some crossed wires on this subject.

Names can be registered as trademarks.

Art, creative writing, etc. is the subject of copyright.

So yes… if someone painted those Guntruck names and art (just like nose art on planes) they could be the subject of copyright if the original creator of those works wanted to enforce it. However, they would have had to make attempts to enforce such claims from early on. And as that is probably not the case I doubt serious any Vietnam art like that is under copyright. That of course doesn’t preclude any more modern work from being copyrighted if the creators realize people are essentially cashing in on their work.

So in point of fact there is nothing wrong with staying clear of potential copyright issues as then can exist. Most companies just choose to ignore them unless they are dealing with Lucasfilm, Disney or Ford.

I hope this clears up the issue for some of you.

I will add for the sake of full disclosure that the only caveat to this would be if someone working for the government (as a soldier or even a Pentagon office worker) somehow gives them rights to all works created during their time in their employ. This is something that is usually in most modern work contracts and specifies that all creative works done while at work (or for the employer) is owned by the employer.

However I seriously doubt they had this kind of thing back in the 60s/70s for frontline soldiers in the war.

There is usually something called fair use which allows such things to be used by private individuals so long as they are not for profit. Might be wrong on this but perhaps one of our members is a lawyer and can clarity all of this for us.

Fair use would be posting one of those images here in the forum and talking about it. Not creating a decal for it and selling it for a profit. That is never Fair Use. That’s copyright infringement if there is someone out there claiming to own the copyright that is.

And yes of course if you make a decal and share it with your buddies that is unlikely to cause any lawsuits either. You would have to share a LOT of them. In any law suit the plaintiff has to show ‘damages’ or loss revenues. Clearly the first example is not meeting that.

There was big fight here in Sweden a few years ago about the image of a blue/yellow striped tiger (animal with fangs and claws). In Swedish the word tiger can mean the striped animal lurking in jungles and the verb for being silent. The expression ‘En svensk tiger’ is thus a play on words, “A Swedish Tiger” which can be read as “A Swede keeps quiet” (keeps defense secrets secret).
A graphic designer made this artwork during WW II while he was working for some government organisation. The artwork was used on propaganda posters but he never signed over the copyright.
A private musueum later inherited the copyright from the designers heirs and then the fight began and the Swedish state lost after a while. 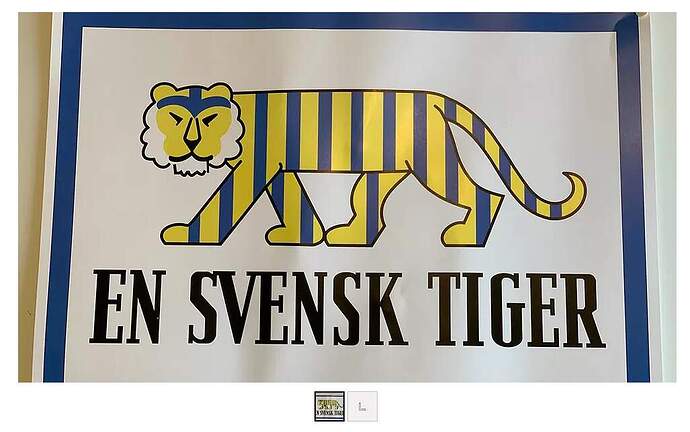 The old (70’ies??) Tamiya King Tiger in a “camouflage” inspired by the poster above.
There is a meaning to the turret numbers …