Anyone know what kind of car this is in front of the Stug? 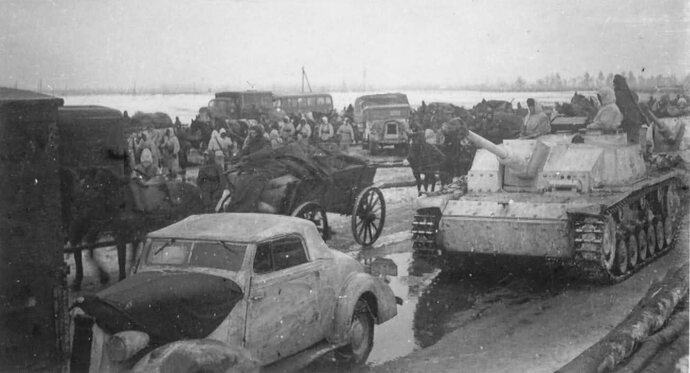 It reminds me of a 1937 Packard 110 convertible, but the suicide doors don’t match… 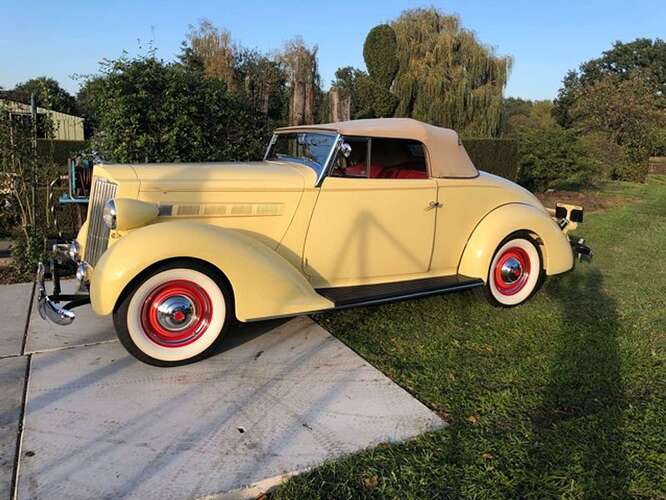 The closest I had come up with is this Mercedez Cabriolet A from 1936. The Benz has the front opening doors and the wipers attached to the top of the windshield, but the grill and the headlights don’t match. The lines of the Packard look more like the picture I think. 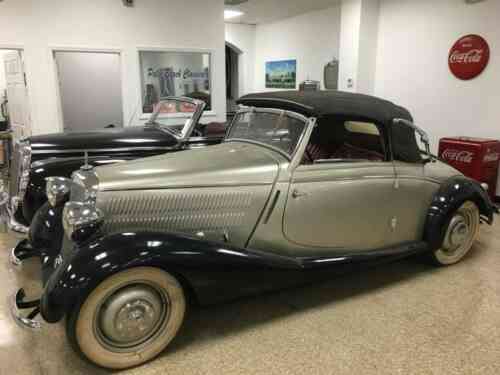 I’ve read that tax laws and duties in Europe made imported cars prohibitively expensive. In certain countries if the car was imported as a chassis and equipped with European coachwork and accessories a significant portion of the duty could be avoided. Some American cars made it to Europe and received custom coachwork upon arrival. Maybe this could be one of them… ?

I was wondering about something like that, or something made under license. Since you pointed me toward Packard I did some more research on them. Looks like they switched from the suicide doors to rear opening doors in 1937, so something from Packard before then would fit the overall lines and shape. I bet that car had an interesting story to tell…

Great picture. I think this might be a Glaser bodied Opel Admiral.A luxury coach built cabriolet built in small numbers before and possibly during the war. I saw a picture of one in Wheels & Tracks magazine issue 10.

The Admiral had the front fenders molded into the hood and the headlights halfway enclosed in the fenders.

The Opel 6 Super Sport-Cabriolet bodied by Gläser (1937-38) looks like this though:

Suicide door and headlights check out but I have doubts about the grille. The old photo gives me the impression of a wider center bar, gave me thoughts about BMW …
Not a split windscreen.
The corner where the side meets the rear fender seems too shallow 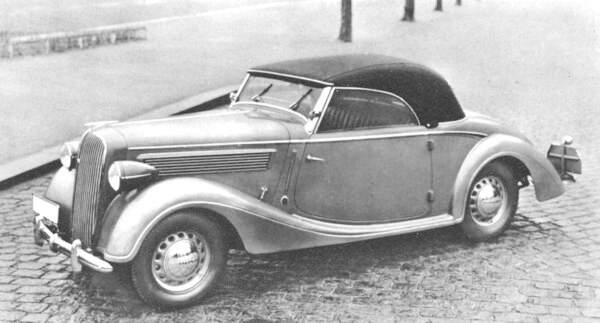 The grille in that wartime photo seems to be concave, reminds me of Chevrolets from the pre-war period.
The headlights style could also be ‘Made in the US’

On a side note, the very same picture was posted on another forum and the ID proposals ranged from a Simca 5 to a BMW 326 or a Citroën Traction-Avant…

For discussion purposes only this looks like a similar vehicle… 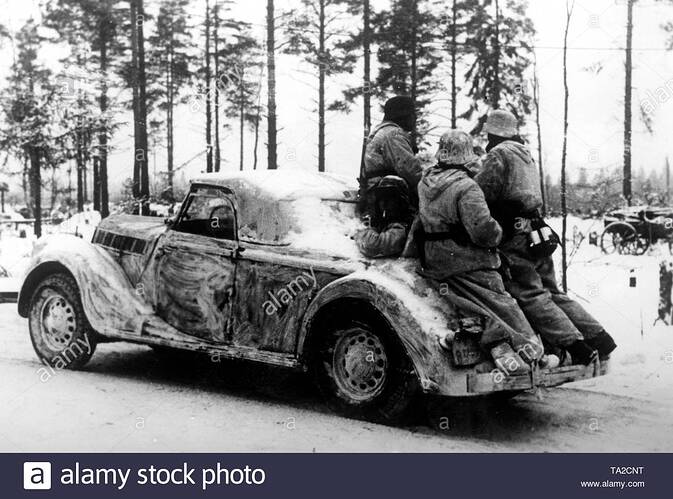 Stock Photo - Three German soldiers are taken away by a car. They sit outside...

Download this stock image: Three German soldiers are taken away by a car. They sit outside on the rear of the vehicle. Photo of the Propaganda Company (PK): war correspondent Braendlein. - TA2CNT from Alamy's library of millions of high resolution...

There are some differences e.g. the mystery car’s a two-door & the rear wheel arch at the back is higher, but if you look closely at the original photo the wheels seem to have the same perforations round the hub so perhaps it’s the same manufacturer? If the mystery car’s also from a propaganda unit it might be identified in a publication about them

This looks awfully similar. The windshield wipers are different though. '35 oldsmobile.

Manx Classics has grown from a lifelong passion for great cars and evolved into a complete, top to bottom restoration ...

Snip from image above: 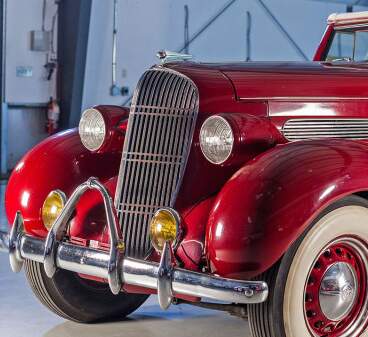 Yeah. There are some Buicks from the same year that have grills that looks more like it, but the hood ornament on them is quite large, and they don’t have suicide doors. I also found a Hudson with a body that is very similar but it doesn’t have the split windshield.

That is a very close match Phil, even the prominent gap between the door & running-board and the perforated wheel rims. As you say the wipers are on top of the screen on the German car but possibly a field modification. I don’t think the radiator grille can be identified either way, it seems to have a cover over it, doesn’t the top right corner overlap the tarp thrown over the bonnet?

Oldsmobile were owned by GM who also bought the Opel company in 1932, but I can’t find any info that they built under licence. If it really is an Oldsmobile it must have been carrying all its own spare parts & how it ended up on the Eastern Front would be a very interesting story. 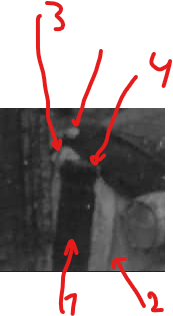 1: Cold weather cover, with a definite overlap (4) over the edge of the tarp or whatever covers the rest of the hood/bonnet

2: Curved line between grille and side of hood/bonnet
3: Some sort of ridge which to my eyes looks as if there was a cntreline of the grille that was continued up and over the top. Looks a little bit like Ford V8 around 1932 -1933 but not quite the same. The curved line (nr 2) looks like the curve on the Ford
4: Some kind of ornament which could be the one on the Oldsmobile

The rest is very similar, totally agree on that score.

Here’s another one that has a lot of similarities. It doesn’t have a split windshield, but it has the wipers attached above. It has running lights on the front fenders but I’m not sure they are in the same position. I hadn’t noticed before, but unless the photo is somehow mirrored, it looks like there is a steering wheel on the right side rather than the left. So that would make me think UK rather than US made. But maybe a US car made under license in the UK? 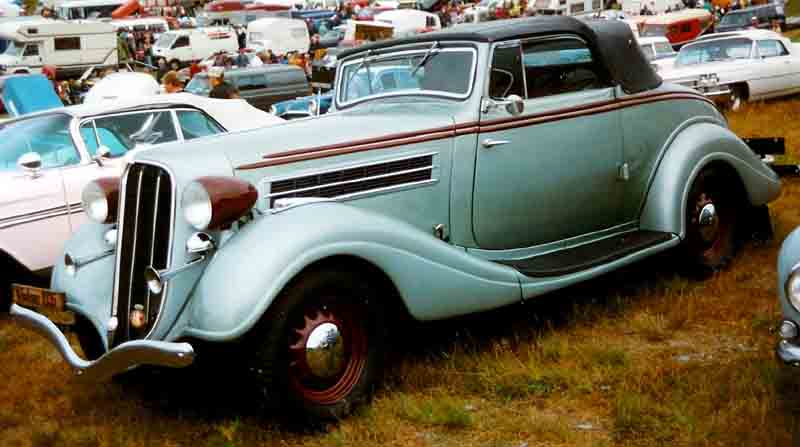 Good observation about the steering wheel!
Now the question is: Is the image mirrored or not?

Edit: Too early in the morning. Silly me should have seen that the Stug III isn’t mirrored. 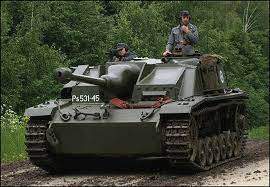 Now we are down to a right hand drive mystery vehicle.

Edit nr 2: Would the top of a steering wheel be visible from this angle?

I found this: 1930s british sports cabriolets - Bing images
It has a British VRM, but appears to be a BMW. The doors don’t match, but it could be a later version. Has a split screen. Officers car captured at Dunkirk and repurposed? Spares wouldn’t be a problem if it’s a BMW.

Good observation about the steering wheel!

Edit nr 2: Would the top of a steering wheel be visible from this angle?

Yeah, too early for you to notice the stug isn’t mirrored, it was too late for me to notice that when I posted!

Good question about whether that actually is the top of the steering wheel. It seemed obvious to me at the time, but since you ask I’m not sure…

I agree that does look like the steering wheel on the right of the car, but not so fast – Austria, Czechoslovakia and Hungary drove on the left (i.e. right-hand-drive cars) right up until 1938. And even if this car was made in the late 30’s in a country driving on the right e.g. Germany, it could have been made for export to one of the foregoing countries. It appears to be still running a long way east in a Russian (?) winter, but without readily available spares it would have conked out long before – it must surely have been made somewhere in Europe