Not only figs but also vehicles. Again, all in H0, since model railways is the market they target…

I’m with you on the ‘learning curve’ John, my whole build has been an experiment, of which many failures/mistakes have been made,

, but hopefully those lessons will be learnt and brought through to my next ‘Braille’ scale build,

I like the look of the Plastic Soldier Company figures, and have had some mixed news from them regarding their Late War British Infantry 1944-45 figures that I wanted to use on my build. The bad news is they’re out of production/stock at the moment, but the good news is that they’re hoping for a new run to be available by August. So my intention is to get this build finished up to a point where it’s passable as a finished project, but one that will have some additional figures added at a later point.

Today I finally glued the building in place and have started to blend in the gap between the base of the walls and the surrounding groundwork, still some way to go, but it’s progress,

I have also added a couple of telegraph poles towards either end of the long dimension and have started to blend them in. Again they need more work to the ‘ivy’ growth, and they need high/low lighting and weathering, 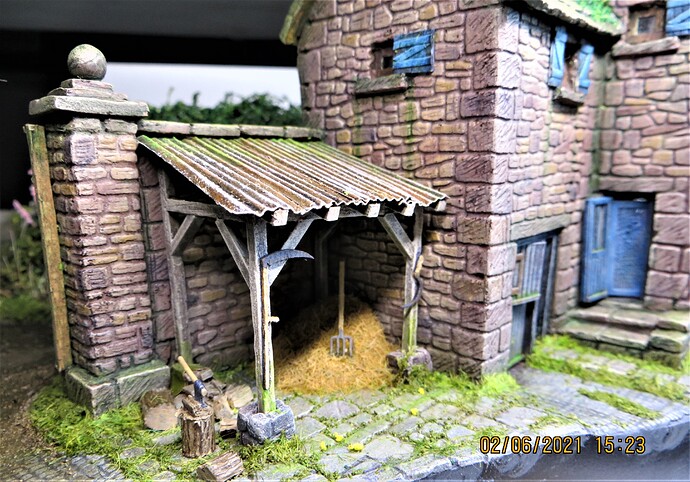 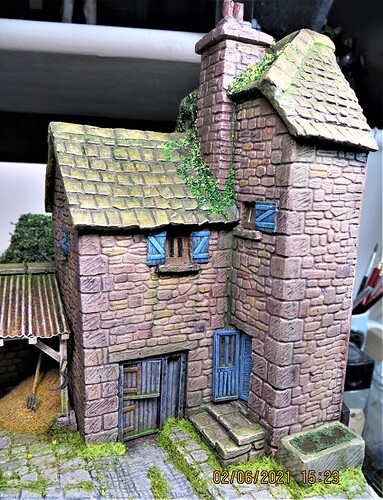 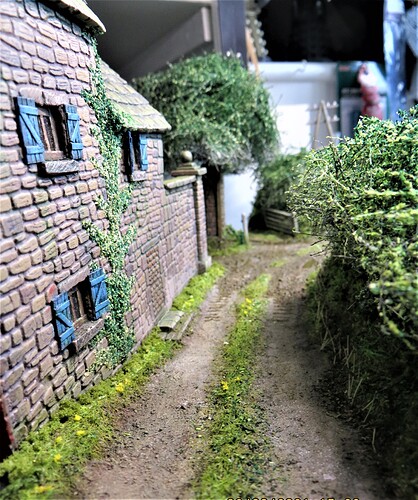 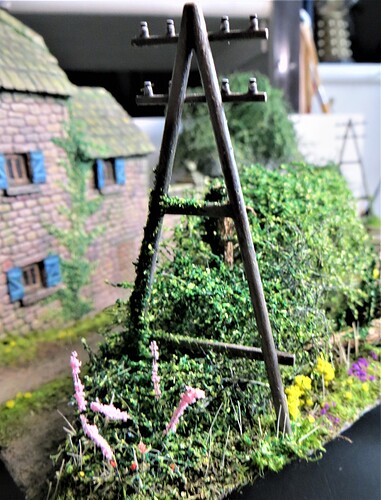 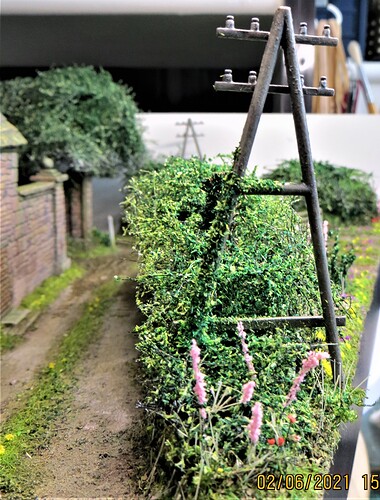 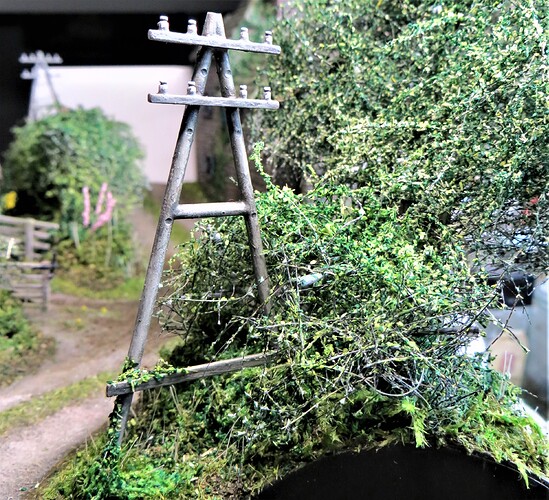 I will need to try and string some sort of ‘phone’ line between the poles, and I also need to cobble together some sort of bracket/connection to connect a line to the building…not sure how to do either yet,

That is looking pretty amazing G. The telegraph poles look really nice and the foliage creeping up over it really adds loads to it.
How common were private phones in rural settings like this ? It just keeps improving with age

Thanks John, wish the same could be said about me regarding age,

You have a point regarding private phone lines, in some ways it would be an easy copout for me to avoid a connection to the building,

, I might wait and see if anyone else comments,

Today I had a go at adding some lines to the telegraph poles, not great, but I think I know what to do next time to get a better appearance,

It did convince me to never do a fully rigged ship of the line…don’t envy you your HMS Victory build John, 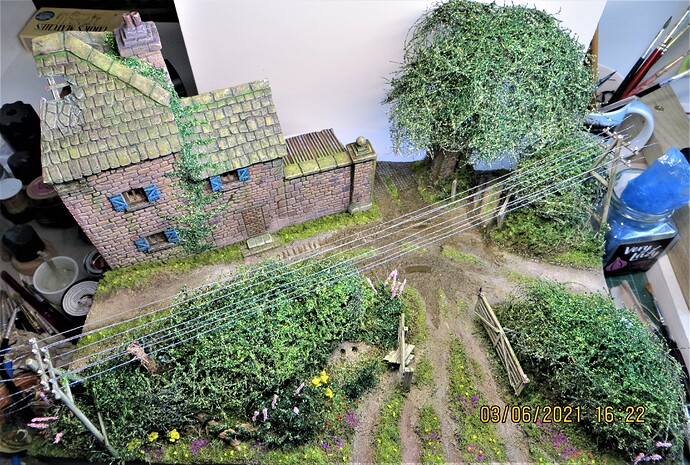 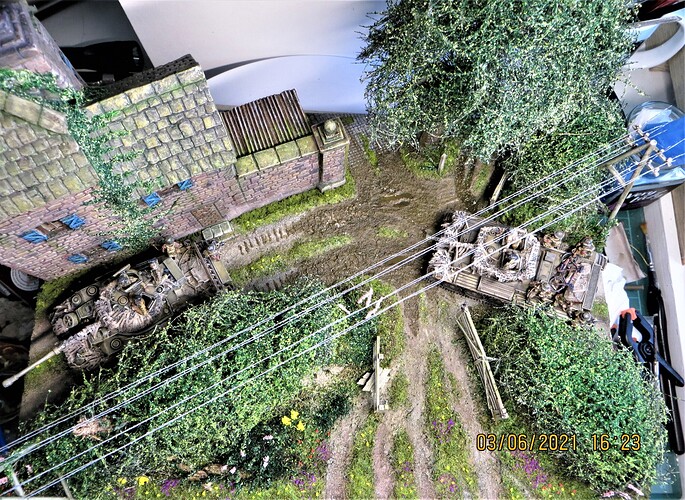 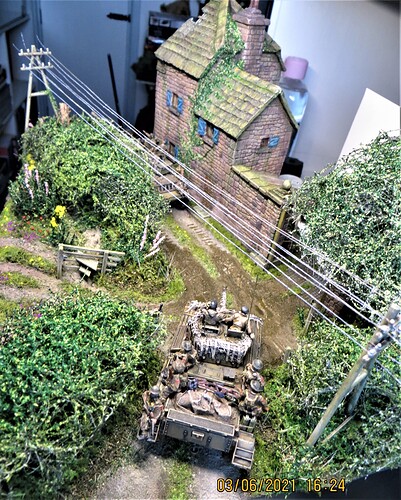 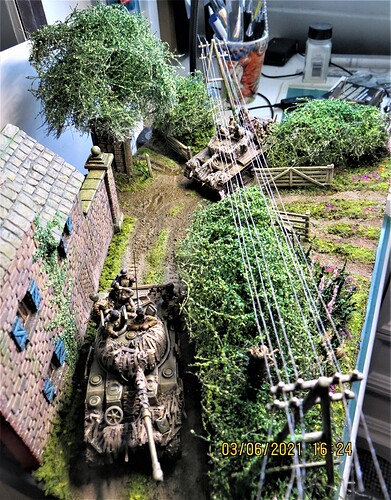 I’m thinking of calling this built, it’s 90+% finished, the figures I want to use won’t be ready until August at the earliest, but well before the finishing date. There might be a few tweaks before that, but I’ve monopolised this build thus far, so rather than keep boring folk with pictures that hardly look any different I’ll hand over the baton to someone else and just pop back when all figures and tweaks are added,

I’ve made a great deal of mistakes, but I’ve enjoyed my first ever group build and ‘Braille’ diorama and will hopefully incorporate lessons learnt in my next project, another group build, and another ‘Braille’ scale diorama, plus another first for me…railways…link for anyone interested…Inaugural Railway Campaign

Thanks for all the support, and I look forward to returning the favour as I continue to follow the rest of the builds herein,

Fair points G, and apart from those few figures, there really isn’t much more you can do to this. It has been an amazing watch from the very start as you made the plans and then started forming those into reality.
It is super realistic at every level, and all the little tweaks you’ve added have enhanced it every time.
You should be rightly proud of this one as it is a stunning Dio… Well done that man …
I suppose I had better crack on now with mine … Pressure !!!

@G-man69 Amazing work, looks so realistic it hurts…
Was watching the build unfold from concept to reality with expectation from post to post.
Regarding the lines, I used a black colored wire (I think from copper) in my first and only diorama so far.

Bravo G it’s a stunner alright – any chance of some final daylight pics? I kinda agree the lines could be dark or black but maybe outdoors they’d look better as is. Anyhow nice to see the Dio police are about to let you out on bail having gnarly oops nearly finished this one

A bit of an update … G finishing his little mini masterpiece has shamed me into cracking on with the effort I’m throwing together.

I have put some colour down on the earth and got it roughly were I need it to be. 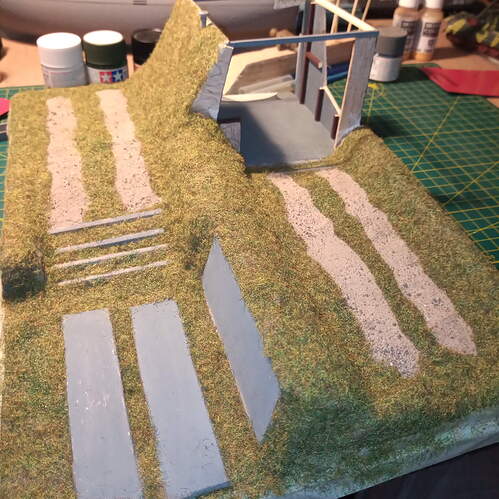 I masked off the areas the tracks would likely wear away and I have made the roof section which I will be keeping whole and not cutaway.

The front of the sunken hanger will be painted a rough cam and I have to figure out some way to incorporate a cam net partially folded up for the E100 Flak 40.

Thanks to John, Ryan, Gil and Tim for their kind feedback, much appreciated,

. And nice I’ve managed to evade the DioFuzz…at least for now,

With regards the colour of the phone lines, that was a deliberate ploy…honest,

…the cotton thread had no sense of weight, nor was it ‘rigid’, so I decided to give it a thin coat of diluted white glue. The only thread I had was was brown and so, because I’m getting a tad long in the tooth, I decided to mix a bit of acrylic light grey in so that when it dried I’d be able to see the thread more clearly when I wanted to paint it dark grey/black.

Hopefully this will be evident when I accede to Tim’s request for some ‘daylight’ pics, think we’re due some sunny weather next week,

Brilliant start to the groundwork John, it shows up all the great changes in level that help create a feast for the eye,

Have begun the slow laborious task of cleaning as much of the flash and seams from these figures… When does this group build finish .

On a closer examination they all have some degree of flash or issue, and being soft plastic it is a real mare trying to get it off…onwards and upwards lol…

I don’t envy you that job John, I had a similar experience, the only solution I found was a sharp knife, as was backed up by Erik in an earlier post…see below.

Sharp knife, that’s about it. I have some times worked with a hot blade and very carefully melt the plastic. I never use a file on 1/72.
Most important: patients…and a lamp like this:

I don’t think I will be enjoying this part of getting these figures ready. I don’t remember the old Airfix or matchbox figures being this bad for flash etc … But admittedly, that was many moons ago…
I finished of the main part of the hanger so that’s now ready for a coat of earth colour, then the grass effect.
I put the folding doors in and a side angled access door. 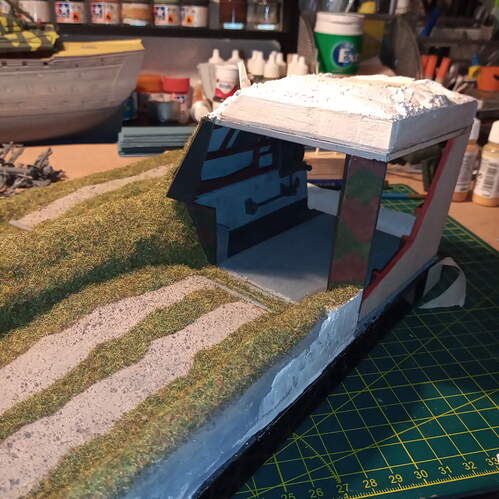 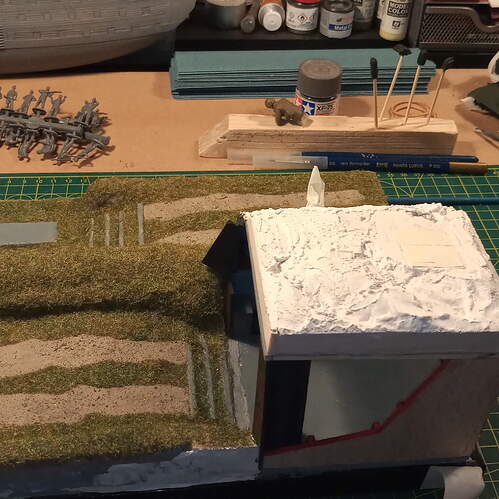 I started applying a cam finish to the hanger front and folded door front sections.

The inside is pretty much done and I am waiting on the stowage / kit sets I ordered. 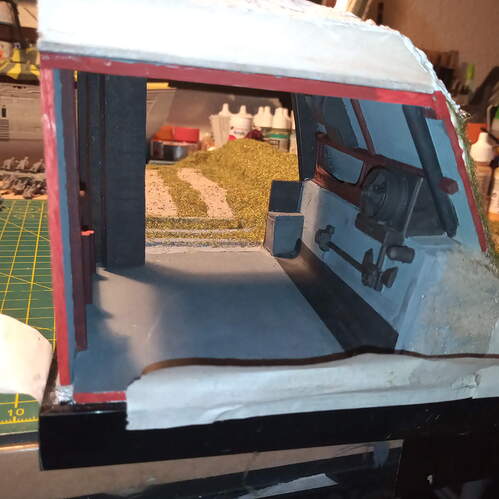 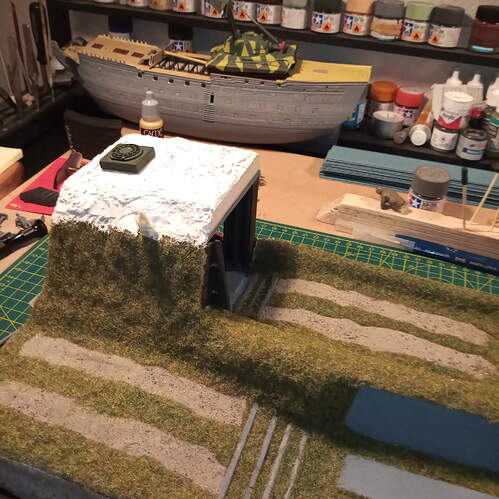 Hi John, your groundwork is excellent and the sculpting on the hanger roof looks really great. Very nice job thus far. I especially like the AAA assets on the HMS Victory!

Haha cheers Matt, I forgot I had put that there. maybe do that for an alternative what if scenario !!

Once I have some weathering and the ground stowage it should tone it all down a bit and make it a bit less sharp if you follow me.

Great looking base John, really liking the cutaway internal details and the external extraction housing, nicely thought out use of spares from the box,

Matthew’s comments about the up-gunned HMS Victory made me smile,

, no wonder we won at Trafalgar,