The timing for the release of the Airfix 1/24 scale Spitfire Mk IX couldn’t have been better. I had ordered mine as soon as it was announced and it arrived in time for Christmas and it went under the tree until the 25th. I started it on the 26th although I was going to finish up other projects first. I started with the engine telling myself that if I just built that then it would be ready for when I got around to building the rest. But I enjoyed building it so much that I carried on with the cockpit. I am taking my time and I’m not looking at any of the builds on YouTube so that I can see for myself how this goes together. I did have a quick look but the one that I looked at didn’t seem to have much of a clue about Spitfires, and not understanding why the rear tailwheel sections are separate. Airfix has allowed for a Mk VIII which is great news.
So far everything fits wonderfully well but I’m not sure about some of the colour callouts. The pipework for the engine and cockpit is shown as Humbrol 54 Brass. I’m sure that it is copper, certainly for the engine and maybe painted cockpit green or copper within the cockpit. But there is at least one flying Spitfire that seems to have brass pipework in the engine. But that’s not wartime. So make your choice here.
many of the cockpit fittings have several colours on them so I plan on painting those parts separately and I’ll start with cockpit green.
Airfix provide IM seat belts, which is a nice touch, they do need thinning a bit due to the limitations of the IM process and I will go my normal route of using an HGW set, when they are back in stock.
The instrument panel could have been done better I think. You do get a choice of 2, one with all raised detail for painting and the other has flat areas within the bezzles for decals which I think is the better option. I do think a one-piece decal (for the most part) on a backing plate over which goes a clear panel and then the instrument panel with cutouts for the dials or something along those lines would have been better. I have ordered a panel from Airscale, which is also sold out!
There are 2 sliding canopy pieces, one is slightly less bulged and has no seam line to remove for those that don’t like the idea of doing so.
There are 3 separate cockpit doors, one for an open canopy and open door, one for an open canopy and closed door and one for a closed canopy and closed door. For this option, there is a jig to help you remove a part of the cockpit sill on the starboard side. There are separate locking mechanisms and a crowbar (to be painted red! although Airfx calls for silver).
I’ll talk about other build details as we get to them. What I can say is that if you buy this kit then you won’t be disappointed. 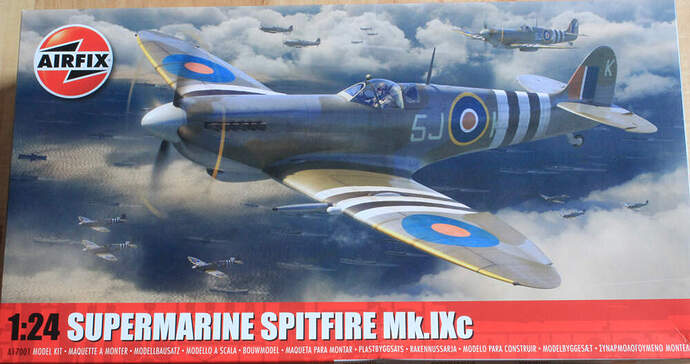 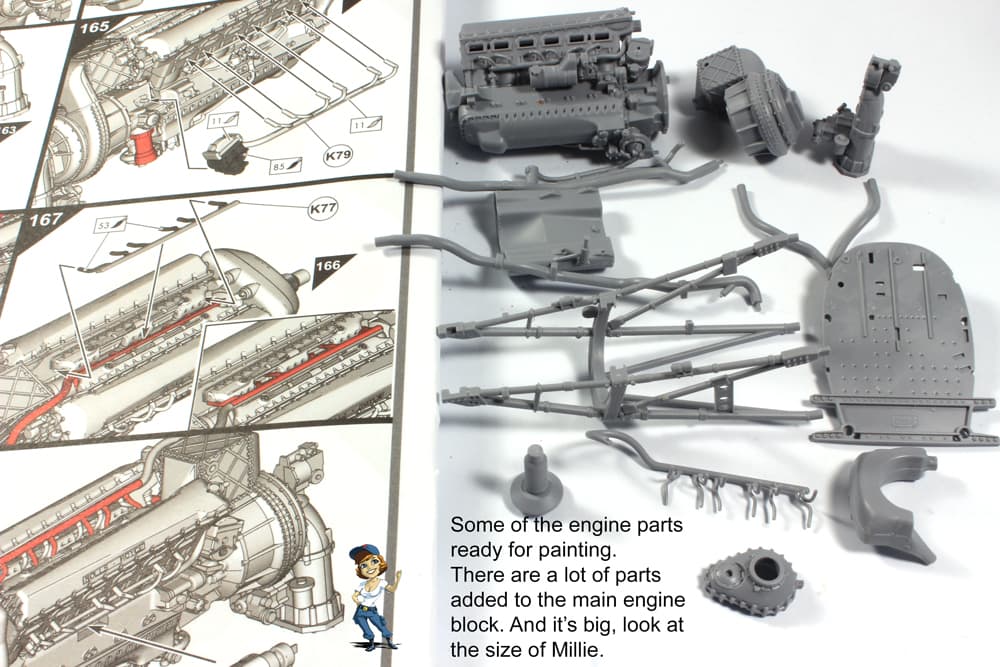 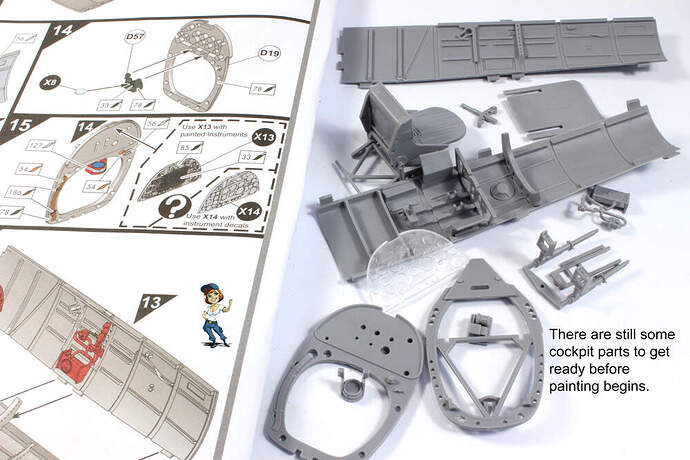 I looked at getting this kit, as i’m really not a fan of Airfix - but had been assured they were ‘back in the game’.

It might sound petty, but the cockpit instrument panel put me off completely. If Eduard or somebody else produced an AM set with thie usual level of instrument detail, then I might consider it, but its really something Airfix should have done much better on what is, let’s be honest, a ‘considered purchase’ given its price.

Who said size doesn’t matter lol … This will need a display table all of its own Mal if you take it to any shows !! Will be following along

@Holdfast
I’ll be watching this one Mal - who’s decals will your be using ? LOL

Following vicariously, Mal… And a with a hint of envy

OK, there’ll be more for me then.

The kit instrument panel might not be the best but it works and with care will look really good. To discount this kit for that single piece is up to you but you are missing out on a great kit. This will build up into a really great model.

It’s not as big as the Typhoon and I intend taking both kits to the next show that I attend.

It will be impressive though.

I’m planning on JE-J but, as I can choose any scheme for a Mk IX I may do a different scheme.

I’m hoping Eduard or Quinta will do a 3D printed set for this kit to greatly enhance the cockpit! The crowbar is only red on preserved warbirds. My kit has taken its place on the shelf waiting for the Aftermarket updates to finally put in an appearancee

One of Eduard’s regular cockpit detail sets would sell this to me.

The kit offering is an insult considering it retails at around £85.

Eduard are now heading down the 3D route after the success of the truly impressive Quinta offerings, which in all honesty cannot be bettered. The kit cockpit is disappointing and i won’t be building it until such time as some decentcaftermarket sets come out for it.

@Whitwolf.
I always paint the crowbars in Spitfires red. I asked Geoffry Wellum what colour they were and he told me that they were red in every Spitfire that he flew. So I paint them red in homage to him.

Just a few more parts taken off the sprues ready for painting. The Wing interior assembly for the spar, wheel wells etc uses itself as a jig before the glue is applied to ensure that the spar is doing its job of maintaining dihedral, among other things. The undercarriage legs have positive fitment via the spar. This all fits very well. I’m planning on having one of the cannon bays open, and there are even heating ducts. 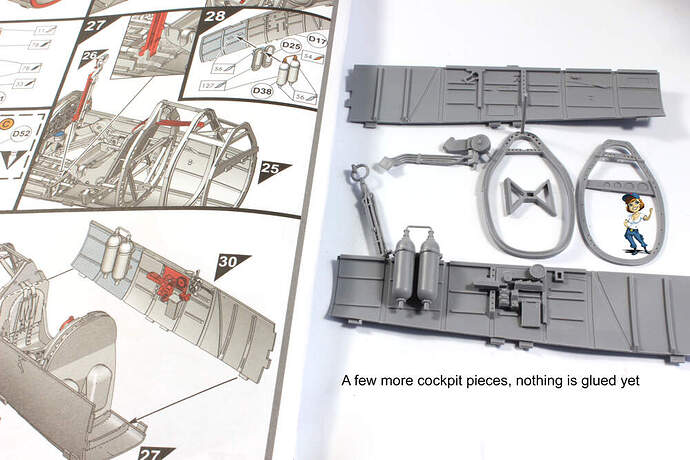 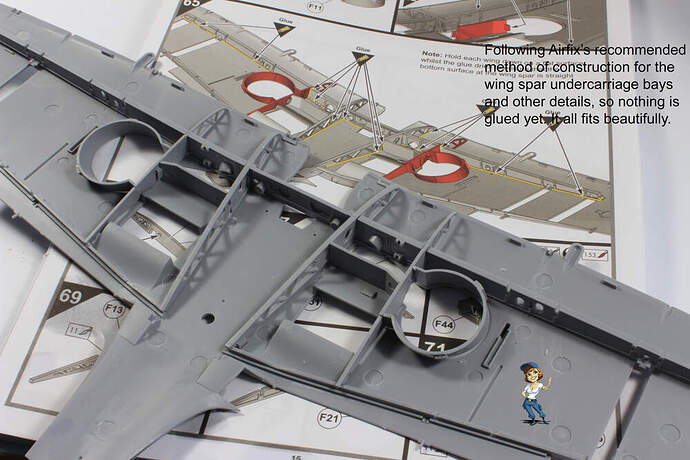 The detail is great, and the outer skin even has the oil-canning effect. There has been a lot of thought gone into this. But like every large-scale model you can always find something that you can add, pipes, cables, paint masks!

The ease of build makes this kit for me but I am having to think of how I can paint the cockpit as some parts are multi-coloured and I want to airbrush as much as possible.

The IP is pretty lame…but the exhaust are a complete joke!!!

Send it to me.

@Holdfast Not my scale but I’ll follow with great interest anyway. I love that Airfix does these 1/24 “flagship-models” every now and then even if I doubt that I ever will get around to build one!

1/24 isn’t my scale really but it’s a Mk IX so it had to be done. Regardless of some slagging it off for small things that could have been done better overall, the kit is wonderful. These gripes are not appreciating that Airfix have to make design decisions, like all model manufacturers, and it always seems that Airfix gets more criticism than most. Tamiya fanboys won’t criticise them like I won’t criticise Airfix. That’s because Hornby has dragged Airfix from the depth and is still really trying to make it viable, which is why it erks me greatly when they get slagged off. There is a series on TV that gives a real insight into what Hornby and the Airfix designers are doing. I think that the last of this latest series will show the Mk IX. I’m waiting to see if the design decisions about the IP are mentioned. I do think that it was about making the kit for all modellers, not just an elite. But we will see, I’m loving it and I have bought an IP upgrade and seatbelts, because I want to add that detail, not because I see anything wrong with those kit offerings which allow a reasonable look without adding to the cost.