AK Interactive - Anyone fired for the initial "Condemnation" marketing fiasco?

AK Interactive - Anyone fired for the initial “Condemnation” marketing fiasco?

Checking out some of the excellent figure painting videos on Small Soldier Adventures in Miniature I discovered in September 2020, AK Interactive had done book called “Condemnation” that had a marketing fiasco.

Apparently the original add campaign complete with tasteless videos was pulled and intense backlash from the modeling community forced AK to apologize and revise the book.

Allegedly the initial version of “Condemnation” had an article of how to model gas chambers using AK’s chipping fluid that was removed after the marketing campaign blew up in AK’s face.

I’m not much for social media or AK’s products so had zero awareness of the event.

Anyone know what really occurred and if anyone was held accountable? I would like to know a factual account of what occurred. It will simply determine if I buy Mig Ammo products instead of AK’s on the rare occasion I buy weathering products.

Not looking for political debate.

I think we all condemn crime against humanity and the evil philosophies that accompanies that sort of hideous action.

Anyone know what really occurred and if anyone was held accountable?

Typically we never hear from most companies what happens or doesn’t happen with employees. I would expect the same here.

Personnel and disciplinary decisions are typically internal matters and aren’t made public, espcially given the concern with privacy (and the lack of it in today’s online world). There were questionable decisions made at many levels, just leave it at that. Whether someone’s employment was terminated over it really is no one’s business beyond the parties involved. Buy their products or don’t, theirs and Mig’s are pretty similar according to what I’ve heard in feedback from customers.

AK didn’t hesitate to make it clear Mig J was out so obviously they do comment on that sort of thing.

Yes, but that was more like a change over in management then say X employee is no longer employed or has been punished.

@Uncle-Heavy, Robin I don’t know how many employees AK has currently. I seem to recall from prior discussions about AK they have at least four or five.

Given this specific snafu had the potential to significantly damage the AK Interactive brand, I expected more transparency than the “form letter” explanation and eventual apology.

BtW did anyone see AK’s original marketing for the book in question?

Found two discussions to read regarding the AK incident.

“At least four or five” ummmmmhummmm
Wanna bet 5 cent that the manager was involved in the marketing planning?
With 4 to 5 hundred employees there could have been a marketing manager but not with a company with less than 10.
I suspect the boss will not fire himself, on average they tend to not fire themselves …

Seems to me the company was trying to bring awareness to a topic they felt important related in our hobby and failed at the attempt. Folks are free to choose how to spend their hobby money.

There’s a big difference between glorifying the brutal aspects of an era and documenting them.

Even allowing for Spanish to English translation issues, at the very least AK is a spectacular failure in tasteless “edgy marketing” in the way they initially addressed the topic. 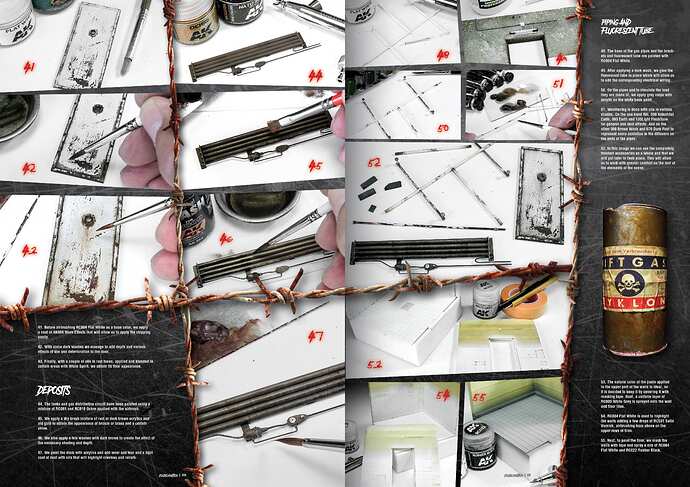 I recall the laughs we had at AK’s expense when we learned about it. Apparently Great Hobbies (which is arguably one of Canada’s biggest carriers of AK) was on the razor’s edge of terminating our relationship and going with Ammo instead.

Speaking as a site owner that has published features on the holocaust or other atrocities I think it’s a pretty fine line between people seeing it as publishing ‘artistic’ works marking history, and other seeing ads on a page and thinking the publisher is a greedy capitalist and the modeler is just trying to be ‘edgy’.

Personally I think this is much ado about nothing. The book (at least the revised edition I can see) is tastefully done. If you don’t like the subject matter that probably has more to do with your own personal choices or preferences, not because books or works like this should never see the light of day (or print). Could AK have marketed it better at the onset? Sure, but that is probably more to do with Spanish to English translation problems than anything else. Even that first Reddit post starts off with that quote that seems like he wants to take completely opposite of the way it was intended to be taken. That’s sort of the problem these days isn’t it? Everyone always wants to assume to worst in people and jump on the blame train.

Not sure if I admire their daring to do it or pity their inability to predict what the response would be. Whole thing is fascinating, though personally I don’t think it is worth boycotting the company over, since it’s now history and no doubt they have learnt the hard way what is and isn’t acceptable.
Seems they were intending to donate some of the proceeds to a charity, as someone in that Brit Modeller forum mentioned might have made a difference.

I have proof of everything I claimed. I could easily back it all up if I need to.

But you wanna call me out and lock the thread so I can’t?

I have seen both copies of the book in question side by side . While some of the work shows incredible skill , i can say that overall as a modelling tool the book was a failure.
As a publicity tool it was a huge success… After all we are still talking about it.

But not all publicity is good publicity. Ask Gerald Ratner…

Sounds like the making of a Telenovela and here I thought just decal companies where drama llamas, seems the lure of easy

to aftermarket industry draws them all in.

Point 2 - I think your post sums this whole situation up quite nicely, and you’ve summarized what a great deal of people thought when they saw this book. To my mind, I think a detail that is often overlooked about this whole fiasco is the amount of work that had to go into making this book. Modelmakers had to make the dioramas, someone had to actually write and arrange the book, then you’ve got editors, publishers, etc. I find it ludicrous that nowhere along this long chain of people involved did someone say “hmmm, perhaps a guide on how to accurately chip your Zyklon B canisters is not going to be a huge hit with the modelling community.” Seriously, who on earth did AK think were going to buy these books?

Rant over, thanks for attending.

I’ve had mixed feelings about this whole thing but Dennis you hit the nail on the head in your second point.
There’s a lot going on here; the historical aspect of these unspeakable horrors, the reluctance/ desire to bring them to light and not ignore them, the things that may not have gone over well due to the language barrier etc and the hobby aspects of it which makes it all uncomfortable for many.