Just interested. Did anyone buy any Border Models 1/35 aircraft yet? There was some excitement last year over this among armor modelers … not so much among aircraft modelers! Any dio’s yet with an aircraft and a tank?

Been away from the hobby for a few months and didn’t realize the Border Model 1/35 Bf-109 had released, thanks for the heads up!

Will order one from Sprue Bro’s.

I was looking up BF-109 the other night, and stumbled across the border one, wasn’t aware they released one. I knew about the Stuka though. tempted to pick up the 1/35 Bf-109

Most of the comments from model AC builders was less than luke-warm to hostile was because if you just want a display model there are already much better 1/32 models available, along with an AM infrastructure as well as 1/32 crew figures. As yet there are no AM products, not even alternate decals, for 1/35 AC. It would be like Tamiya, or Trumpeter, starting a whole new line of 1/32 tanks and vehicles to try to entice AC builders to armor.

I do t see it as trying to entice armor builders to AC, but rather border finally offering something to go with all those 1/35 grounds crew and truck diorama possibilities. There are airfield components in 1/35 but not many aircraft

I’ve been able to get up close with the sprues at work. They look amazing, and though I’m not sure what the deal is with part fit, the detail looks insane.

I have 2 bf-109’s. Haven’t built one yet but the moulding is excellent. I have also just bought. Ju-87 but it will take awhile to get here HAD models do a couple decal sets for the 109. & l expect they will do the Stuka as well.

HGW model do a set of seatbelts and cockpit masks.

D-Day Miniatures has announced a great set of figures for this kit including Franz Stigler - that alone makes me want to buy this kit.

And don’t forget that many kits are already relevant for accessories, like the Kettenkrad, trucks, staff cars, etc. And things like seatbelts in 1/32 from the likes of HGW, Eduard and such could be adapted easily. I do expect that we will see a few things like Eduard instrument panels, resin wheels, etc. at some point.

As I recall, The same was said of Tamiya and 1/35th scale many years ago. Now the standard is 1/35th. If Border made 50 different 1/35th aircraft and they were good kits, I think 1/35th would become a standard scale for aircraft.

"In the mid-1950s, foreign-made plastic models were beginning to be imported and wooden model sales were decreasing, so in 1959 they decided to manufacture plastic models. Their first model was the Yamato. However, Tamiya’s competitors had already sold Yamato models at 350 yen. Tamiya was at risk of getting into the red by setting the same price as the competitors. This cheap price led Tamiya unable to recover the cost of producing metal molds, so once again, they changed their products to wooden models, but at that time the model trade’s tide was turning toward plastic models.

Using metal molds no longer needed for plastic toys, they released a racecar mini-kit, which was to finance the production of their next plastic model. To their good fortune, it became a hit. They decided that the second plastic model was to be the Panther tank, which had a linear form which would make the molds simple to produce. They commissioned Shigeru Komatsuzaki (ja) to do the box art. The Panther was motorized, moved well, and had a clear instruction manual which made it easy to assemble. Because of this, it gained a good reputation. The model was made in a 1:35 scale, later to become a standard scale modelling scale for military subjects, because it was decided that tank would use a single TYPE 2 battery but would hold two of them."

I didn’t know Stuka was already out. I have been waiting for that one and do plan to build it in some kind of dio scene with military vehicles.

I ordered mine from AliExpress in China, like a Chinese eBay. It was £30+£8 postage. It’s a great site for kits made by Chinese companies.

Yeah…but why a new “standard” scale for aircraft in 1/35, when there is already a well-established scale of 1/32? Would be like a company trying to renew 1/32 as a “standard scale” for armor. Would that please current 1/35 armor modelers? Incompatibility can be a beeyotch! But…as long as the manufacturer is willing to take the risk!

One great reason, it upsets the status qo.

I kind of wondered why aircraft manufactures went to 1/32 instead of 1/35, seemed like a weird choice given, a lot of aircraft model companies also make 1/35 staff cars and such that would go great with 1/35 aircraft

Not yet but I will in the near future. Likely the Ju-87. Very curious to see how successful this venture will be and what other subject they produce.

Apparently, 1/32 (54 mm) was a standard scale, or “traditional scale” for models and figures long before 1/35, with a few aberrations such as Revell/Adams 1/43. True (proportional) 1/35 only evolved from Tamiya. The same could be claimed by 1/48 (1/4 ") modelers as that scale was a traditional scale for ships and sailing boats. Presumably, 1/32 was maintained for model aircraft as it was just big enough to include better detail…of course there’s also 1/24 scale aircraft!

The easy scales for us metric dudes would be 1:50 and 1:100 (many museum models use these scales but they are mostly useless since there is so little commercially available to compete with all the 1:48, 1:72 and 1:96 products out there)

Arrived yesterday! Looks pretty sweet in box. As long as the fit is decent, I’m happy with the level of detail & accuracy. 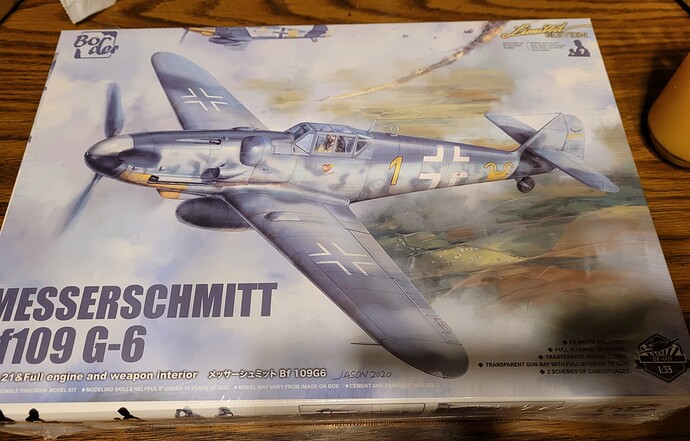 Woot, can you hear the Roar of the engine?

So what was the standard/most popular AFV scale before 1/35th?