Im looking for opinions on what, in member’s opinions, are the best (quality, features etc) kits in 1/35 of the above 2 vehicles fielded during GW 1 and 2.

Any opinions, advice would be appreciated.

As far as AAV-7 goes, Hobby Boss would be the best choice, although I haven’t tried to build one. I do have a Tamiya LVTP7A1 and it’s a mixed bag. I don’t know if they ran out of budget or some Manager said, “Ship it!”, but it’s weird kit. The hatched can be opened but there is no interior. The optics on the hull are solid yet the ones on the turret are open, but there is no clear acetate or clear part to go in them.

At least with Hobby Boss, they provide interior parts plus a lot of variety in the kits. I intend to buy one in the future.

I agree on the AAV-7. Hobby Boss’ are the best and come with full interiors. They have pretty much every version as well; from LVTP-7 through the latest AAVP7A1 RAMS/RS.

Thanks Gary and Gino.

Gary, I have that Tamiya AAV to build, having nearly finished HB’s AAVR.

Based on what I’m hearing, maybe I should put it on fleabay?

As the guys say, go with Hobby Boss’s AAVP-7 A1. The Tamiya kit has very simplified details and in places missing or incorrect. The AFV Club kit is the HB kit

Cheers Peter, the RFM ODS M1 was ordered last night. I also need to find out which was the earliest model of AAV to be fielded in ODS.

The HB AAV c/w weapons station and slat armor (shudder) should work for OIF and as you guys have said RFM’s M1A2 SEP or similar.

…which was the earliest model of AAV to be fielded in ODS.

During ODS, the LVTP-7A1 (with square headlight insets) was the version in use. They were still known as LVTP-7s then, even though Hobby Boss calls them AAVP-7A1s. There were two types as the USMC was in the middle of an upgrade at this time. Hobby Boss offers both types. 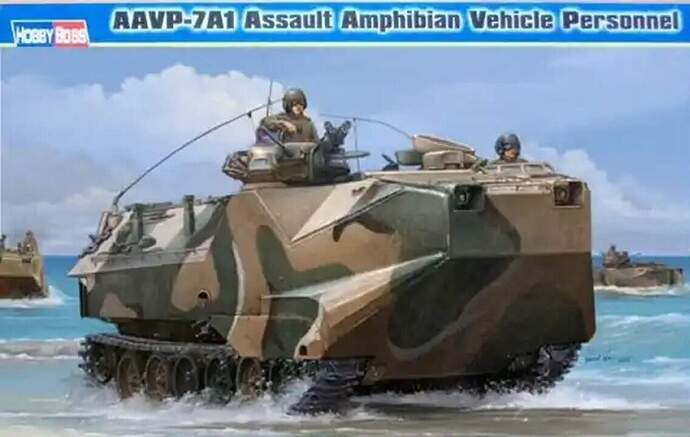 The newer version was the LVTP-7A1 w/UGWS (Up-Gunned Weapons Station), which is a larger turret w/the .50 cal and a 40mm grenade launcher, it also incorporated a bow plane. Hobby Boss #82412. 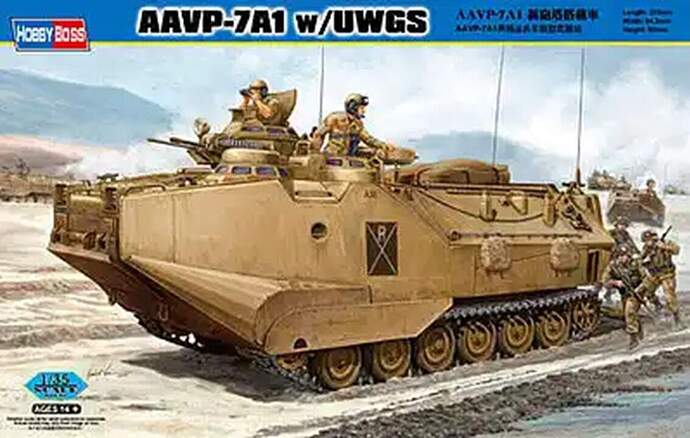 They were about equally distributed across the USMC and both were used equally. Either one represents an ODS LVTP-7A1 well.

Dammit Gino, now I’m spoiled for choice! I should go with the earlier one but the UGWS looks great too.

Thing is, I’m finishing off the R version and it is such a cool-looking track. I’d like to build all of them but if ever we had to downsize I’d be in big trouble!

Maybe @AmTrac1833 will surface again but until then he has some good advise for you in your other tread about how to fix the HB kits for GW1.

Just finishing my M813. Its been an interesting ride this one. On to a straightforward Tamiya AAVP7A1 next. Any info in it.

Thanks Tank. I went back to that post and it has good info from amtrac.

Thanks for the info. I’ll look it up.

I’d like to build all of them but if ever we had to downsize I’d be in big trouble!

Yes, the problem we all face. I recently had to empty my modeling room for remodeling (new floors and painting of walls). What a pain in the ass it was. I am considering adding more shelves when I put it all back though.

I hear you. I’ve got shelves in the (large) furnace room. Probably never get a spare room that big again.

On AAV-7, what color are the crew station vision blocks? Ive seen blue and green but……?

Thanks @Tank_1812 I definitely concur with going with the Hobby Boss offering. Much better detail. I’ve seen pics of LVTP7 stating it was from Desert Shield/Storm but I’ll have to dig through my library to find those again. What I know for sure was in service were the 7A1s. There were some with EAAK, some with P900 armor, some had bowplanes, some had UGWS. There was a mix of all sorts mods in service that had not yet completely become standard. Best advice is to find a good picture of the vehicle you want to model and move on from there - except for the P900 armor unless you are up for some scratch building.

As far as nomenclature, they went from LVTP7A1 to AAVP7A1 however, the data plates remained “LVTP7A1” until the vehicle went through the RAM/RS rebuild in the late 1990s.

Of course the kit isn’t perfect. The driver station needs to be reworked, the panel needs to be upright and the gear selector needs to be moved down. The seats also appear to be just the “pans” without any pads. All are missing the radio equipment. For pre-SINCGARS the radios were mounted behind the radio cage, starboard side in troop compartment while the amp was located against the wall near the turret but almost level with the longitudinal drive shaft covers. The antenna cable conduits that are molded to the upper hull are for SINCGARS which means they need to be removed for anything pre-1995.

The vision blocks have a blue tint to them. I have an older one that shows this really well. Newer blocks have a metal case/sleeve around them. 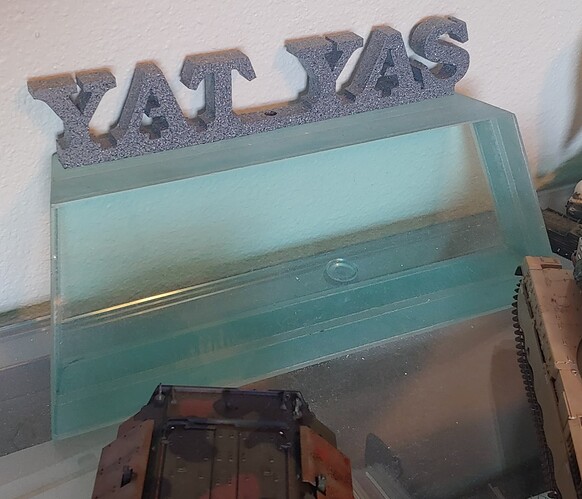 I’m working a Hobby Boss AAVP7A1 and a Tamiya/Academy/Hobby Fan LVTP7.
I reworked the driver station and added padding to the seats. 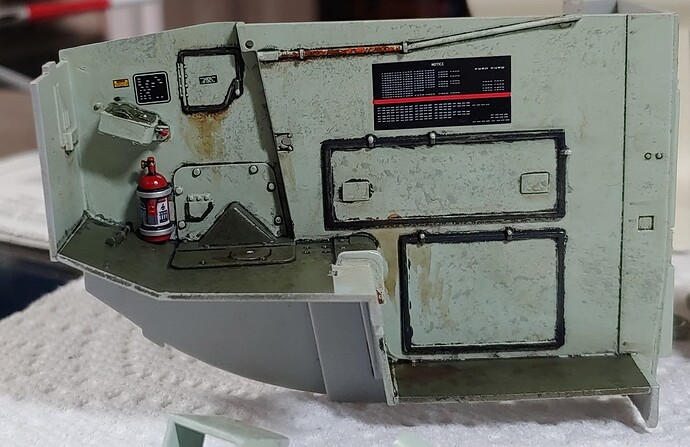 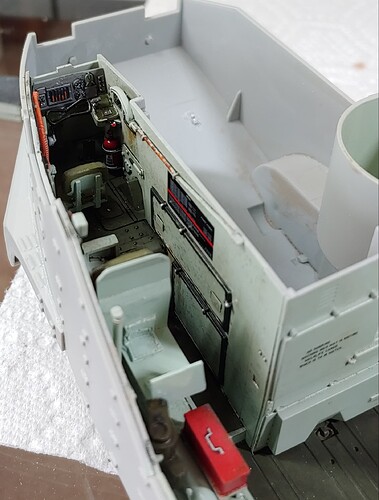 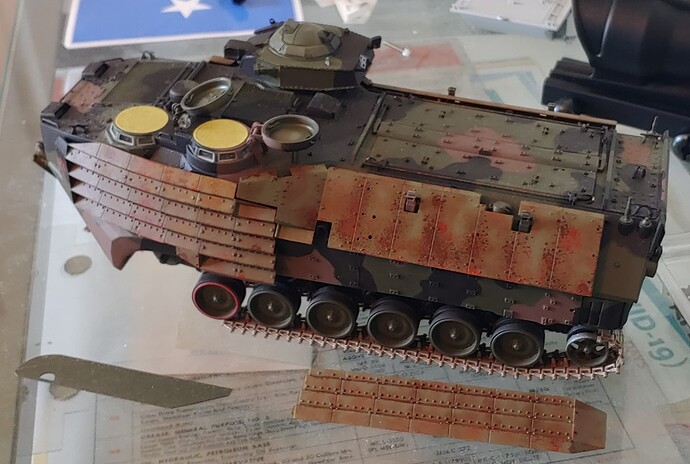 The Tamiya kit is still an enjoyable build due to its simplicity. You’ll notice the Tamiya kit is smaller than the Hobby Boss kit too. The one I’m building is a “Franken-Hog.” It was an LVTP7 that received many mods as a test platform. Bowplane, EAAK, UGWS, Bradley suspension and dual cargo hatch supports to name a few. 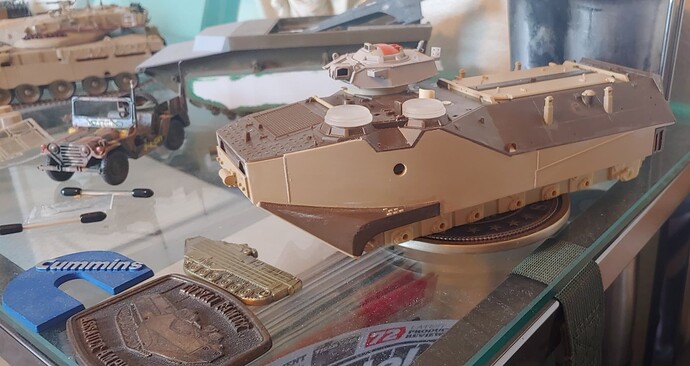 While my time was after ODS, I have tons of pics of 7A1s if needed.

Excellent attention to detail there IMHO. Lets me know how much could’ve been added to my recent AAVR-7 build :

Id certainly be interested in any pics you can share as I will be building OIF vehicles in time.

@Stryker45 the P900 did not last long. By time I got to the FMF all that was left was being used as the grills on BBQ pits made from used 50gal drums and grates over wash ditches. It was easy to tell which AAVs wore the armor though as the scars from cutting and grinding away the mounts were deep enough into the hulls to be clearly visible. I had to dig through the folders but several pics. 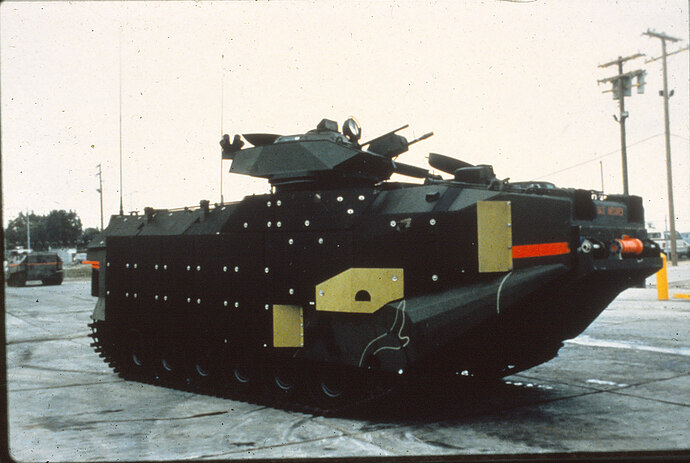 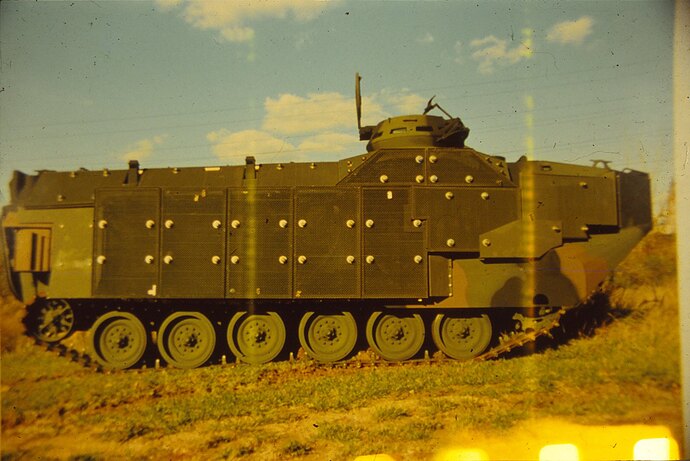 I bought several sets of the M113 Zelda PE just in case I get froggy enough to model one of these.

@Denimo I do not have many pics for the R7 I can definitely assist with OIF P7s.

Other item I forgot to mention about the Hobby Boss kits is their sprockets. For the pre-RAM/RS 7s, the kit sprocket does not look anything like the real thing. I haven’t found a replacement nor do I have the talent to draw it for 3D printing. 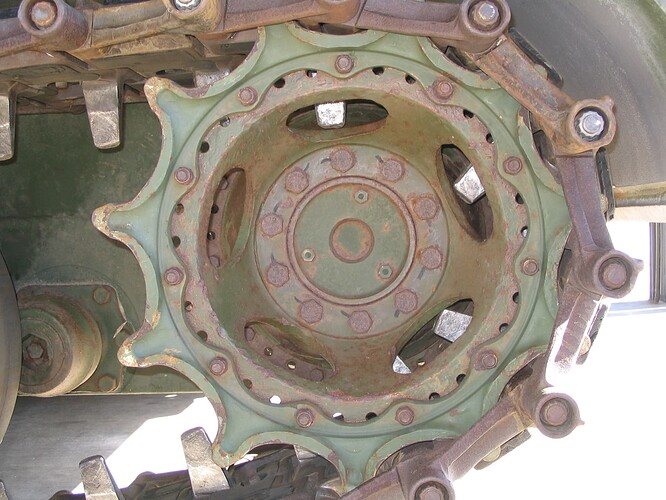 I haven’t found a replacement nor do I have the talent to draw it for 3D printing.

Have you talked to @James_Lee? He has done some M48 sprockets.