There are some photos here that might give you some inspiration: 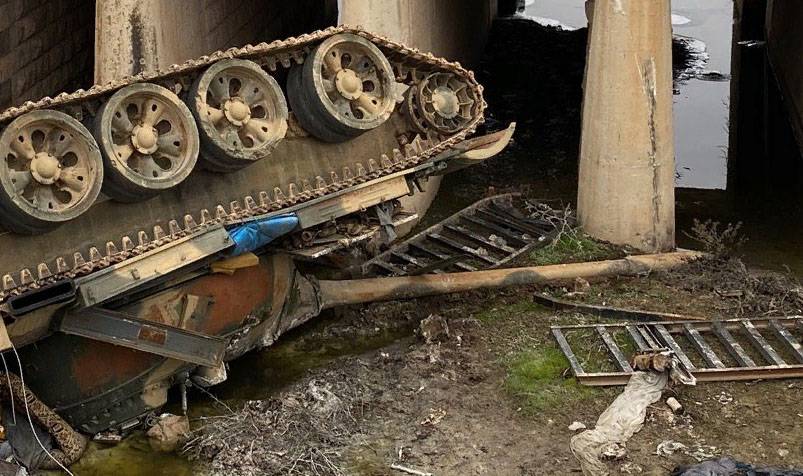 Non-combat loss: CAA tank fell from the bridge in Idlib with the crew

Syria receives reports of a non-combat incident with a tank of Syrian government forces. Several photographs have been published on the network, where you can see the CAA tank lying under the bridge. The captions to the photos indicate that the tank,...

Oh yeah the wash is great John, just right & as Don said the lump’s transformed - particularly that first image where, if you took out all extraneous visual references the viewer would be hard pressed to say how big it was. Also agree with Peter’s slimey suggestions but I’d also urge you to try darkish dry powder paint or pastel dust with a fine brush (rather than using fluids) to get the streaking, it might be a revelation if you’ve never tried it before

Thanks @Canmedic @petbat @Dioramartin for the feedback and great suggestions, that was exactly what sort guidance I was looking for

Oh yeah John the before photo looks like a lump of clay compared to the after, which is beginning to look like a concrete block. The other guys have already made all the suggestions I could make; you are on the right track and making the right progress!

Thanks Matt, the wash was a bit of luck really in getting the ratio right just using a MK1 eyeball… Just need to get the finer weathering looking right

Made a start on the Conqueror. What a beast of a machine; it is huge.

Anyway started with the Step 1 which was the suspension as usual. The kit comes with 2 suspension options, an all in one moulded piece or separate arms and a spring. I felt the spring was a bit anaemic for such a beast, so decided the all in one was a better option. I commenced removing a large section underneath the spring where there should be a void. 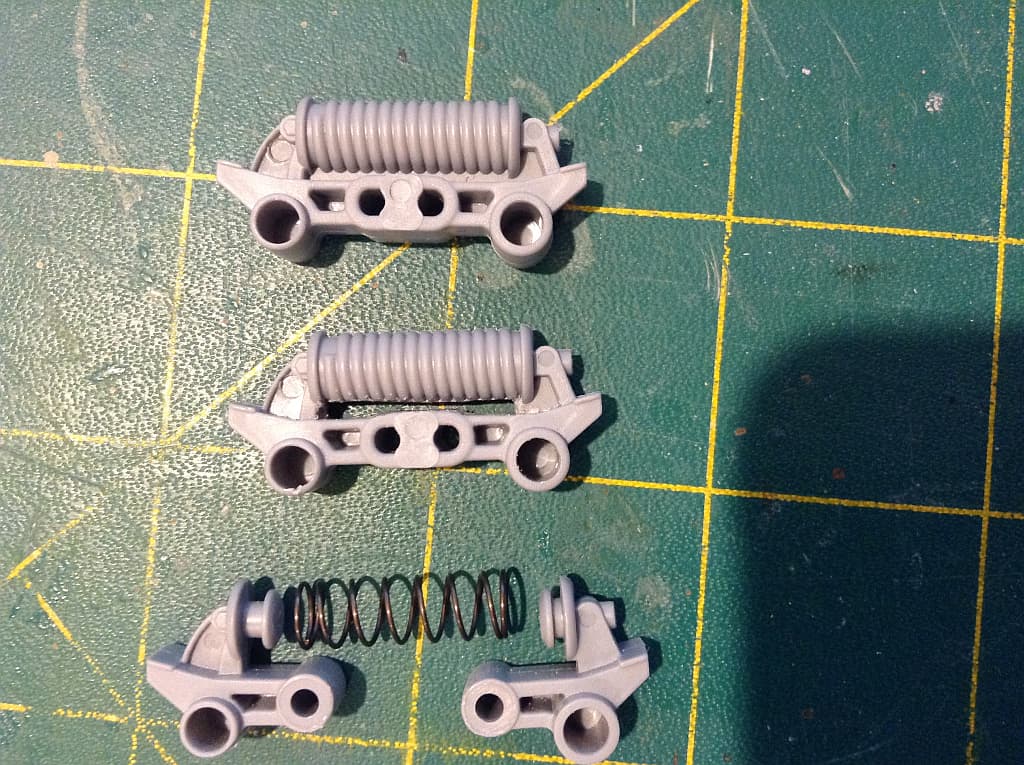 Having done that, and knowing much of all this will be covered by side armour plates, I did a test fit to see just how much was visible and if carving out the void was worth the effort. It was then I realised that the ride height of the solid one piece seemed off. The armour plate should sit just over the top of the road wheel: 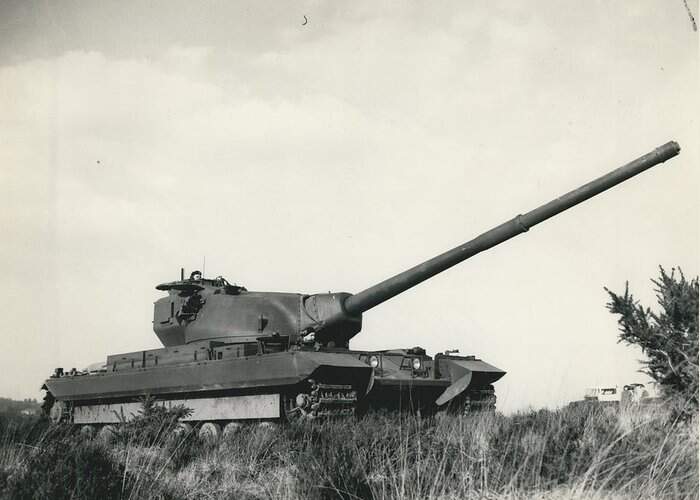 However, using the one piece, the wheels are well below the side armour: The kits spring and separate arms are much better but the side plate isstill a tad high. So I made my own springs. They are positioned much better - see the front set in the pic: 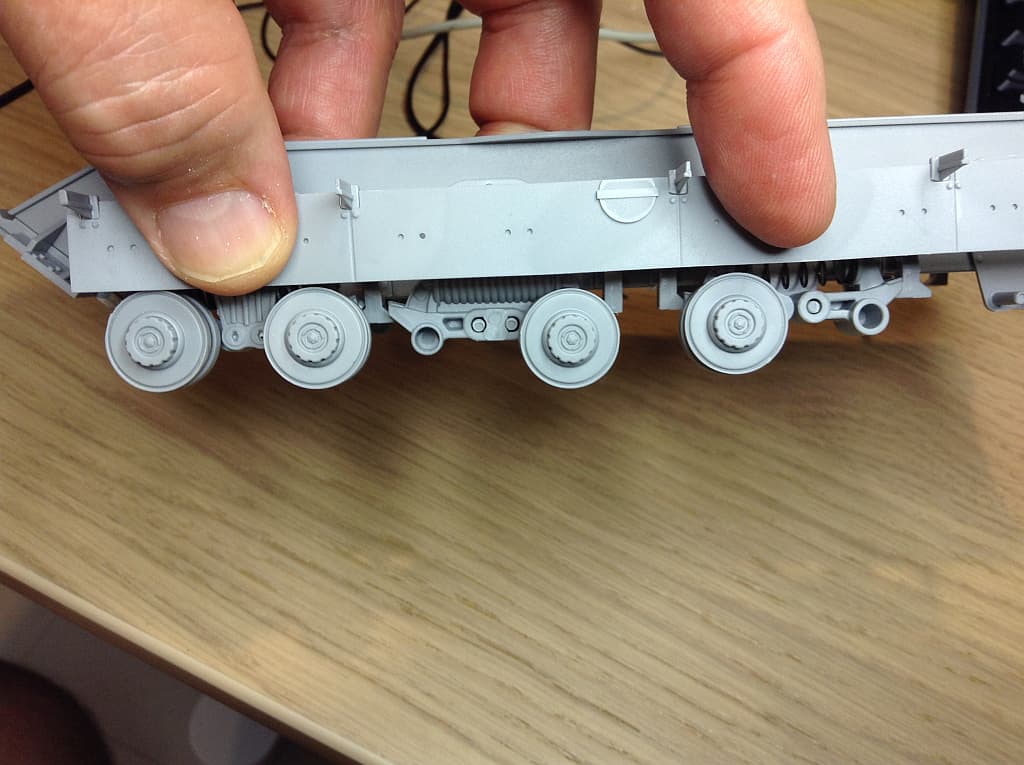 They also look beefier too, but really you will not see much at all of them. I could have shimmed up the separate arms and just used the kit springs in the end. I’ll remeber that next time. 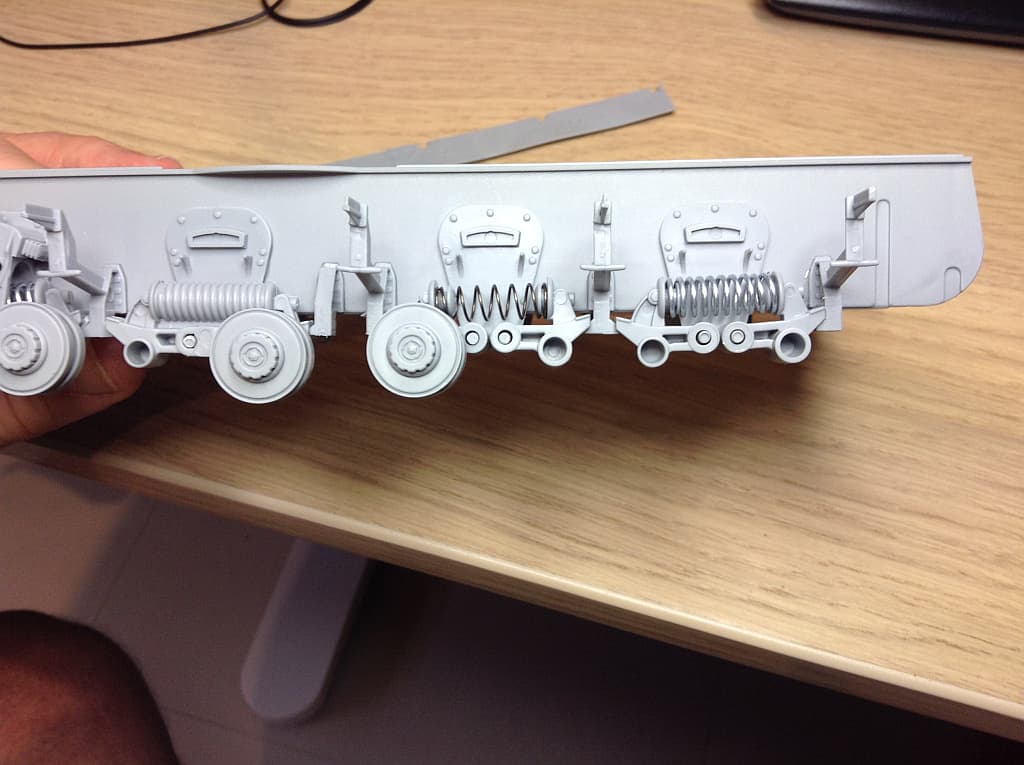 Good start and that’s the benefit of a dry fit to give it a once over. Nicely made springs as well… Had you already made all the replacement springs or will end up using shims and the kit ones ? I suppose it comes down to what is actually going to be seen on the finished kit …

Nice work Peter. Your scratchbuilt springs look MUCH better than the molded springs or the kit metal springs.

Thanks guys. Yes John, I had made all eight before I added the front part of the suspension and tested that. It was a simple matter of wrapping two strands of garden wire around the metal rod from one of my etch roller sets. It was the exact diameter I needed. Wrapping two strands together gets the even distance between coils and all you have to do is unscrew them to separate them.

Now have both concrete bridge ends with the good light wash applied. Going to look at the options for the deep weathering like the water lines, moss etc
Will apply more washes to the wood parts of the bridge over the next few days. Back on the range tomorrow for some gun fun so hope the weather holds off… 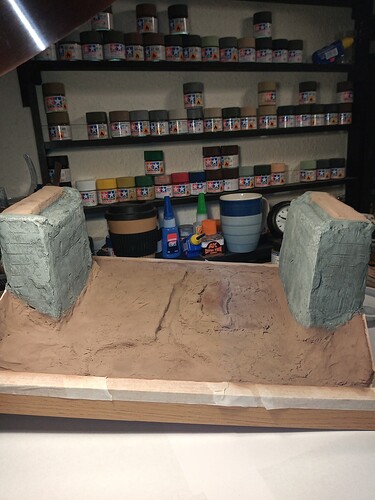 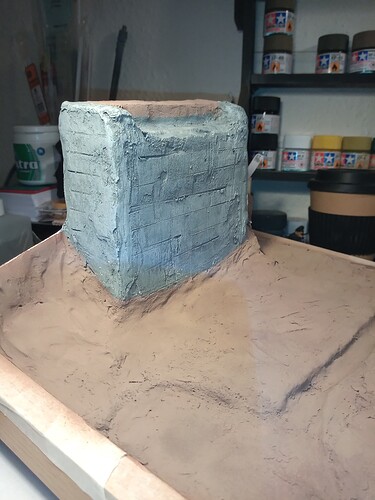 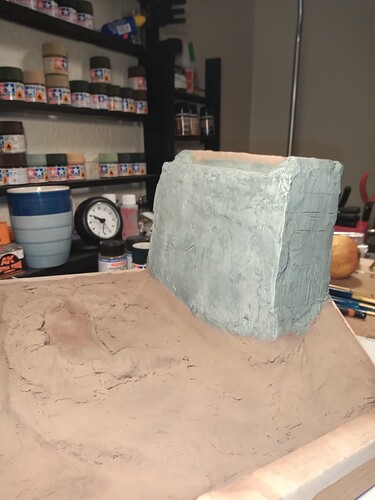 Quite pleased with the look so far, more work is needed but this seems like a good base now to start adding details. Next will be the real dried earth sprinkled on the ground areas.

Decided to get back onto the Panther and apply the green cam. 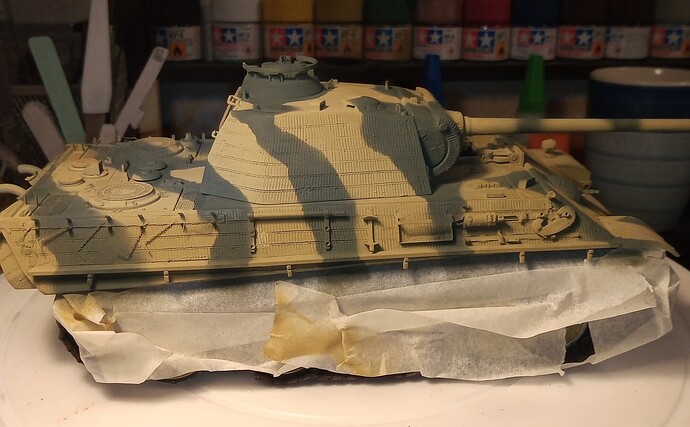 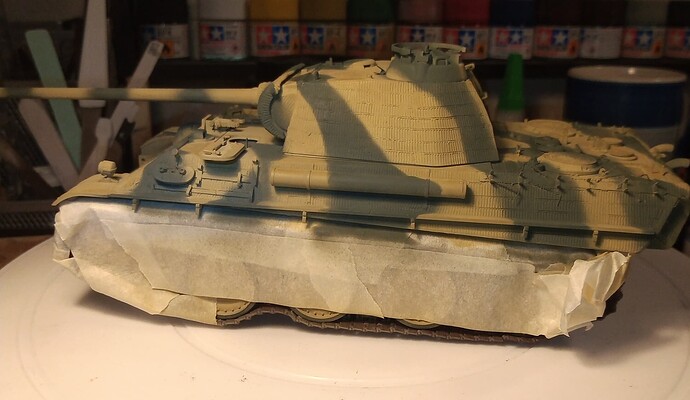 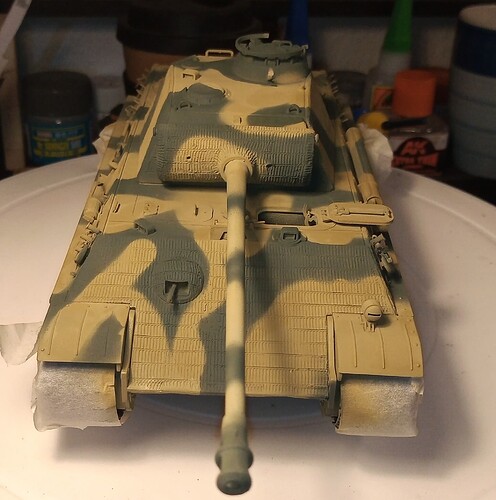 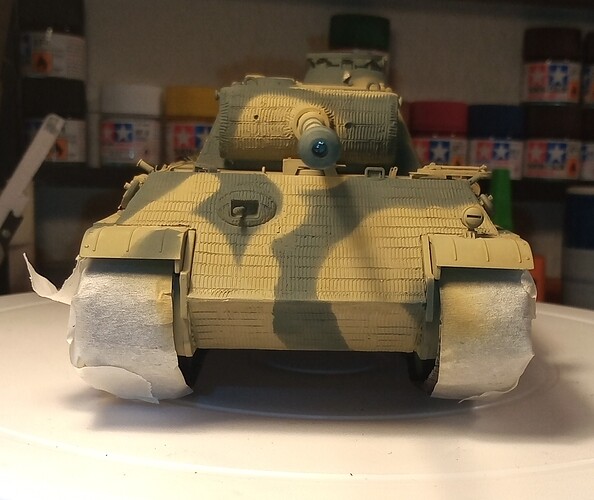 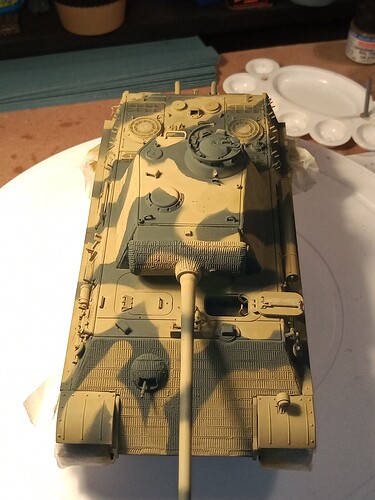 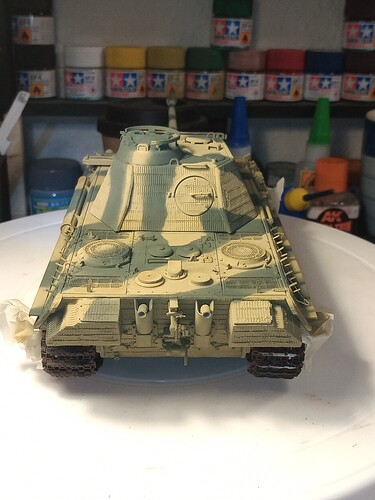 Just used Tamiya xf 65 field grey and made up a random pattern.

I didn’t do the lower hull rear panel as it’s going to be buried.
Only decals it will have are the turret numbers and a few washes.
Still need to apply the various areas that are damaged but I want the paint on first before I started that process…

Looking great John.
In my humble opinion I think that the exhaust and stotage bins on the aft should be made damaged, as after all they carry the whole 50 tons of the tank on them

Gil, its a valid point if that area was going to be on show, but in this instance, the whole rear end will be hidden from view with how I’ve done the groundwork and I will be adding some smaller bits of debris to hide any areas I missed.

Thank you for the input. Some collate damage is bound to show around the aft section, but again my opinion
The build, tank and base look awesome, and will expectantly look for to it

Have now started to apply the dried real earth on the groundwork.

I ended up using neat PVA glue on the groundwork then sprinkled the dried earth over it. 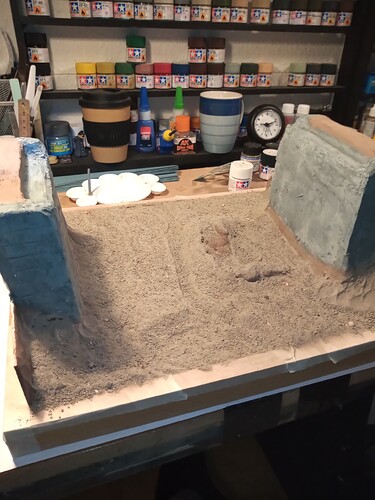 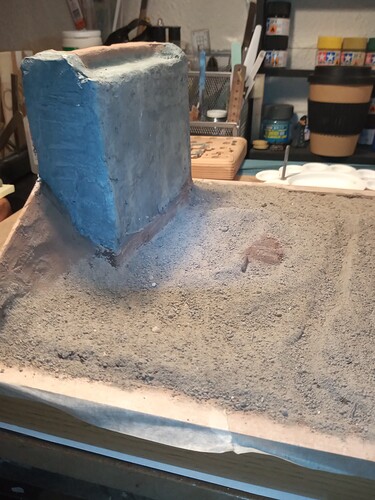 The groundwork has lost a bit of it’s definition with all the earth sprinkled over it, but that will be coming back once the excess is removed tomorrow. After I have done that, I will do the same process on the vertical and sloped areas that need the earth and then let that dry. I will also use the earth to make a better demarcation line as the river bed rises up the concrete sides…stay safe

Sorry everyone for my absence over the last few days, modeling time has been very slim lately.

I finally finished building and painted the Pzh. 2000!
Thanks to @SSGToms for telling me about these Hataka Orange line paints! They are amazing and with a little thinner spray beautifully!

In a uncharacteristic move I think I will pretty much leave the model like this. No crazy mud or chipping. Prolly a few washes, oil dot filter, some dust colored enamels and call it done. 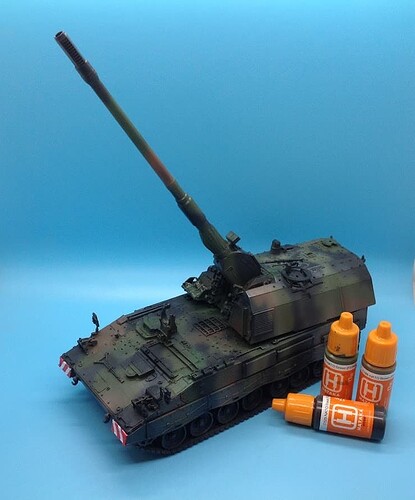 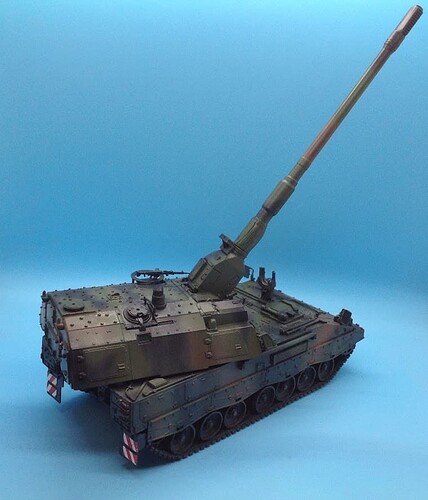 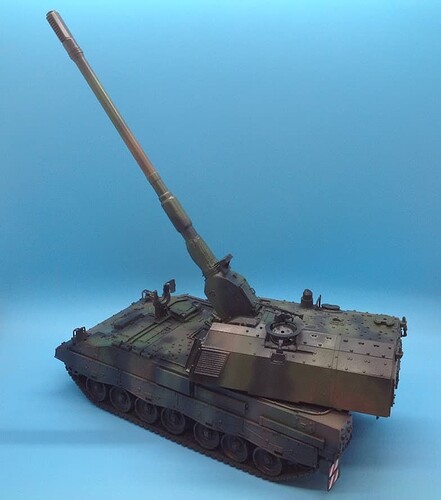 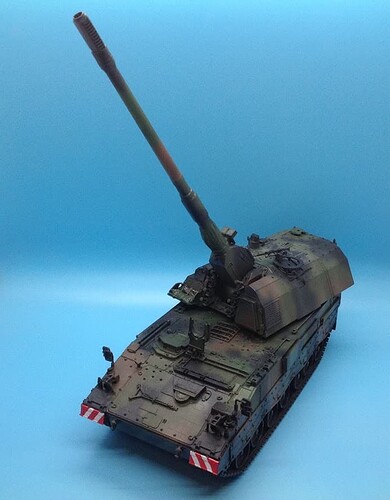 The red and white fenders were all sprayed.
I also added a bit of predusting with a dust colored paint.

As for the decals when I bought the kit they were missing so I now need to buy the Meng kit for them.

Thanks Ezra, and your Pzh. 2000 looks wonderful. And a very nice finish…they don’t always need a heavy weather, and most western nation wagons don’t overly suffer from chipping as the paints are so hard wearing these days. Well done

As for the decals when I bought the kit they were missing so I now need to buy the Meng kit for them.

Excellent Pz2000! And good call on decals - why buy an AM set when you can get a whole MENG kit for them?

Beautiful work Ezra! A nice clean build and remarkable paint work. I’m glad you like the Hataka paints! They do shoot nice.

That groundwork is coming on a treat John, as is the panther,

. However, the outstanding element for me at this stage of your build is the appearance you’ve achieved on the concrete buttress, excellent paint job,