The StuG has the Bulgarian tricolor covering the sloped superstructure armor on the TC side. The flag is inverted(White should be on top), but it is correctly placed if looked from the TC cuppola.

A picture of reg. number В 60504, taken later the same day shows, the wire cutting tool was placed on top of the tricolor to hold it down-apparently the weather that day was quite windy.

A Steyr 640 follows the StuG and some of the damage Allied bombing of Sofia inflicted is also visible.

The StuG is a nice modelling subject and I’ve built it 3 years ago for a campaign on the old site: 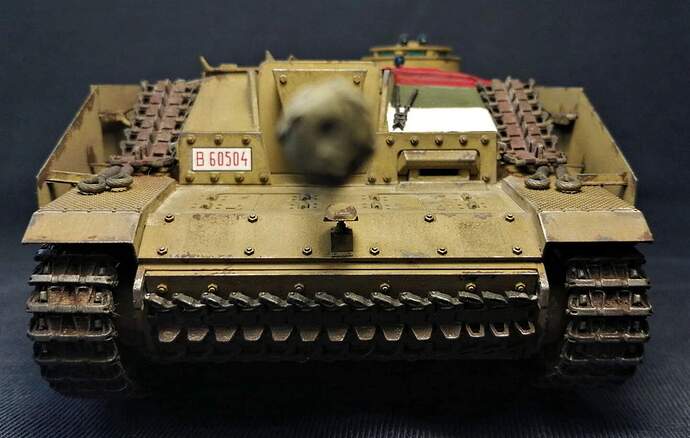 The Bussing-NAG was the second most numerous prime mover of Bulgarian Royal Army(after Pavesi P.4-100), with a total of 72 vehicles delivered in 1941.
They were used exclusively for towing the 15.0 cm sFH 18 heavy howitzers and the 10 cm. sK 18 heavy field guns of Army Artillery Regiments. Because the weight of those pieces exceeded the towing capacity of the prime mover, the guns were towed either in split carriage mode, or as a single load-with barrel retracted.
The BN9b on the picture is the 19th vehicle delivered to Royal Bulgarian Army.

Bronco’s CB35044 is the perfect kit for building a Bulgarian BN9b. A small modification to the rear frame needs to be made, but nothing too difficult- I can provide pictures and info how to tackle this modification to any taker,

I’m happy to be of help, John!

I would like to see more people joining this Campaign, so will post some other teasers too,

The more the merrier I say Angel.

I would like to see more people joining this Campaign

Are any of your local mates like Kalin joining this one Angel ? I haven’t seen many posts from them recently ?

Yes, John, Kalin has joined the group build.
Regarding my other modelling buddies in Sofia, command of English is the big hurdle…

command of English is the big hurdle…

Being an American, I have never let my limited command of the English language hold me back. I can split infinitives, jumble proper grammer and pronounce both aluminum, or aluminium in a truly American way:)

Please let your friends know they are most welcome!

and pronounce both aluminum, or aluminium in a truly American way:)

Wade, how are you with tomato and oregano though ??

Wade, how are you with tomato and oregano though ??

Probably hilarious to non-southerns most of the time

Add some pepper to the mix, that chili peppers
Good mix

Wade,
Theres fixing to be a lot of confused folk down yonder when y’all see what we did with the Queen’s English.

There is always google translate Angel. It is not perfect, but it would help get the meaning across. I have used it myself on other sites where I could not type the native language. If we keep the sentences short the translation is more accurate.

Just a thought, but we would love to see them here, even if only for this build.

I am in for this campaign. I might do a Pz. IV or provide some air cover with a Me 109. Maybe also some captured fighters. I think Bulgaria used some polish fighters - any I will start my research

Nice to have you onboard, Jesper!

Plenty of choices with Pz. IV’s and wingy things!

You can find more info here:

The following is a list of Bulgarian military equipment of World War II which includes artillery, vehicles and vessels. During World War II Bulgaria was a neutral country until 1 March 1941. Then it allied with the Axis Powers until 9 September 1944 and then it aligned with the Allies for the rest of war. On 01.12.1939 the Bulgarian army had 18 256 sabres and 1 059 field knives. On 15.04.1940 the Bulgarian army had 18 298 sabres. The Bulgarian Police gradually eliminated during the 1930s the us...

Make your choice and I’ll see whether I can help you with pictures,

Angel, thanks for the list. I will check it out.

Looking forward to do some research.

Now i have done some research and looked what kits I have in the stash.

Turns out I have both bison decal sets for Bulgarian panzer. I have build the Pz. IV in the past, so this time probably the Pz. 38t.

Still looking to see if I can find decals in my stash for 109Es or 109Gs. I feel I have them, but might be confusing them with Hungarian markings in my memory.

At least the Royal class Avia B-534 from Eduard gives a ton of Bulgarian marking options.

Whatever you choose, Jesper!

I can provide info on Bulgarian Pz.38(t) or “Praga”, as they were officially designated here.

I can ask my “wingy-thing” modelling buddies for Bulgarian “Emil” or "Gustav decals (need to know the scale though) and might send you some, should you choose the Bf-109.

While the Avia B-534 is a nice choice too- I still have to see a Bulgarian “Dogan”(Falcon) built!

So it’s up to you and don’t forget: Wer die Wahl hat, hat die Qual!

Angel, thanks a lot.

I will most likely do the “Praga”, but looking online there are also some super cool camouflage schemes for Bulgarian Bf 109Gs.

If some of your friends have an extra set of decals for an Bf 109G in 1/48 scale I would be very interested. Otherwise just a link to a set of decals and I can buy them myself.