Group Build Description: @Chris_Bryan had originally championed this build but due to some pressing commitments outside of plastic life we’ve chatted and I’m going to reboot this campaign.

The Centurion was the primary MBT for a large part of the “free world” in the waning days of the British Empire. From Korea through Vietnam and the Middle East today, the Centurion has done yeoman service for going on 70+ years. This build is to highlight and pay tribute to that service.

Rules are simple. Any scale, any time, any variant (even paper panzers) just so long as it’s in the service of a country other than the United Kingdom. This can include “what if” users as well (maybe Jamaica decided it needed an MBT). Chris had originally said that builds in various stages of completion would be acceptable so let’s stick with that.

Completion Award: Gong TBD. If anyone has any ideas toss them out there

@staff_Jim did I do this right?

Don,
I for one had totally forgotten about this one. I am sure others may have done so as well. Is it worthwhile slipping the start date to maybe 01 Dec 21 and going for the 12 months from then ?

Works for me. Standby.

Also any idea how I can get the “going/not going” bit to show up for the event?

Now to buy a centurion kit! Might get the Aussie variant from afv club or one of the IDF variants

I think if you go to the original post settings, there should actually be a little option to add that!

fixed! was a mobile issue me thinks.

@kornbeef @Armor_Buff , I think you guys had both expressed interest in the old thread too. Hop on board if you’d like and bring your friends

Excellent, cheers for that … now I have to get a build lol … Im thinking IDF …or the tank destroyer …

Don, on a side note, did I imagine it or do you or did you work at Ex Con in BATUS ?

Imagined unfortunately. I can find Suffield on a map, but my service was strictly in Ontario.

Don,
High marks for the set up of this campaign. You’ve got everything right and added all the bells and whistles. Good luck with it! Have fun!

The TD is super tempting, I’m leaning that way too

Only took me like 33 edits and two computers… but now I know! 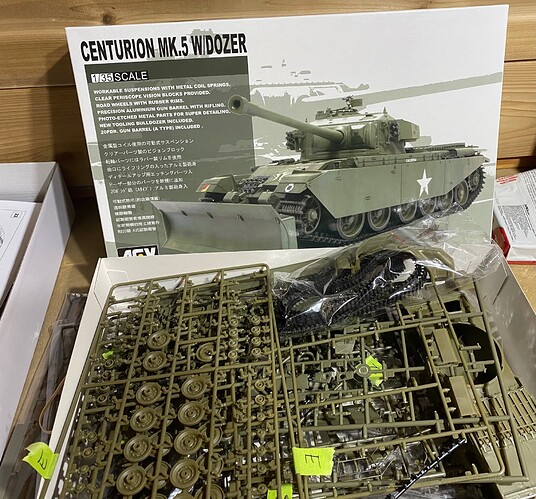 This is what I’ll be bringing to the table. I’ve got a canvas mantlet on the way and I’ll probably end up replacing the tracks as well. Other than that, AFV Club has a nice metal barrel and some PE already in the box.

It’s going to be a Canadian tank but not sure what scheme I’ll end up using yet.

I started it last month based on Chris’ old timelines but I’ll put it back on the shelf for a bit given the new start date.

Don, thank you for the invitation.

Raincheck as sadly I will have to pass as certain taskes are requiring time away from the model hobby.

It’s going to be a Canadian tank

Whaaaaat??? A Canadian tank from you…I am shocked, shocked I say at this radical departure from your normal build habits

If it’s for a year and we’re allowing part started, I might join in with this one.
Somewhere, I have the AFV Club Australian Centurion I started ages ago. Think I assembled the hull and suspension and that was it. Would have to dig it out to check.
I’ve also got one of their Israeli Centurion’s (I don’t remember which version) unstarted.

I’ll have you know that my shelf contains vehicles from the armies of the ROK, Lebanon, Czechoslovakia and not one but two from the JGSDF. I also have plans to build an Angolan BM-21 so

But yeah, I do tend to stick with what I know and love. Saves on paint and decals!