How about just popped and somewhat askew? Be a shame to hide all that work you did on the floor. Have you finished with the rust? I ask because it seems from the photos that the color is pretty uniform. Might look better with some variation of the rust color.

Since you put all that work into the interior, you should keep it visible. Play around with it, see what you like best. You can go from just partly askew, to completely blown off, or anywhere in between. There a plenty of photos in this thread you can use for inspiration, so try a few and see what you like. If you are not sure, post some photos of the positions you like and see what others say.
Ken

Thanks guys. I’m still playing with the colours. Hard to pick up with a phone camera. But using chalks I’ve ‘mottled’ the colours somewhat. Added some whites to represent ash. I think you could fiddle for a long time on the colours. Some of the images I’ve looked at have ‘sharp’ edges to the rust colours while others have nice gradients. So no one right way. If I started to spray again I would put on a wider area of burnt orange.
Also internet images may have been taken the day after or weeks after the tank was destroyed. With time the rust fades.

thanks for the feedback.

An update. I’m getting a bit browned off with this project. I’m getting mental blocks as to how to finish it off.
I’ve built the base. (Small roadside diorama with the T72 in the ditch. Fire that burn the surrounding bushes).
Here’s the mock up. Nothing is glued down except for the road base. Gravel/stones etc.
White ash etc to be applied.

Detail still to be added to the T72 and the ditch and bushes.

What’s the feedback? Am I wasting my time or does anyone think it will ‘work’? 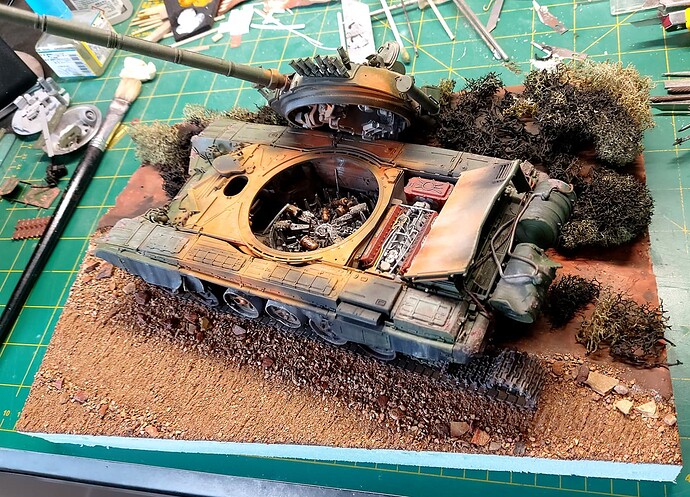 I think that’s the job done. You have a good believable position with the turret, the detailing is great and you get to see the turret inside and the destroyed hull fighting compartment.

The little display base just completed it. Nice and simple but has the real effect.

Only thing I would do, is tone down the engine colours, maybe some soot or a grime wash …

The inside of the fighting compartment does look very good with the chalk powders mixed into pastes. It’s all done really well

OK folks enough is enough. As I have mentioned I’ve burnt out on this project. Pun? Any way I cobbled together enough to sit on the shelf. I may comeback at a later date and finish off some more details. More smoke affect. Finish the base etc etc. (Does anyone believe that? Does anyone go back and finish a build?)

Some thoughts. The kit is a nice kit and given time I would love to built a full T72 again. They are ugly brutes that have character. Instructions are somewhat vague. Aren’t they all? Not knowing how armor ‘works’ makes decisions harder. Not knowing what burns or melts makes it harder. Not knowing what goes ‘bang’ makes getting the destruction believable.
I looked at a zillion images of destroyed armor and no two where the same so I sort of ‘winged’ it with some steps. The colours were an issue.
I’ve enjoyed detailing the engine. Destroying the rubber side skirts. Note some of it I replaced with ‘real’ rubber. I’ve enjoyed finding something that looks like burnt ash. (Plaster of Paris with a small touch of black chalk in it). All the paint is AK. Everything is weathered with chalk.

I’ve been sick a lot during this build and I lost the plot a few times. So continuity was an issue. But in the end I just decided that I had started something crazier than my skill level should have attempted. Lesson learned.

Thanks to everyone who followed along.

My next project will be a freelance job that no one can say is ‘wrong’.

Anyone interested can follow along in the Automotive threads. It will be a hack of one of MiniArts kits. (See below). A Ford Model A which is a Gazz and then a part of the German military and now a surfy wagon!!! Fantasy!!! https://forums.kitmaker.net/t/1-35-scale-surfy-wagon/23332

Thanks to those who gave their feedback. It was all very helpful. 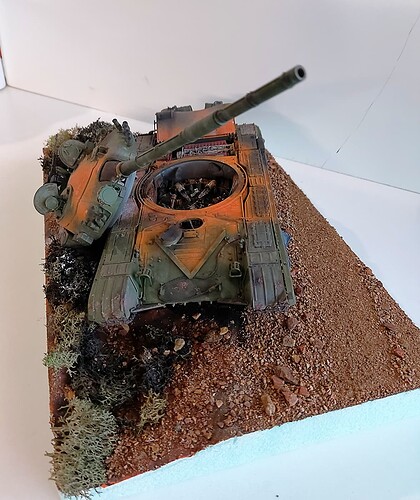 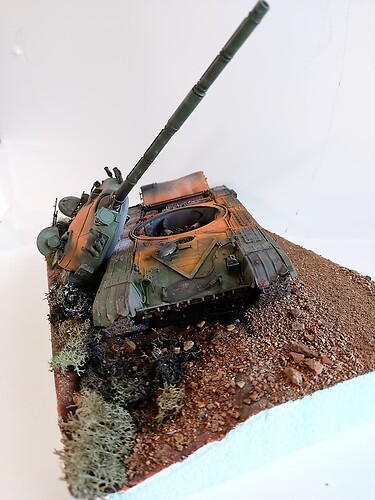 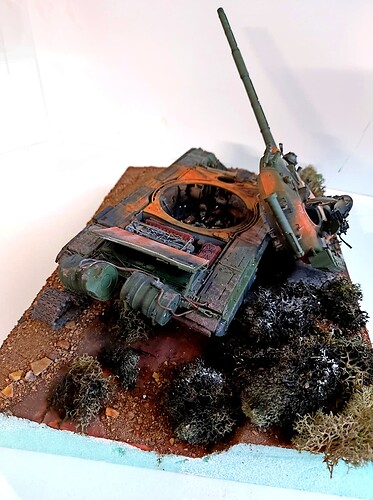 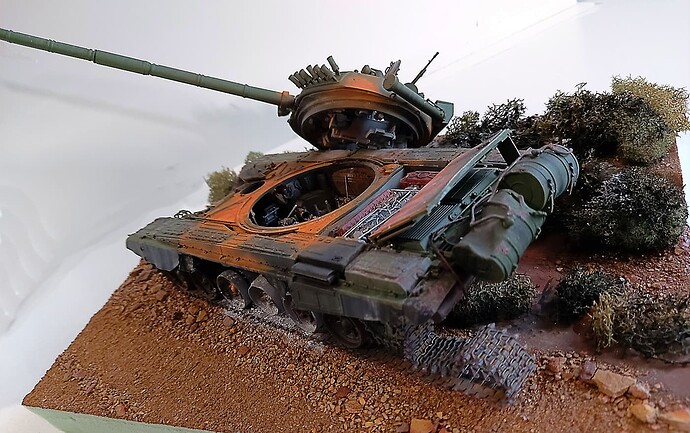 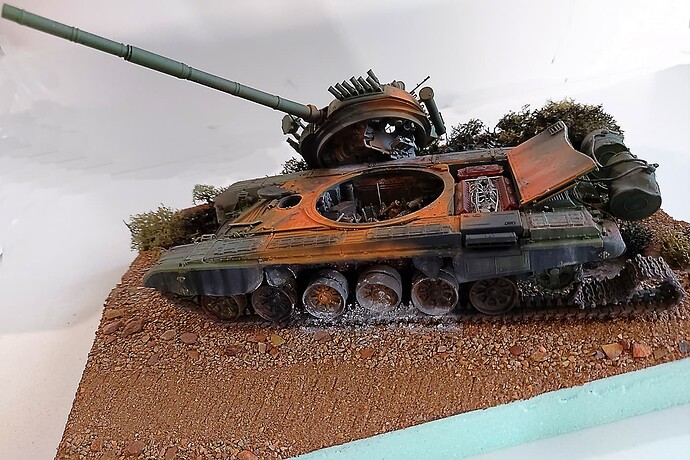 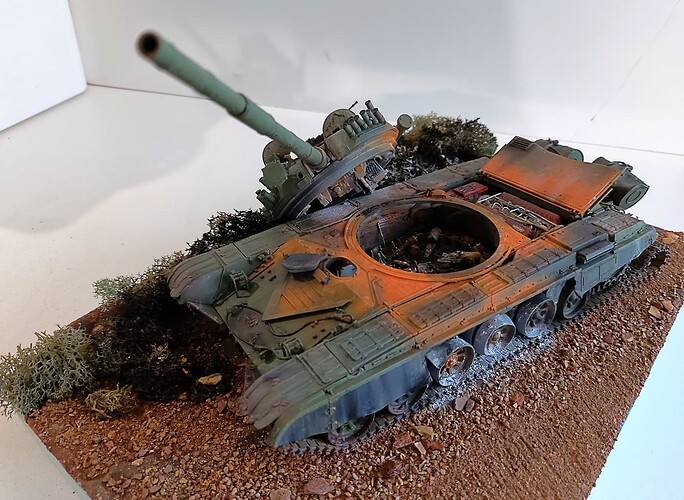 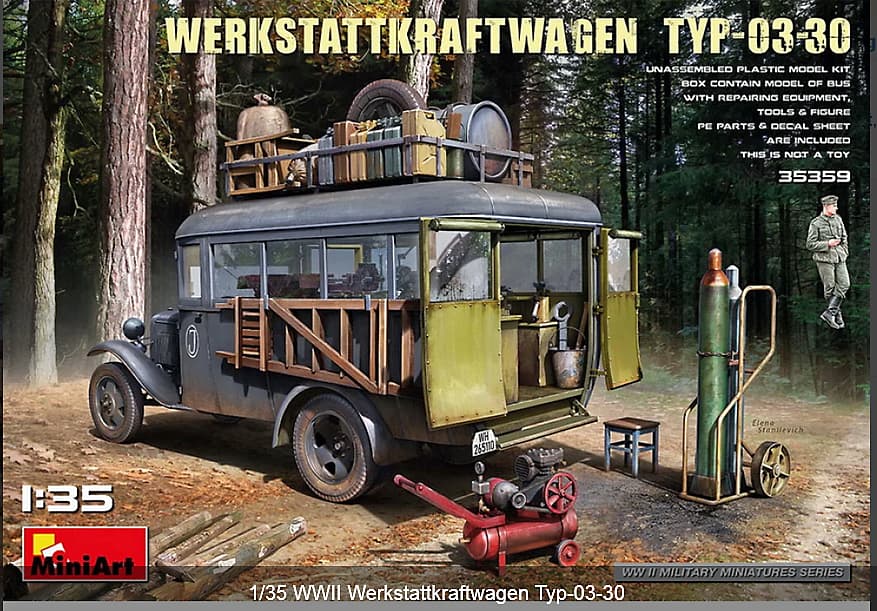 Cracking result for a first effort. I’m sure all the things you learned along the way made the trip worthwhile in any event.

Thanks Armorsmith. I should have put some more thought into it before I started. I haven’t finished it yet. It’s sitting on a shelf here waving at me so I don’t forget it!!

Ah man that Werkstattkraftwagen kit is my nemesis hahahaha.

Ive got PMSD - post Miniarts stress disorder after tackling that. So many bloody parts! Will be well over a year on the bench as i do a few hours on it, leave it, do something else until I forget how not fun or funny it is and then go back to punish myself for another couple of hours.

I think it is looking very good. The blast and rust colouring is very nice. I would be very happy with it buddy. One Q though, what is the belly plate on the hull detailed like ? I am thinking of doing a real crazy build which involves cutting the wagon in half and pretending its 2 wagons submerged after falling off a pontoon/bridge one being turret up, and the bottom half upside down showing the belly plate ?

I can’t tell you if the belly plate is good or bad. I simply don’t know what it should look like. Sorry.

and the bottom half upside down showing the belly plate 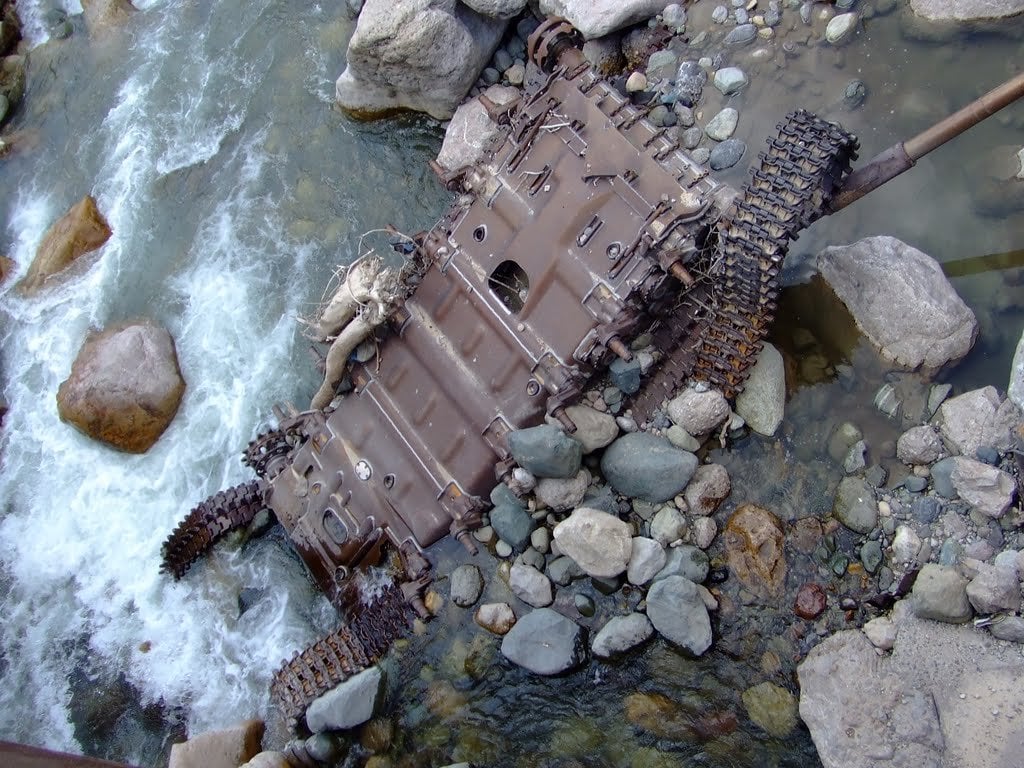 It turned out SWEET!!!

Do what you did, ask questions. Thats the best way to learn. Third:

I looked at a zillion images of destroyed armor and no two where the same so I sort of ‘winged’ it with some steps. The colours were an issue.

Like you said, no two are the same, so anything you do is correct, as long as you think it looks good or “correct”. Last:
If I am getting burned out on something, I set it aside and work on it later. I think a lot of people do. The big question is, how long is “later”? A day, a week, a month? Thats up to you to decide. Try looking at it next week, see how you fell about it. If you think its done, its done. If not, do a little more to it.
Ken

OK a quick update.
Sitting unfinished on the shelf annoyed me. So a bit of a sprint to make it half decent!!

Just ‘stuff’ and some weathering. (Not the ‘stuff’ on my work desk).

Now back onto the shelf! 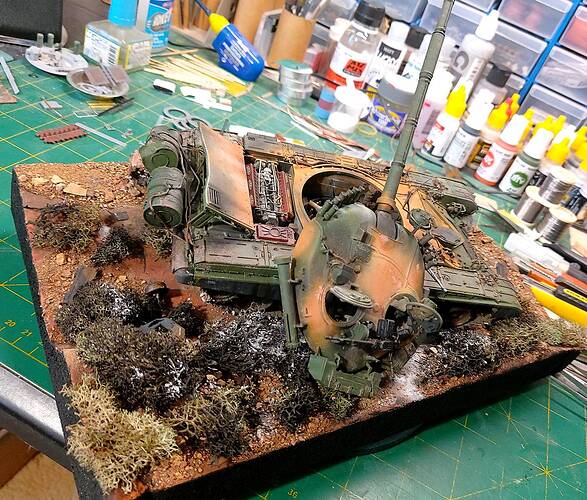 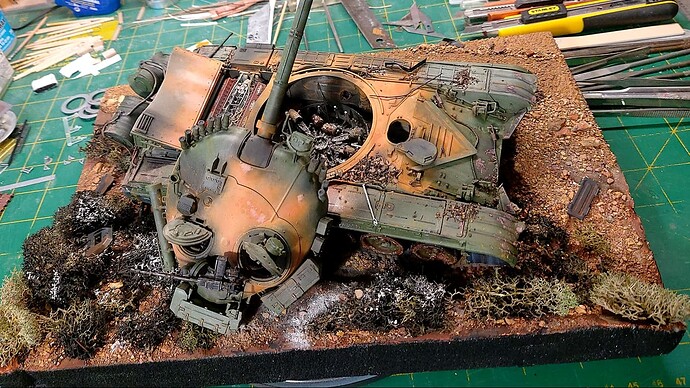 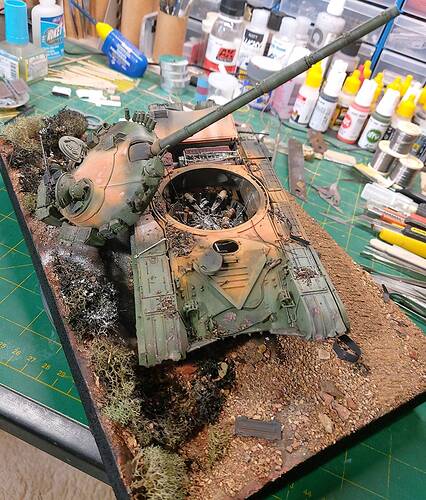 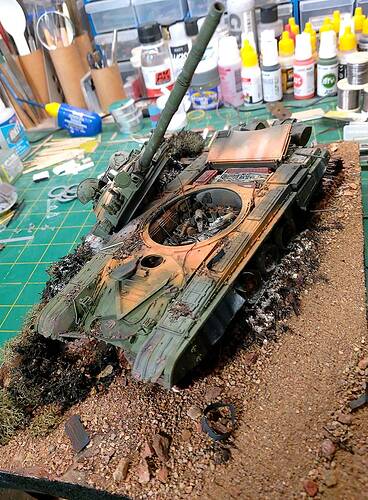 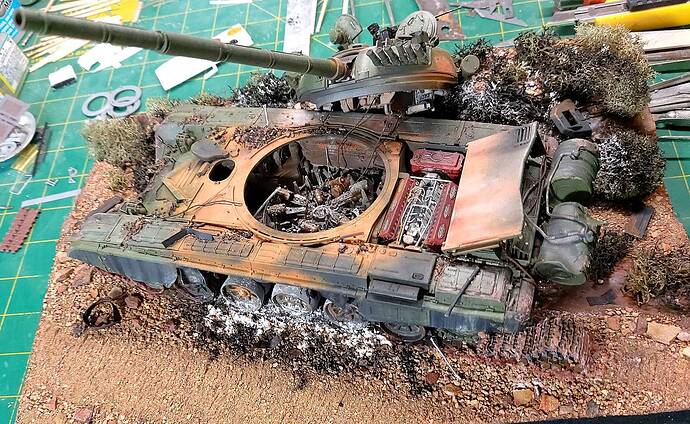 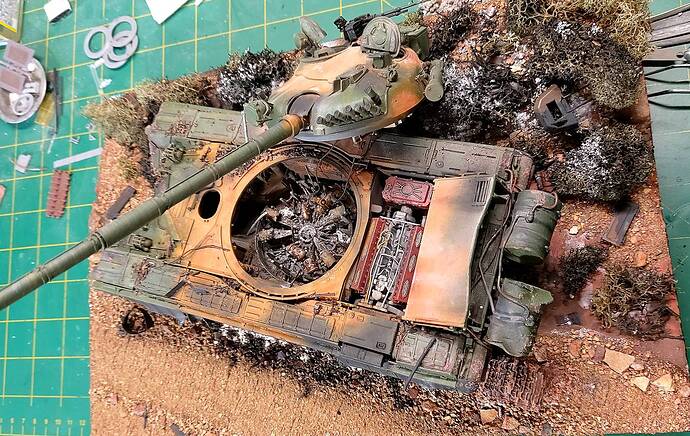 I think it looks great!
I would add a little more black scorching/soot to it, but that is my opinion, and someone else may feel different.
I certainly think you accomplished what you set out to do.
Ken

Bruce, although you doubted how this was going to turn out, you have really produced a fantastic and detailed build in the end. The painting, weathering and finish combined with the ground work are terrific and a kit to be proud of.

And its a prime candidate for …

Built kits of all Vehicles from the current Ukraine War

Ken after I posted the above images I went back and added some more black areas. Great minds think alike!!!