I lost my maternal grandfather in November 2019 aged 95, not long before I took up model building. He was a fighter pilot in the RAF joining in February 1943 commencing his training in Canada, before returning to the UK in 1944 and then to Italy in 1945. He also spent time with the USAF 337th Fighter Interceptor Squadron flying F86D Sabres in the early 50s and flew the Hunter during the Radfan Conflict for which he recieved the DFC. He retired as a Group Captain in 1979.

Consequently he has flown a wide variety of iconic aircraft which presents the ooportunity to not only model some of these gems, but also serve as somewhat of a personal tribute to him. I’ve had this project in mind for some time, but have waited for my skills to rise to a reasonable level to do this justice (that said I’ve been armour modelling mainly, rather than aircraft so far). I now also have access to his log books between February 1943 and August 1971.

My plan is to build an example of every plane type he flew, so this will be a long term project, especially given my build speed! Having gone through his logbooks the below are aircraft he flew. Whilst a fighter pilot, during his career he has had the opportunity to fly other types of aircraft. Whilst I will probably concentrate on the fighters and trainers, I have included transports etc. and a few helicopters where his log book records him as 2nd pilot and/or dual flight, but not where he’s been only a passenger.

Since I have the logbooks I will replicate exact aircraft, certainly aircraft numbers etc, as well as camouflage etc where I can. I’ve listed against the aircraft below where I already have kits. I intend to build mainly 1/48 scale where I can for fighters and trainers, with probably 1/72 for larger aircraft, but happy to go up or down in scale where necessary (already have from the kits I have!). If anybody has good kit recomendations for any of the below, please post suggestions.

Can only help with a few as the others are outside my wheelhouse. For the 86D it depends on the tail section if a early or late. @Tank_1812 thanks, some great suggestions. Re the F86D I suspect the early given he was over with the 337th in Massachusetts in 53/54 I believe.

What a great idea, and sounds like a top bloke. I bet he had some remarkable memories… Will be keeping tabs on this one. Well done for doing it

I am sure his logs said F-86 but the years are a little later otherwise that timeframe suggests F-89. Do you have the serial number/plane number from the logs?

@Johnnych01 He certainly did. Something I think common to his generation.

This is his obituary which summarises at least some. There is at least one inaccuracy in there though. The particular Radfan conflict incident referenced in the obituary I believe happened on 30/04/64 rather than the 29th as there is a letter in his log book from Major de la Billière which states as such. There are lots of other photos etc. folded in the log books which I can post alongside the relevant builds as I get to them, if anybody interested.

@Tank_1812 looking at his log books, my earlier post was out slightly in terms of dates. He was in the US from the tail end of July 1954 starting training in the T33A on 6th August 1954 at Westover, Massachusetts.

He then spent the rest of the year training in Floridaat Tyndall, before returning to Westover at the end of January 1955 where he remained until returning to the UK in late August 1956.

He completed over 616 hours in the F86D according to his log books. Below is one log book page with some serial numbers: 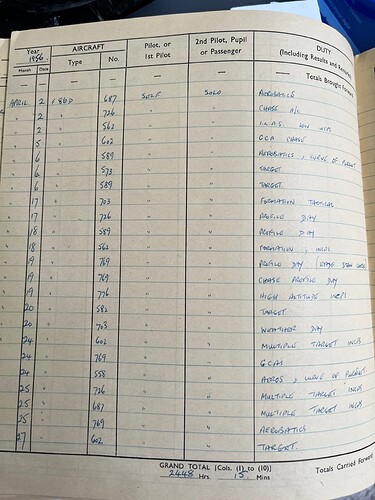 Below is a photo from a newspaper clipping in the log books that suggests F86D. My knowledge of the aircraft involved isn’t sufficient to correctly ID the plane from the canopy view. 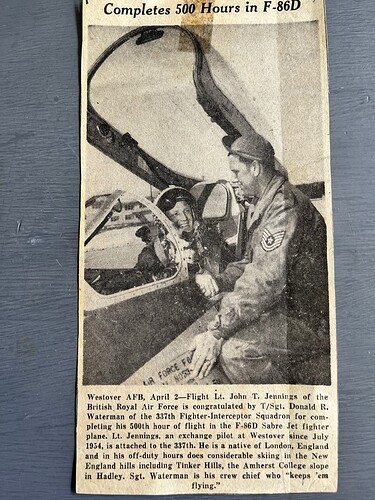 There is another clipping earlier in the log book suggesting he was attached to the 60th at Westover, then the 337th? 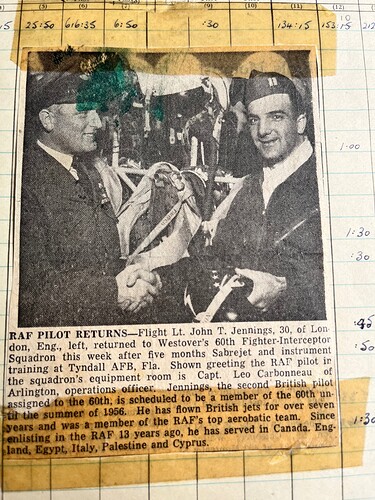 this is an amazing story, good luck with your long term project.

According to this review.
http://modelingmadness.com/scott/korean/86dpmpreview.htm

“Serial number buffs will want to knowthat F-86D-45 serials start with 52-3898 so any that are earlier and prior tothe IRAN overhaul that added the parabrake, will be applicable for this kit.This particular overhaul was started in July 1954 and all aircraft so modifiedby September 1955 under Operation Pull-Out”

So you want the late kits, Revell 04553 or Academy’s reboxings.

These clips about his career are really interesting reading… I liked the bit about his desire to fly probably cost him more promotions …a dedicated pilot for sure.

Thanks @Klaus-Adler and @Johnnych01 looking to get the first build started on Monday.

@Tank_1812 thanks for the info re the Sabre. Will have a look at both those kits. My knowledge of the Sabre is limited so your info will really help trying to replicate some of the aircraft he flew as accurately as possible.

So I’ll start the first build of this project Monday as working over the weekend. Starting with the De Havailland 82A Tiger Moth.

His log books suggest he flew the DH82A first in February 1943 as part of his grading course at No 7 EFTS (Elementary Flying and Training Schools) at Desford. However there are no serial numbers for these first flights so I’ve looked so later flights out of No 4 EFTS Brough. By this time he had already amassed the majority of his training to date in the Fairchild Cornell and DH Harvard.

I’ve decided to replicate R5063 flown solo on 8th May 1944. I’m not certain what the numbers in the note sections refer to. 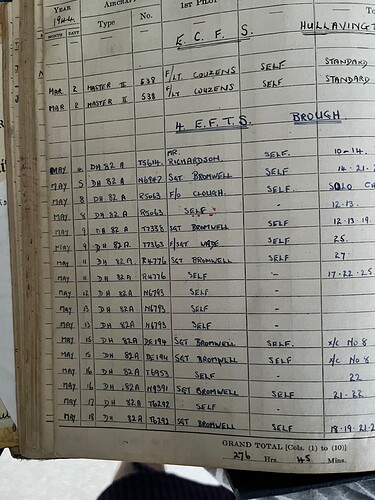 Whilst a search on the internet has uncovered some of the other aircraft, these mostly relate to those still in private ownership. I can’t therefore be confident the current paint schemes/camouflage are an accurate reflection of what they would’ve been at the time. However for R5063 I have located the following photo courtesy of nederlandseluchtvaart.nl: 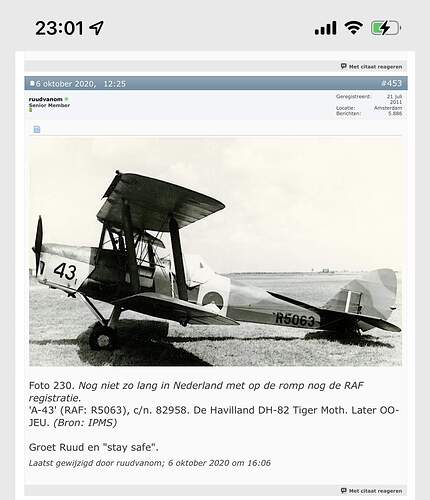 Further info online shows that R5063 was constructed in 1944 with the construction number 82958. It is currently registered as N4942 and privately owned in Mendon, NY, USA.

In between the RAF and it’s current owner it was with the Royal Netherlands Airforce where it was registered as OO-JEU.

The above photo still bears R5063, but the rounded looks similar to Dutch airforce roundels. I’m assuming this photo was taken shortly after transfer therefore, after they’d changed the roundels, but before they had a chance to change the serial number. The camouflage in the photo is the same as the second scheme in the ICM kit so I’m reasonably confident to go with that scheme. I’ll just cut some masks to change the serial numbers to R5063 and the nose number to 43. 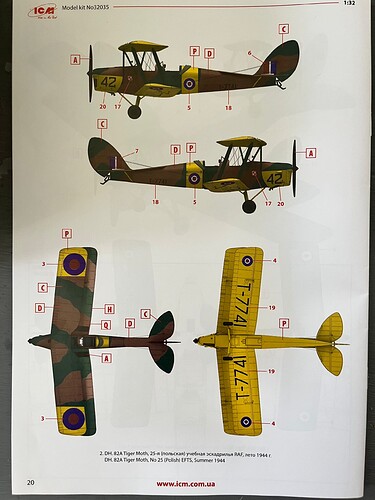 Making a start on the first build. Not only is this my first aircraft build, but also first ICM kit. Looks like really clean molding with no hints of flash. Only cons in reviews I’ve read is that the cockpit detail is a little lacking, so picked up some after market courtesy of Eduard. 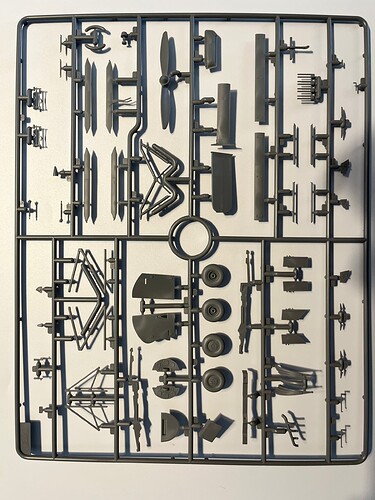 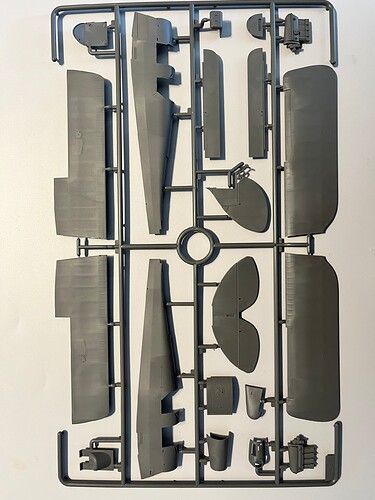 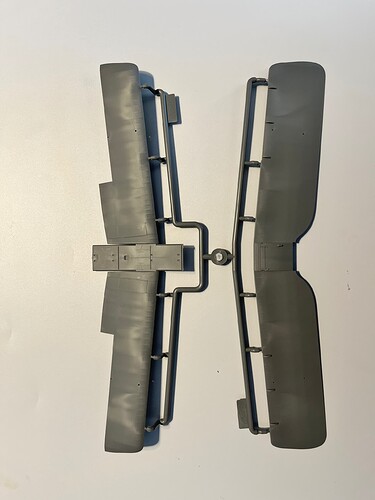 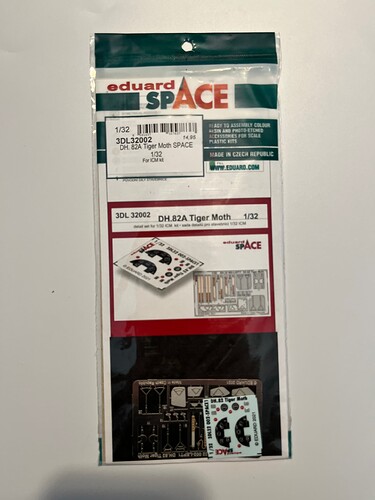 Also comes with some figures which look nice. 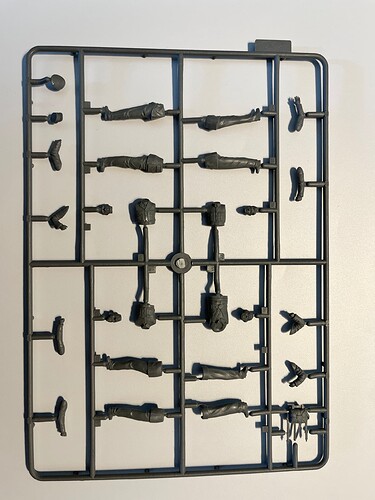 So far so good. Added a small amount of PE to the cockpit. Instructions suggested straight Tamiya XF5 green for the interior, but that seemed a bit too well, erm green. Went for a mix of Tamiya sky XF 21, flat green XF 5 and field green XF 65 in a ratio of 3:1:1. 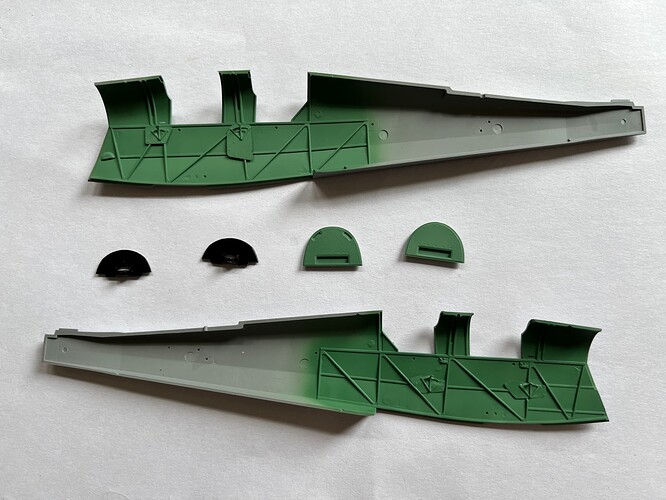 Added a pin wash with a mix of Abteilung 502 sepia and burnt umber. 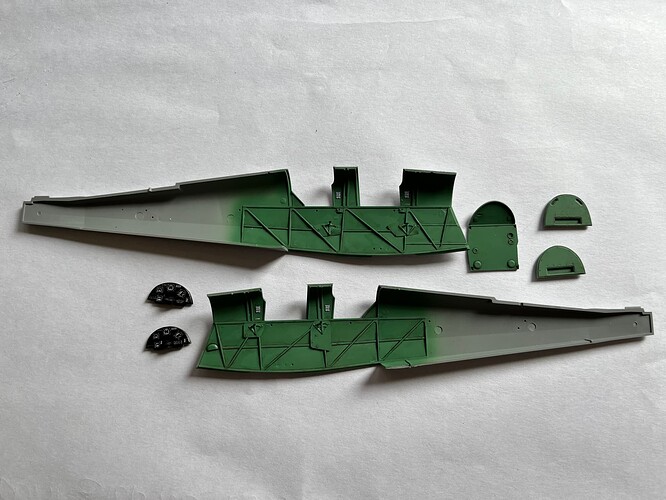 I opted for the 3D decals, after quick clean and sand of the existing molded details. First time I’ve used them and surprised how quickly they came off the carrier sheet. They didn’t seem to want to adhere to the instrument panel even with setting solution, but a bit of Modge podge sorted that issue. 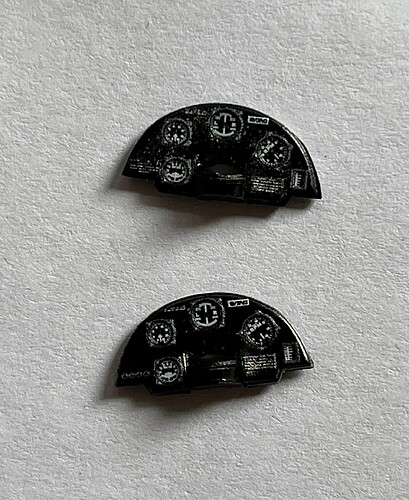 Lastly joined the two fuselage halves together. Instructions called for threading through the rigging first. Will be interesting keeping that untangled. Also might make fixing the seem line along the top of the fuselage a bit tricker, particularly on the nose. 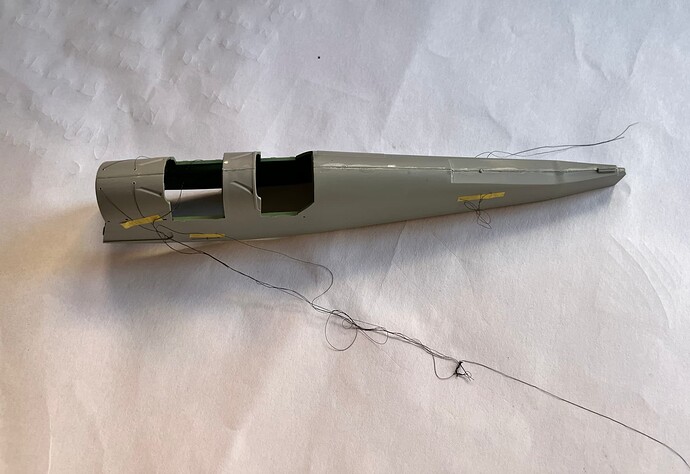 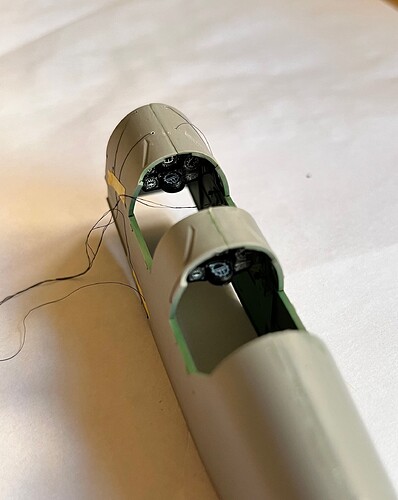 Not a huge amount of modelling this weekend as enjoying the sunshine and making beer. However managed to get the engine made. Nice detail. If I can work out a way to display it with the engine cowling removable etc. then will weather it a little. 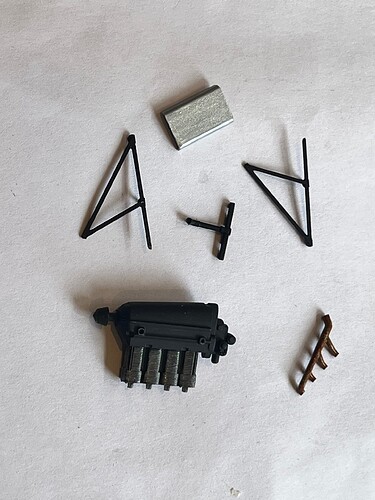 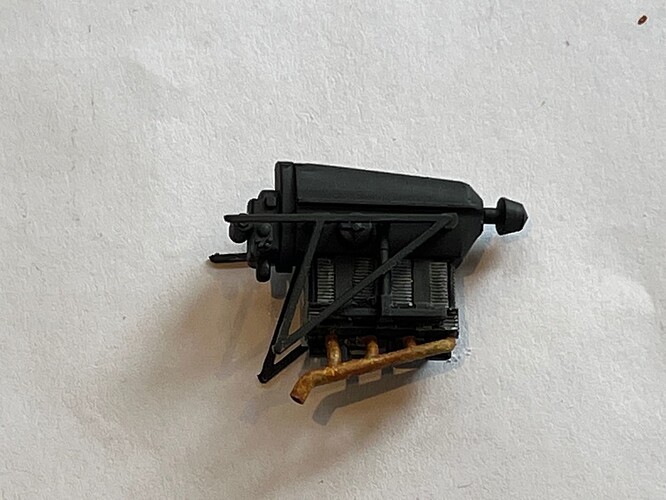 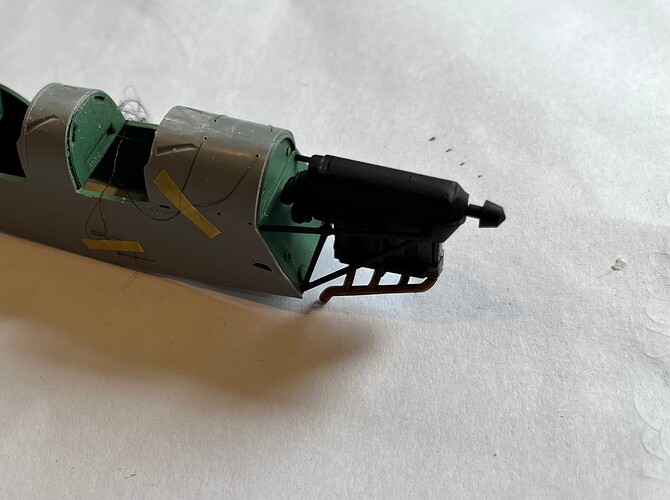 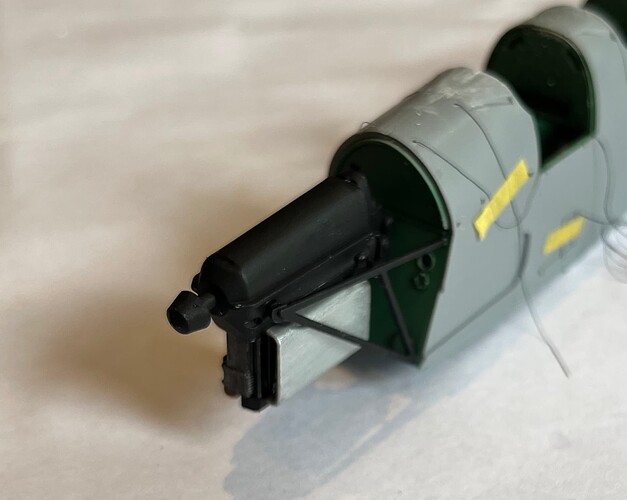 Not wishing to nitpick , but Tamiya only produce a B Mk IV and an FB Mk VI. 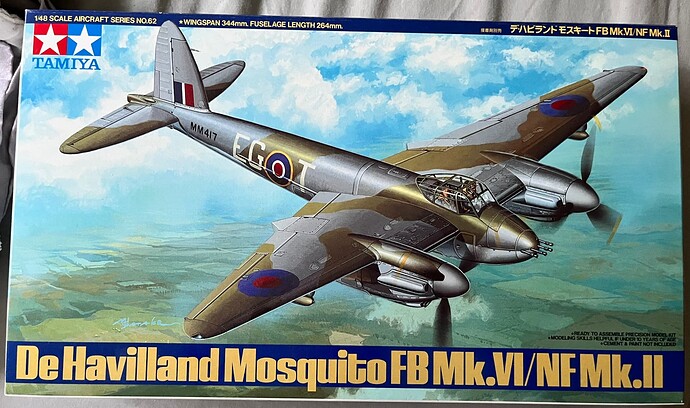